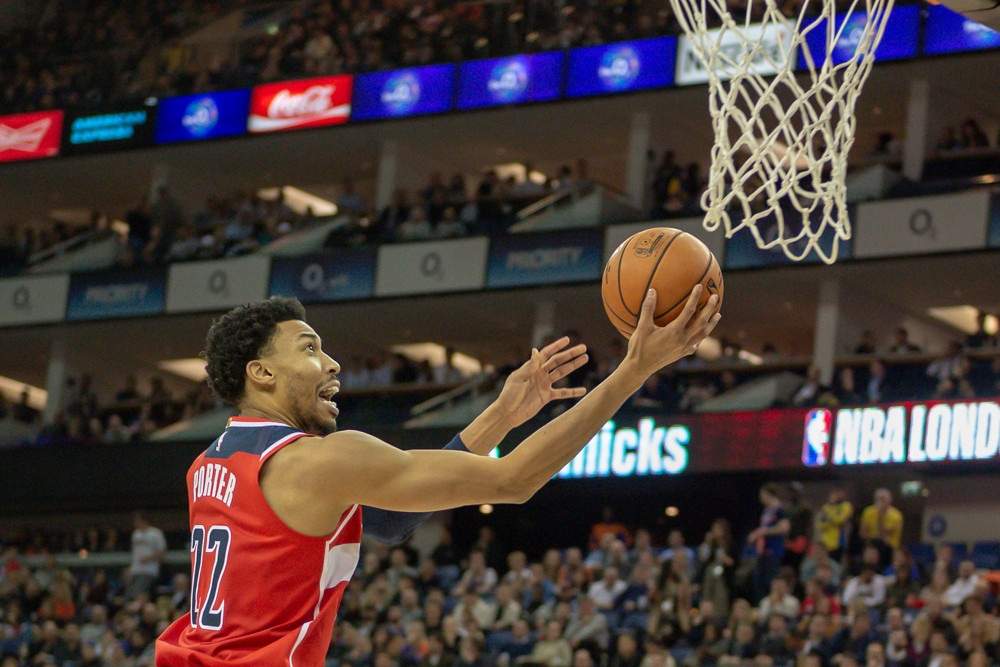 The NBA trade deadline has come and gone. Since the start of the season, a total of 29 trades have taken place, 22 of them since the Porzingis blockbuster on the final day of January. A lot of dominoes came from the Anthony Davis saga that will continue into the offseason. But what was really interesting (and probably most impactful) fantasy-wise were the deals that took place between the top teams in the East. Philadelphia, Toronto, and Milwaukee all loaded up for a deep playoff run while the rest of the East mostly stood pat. Man, imagine how bad the East would be without the Atlantic division.

Quite a few of today’s trades have fantasy basketball implications for the rest of the season, which is why I made this list. Here are some of my biggest winners and losers of the 2019 NBA trade deadline, and what it means for their fantasy value moving forward.

JV’s 6.5-year tenure with the Raptors has finally come to an end, but he moves into a very favorable situation in Memphis. Valanciunas’ per-36 numbers have always been impressive and he never really got the chance to play a major role in Toronto. JV is an old-school big, which may be a reason he was held back. But over the past couple of seasons, he’s worked to incorporate some range into his jumper. He’s never averaged more than 28.2 minutes per game in Toronto, that is likely to change in Memphis.

Marc Gasol now leaves Memphis along with JaMychal Green, so JV looks to be the benefactor of all those minutes. Memphis has nearly 30 shots per game that need to be redistributed following the deadline. Valanciunas was averaging 8.6 attempts in just under 19 minutes per game. I would expect at least 10 shots and 25-30 minutes per game are in store for him to close out the year. JV is only 26 years old, and the Grizzlies look intent on making him a part of their future.

Chicago is finally moving on from Portis and Parker, and get a versatile wing they’ve been coveting. Porter was having a rough season in Washington, and now gets a fresh start in Chicago where he’ll be one of their cogs for the foreseeable future. Chicago essentially upgraded Justin Holiday to Porter, and he’ll likely pick up most of the near 35 minutes Holiday was getting. Looking at the Bulls long term, their core seems set with Zach LaVine, Porter, Lauri Markkanen and Wendell Carter Jr. to go with their draft pick this summer.

Porter is a nice buy-low candidate post-deadline with a chance at more minutes and less reliance to score in the Windy City. He’ll likely contribute more on the defensive end as well as focusing on returning as a premier perimeter shooter for the rest of the season. Outside a bit of a drop in the points department, Porter looks like he’ll get a boost nearly everywhere else statistically. He’s been playing better as of late and I expect him to get closer to his pre-season projections even though he likely won’t fully reach third round value. He’s a nice target for owners looking to buy at the fantasy basketball trade deadline.

The Clippers turned into sellers real quick, first shipping Tobias Harris to Philly and followed it up with Avery Bradley. But the Clippers also brought in an interesting piece from their cross-town rivals. Zubac enters a situation where Marcin Gortat is bought out and Tobias, Boban Marjanovic and Mike Scott are traded. Zubac and Harrell look to inherit the big man minutes, while SGA gets a vote of confidence with the team shipping Bradley.

It looks like Harrell will keep being a top-30 fantasy asset as one of LA’s young building blocks. He should be regarded as such in your league’s trade talks. Shai Gilgeous-Alexander’s value could take a bit longer to even out into consistent performances. He’s been playing well the last couple of weeks putting up top 100 value in 9-cat leagues. Zubac looks like a nice waiver wire pickup for week 18. He played well for the Lakers leading up to the deadline. The path to minutes looks much clearer for him in Clipperland.

One of the indirect winners from deadline day is Luke Kennard. He’s a little less talked about and probably not worth gambling on in less than 14-team leagues. The Pistons moved both Stanley Johnson and Reggie Bullock, essentially clearing up over 50 minutes per game of playing time. Kennard looks like he’ll inherit a nice chunk of those minutes. What he does with them remains to be seen.

To put it simply, Kennard is a shooter, and he’s going to see the same struggles young shooters see in their first seasons. He’s a career 43% shooter and a 54.6 TS%, but he’s nailing 1.3 threes per game in just 20 minutes. If you’re not worried about the shooting percentages, Kennard can be a nice pickup. He’ll be linked to Donovan Mitchell for the rest of his career, but he’s got a chance to make some noise for the rest of the season.

Man, the Sixers are stacked. Two All-Stars, one former All-Star and a player who would be playing next Sunday had he been in the East. Unfortunately, there’s only one ball, which means these guys will likely sacrifice some of their individual performances. Adam King covered all the bases as to how the situation in Philadelphia could look moving forward from a fantasy perspective.

I expect Harris to take the biggest hit. His 20.9 points are going to be tough to replicate with the amount of star-power. He is set up nicely to see an increase in threes and in FG%, though his points and rebounds will take a hit. With all the defensive attention prioritizing Embiid and Butler, Harris will see the opponent’s third-best defender leading to easier matchups.

Butler will also take a hit, which isn’t great considering he hasn’t been healthy either. His fringe 20 points per game look to take another hit down to the 17’s and he’ll lose some boards. Although his assists could get a little bump with so many options to pass out of for easier baskets.

Ben Simmons could also take a hit in value, though it shouldn’t be as much as Harris or Butler. Simmons will likely be limited to scoring through fast breaks and relegated to the fourth option in Philly. Like Butler, he’ll likely see a boost to his passing numbers and FG% with the addition of Harris.

If you want to know more about the fantasy outcome from the Tobias Harris to Philadelphia trade, I encourage you to check out Adam King’s analysis on the blockbuster deal.

Marc Gasol is heading to Toronto which means one of the Raptors bigs are likely to suffer. Ibaka looks like he’s heading back to the bench as Gasol should inherit the starting spot. Gasol brings a lot to the table, and his inclusion in the lineup shouldn’t affect Siakam enough to be worried. It’s also not impossible that Gasol’s value suffers a bit from this move.

Ibaka is having a career year. Though I don’t expect him to be a dud ROS, I do see minutes being shaved for the newcomer. If there’s an opportunity to sell him in your leagues, I’d take it now. You might be able to sell him for 75 cents on the dollar now, but it’s better than giving him up for even less if he does end up struggling in the future.

Mirotic was an awesome get for the Bucks playoff battle. But no bueno for fantasy players not named Giannis. The biggest name to suffer would likely be Brook Lopez. Lopez is having an amazing year and is arguably the Bucks’ best three-point shooter this season. Mirotic likely comes in and cuts into his playing time, especially if the Bucks go to a smaller lineup.

The Bucks’ duo of Eric Bledsoe and Malcolm Brogdon will likely need to relinquish some shots for their new forward. Bledsoe could see his assists take a boost with Mirotic knocking down corner threes. Brogdon’s scoring likely takes the biggest hit. He’ll remain a decent source for threes, but I’d expect him to hover closer to top 100 value rather than top 80. If you can throw him in a deal and get a nice piece in return, now is the time.

Lastly, Mirotic himself could take a hit in production. Though I’m sure Mirotic owners would just be happy to see him hit the floor, his averages of 16.7 points and 8.3 boards will be hard to maintain. The boards should go down with Mirotic playing more on the perimeter. But this move might see him reach the 3 threes per game mark. I’d expect closer to top 50 value rather than the top 35 player he was earlier this season.

Going the other way to Washington is Portis. Portis has always been somewhat of an overachiever in Chicago. Washington traded Markieff Morris, leaving his 26 minutes per game behind. Portis might start his Wizards tenure coming off the bench, but could eventually find a starting role down the stretch. The only problem is that there are a lot of heads to feed in Washington. Portis has to share time with Jeff Green, Trevor Ariza, Jabari Parker, and Thomas Bryant.

Jabari Parker is his biggest obstacle to consistent minutes. No real word on his role either makes it tough to fully project. That makes Portis a riskier add or target for a trade. On the other hand, his upside is a nightly double-double type guy. It’s hard to gauge what Washington’s plan is, rebuild or fight for the playoffs. Portis had a much clearer path in Chicago with Parker in the doghouse and Wendell Carter injured.