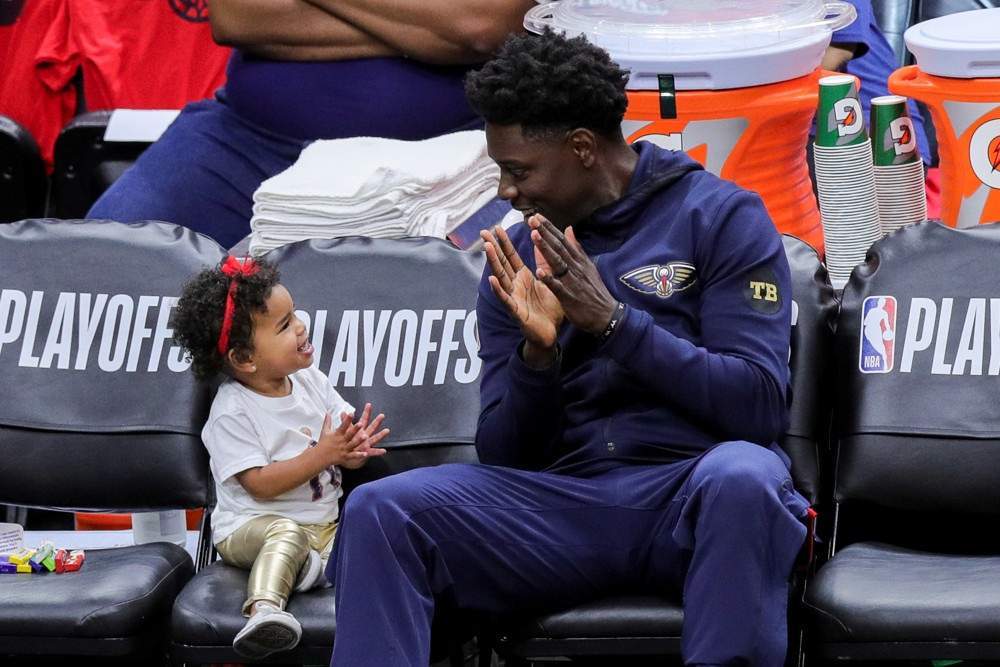 I know you’ve read far too many fantasy basketball articles telling you which players you should sell high and whom to buy low.

So I won’t bore you with another one.

Today, I’m going to suggest three players, flat out, that you should be targeting in trades. It doesn’t mean they’re underperforming or overperforming; just a list of guys I think can improve your team and be acquired at a reasonable cost.

After all, it’s the season for giving….and taking a little, too.

Jrue Holiday gets no respect. I don’t know what it is, but when you come across the “Top 10 Point Guards” debates strewn all over Twitter, Holiday’s name is too often omitted.

Maybe it’s the mythical injury-prone stigma? He played in 81 games last year, and in 2016-17 he only missed three games after he returned from helping his wife Lauren battle through cancer. So that’s false. If not the injuries, maybe it’s simply because he’s overshadowed by Anthony Davis. Either way, Holiday is a stud — he’s in the top 30 in 9-category leagues this year after finishing in the top 25 last year, and he’s trending up.

I own Holiday on a few teams and sent out some offers where he was part of a package I was sending away, and no one would bite. That makes me think you could do the opposite, and try to acquire him on the cheap. Just make sure you click on the right “Holiday” and don’t mistake him for one of his 17 brothers.

Adams is another guy, like Holiday, that gets no fantasy love despite putting up even better numbers than he did last year.

It’s a new season, and the 25-year-old New Zealander continues to block shots (1.0 per game), shoot the lights out (59.5 FG), and provide elite steals (1.5) for the position. However, the biggest boost we’ve seen has been in his scoring, which he’s increased by one full point, and his rebounding, which has gone up by one full board. Even with his poor free-throw shooting, he’s just inside the top 50 players overall right now.

Despite Adams being on every billboard and bus in town, many owners don’t value him like the higher profile centers. As evidenced by some of the trades I’ve seen go down in my leagues, it’s worth seeing if you can get him at a fair price.

Admittedly, I’m not the biggest Jayson Tatum fan from a fantasy point of view. His numbers are just BORING. However, as we’ve seen in the past from players like Otto Porter, Rudy Gay, and Trevor Ariza, not everyone on your team needs to average 25 and 10 to make significant contributions.

Tatum, in his sophomore season, is literally doing the exact same stuff he did in his rookie campaign: a little scoring, a little rebounding, a little defense, some threes, and really good percentages. His numbers won’t pop out at you, but he does nothing to hurt your team, making him the perfect roto league “balancer”, i.e. someone who can offset a roster with a couple of high-volume, low-percentage shooters.

Early on, Tatum’s field goal percentage was a drag, dropping his overall value out of the top 50, but in the last two weeks he’s shooting 48.7 percent, and with all the other goodies, that’s led to a No. 37 ranking in that span, according to Basketball Monster. The Celtics’ forward’s season scoring is at 16.3 points per game, up from 13.9 in 2017-18, and his rebounds have increased from 5.0 to 6.5 per contest, which are both impressive considering Gordon Hayward is back in the fold.

Lots of fantasy owners endured Tatum’s early-season struggles and were lamenting their decision to draft him with a high pick, so now could be a good time to pounce if they haven’t yet noticed his improvements.