Let’s start this Fantasy Baseball Waiver Wire Report with a music video of a new song from one of my favorite bands: The Offspring.

On top of this being an extremely catchy song, the title “Let the Bad Times Roll” also describes the 2021 fantasy baseball season perfectly. The letters IL and DTD are becoming commonplace next to what feels like half the players on every single team we have. These unfortunate letters have all of us scrambling to the waiver wire more than we would probably like, but we have to do what is needed to remain competitive in our leagues. This week, there are plenty of intriguing options available headlined by a major power bat. So crank up the volume, listen to some new Offspring music, and check out this week’s report.

He’s back! After missing 10 days with a fractured middle finger, he’s given opposing pitchers the middle finger in his first two games back, launching a home run in each contest. These last two homers have pushed O’Neill up to 10 on the season in just 32 games. Some quick math has him at a 50-homer pace when playing this season. Not too shabby. These haven’t been wall scrapers either with six of the 10 classified as no-doubters.

Yup, Tyler O'Neill is BACK.

All of O’Neill’s quality of contact metrics are even more impressive. O’Neill has barrelled 21.1% of his batted balls (99th percentile) with a .651 xSLG (100th), .606 xwOBACON (95th) and is also 87th percentile or better in average exit velocity, max exit velocity, hard-hit rate, xBA, and sprint speed. His atrocious plate discipline will always keep his AVG in check, but O’Neill can provide a major power boost for fantasy squads with solid counting stats as well. This type of power bat has no place sitting on the waiver wire.

Following a trade from Tampa Bay to Milwaukee, Willy Adames now becomes fantasy relevant again. Why? Well, let’s take a quick look at his home/road splits during his four seasons in the Major Leagues.

Those home/road splits are noticeably different. Adames hits for a much higher average on the road with more power and a better plate approach. Now, Adames goes from a bottom-10 hitters park in Tropicana Park to a top-10 hitters park in Miller Park. On top of that, the quality of pitching isn’t that great in the NL central with two of the top-3 arms in the division (Kyle Hendricks and Luis Castillo) struggling mightily this season. Adames is off to a hot start with his new team, accumulating seven hits in his first six games with a double, home run, and as many walks as strikeouts (4/4). If you need some middle infield help, Adames is a solid target that is likely sitting on your waiver wire right now.

There are a small group of players that are never season-long fantasy options but always find their way into a fantasy baseball waiver wire report or two every season. Brad Miller is certainly one of those players. Injuries on the Phillies have forced Miller into regular playing time and the 31-year-old, nine-year veteran hasn’t disappointed. In 104 plate appearances, Miller has slashed an impressive.305/.365/.505 with five home runs and three steals. That batting average is a bit surprising given the fact that Miller is a career .243 hitter, but the power is not surprising in the slightest.

When called upon, Miller has always displayed above-average power, combining for 20 in 341 plate appearances in 2019 and 2020. That remains the case here in 2021 with a 54.7% hard-hit rate, 93.5 mph average exit velocity, .463 xwOBACON, and 9.4% barrel rate. It looks like Miller will continue seeing regular playing time in the short term, so give him a look as a fill-in that can provide solid power while being eligible at two or three positions depending on your league settings.

Part of the Fantasy baseball waiver wire is picking up players who are hot and riding those hot streaks. And without question, Garrett Cooper is on a hot streak right now. Over the last two weeks, Cooper is hitting .441 (15/34) with three homers, nine RBI, seven runs, and five walks. On the season, his 50.5% hard-hit rate puts him in the 88th percentile while his 114 mph max exit velo is in the 92nd percentile and 90.5 mph average exit velo in the 72nd percentile. All three of those are also career-best marks. Cooper is hitting the ball well right now and can serve as a viable fill-in at first or in the outfield while your starter is on the IL.

Another hitter on a hot streak right now is Pavin Smith. I’ve been debating adding Smith to this article in each of the last two weeks and his current hot streak finally tipped the scale. Smith is currently on an 8-game hitting streak where he’s hitting .406 with a home run, five RBI, four runs, and three walks. His last four games have all ended with at least two hits in the box score. 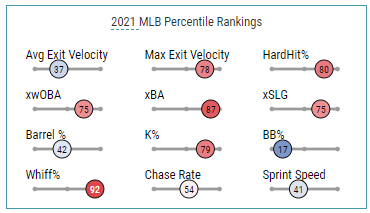 When you look at his savant page, there are plenty of encouraging metrics. Smith ranks in the 75th percentile or better in max exit velocity (78th), hard-hit rate (80th), xBA (87th), xSLG (75th), xwOBA (75th), strikeout rate (79th), and whiff rate (92nd). He’s never going to be someone you build your fantasy team around or even draft as a starter, but Smith was a .281 hitter in the minors with a .364 OBP and has the power to flirt with 20 home runs over a full season.

Looks like it might be time to pick Ty France back up of the waiver wire. The 2021 season started with France slashing .289/.386/.464 in April, but he went into a major funk after his hot start and eventually landed on the IL with a wrist injury. But since his return, France looks more like the early-season France we all were enjoying, racking up seven hits in five games. Even through his struggles earlier this month, France’s plate discipline has improved. His walk rate has risen from 7.1% in 2020 to 9.9% this season while the strikeout rate dropped from 23.9% to 20.9%. France is capable of posting some .280/20 seasons while being eligible at multiple positions on some platforms.

When you go to Baseball-Reference or Fangraphs and search “Luis Garcia”, you’ll get approximately 1.3 million results. But for fantasy purposes right now, only one matters and that’s the one down in Houston. Garcia has quietly been piecing together a very strong season here in 2021. The 24-year-old Venezuelan right-hander has posted a 2.93 ERA, 1.02 WHIP, 8.6% walk rate, and 29% strikeout rate over 46.0 innings.

While Garcia’s fastball has been average to below-average this season, the rest of his arsenal has been impressive. His cutter, slider, curveball, and changeup all have a BAA under .200 and a whiff rate above 36% with the last three all above 40%. Opposing batters haven’t even recorded a hit off his curveball yet. Garcia has it all working right now and will stay in the rotation even with Jose Urquidy, Jake Odorizzi, and Framber Valdez back in the mix, which bumps Cristian Javier to the pen. As long as Garcia is in the rotation, he needs to be rostered in fantasy leagues.

How the bleep is Shane McClanahan still available in so many fantasy leagues. As I’m writing this, the rookie southpaw is available in 60% of Yahoo leagues, 40% of CBS leagues, and 78% of ESPN leagues. Yes, I get that going four or five innings every start isn’t exactly ideal for win or quality starts, but these are quality innings he’s throwing right now. Through his first six starts, McClanahan has a 3.29 ERA, 1.13 WHIP, 6.5% walk rate, and 29.6% strikeout rate. That 23.1% K-BB rate puts him 21st in baseball among starters with 20+ innings this season.

McClanahan has been succeeding thus far mostly on the strength of his filthy slider. Averaging 90.2 mph, McClanahan’s slider currently has a .160 BAA, .224 wOBA, 47.9% whiff rate, and 31.2% putaway rate. He’s been throwing the pitch nearly 50% of the time and it’s not difficult to see why. McClanahan’s xERA of 3.10 is actually a bit lower than his surface ERA as well. You’d like to see more consistency and effectiveness from his curveball and changeup, but what he’s doing is working right now and needs to be rostered in more fantasy leagues.

Make Sure These Players Aren’t Available

Framber Valdez (SP – HOU): Made his return last night and is a potential top-40 arm ROS.

Casey Mize (SP – DET): Recommended Mize last week and all he’s done is have two more good starts since then. It really appears that he’s turned things around.