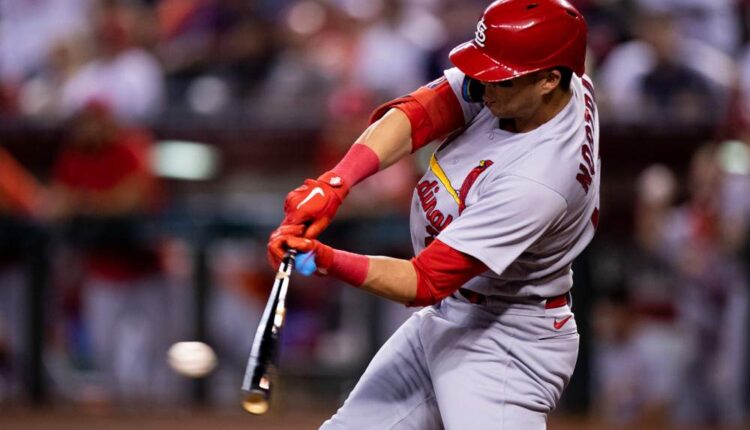 Another week, another Fantasy Baseball Waiver Wire report here on FantraxHQ. Regardless of what style league you play in and what point of the season it is, we should always be looking to improve our fantasy teams. Whether you’re looking to catch the next red hot breakout, find an injury replacement, or improve in a specific statistical category, the waiver wire can help you accomplish all of those. This week’s report features plenty of outfielders, another Cubs arm, and a few specialized targets.

What if I told you that Lars Nootbaar is 7th in wOBA over the last 30 days? You probably wouldn’t believe me, right? Well, it’s true. In addition to that .436 wOBA over the last month, Nootbaar also has an excellent .305/.450/.585 slash line with four home runs, 14 RBI, 20 runs, and a pair of steals. Even more impressive than that is his 21.1% walk rate compared to only a 13.8% strikeout rate. While Nootbaar’s surface stats haven’t picked up until recently, he’s posted a high walk rate all season to go along with an 11.1% barrel rate, 43.7% hard-hit rate, and a chase rate below 20%. He’s also settled in as St. Louis’ regular leadoff man against RHP and still sneaks in the lineup against southpaws. If you need outfield help, Nootbaar is a great target right now.

Another fantastic outfield target this week is the bearded wonder, Jake Fraley. While his time in the Majors has been tumultuous to date, Fraley has kicked it up a notch of late, showing considerable improvements in several areas. Over the last 30 days, Fraley has cranked six homers with a .339/.425/.677 slash line, 14 RBI, and 16 runs scored. That’s certainly impressive and will be the reason why you pick him up this week, but what has me equally as excited is the 13.7% strikeout rate over this time which equals his walk rate.

Fraley has always demonstrated a solid power/speed blend and walk rate, but had struggled a bit with strikeouts up until this recent hot stretch. He’ll get some dames off against tougher left-handers moving forward, but Fraley has served as Cincinnati’s leadoff hitter against RHP and should keep that role as long as he continues showing this well at the plate.

Oh look, another outfielder. While Jake McCarthy isn’t going to provide a boost in power as he has a .391 SLG and .092 ISO over the last 30 days, he most certainly will make an impact with his legs. McCarthy has swiped seven bags over the last 30 days while hitting .299 with a 10% walk rate and 11% strikeout rate. His contact rates and xBA don’t signal that he’ll hit around .300 ROS, but McCarthy’s speed impact is legit and who doesn’t need a little speed in their life at this point in the season? Even if he’s closer to .260 ROS, that could come with another 8-10 steals and a serviceable amount of runs and RBI.

At this point of the season, sometimes all you need is a quick categorical fix. With McCarthy, it was speed. With Harold Ramirez, it’s batting average along with solid R and RBI contributions as well. Due to his helpful yet boring contributions (AKA lower power/speed), Ramirez was dropped in many leagues when he hit the IL with a right thumb fracture right around the all-star break. Since returning on August 16th, Ramirez has played in nine of 10 games for Tampa Bay and has at least one hit in all nine of those games. Overall, he’s 13/39 with six runs, nine RBI, and one dinger during his nine-game hit streak. Ramirez is a great source of AVG that can provide decent R and RBI production while mixing in a homer and steal here and there.

Speaking of hitting streaks, Bryson Stott is on a seven-game streak of his own and has added two steals during the streak as well. After a slow start to the season, Stott has picked it up over the last 30 days (102 PA), hitting .299 with a home run and four steals. He’s not walking much (3.9%) over this timeframe or providing much power (1 HR, .124 ISO), but the AVG and SB can help fantasy teams with dual eligibility being an added bonus.

After my Justin Steele recommendation worked out so well two weeks ago (he’s still under 40% rostered by the way), let’s go back to the Cubs this week with Drew Smyly. Over his last five starts, Smyly has recorded a 2.57 ERA, 1.11 WHIP, and 24.6% strikeout rate with a .229 BAA. Maybe his pitch usage alteration has something to do with the recent surge. Smyly has increased his sinker and curveball usage to a combined 90.2% while only throwing his cutter 9.8% of the time, which is probably a good thing after the pitch got pummeled in July. After a road start in Milwaukee this weekend, Smyly is lined up to face St. Louis on the road, Cincinnati at home, and then three straight road starts against the Mets, Marlins, and Pirates.

If you’re looking for more of a flashy, upside pitching grab this week, Cade Cavalli should intrigue you. The top-100 prospect has long been considered one of the best pitching prospects in the game thanks to three above-average to plus offerings. However, his command and control haven’t always been as consistent as we’d like. Cavalli has had a fine season in Triple-A this year with a 3.71 ERA and 1.18 ERA through 20 starts, even lowering his walk rate recently. After posting a 10.5% walk rate through June, Cavalli has dropped that to a much more manageable 8.3% clip since July 1st. The strikeouts have also ticked down a bit but Cavalli has the arsenal to provide plenty of strikeouts with ratios that shouldn’t hurt you. I’d expect him to get plenty of run ROS as well with Washington far out of contention.

Cade Cavalli looks DOMINANT so far. Two strikeouts in the first, both on sliders and hitting 99 on the gun. Here's one of those 99s here. 🔥🔥#Natitude pic.twitter.com/o6ZYnieVmX

For all you save chasers out there, Pete Fairbanks is an obvious and immediate add this week. After a rough few outings in June to start his season, Fairbanks has been lights out since the start of July with a 0.00 ERA, 0.46 WHIP, .107 BAA, 3.4% walk rate, and a 44.8% strikeout rate. He’s racked up four saves and four holds overall this season including two earlier this week in back-to-back games against the Royals. With the Rays, nobody is ever locked into the closer position, but Fairbanks is at least in the mix moving forward and is absolutely dominating right now.