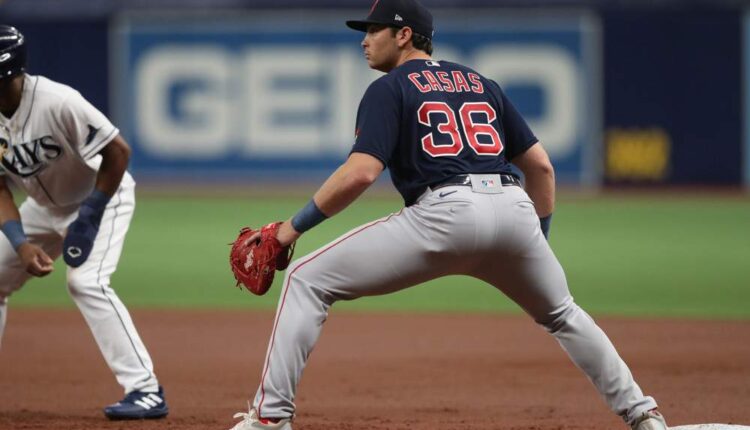 Another week, another Fantasy Baseball Waiver Wire report here on FantraxHQ. Regardless of what style league you play in and what point of the season it is, we should always be looking to improve our fantasy teams. Whether you’re looking to catch the next red hot breakout, find an injury replacement, or improve in a specific statistical category, the waiver wire can help you accomplish all of those. This week’s report features some exciting prospect promotions, resurgent veterans, a young exciting LHP, and two players with the last name Brown.

Out of the two big-name prospect promotions this week, I’m leaning to Josh Jung for ROS value. After missing the first four months of the season recovering from a torn labrum and subsequent surgery, Josh Jung returned with a bang, cranking six homers in 23 Triple-A games with a .273/.321/.525 slash line. This after a dominant showing in 2021 where he slashed .326/.398/.592 with 22 doubles and 19 home runs in just 78 games. Jung has one of the highest floors of any hitting prospect in the game right now thanks to his plus hit tool, plus power, and sound approach. The Rangers have no reason not to play him regularly down the stretch which gives Jung plenty of appeal in 10+ team leagues. Jung wasted no time making his presence felt, socking a home run in his first Major League at-bat.

If you miss out on Josh Jung, Triston Casas is a solid alternative. The hulking corner infielder is only off to a 2/18 start through his first five games, but one of those two hits left the yard. Casas offers similar upside to Jung, showing an above-average hit tool and better than plus raw power in the minor leagues. That raw power hasn’t translated into gaudy HR totals quite yet, but this is a 30+ homer bat down the road that can provide a solid AVG and counting stats with some power ROS while playing close to full-time in Boston’s lineup.

We transition from a couple of young guns to someone who has been around the block a time or two in Elvis Andrus. Just when we thought Andrus’ was finished, he gets acquired by the Chicago White Sox and used as their regular leadoff hitter in front of Jose Abreu, Eloy Jimenez, Andrew Vaughn, Luis Robert when he actually plays, and others. In 18 games with the White Sox, Andrus is hitting .298 with four homers, two steals, 17 RBI, and 12runs scored. While I’m not confident in the AVG remaining close to .3oo, Andrus is deserving of a look in 12+ team leagues given his recent production, ability to contribute across the board, and favorable lineup spot.

In very quiet fashion, Jake Fraley has been one of the best hitters in baseball since the All-Star break. In 117 PA since the break, Fraley is slashing a robust .297/.385/.584 with eight home runs and a pair of steals. He’s also vastly improved his approach since the break with a 12.8% walk rate and 17.9% strikeout rate. On top of all that, Fraley’s SwStr rate is down to 8.9% and we’ve seen his contact rate jump above 80% since the break as well. These are all tangible improvements and offer hope that this is more than a simple hot streak. He’ll sit against a tough left-hander, but Fraley will likely play in at least 75% of Cincinnati’s games moving forward as their regular leadoff hitter against right-handers.

While it might have taken a bit longer than anticipated, Lane Thomas is finally producing as a fantasy-relevant outfielder of late. Over the last two weeks, the Nationals’ outfielder is hitting .321 with three homers, a steal, eight RBI, and 10 runs scored, and has a .279/15/5/11/3 line over the last month. Thomas has also trimmed his SwStr rate to 8.8% while keeping his strikeout rate in check at 23.7%. The Nationals don’t have any better options to start down the stretch so Thomas should continue to be penciled into the lineup on a regular basis and offers an intriguing power/speed blend for fantasy managers.

Honestly, I was moderately surprised when I saw that Seth Brown has a chance at a 25/10 season, currently sitting at 22 homers and eight steals with a month of games remaining. Brown has consistently displayed solid quality of contact metrics with a 12.5% barrel rate, 41.6% hard-hit rate, and .424 xwOBACON, and he already has four homers here in September with a .719 SLG and .406 ISO. If you need a power boost, Brown can do that for you. And yes, that was my attempt at working the UPS slogan into this.

While the AVG is within striking distance of the Mendoza Line, Cal Raleigh is currently embarking on a powerful journey in the month of September, filled with plenty of four-baggers. Raleigh has already cranked four homers in six September games and five in his last eight games bringing his season total to 23. Only Daulton Varsho has more among catcher-eligible players with 24. His quality of contact metrics back up his power surges as well with an impressive 14.9% barrel rate, 91.1 mph AVG EV, and a 43.1% hard-hit rate.

If you can’t snag Cal Raleigh off the waiver wire, Eric Haase is a fine backup plan. Haase is hitting .313 over the last month with four home runs, 11 RBI, and nine runs scored.

I’m not quite sure why Nick Lodolo is still available in nearly 2/3 of leagues, but let’s try and change that today. Over his last five starts, Lodolo has posted a 2.43 ERA and 0.78 WHIP in 33.1 innings with a 4.8% walk rate, 30.6% strikeout rate, and .177 BAA. That 25.8% K-BB rate ranks 9th best in baseball among qualified pitchers during this timeframe. Lodolo has proven to be an elite source of strikeouts in the Major Leagues, ranking among the league leaders in k%, Whiff%, and Chase%. He lines up to face Pittsburgh, Boston, Milwaukee, and the Cubs over the next few weeks.

One of my top 10 pitching prospects, Hunter Brown enjoyed a solid MLB debut on Monday, tossing six innings of shutout ball with five strikeouts against the Texas Rangers. He allowed only three hits and one walk in the outing. This comes after four highly-impressive months in Triple-A where he posted a 2.55 ERA and 1.09 WHIP across 106 innings with a 31.5% strikeout rate. Walks have been a slight issue for Brown in the minors, but not to the point where he’ll be forced to move to the bullpen long-term. It’s looking like the Astros will give him at least another start or two, maybe more, and Brown has two incredibly juicy matchups on the horizon with Detroit on Monday and Oakland next weekend.

The Red Sox season might be circling the drains, but we can still find fantasy value here over the last month of the season. With Houck on the IL, Boston really hasn’t been able to establish any consistency at closer. However, John Schrieber has stepped up lately, converting each of Boston’s last two save opportunities while pitching well all season. In 56.1 innings this season, Schreiber has posted a 2.08 ERA and 0.89 WHIP with a 29.7% strikeout rate while ranking in the top 4% of pitchers in xBA, xSLG, and xwOBA.