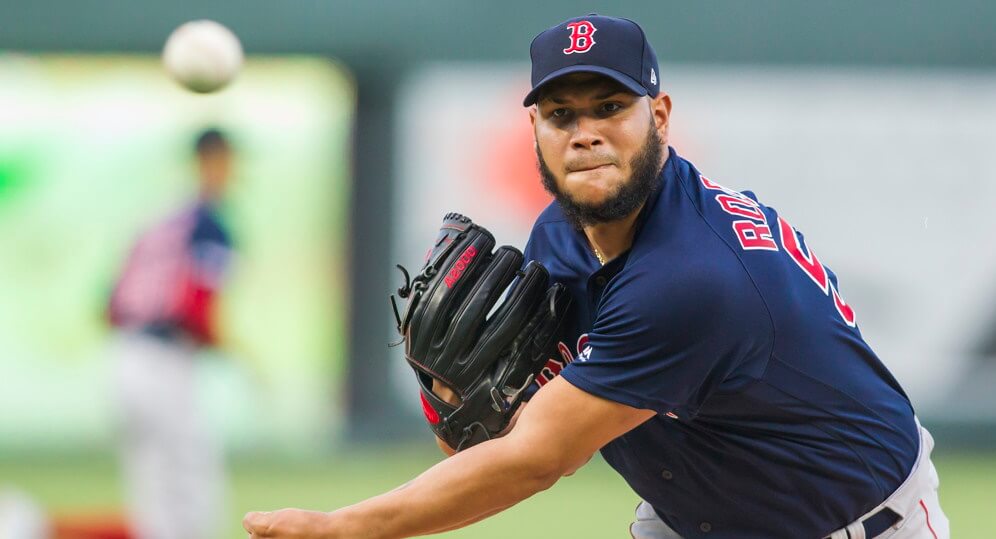 Much of fantasy sports is about player assessment and trying to determine a player’s performance in the future.  With the first-half of baseball officially in the books, now is a great time to take a closer look at players who could make a big splash moving forward.  This week, I’ll focus on some pitchers — one veteran, one young buck, and one prospect — who are all primed for a second-half surge.

It’s understandable if you took a casual glance at Eduardo Rodriguez’s 5.19 ERA and 1.33 WHIP and moved right along.  But if you scratch a little deeper under the surface, you’d notice that he actually hasn’t been pitching that poorly.  At the moment, he has a 27.6% strikeout rate, 5.7% walk rate, and a 28.7% CSW rate — all career-bests.

So why the bloated ERA and WHIP?  Let’s take a look at his pitch mix.  According to Baseball Savant data, Rodriguez relies mainly on his fastball, changeup, and cutter.  This season, his changeup has been less effective, generating a 28.3% whiff rate compared to 37.1% in 2019.  Additionally, his cutter is getting hit hard, with a .308 BA and .487 SLG against it.

Why will Rodriguez surge?

Unluckiness plagued Rodriguez’s first-half of the season.  Expected metrics indicate Rodriguez has performed better than his current stat line.  Outside of his slider, all of his pitches have an xBA below .235 and an xSLG below .400.  Rodriguez also has a .353 BABIP — 48 points higher than his career .305 mark.

Expected stats aren’t predictive, but they can be useful in painting an overall picture of a player’s performance.  Rodriguez’s performance looks mighty unlucky to date, so I expect a second-half surge.

Full disclosure:  I can’t resist pitchers with solid strikeout rates and high groundball rates.  Enter Patrick Sandoval.  Sandoval likely wasn’t on many fantasy radars to start the season.  A cursory glance at his 2019 and 2020 seasons shows a pitcher with a combined 5.33 ERA and 1.36 WHIP across 76 innings.  Yuck.

Why will Sandoval surge?

Sandoval’s 2021 season is different than his previous two seasons.  Since entering the rotation in mid-May, Sandoval has a 3.86 ERA and 1.22 WHIP, as well as a 26.2% strikeout rate, 53% groundball rate, and 31.2% CSW rate.  Additionally, Sandoval has allowed three earned runs or less in all but one of his nine games started; he’s also pitched at least 5 innings in all of those nine games.

Sandoval has a solid five-pitch arsenal, with his changeup being his money pitch.  According to Baseball Savant data, his changeup generates a 52.6%(!) whiff rate, and hitters have a .125 batting average against it.  His slider isn’t too shabby either, generating a 41.2% whiff rate and .119 batting average against it.  To further continue the point that Sandoval is a whiff master, his overall 35.3% whiff rate is ranked in the top-6 percent of the league.

We previously dug into Sandoval’s pitch-mix change and concluded he’s a pitcher worth buying into.  Given his quality of pitches (and whiffs!), I expect Sandoval to surge his way through the second half of the season.

Gilbert got off to a bumpy start after being called up.  But since May 31st, he’s settled in nicely, allowing two earned runs or less in seven of his eight games started.  During that span, he’s also posted a 51:10 K/BB ratio in 43 ⅓ innings.

Why will Gilbert surge?

At the moment, Gilbert sports a 3.50 ERA and 0.98 WHIP, as well as a 28.3% strikeout rate and 5.5% walk rate.  He relies mainly on his fastball, and has been successful with his breaking pitches — his slider, changeup and curveball all have a sub-.150 xBA and sub-.265 SLG.  Eno Sarris highlighted Gilbert’s increased spin efficiency with his changeup, noting that the pitch has added more than an inch of horizontal movement to it, ultimately making it more effective.

Despite his limited professional career, don’t hesitate to buy-in on Gilbert.  His ERA estimators indicate a solid rest of season outlook for the top-prospect:

His plus command and use of pitch mix should pave the way for Gilbert to continue to roll (and surge!) in the second-half of the season.