Baseball is back, and it is a glorious day. The lockout is over; Spring Training is underway, free-agent signings and trades are happening. What more could you ask for? With baseball back and the season only starting a week late, it’s time to hit the heart of draft season.

Maybe you are new to Fantasy Baseball, or perhaps you have been playing for a long time. Regardless, this article is for you. This strategy guide will help you learn the basics of a rotisserie league and the more complex strategies to help win your league.

What is a Roto League?

Roto leagues are based on statistical categories. The cumulative stats of your team are weighted against other teams in your league. The better you rank in a category, the more points you will be rewarded. If you play in a 12-team league and finish first in the home run category, you will be awarded 12 points. The second-place team in that category would be rewarded 11 points, the third-place team would receive 10, all the way down to the last place team receiving one point in that specific category. You can see the scoreboard below to get an idea of how it works. Here are specific category standings from the D1S relegation league last season. You can see that Shelly’s team scored the most runs, therefore receiving the most points for that category. Relegation is a 15-team league therefore, 15 points were awarded toward the overall standing. 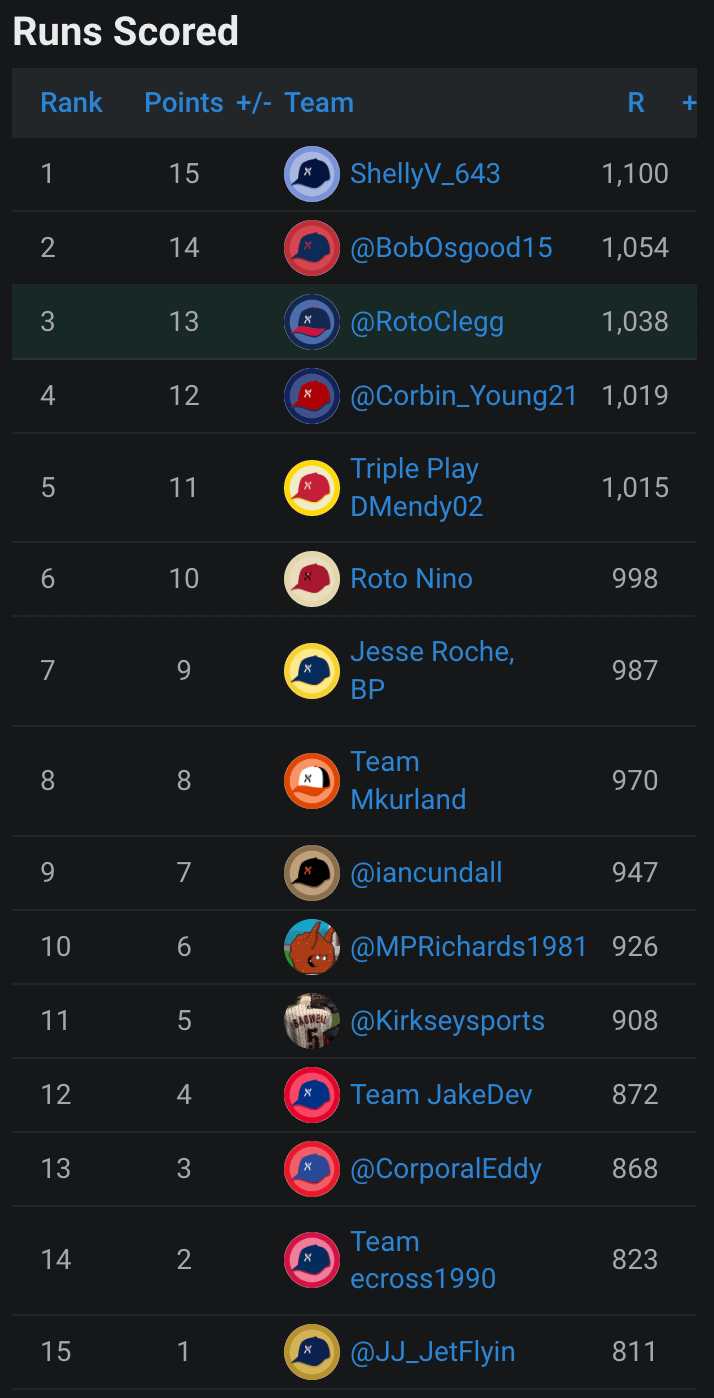 Below you will find the overall standings from that same league. Like runs, each category is given a point value depending on how many teams are in the league. Those point totals from each category are added together to bring you the final standings. Finishing high in most categories will be your recipe to success in roto formats.

The league I listed above is not your standard scoring for roto leagues. While scoring is evolving in some leagues, with many going to OBP instead of batting average, the standard 5×5 scoring has stayed consistent for many years. The traditional five categories are batting average, home runs, stolen bases, runs, and RBI on the hitting side. The five are wins, strikeouts, saves, ERA, and WHIP for pitching.

Luckily, if you play on Fantrax, you have the freedom to customize your league with nearly any baseball stat possible. One of the most essential Fantasy Baseball pieces of strategy advice that I cannot stress enough is to read your league settings and constitution. Know your league scoring and roster settings. I cannot tell you the countless times I have been in draft rooms, and someone makes over 100 picks without realizing it was OBP scoring instead of average. If you want to succeed in Fantasy Baseball, it starts with the basics. KNOW THE RULES!

Standard Rotisserie rosters for Fantasy Baseball have not changed much over the years. Standard roto rosters are two catchers, first base, second base, third base, shortstop, middle infield, corner infield, five outfielders, and a utility spot. Nine pitching roster spots are the standard that you can use with any combination of starters or relievers.

Would I love for the two catcher standard to go away? Absolutely. But that is the standard for most leagues and what we roll with. Be sure to check your league settings. Draft strategy varies significantly between one and two catcher leagues. There is a good chance your roto league could have different roster settings. Know the settings and adjust accordingly.

Cheat sheets are a great place to begin. If you are in a live draft, you will not research fast enough between picks. Be prepared and find a cheat sheet. Or, you can even create your own. Either way, it can be a help to you come draft day.

It is also critical to have a plan. I like to build my draft from the back. If you know your draft slot, you can use ADP to get a decent idea of how you want to build your team. Have a plan, but also be flexible. Not every pick you want is going to fall in your lap, and that is okay. Be willing to adapt and adjust on the fly. Just make sure you have a solid plan going in.

What factors matter in a roto draft? What categories should you target hard early on? Let’s take a look.

The goal of a roto league is to win and accumulate the most points possible. You do that by accumulating points in different categories, as we discussed. I have pulled data from the last three seasons on the NFBC to provide 80th percentile targets for 12 and 15 team leagues. If you can hit 80th percentile targets for every category, you stand an excellent chance to win your league.

Take these target numbers and try to reach each of them. It can be a tall task to hit all these thresholds, but your team should be set up nicely if you can reach them based on projections.

Let’s take a look at an approach to help reach these targets.

Aces are scarce. We have seen the “pocket aces” strategy becoming more popular. “Pocket aces” was popularized by Toby (@batflipcrazy). It means starting your drafts with two starting pitchers in the first two rounds. If both of your aces that you draft pan out and stay healthy, you get a significant advantage on your competition in pitching categories. Aces will anchor your ratios, and you will likely rack up wins and dominate strikeouts. This strategy can work if you are comfortable with the hitting pool later in drafts.

At the end of the draft, I want to come away with at least five of my top 35 starting pitchers. You can find our consensus staff rankings here.

When to draft closers is always a highly debated topic in the Fantasy Baseball community. Some suggest grabbing top guys like Josh Hader and Liam Hendriks and forgetting about saves until later in the draft. Some like to get a top closer and another reliever that has secured the ninth innings. With fewer closers that have set jobs, the price of high-end closers is higher than ever. With the scarcity of saves, it may be worth paying up for.

Others prefer to wait on saves until later. There is no right or wrong answer here. Alex Fast publishes a great piece each season titled: “We are Drafting Saves Wrong.” Give it a read for an in-depth study on drafting saves.

Some years like 2021, you draft the highest closers in ADP, and it pays off. Liam Hendriks and Josh Hader were drafted at an ADP of 57.8 and 58.3, respectively, according to NFBC. Aroldis Chapman, Edwin Diaz, and Raisel Iglesias were drafted inside the top-100 picks. All returned solid value. This does not happen every year, unfortunately.

Hitters consume a large portion of your team in roto leagues. How should you target categories? Does position scarcity matter when drafting? A great place to start is by checking out my top-250 hitters for 2022.

Power for you, Power for everyone

Reports stated that MLB changed the balls in and out all season, so it is hard to know for sure what kind of baseball was being used on a day-to-day basis.

I would not stress about drafting power early on. Focus on other categories that are more scarce, like the one we will discuss next.

This should not surprise you one bit. Steals are down league-wide. Since 2011, steals are down over 30 percent. League-wide stolen base totals have declined every season since 2016.

This leads us to the question of how should we attack stolen bases? Players who steal bases at a high clip get pushed up in drafts. Is it worth paying up for them?

With power in excess and stolen bases at a premium, drafting players who steal bases early is important. Usually, these players also contribute across the board, helping you in all categories.

When those players begin to thin out after the early rounds, I take the “chip-away” approach. Every stolen base matters, especially with how scarce they are. Drafting players who chip away at that total number of steals you need. If a player can give you between 5-10 stolen bases, they are valuable for steals. Those steals add up and help you reach those percentile marks we discussed earlier.

There is no right or wrong way to draft. You can build a great team by starting with a hitter or a pitcher in the first round. Some managers can make it work by waiting on starting pitcher until after pick 100. Fantasy Baseball strategy varies from person to person. Do your research and find out what works for you! Find the fantasy baseball strategy that you can coin your own. Most of all, have fun!