Isn’t this the best time of the year?

The weather is starting to warm up and the baseball season is right around the corner. For those in school, spring break is near, and MLB The Show 22 is almost here as well. Most importantly, though, fantasy baseball draft season is here!

In points leagues, we get to simply draft the best player available, or the player who will score the most points- similar to football. Could you imagine a category league for fantasy football? That would be the ultimate chaos! This may also better reflect “real-life baseball”, as players’ contributions to your fantasy teams go beyond the standard 5×5 categories.

Now that we’ve gotten that out of the way, let us take a look at how players are going to produce from a points league perspective. The most common way to do this is through standard rankings, which generally use a combination of data and gut feeling to try to put the players in order of most value to least. However there may be a different way to look at this process.

What do I mean by this? Instead of standard rankings, I rely on my own manual projections, with a full explanation here. These players may not be the exact order as I prefer them, but it’s important to keep needed objectiveness with the subjective touch of manual projections.

With that, let us get to the rankings! Today, we’ll be focusing on the second base position. This is a position that likely gets a boost in points league, as many of the players here make a lot of contact and are able to get on base. Some get hit hard due to stolen bases not being as critical, but there are a lot of players where this system is a benefit for them.

Following the signing of Carlos Correa, the Twins appear to have one of the better lineups in all of baseball. However, don’t let the addition of Correa overlook what Jorge Polanco brings to that lineup.

It’s really fascinating to watch the overall development of players over time. During the early portions of his career, Polanco established himself as a contact-oriented hitter who would make a lot of contact, but didn’t provide much power. Yes, he “broke out” for 22 home runs in 2019, yet that was during the juiced-ball season, while it took 704 plate appearances for him to get there. The real standout was his .295 batting average; his hit tool was supposed to be his carrying tool.

However, after a down 2020 season where he was a below-league average hitter with an 80 weighted-runs-created-plus (wRC+) and zero power (.096 isolated power/ISO) whatsoever, Polanco made some clear approach changes in 2021. His 32.8% fly-ball rate was the highest of his career, while he pulled more than half of his batted balls (51.6%). This combination is perfect for optimizing your power; pulled fly balls perform much better than non-pulled fly balls.

In fact, 29 of Polanco’s 33 home runs were pulled. Even with the added whiffs (19.7%) as he tried to hit for more power, he still only struck out 18.3% of the time. The combination of sustainable power with limited strikeouts makes him quite a value in points leagues, especially since he can fill in for you at either second base or shortstop. In fact, I’d take him over Correa in fantasy drafts straight up! Regardless of your format, Polanco is a must target, but that is only exacerbated in points leagues.

This is all about knowing your format. In traditional category leagues, Javier Baez, as a potential 30/15 player, is well-considered to be a top-ten second baseman AND shortstop. In points leagues, though, his value is much more complicated.

The story of Baez’s career offensively has been his consistently poor plate discipline. In 2021, it reached new lows. His 44.5% chase rate and 40.5% whiff rate each ranked in the 1st percentile, while his 5.1% walk rate (6th percentile) and 33.6% strikeout rate (3rd percentile) didn’t fare much better. In fact, his strikeout problems are only becoming even more of an issue: 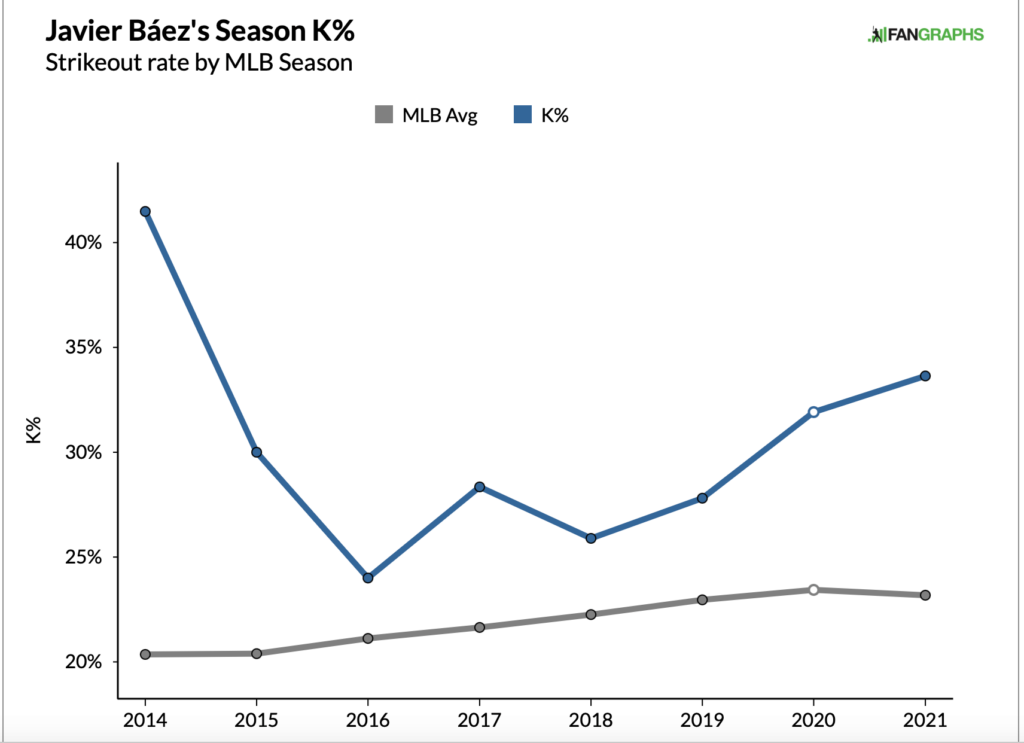 Meanwhile, even his power is a bigger question mark than you may think. As we touched on previously, he is someone who overachieved his expected home run/fly ball rate by a decent margin:

“For the most part, Baez’s fantasy profile is going to be reliant on his power and speed. Unfortunately, there are some reasons to be concerned with the former. Baez’s 28.2% home run/fly ball rate is extremely high. Even with a very high 39% barrel/fly ball rate and the ability to pull his fly balls, it’s going to be difficult to repeat those power numbers.

Baez may have been someone to take advantage of the ballparks he played in. Here are his expected home runs in Wrigley Field (Cubs) and Citi Field (Mets), as long as what it would be at Comerica Park (Tigers):

Detroit has the seventh-lowest park factor for right-handed hitting home runs, per Baseball Savant. As a result, not only should the expected home run/fly ball be a better guide here, but, considering the ballpark he’ll be playing at, it may be closer to his ceiling than we’d hope for. There is still enough power and speed to get excited about here, especially with multi-positional eligibility up the middle. Yet, there are some red flags here that can’t go unnoticed.”

At this point, Baez is selling out completely for power. The limited on-base skills and bottom-barrel contact ability drags him down in points leagues considerably, and his strengths may not be strong as we think. Add in the fact that free agents who sign lucrative contracts tend to struggle in their first year with a new team, and there is a lot working against him. While his name value propels him up draft boards, you may want to look elsewhere than “El Mago” in points leagues this season.

Offseason Impact on the AFC for 2022 Fantasy Football