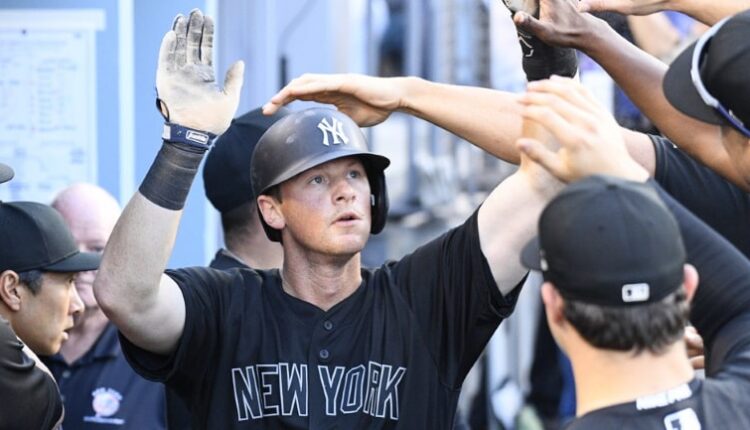 Why do you play fantasy baseball?

Is it simply for entertainment? Are you trying to win money? Whatever the reason, just like with real-life baseball, we should be doing everything in our power to come out on top. Regardless of if the prize is money or bragging rights, being able to win a fantasy baseball league is a great feeling!

Right now, a lot of the content with fantasy baseball is with regards to category leagues. That being said, I bet that a deep dive into the population of fantasy baseball players would reveal that a majority play in points league.

In category leagues, you have to worry about building a balanced team that can hit the “80th percentile target” in each category. For points leagues, though, you simply can draft the team that will accumulate the most points, similar to football. It’s very simple, and, in a way, adds an extra layer of entertainment value.

With that addressed, it’s time to analyze how players are going to produce from a points league perspective. For the most part, standard rankings are done based on our intuition and confidence in each player. While there is nothing wrong with this approach, I simply prefer to look at how a player is going to produce in specific statistics, rather than trying to solve the whole puzzle.

That led to me creating my own manual projections to establish a ranking system. These may not be in the exact order I prefer, like standard rankings, but I wanted to keep needed objectiveness to go with the subjective touch of manual projections. More information on the projections can be found in the introductory post of this series.

Today, we’ll be focusing on the first base position. In points leagues, this position takes a step up, as it’s filled with players with power and who walk; the lack of stolen bases matters much less. In the end, you could aim for an elite player, or wait out what is a relatively deep position. What will you do? That’s all up to you; there is no perfect strategy!

Once upon a time, Anthony Rizzo was one of the faces of the Cubs’ 2016 World Series championship team. In fact, in a lot of ways, he was THE face of the rebuild, considering he was the first player of their core group to play at the MLB level.

Even as recently as 2019, Rizzo posted a 140 weighted-runs-created-plus (wRC+), which is 40% above league average. Meanwhile, he was a pillar of durability, allowing him to do well in terms of counting statistics, and he had solidified himself as one of the premier first basemen to target in fantasy leagues. Unfortunately, that isn’t how he’s viewed currently.

Since 2020, Rizzo’s power (.192 isolated power/ISO) has taken a slight step back, and his wRC+ has regressed to 109. In other words, he’s still been above the league average offensively, but when you adjust for the position he plays, that isn’t as impressive.

That being said there are reasons to be optimistic for Rizzo heading into 2022. Based on his home-to-first times, his speed is slightly down, and he does pull a lot of ground balls into the shift. However, his .246 BABIP since the start of 2020 is still quite low, especially since he should see positive regression with his line-drive rate (23.9% vs career 27% average). Even with slightly better BABIP luck, he’ll get on base enough.

Rizzo’s power, meanwhile, also stands to take a step up. With just a 7.7% barrel rate, he may not tap into all of his power in the traditional sense. However, as we’ve discussed before, there are two statistics that can correlation with overachieving your expected power: pull rate and under%. Rizzo rates above-average in both of those categories. Then, there is the ballpark.

See, Rizzo founds himself back in the Bronx after signing a two-year, $32 million contract with the Yankees. Honestly, there may have not been a better potential landing spot for his fantasy value. Let’s take a look at his spray chart overlayed at Yankee Stadium for last season: 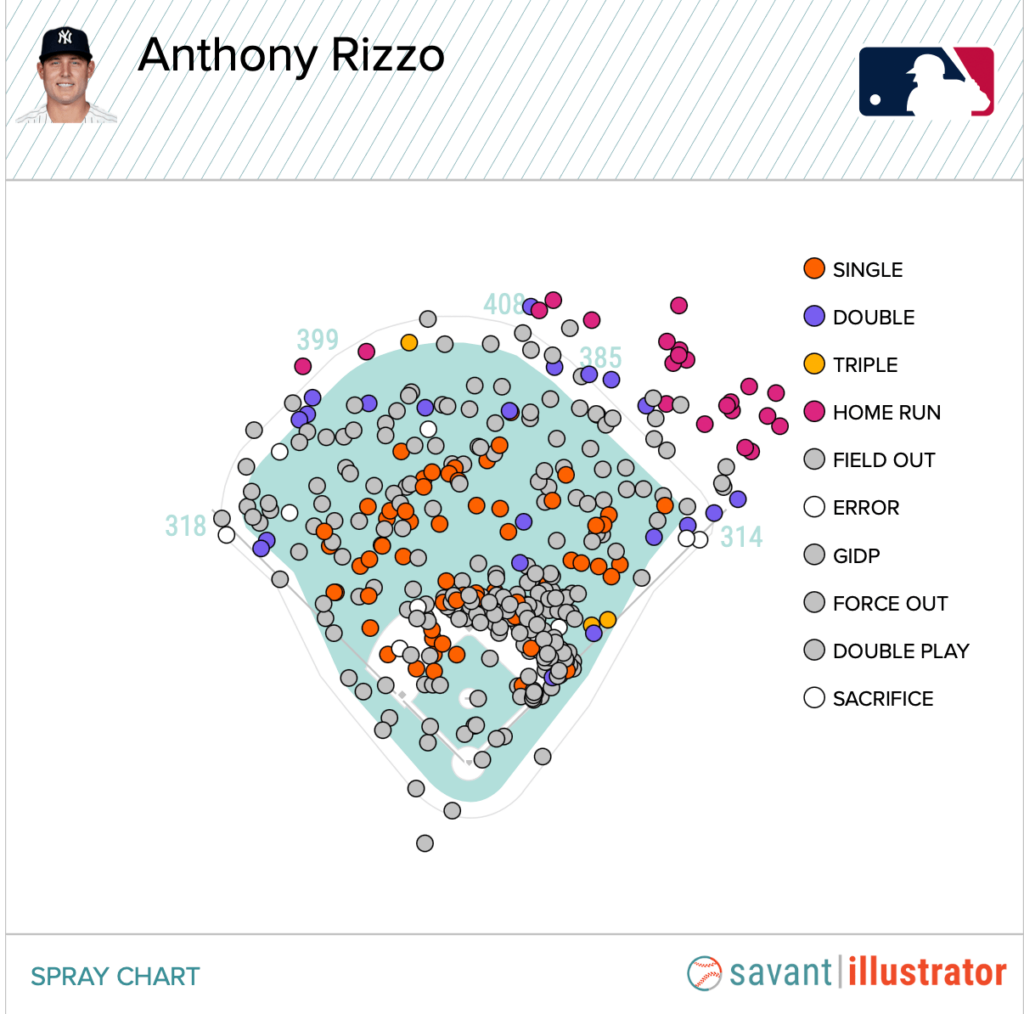 As you can see, Rizzo definitely stands the gain from taking advantage of the short porch in right field. For context, he had 24 expected home runs last season, per Baseball Savant. However, had he played all his games at Yankee Stadium, that number rises to 32. I’m only projecting about a 2-3 home run raise from the ballpark, but that’s still a notable upgrade.

Plus, Rizzo’s skillset is specifically tailored for points leagues. His strikeout rate last season was actually the highest it’s been in a full season since 2016, yet it was only at 15.1%; he’s also projected for a double-digit walk rate as well. All told, you’re getting tremendous plate skills, solid power, and improved batted-ball luck overall from the potential leadoff hitter for the Yankees. Sign me up!

I guess this is just a Yankees-themed piece! Usually, players with strong plate skills get a big boost in points league, and that does apply for DJ LeMahieu. Yet, I believe the evaluation of LeMahieu may too high on him to begin with.

After signing with the Yankees in 2019 on a two-year, $24 million contract, LeMahieu ended up being one of the best value signings in recent memory. Between 2019 and 2020, he posted a 146 wRC+, and got MVP votes in each of those two seasons. Meanwhile, in terms of fantasy, his combination of elite batting average (.336) and power (.199 ISO) made him quite the asset.

This made LeMahieu a player commonly drafted in the first three rounds in fantasy baseball drafts prior to the 2021 season. Meanwhile, by signing him to a six-year contract, the Yankees clearly were invested in him as well. Based on expectations, he was supposed to be the table-setter for one of the best lineups in baseball.

Instead, things did not go as planned. LeMahieu, with a 100 wRC+, was a league-average hitter, finishing as the 17th-best first baseman in terms of points scored despite having 679 plate appearances. Mainly, the regression came with the power, which went from a newly-found asset for him to a liability (.094 ISO) in 2021. Meanwhile, this wasn’t an issue with poor luck; he had just a 3.7% barrel rate, nor did he hit the ball in the air (18.3% fly-ball) often at all.

This actually tracks with LeMahieu’s past. Prior to signing with the Yankees, his .152 ISO in 2018 was his highest mark, and that’s despite playing half of his games in Colorado. Furthermore, this decline in power actually started in 2020 with a 2.9% barrel rate, meaning that the sample size of his decline isn’t just the one “down season.”

Eno Sarris of The Athletic has found that bounce-backs become much more unlikely once a player hits 32-years-old. LeMahieu is now 33, and it appears that we’ve seen his peak. Plus, between the signing of Rizzo, who may lead-off, as well as the addition of infielders Josh Donaldson and Isiah Kiner-Falefa, it is much less likely LeMahieu comes close to his plate appearance total from last season. As a pure accumulator that’s a problem.

The multi-positional eligibility LeMahieu brings to the table is a nice bonus. However, based on my projections, he’ll need over 690 plate appearances to match his average draft position as the 7th first-baseman off the board in ESPN leagues. Essentially, he’s being priced over his ceiling. While others pay for what he did in 2019 and 2020, I recommend moving on to another option, especially if your plan is to play LeMahieu at first base.

The Calm Before the Storm – Dynasty Baseball Strategy Checklist