It’s the love/hate relationship you really love to hate: closers! With a month or so left until Opening Day, now is as good a time as any to start breaking down some bullpen arms ahead of your draft. This series will detail every division across the league, offering you the big names you’ll want to own, as well as the sleepers you need to keep an eye on, and of course some key stats to better prepare you for the big day. Next up, we take a look at the NL West.

Must Own: Brad Boxberger/Archie Bradley

The addition of Brad Boxberger back in November has now created a serious Spring Training battle for the closer job, and I for one have no idea which way the Diamondbacks are leaning. On one hand, you’ve got Archie Bradley, the energetic lumberjack who’s become quite the fan favorite. Will Arizona really pull their best and most reliable multi-inning guy away from the setup role? Seems unlikely.

On the other hand, Boxberger probably makes more sense. He saved 41 games for the Rays in 2015, but he succumbed to injury in 2016. By the time he recovered from a torn abdominal muscle, Alex Colome was a thing. Nonetheless, Boxberger will receive his fair share of high-leverage innings in Arizona.

If Boxberger is to find success out West, a lot will depend on his slider. We saw a three percent increase last season, but it was far from effective, resulting in just two strikeouts, two home runs, and a .667 ISO. Since Boxberger tends to throw it quite hard (85 MPH), he sacrifices a lot of vertical movement, and as you can see from the chart below, a lot of the time his slider simply didn’t drop. 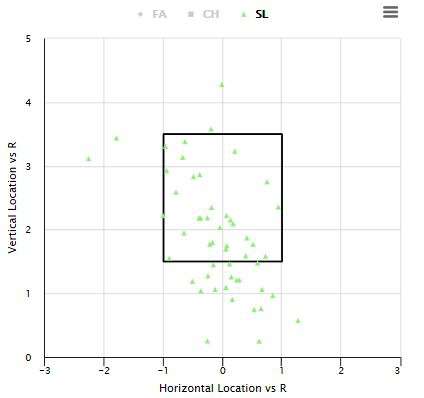 The reason Boxberger re-introduced his slider back into his arsenal was to confuse righties. Since that hasn’t gone down so well, pay close attention to it early in April. It either fails and he ditches it, or you ditch him from your fantasy team in favor of Bradley.

Diamond in the Rough: Randall Delgado

Dormant in the Diamondbacks’ bullpen is Delgado, the multi-purpose swingman who flip-flopped from starter to reliever up until he was shut down with an elbow injury in July. As a bullpen guy, Delgado relieved in 21 games and struck out 36 batters, earning one save in the process. He does have a problem with the long ball, having allowed six homers last season, but since he opted not to have Tommy John surgery on the elbow, he’s a multi-inning name to watch should Arizona be struck with injuries to their top arms.

Must Own: Wade Davis

Dream team or disaster in the making? The Rockies pried Wade Davis away from the Cubs for a cool $52 million, attempting to completely erase the bipolar performances of Greg Holland from memory this summer. Entering his eighth season in the Majors, Davis has been a reliable closer, but at 32 years of age with forearm issues in his past, I really think we’re looking at one of the riskier relievers in baseball right now.

After Davis finished with a 2.30 ERA during his lone season with Chicago, you could make a case that 2017 was pretty great for Davis, but it depends on what numbers you study. Do those six homers mean anything? Absolutely, but there are also some big moments, like the back-to-back home runs allowed to Paul Goldschmidt and J.D. Martinez in Davis’ only blown save, or better yet, the three earned runs allowed across the NLDS/NLCS, that really stand out.

Speaking of standing out, let’s talk Davis’ 4.3 BB/9, shall we? It’s a number that has steadily increased over the years, and since his four-seam fastball lost up to a mile per hour last season, it’s no wonder why. Something also seemed to change with Davis over the All-Star break, and as you’ll see below, there’s a slight difference in numbers between the first and second half. 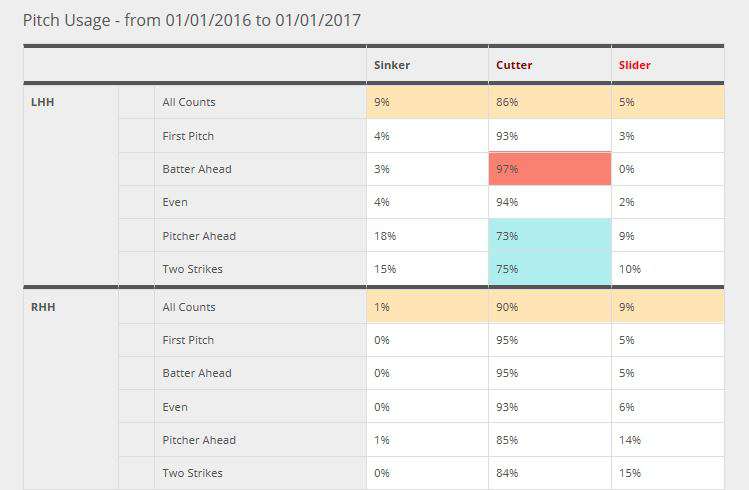 So those numbers aren’t anything drastic, but Davis certainly knows his fastball is declining. He threw it six percent less last season than he did in 2016 and threw his “get out of jail” cutter a lot more. How does that hold up at Coors?  Do we finally see some big-time regression? We wait and see.

Diamond in the Rough: Jairo Diaz

Fancy a guy debuting in 2014 still being labeled as a prospect. Yep, that’s where we stand with Jairo Diaz, the 26-year-old righty who appeared in just four games for the Rockies at the Major League level last season. Right now he’s buried beneath a lot of depth, and although the command issues remain the same, a fastball that can reach 100 MPH is a nice commodity for a bullpen that’s had its fair share of injury problems. Whether it’s to fill in while someone hits the 10-Day DL or when Adam Ottavino inevitably struggles, Diaz is a nice replacement option the Rockies will likely consider.

Must Own: Kenley Jansen

Postseason struggles taken into consideration, the forecast for Jansen is still fine with a chance of awesome. Despite allowing three earned runs and two homers during the World Series, the basic fact is that Jansen’s career-low 1.32 ERA makes him the first and only choice in terms of being the first closer selected on draft day.

With the ability to consistently throw 94 MPH cut fastballs one after the other, Jansen is a hitter’s worst nightmare. For anyone at the plate, Jansen is like the “Pawn Stars” opening montage — you never know what is gonna come through that door. Sometimes it’s a fiery cutter, other times it’s a nasty slider, a pitch that resulted in 20 strikeouts last season.

The thing about Kenley is he keeps you guessing. He finished with a career-high swinging strike rate of 18.2%, which in turn lent itself to a career-high 38.4% ground ball rate. The craziest thing is, you just can’t pick out any consistency with his pitch usage. Against righties, Jansen threw his slider five percent less as his first pitch than he did in 2016 but threw it five percent more on 0-2 counts. Numbers, numbers, numbers. Either way, Jansen is still king of the jungle.

Diamond in the Rough: Scott Alexander

Jansen has the “stuff,” but the loss of Brandon Morrow to the Cubs could make life hard should the Dodgers’ middle relief arms fail to stand the test. Lefty Scott Alexander could be in charge of some of those innings, and although he does have the tendency to give up lazy runs, you’re still looking at a reliever with the best groundball rate at his position last season (73.8%). In 69 innings with the Royals last year, he finished with a respectable 2.48 ERA and 1.30 WHIP. As far as middle relief, or even late-inning options go, things could be worse for the Dodgers. And as far as fantasy relevance goes, you’re looking at a guy with holds potential as well as a chance to back up Jansen should Josh Fields/Pedro Baez need time off.

Must Own: Brad Hand

Okay, so Brad Hand is elite, but it’s really not enough to give the Padres that status as a whole. Even so, give yourself a hand, fantasy owners, as the best-kept secret in fantasy is no longer a secret anymore. I guess we couldn’t keep a lid on his 2.16 ERA and 21 saves for long, but what do we make of the 27-year-old entering his first full season as the closer?

I know one thing: that slider is legit. He threw it close to half the time last season (43% to be exact), tallying a career-high 77 strikeouts.

Want to know something else? Hand’s average velocity on his slider actually dropped four miles per hour last season. In 2016 it averaged 85 MPH on the gun, but even with the dip in speed, it somehow was more effective. The bottom continually fell out of Hand’s slider all season long, diving so much that hitters averaged only .104 against it. Combine that with Kirby Yates’ 17.4% swinging strike rate (the fourth highest in the league), and you’re suddenly looking at a very dangerous pen.

Diamond in the Rough: Kazuhisa Makita

Plenty of question marks here, but plenty of reason for optimism, too. I love the fact that baseball allows us to talk about a 33-year-old transitioning from Japan to the Major Leagues, but I also love how San Diego’s bullpen is starting to shape up. What’s exciting here is Makita’s offspeed stuff. He throws a crazy slow curveball, which some are reporting at 55 MPH. That figures to really confuse entire lineups if he’s slotted in behind Yates and Hand this season, messing with hitters’ tempo before they face the final slider boss in the ninth. With all eyes on Shoehei Ohtani, don’t forget about the other Japanese guy.

Must Own: Mark Melancon

Definitely not a “must own,” but Melancon will have to do. This time a year ago, Melancon was San Francisco’s big money signing, and since there’s still $46 million sitting on the table, the Giants will be hoping there’s no relapse on that injured forearm.

At 33, it’s hard to know what Melancon’s ceiling is. Melancon still went 11 for 16 in save opportunities before hitting the DL for most of the season. We will need to see some of that curveball/cutter magic that we know he’s capable of, but let’s not forget Melancon finished with a 1.35 ERA just two seasons ago.

Perhaps his biggest challenge this year will be holding off the names behind him, but if he can stay healthy and string together some consistency, isn’t this just a classic case of a once good player now forgotten? Call me crazy, but there’s a sleeper-ish quality about Melancon this season.

Diamond in the Rough: Tony Watson

Small world. Watson once set up for Melancon back in their Pirates day. The year was 2014, and Watson was also an All-Star. Of course, a lot has changed since then, but Watson figures to play some sort of role in the Giants’ bullpen after throwing seven innings of relief during the Dodgers’ World Series run. To be honest, I’m not exactly sure where Watson fits in right now, because it seems like the Giants are quite comfortable with Sam Dyson, and although Hunter Strickland will never be the closer, his stats don’t really justify him losing the setup role. Still, Watson is the lefty San Francisco needed, and he was a name they were quite eager to sign.