Fantasy Baseball ADP: Whose Draft Price is Dropping in 2021 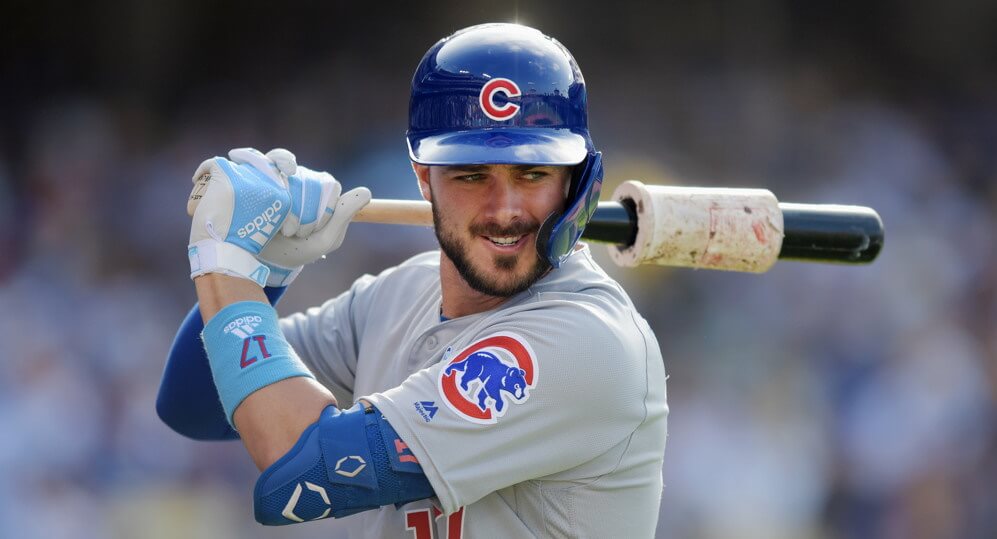 The MLB season is around the corner, and with rumors floating that MLB season will start on time with a full 162-game season, excitement is beginning to build. Fantasy Baseball drafts are in full swing, and ADP is rounding into form. The shortened 2020 season led to a lot of interesting samples, to say the least. It was always a big question mark of how guys would be valued and where would they land in drafts? Other questions, such as how much weight should we put on the shortened season, have made analysis hard. It has created some weird ADPs for plenty of players.

This article aims to examine the current landscape of NFBC and Fantrax ADP compared to last season. Are there plenty of values to be had? Would these players have rebounded over a full 162 season in 2020? These are questions I hope to answer. Let’s dive into some players whose values have taken big hits from last season.

The fall from grace happened hard and fast for Gary Sanchez. Once regarded as the top Fantasy Baseball catcher, Sanchez now has seen his ADP drop like a rock to now going outside of the top 10 catchers.

What we saw from Sanchez in 2020 was nothing out of the ordinary, except the batting average was slightly worse. After hitting .284 in his first two big-league seasons with 53 home runs in those 754 plate appearances, the expectations were high. Unfortunately, factoring in 2018 through 2020, Sanchez has been a .200 hitter with a near 30 percent strikeout rate.

It appears the name-value has completely worn off, and Gary Sanchez is now an afterthought at the catcher position for Fantasy Baseball. His whiff rate is one of the worst in baseball, leading to a terrible strikeout rate. His expected batting average of .193 does not leave much hope that Sanchez can return to form in 2021. But the good news is, he hit the ball extremely hard. He posted a barrel rate of 17.4 percent, which ranked better than 97 percent of hitters, and both his hard-hit rate and average exit velocity were 89th percentile or better.

Many are completely out on Sanchez at this point, but being the eleventh catcher makes him semi-intriguing. If you play in a 12-team league, you can draft him in the 16th or 17th round. I’m willing to take a shot at that price point, and if he flops, you can drop him for a hot catcher on the wire.

Patrick Corbin put it all together in 2018 when he posted a 200 inning season with the Diamondbacks. He posted a career-low 3.15 ERA and a 1.05 WHIP, with a career-high 20.8 percent strikeout rate. It was a contract season for Corbin, and Nationals paid up, giving him a six-year, 140 million dollar contract.

Corbin followed up his first season in Washington in 2019 with another solid season of production. He posted a 3.25 ERA and 238 strikeouts in 202 innings. But after those two great seasons, things really dipped off in 2020. Corbin was hit hard in 2020 and posted a 4.66 ERA and just 60 strikeouts in 65.2 innings. 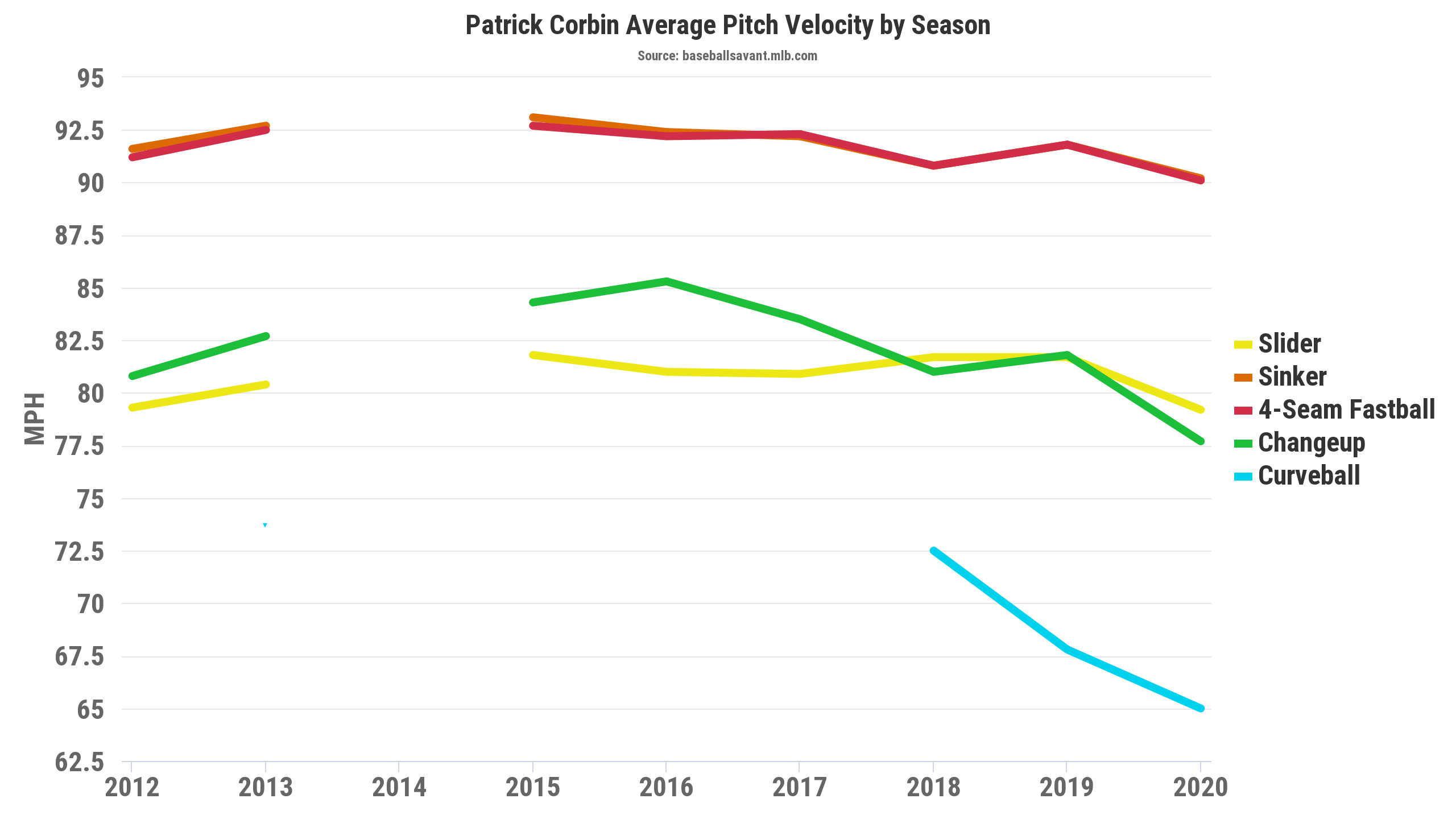 The most notable thing in Corbin’s profile was his dip in velocity. Corbin never had a great fastball or velocity by any means, but it was not great in 2020. His sinker and four-seam both averaged 91.8 mph in 2019 but averaged 90.2 and 90.1 respectively in 2020. Corbin’s slider also declined after being one of the best pitches in the game in 2019. It was still good, but his whiff rate on the slider fell from 52 percent to 38.2 percent in 2020.

Historically, Patrick Corbin has been a slow starter. Did he not have time to ramp up and get his velocity back to normal? It is possible. He is definitely a pitcher to keep an eye on in Spring Training, and if the velocity seems to be back up, he will surely move up draft boards. Corbin is worth a gamble if you are in early drafts, especially in NFBC drafts where his ADP is hovering around 150. It is interesting to note that his Fantrax ADP is nearly 40 spots higher.

Josh Bell had a huge breakout season in 2019, posting a .277/.367/.569 slash line with 37 home runs. It appeared that Bell had turned the corner and was primed for another big season in 2020, but that was not the case. Bell faltered and hit just eight home runs to pair with a .226 batting average. His strikeout rate also spiked to a career-high of 26.5 percent, and his walk rate was a career-low of 9.9 percent.

The reality is, much of Bell’s dominant 2019 season was fueled by a strong first two months of the season. Over that span, Bell accrued 242 plate appearances and hit 18 home runs over that span. He also slashed .343/.405/.704 during that time. Over Bell’s final 371 plate appearances, he hit just 19 home runs and posted a .232 batting average. It was just a hot and cold season for Bell, and the final season line ended up very solid.

The good news is Bell has a new home. He was recently traded to the Washington Nationals is projected to hit in the middle of an outstanding top half of the lineup. Bell will likely never return to 2019 form again, but can still be a solid first baseman for Fantasy Baseball. I expect the price to rise more as Bell is now in a better lineup, but if it stays post 160, he is worth taking a shot on.

The days are long gone since Kris Bryant was considered one of the top Fantasy Baseball assets and was a consensus top-five draft pick. Bryant was an All-Star in his rookie season and ran away with the National League Rookie of the Year award. He even received MVP votes that season. Bryant followed it up with an even better season in 2016 and earned him NL MVP honors. Since the MVP season, it has been a rocky road for Bryant. His name recognition kept his Fantasy Baseball ADP high for several years, but after 2020, his stock bottomed out.

Shoulder injuries have seemingly lingered and zapped much of his power. Bryant mustered just 13 home runs in 457 plate appearances in 2018. The power came back to an extent in 2019 when he hit 31 home runs. Then, 2020 was a huge bust, as Bryant hit just four home runs in 147 plate appearances. His slash line of .206/.293/.351 was also a major disappointment. His strikeout rate jumped to its highest since his rookie year, and his walk rate was a career-low. 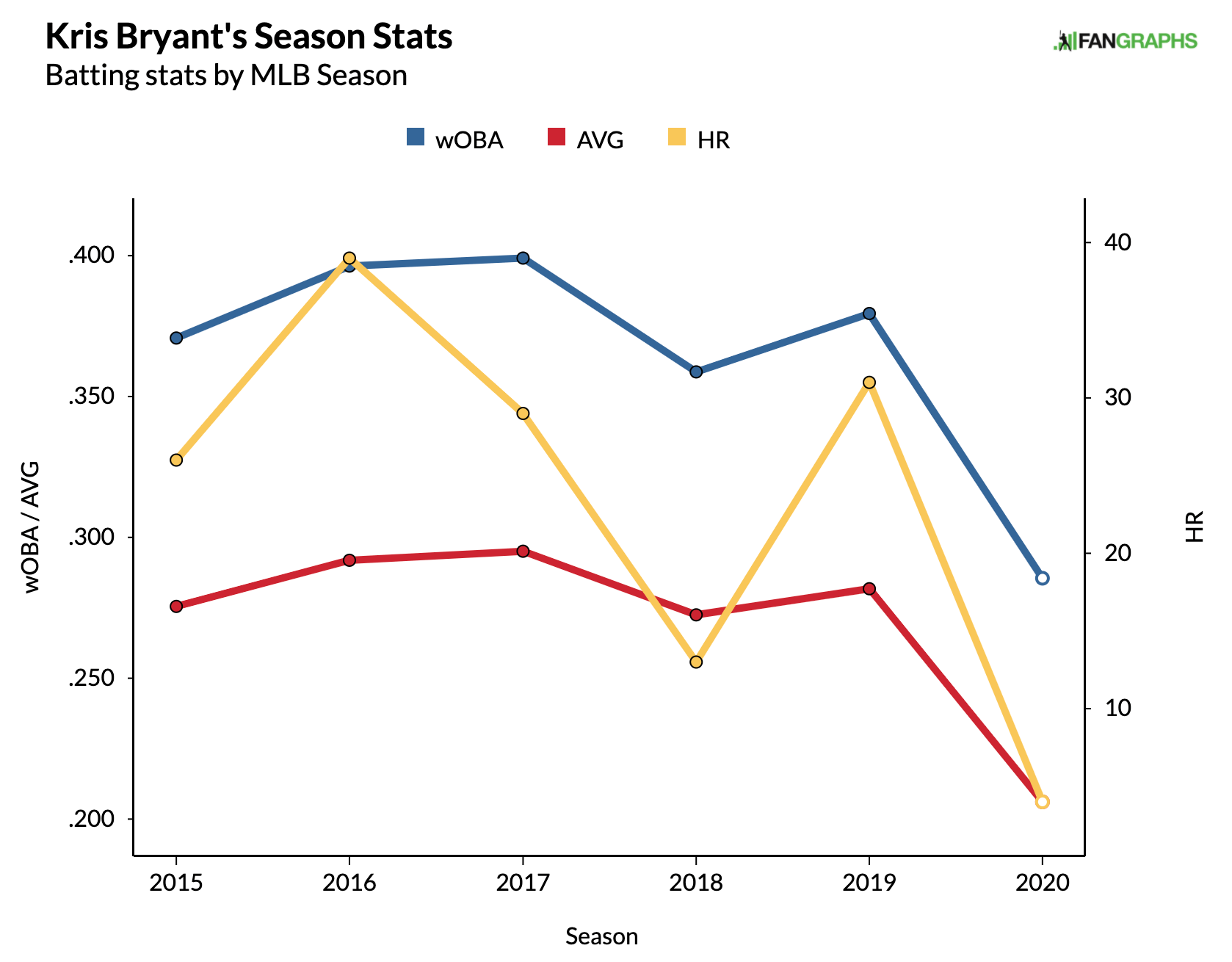 If you head over to Baseball Savant to check out Kris Bryant’s statcast page, you might free with how blue the sliders are in his profile. His barrel rate was his best statcast metric when looking into his power profile and was a career-low 5.5 percent. His average exit velocity of 86.1 mph was better than just 11 percent of hitters in baseball. There are plenty of reasons to be concerned with Kris Bryant.

Even though the MVP caliber season was five seasons ago, it still lingers in the back of my mind. Bryant is clearly an extremely talented player, and I believe that injuries have been a big issue throughout his career. Will he ever return to peak form? Likely not. But at his current ADP, it is worth gambling to see.

The most notable outlier was Martinez’s struggles against fastballs. He hit just .186 against them after hitting .318, .361, and .366 against them the previous three seasons. Martinez is also notorious for hitting offspeed pitches extremely well throughout his career. In 2020 he hit just .235 against them.

When rumors began to swirl that there would not be in-game video access, Martinez called it; “a joke.” The system offers four synchronized angles and gives hitters a view of their own swing and how pitchers attack them. Many hitters are very reliant on it, and Martinez was one of those players. Whether that played into his struggles in 2020 or not remains unseen, but I remain confident that Martinez is a strong bounce-back candidate at his Fantasy Baseball ADP.

Our MLB Draft Kit is in full swing at Fantrax HQ. Be sure to head on over and check out all our great content.