Trevor Bauer is quite the polarizing player with baseball fans. Some love him, some hate him, but there is no denying his ability to pitch. MLB awards have yet to be announced, but there is a strong possibility that Trevor Bauer wins the National League CY Young Award.

In 73 innings pitched, Bauer logged a 1.73 ERA and a 0.79 WHIP to go along with 100 strikeouts. In his one postseason start against the Braves, Bauer pitched 7 and 2/3 scoreless innings with 12 strikeouts. Dominant was the only way to put it.

Trevor Bauer was extremely impressive in 2020. But what does his underlying data suggest, and what can we expect in 2021? Let’s deep dive Trevor Bauer!

It has been an up and down career for Trevor Bauer, who has previously shown signs of being an ace. Baseball fans have long known the potential since he was drafted third overall in the 2011 draft out of UCLA. Bauer was dominant in his time in the Minors before making his debut just a year later in 2012.

Bauer failed to produce an ERA below four throughout his young career until his breakout 2018 season with a 2.21 ERA in 175.1 innings. So, five seasons with 150 or more innings with an ERA north of four and 2018 and the shortened 2020 season looking like an ace.

The one constant throughout Trevor Bauer’s career is his durability. He has pitched 150 innings or more in every season since 2014 and 175 or more in every season since 2015. The exception being the shortened 2020 season, where Bauer still managed 73 regular-season innings in 60 games. Bauer has made it clear he wants to sign with a team that will let him pitch every fourth day, and there is no reason to believe he is not capable of doing so. 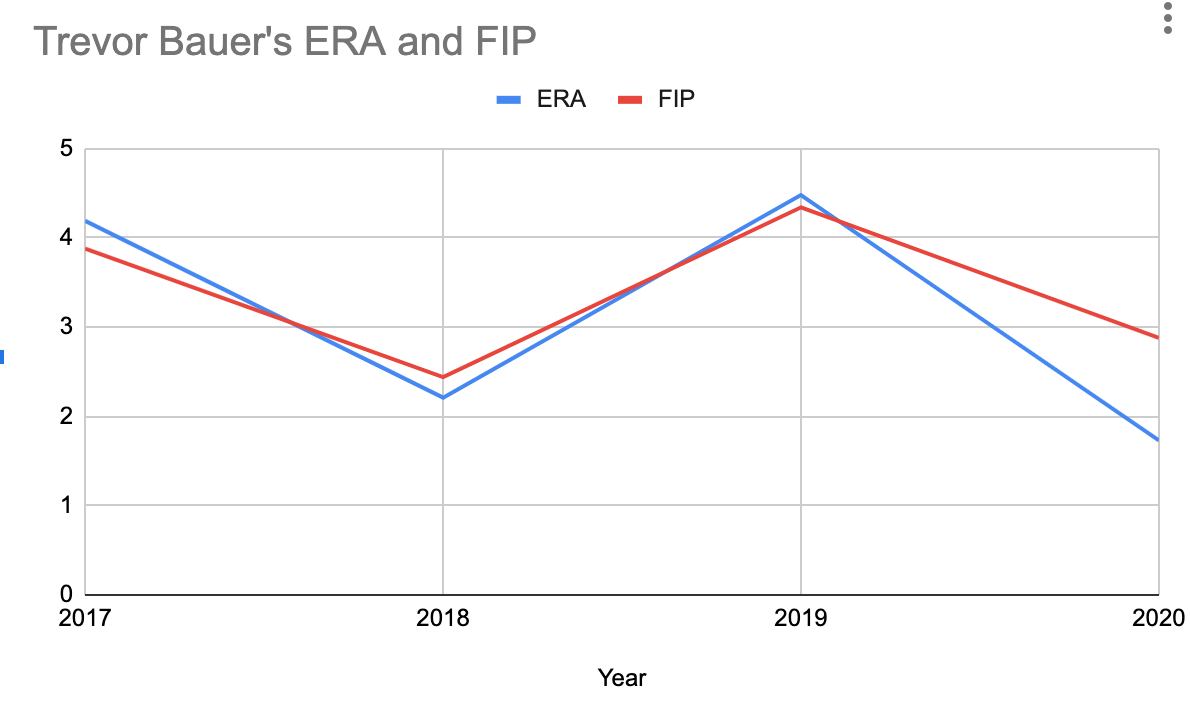 Trevor Bauer has produced great strikeout numbers over the last few seasons, but in 2020 Bauer took a step towards elite with a 36 percent strikeout rate. The increase in strikeouts could be an effect of Bauer’s increase in spin rate on his pitches. Would he have sustained this number over a full season? Likely not.

Alex Chamberlain’s deserved strikeout percent (dK%) pegged Bauer at 28.4 percent. dK% has an extremely strong correlation. Did Bauer luck into some strikeouts? It is possible. He did see an increase in swinging-strike rate and CSW%, but they were small increases. He also allowed less contact in the zone, which is a positive factor. I would not expect Bauer to produce a 36 percent strikeout rate again, but 30 percent would be a solid bet.

Trevor Bauer posted the lowest walk rate of his career in 2020 at 6.1 percent. His career walk rate is nine percent, and over the last five seasons, that number sits at 8.3 percent. Did Bauer really improve his command that much in 2020?

The reality is we likely saw the lowest walk rate we will see from Bauer. I would expect him to regress closer to eight percent over a full season, given the fact there was not much growth in several important metrics. His first-pitch strike rate was actually below his career average, and his O-Swing percentage was right in line with his numbers each of the last three seasons. There is not much in his profile that leads me to believe his walk rate would sustain around six percent over a full season.

Trevor Bauer’s batted ball profile has remained similar throughout his career. In 2020 there were some interesting trends, like the highest fly ball rate of his career at 47.8 percent. He also posted the lowest line drive rate of his career. It is a surprise that Bauer was able to keep his ERA so low (1.73), given the high fly ball rate. He also saw less pulled batted balls, which was likely a big factor in the lower home run rate. 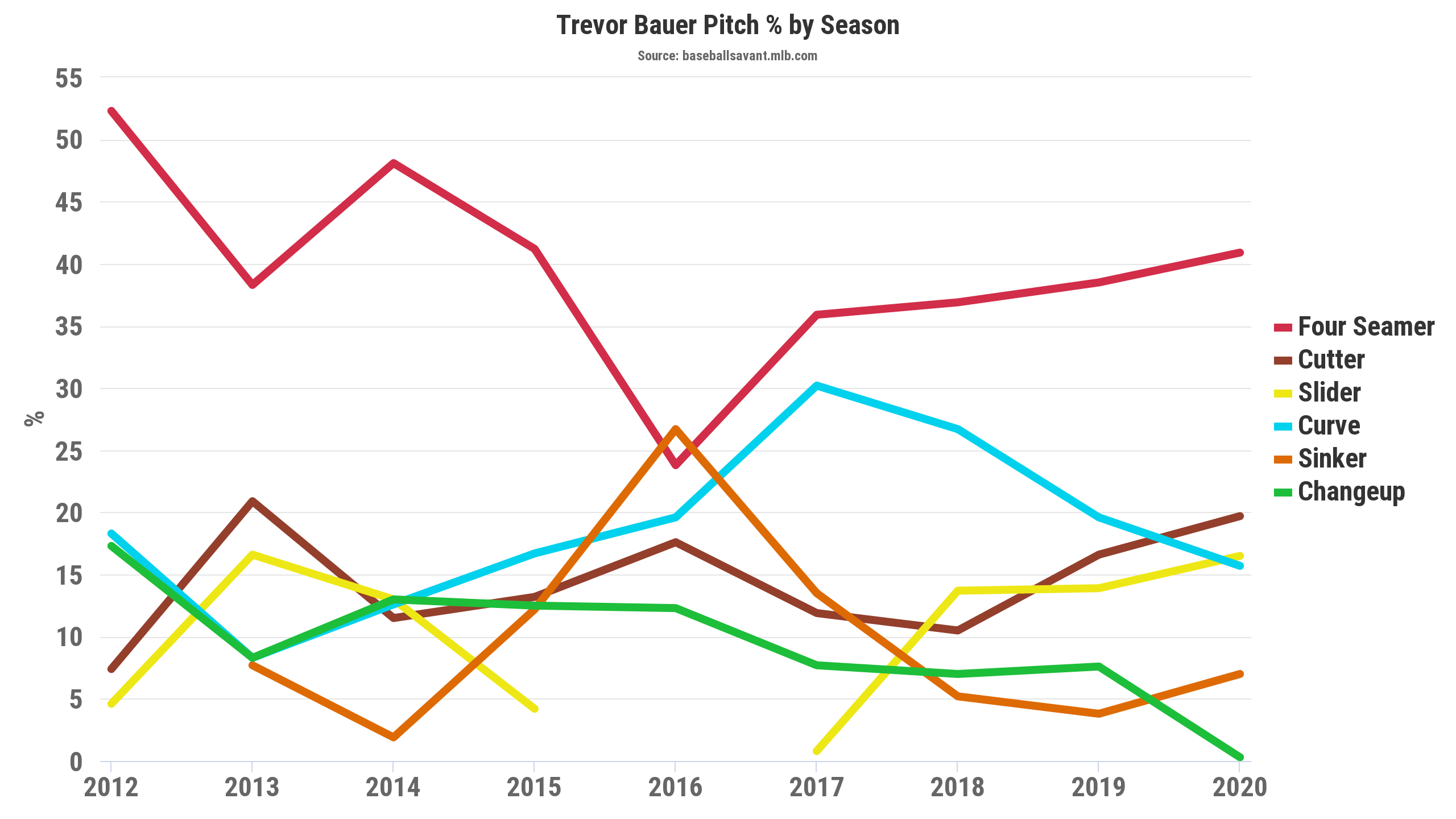 Trevor Bauer is known as a tinkerer with his pitches. Can you not tell by looking at his pitch mix by season? In 2020, Bauer used his four-seamer at the highest rate since 2015 and the highest cutter and slider usage since 2013. In a world where most pitchers are going away from the fastball, Bauer uses it consistently more. At the midway point of the season, Bauer was using it at a 50 percent rate but ended up at 40.9 percent for the year.

Trevor Bauer actually saw his fastball lose over one mile-per-average in velocity in 2020, but he made up for it with an increased spin rate. Bauer posted the highest fastball spin rate of any pitcher in baseball. It was his go-to pitch, and while it did not blow anyone away, it consistently got the job done. Bauer’s four-seamer produced just a .140/.224/.310 slash line against.

The cutter was Trevor Bauer’s second most used pitch in 2020, at 19.7 percent. It was not his go-to strikeout pitch as he only produced seven with the cutter. But, the pitch did produce a ridiculous 41.7 percent whiff rate. Bauer used his cutter extremely efficiently.

Trevor Bauer’s slider is downright filthy. It was arguably his best pitch even though he only used it 16.5 percent of the time. It produced a 33.7 percent whiff rate and a slash line of .075/.108/.137 against.

If you thought Trevor Bauer’s slider moved a lot, check out how deceptive his curveball is. Check out the video above to see Bauer fool Christian Yelich. If he was not striking hitters out with this pitch, they were pounding it into the ground with a negative eight-degree launch angle. He struck out 26 hitters on the curve and produced a 38.5 percent whiff rate.

The sinker was Bauer’s least used pitch in his repertoire. It was also the worst of his pitches, with a .292 batting average against. The good news is, his xBA on the sinker was .181. It was his only pitch with less than a 20 percent whiff rate, so it will be interesting to see if Bauer continues to use it in 2021.

Trevor Bauer has stayed relatively healthy throughout his career. Two minor injuries kept him out a total of seven days in his first six seasons. It was not until he was drilled on a comebacker against the White Sox in 2018 that he had to go on the Injured List. He was diagnosed with a small stress fracture in his right fibula, which kept him out 38 days of what could have been a CY Young campaign for Bauer.

Bauer has also pitched 150 innings in every full MLB season he has played since 2014. Since 2015, he has eclipsed 175 innings every season. In the shortened 2020 season, Bauer pitched 80.2 innings between the regular and postseason and averaged 6.7 innings per start. That is a huge deal in today’s environment, and Bauer proved he is a workhorse.

He has made it clear he intends to sign with a team who will let him pitch every fourth day, so it will be interesting to see how that shakes out.

Projecting Trevor Bauer for 2021 is a challenging task. We thought he broke out once before in 2018 before falling on his face with a 4.48 ERA in 2019. Several factors can be attributed to Bauer’s strong season, with his strong connection with the Reds’ pitching coach, Derek Johnson. Bauer said that Johnson is the best pitching coach he has worked with and the results back that.

In the #2EarlyMock put on by Justin Mason, Bauer had an ADP of 18.4 with a high pick of 12 and a low pick of 23. That made him the fourth pitcher off the board in drafts. If you want to own Bauer in 2021, be prepared to pay up.

There is no denying Trevor Bauer’s upside and the fact he is a workhorse and will provide innings. If he gets his way and pitches every fourth day, there is no doubt Bauer could be the most valuable Fantasy asset in the game due to volume. It would mean eight more starts than almost every other starter. If you got 40 starts from Bauer with a 3.50 ERA, a 1.10 WHIP, and a 30 percent strikeout rate, he well outperforms this ADP. Even with 32 starts, Bauer could return value at his ADP. In standard 5×5 leagues in 2020, he was the second most valuable pitcher behind Shane Bieber and the tenth most valuable player overall.

His value is likely to change based on where he signs as he is a free agent this offseason. Monitor where he signs and if he has a potential opportunity to pitch every fourth day. If you draft Trevor Bauer in 2021, be sure to hand onto your seat. It is sure to be a wild ride!