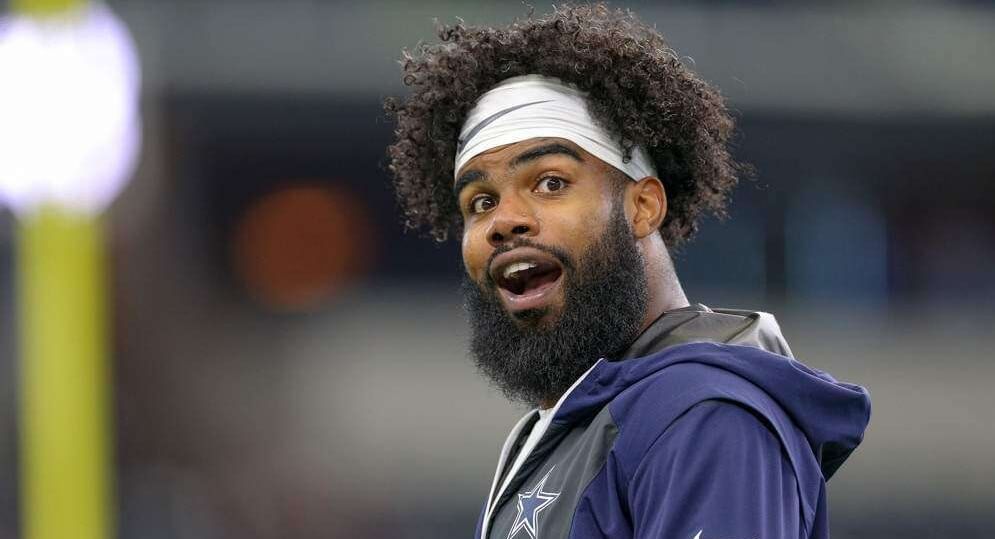 Ezekiel Elliott is a lock to go inside the top four picks in all Fantasy Football drafts. He is viewed as one of, if not the best, pure runner in the NFL. In his three NFL seasons, he has averaged 101.2 rushing yards per game. No other running back averages over 95 yards per game in that span. So why is Zeke not the universal top pick? That would be because the other three backs going around him are all viewed as better options in the passing game.

Heading into 2018, the one question with Elliott has always been his inability to be a force in the passing game. In his first two seasons he totaled just 58 catches for 632 yards and three receiving touchdowns. He averaged 2.3 receptions per game and 25.3 receiving yards per game. That is obviously going to fail in comparison to backs like Christian McCaffrey, Alvin Kamara and Saquon Barkley. But that would start to change in year three.

Over the first half of the 2018 season, Zeke looked like he was taking small steps in improving his work in the passing game, increasing his per game numbers to 5.1 targets, 3.6 receptions and 25 receiving yards. But then the Cowboys acquired Amari Cooper and it all began to change for Zeke. The second half of the season he averaged 7.4 targets per game, 6.5 catches per game and 49 receiving yards per game. That pace over the course of a 16-game would look like 118 targets, 104 receptions, 784 yards, and four touchdowns. That would rank fourth amongst RBs in targets, second in receptions and yards. Obviously, if he can sustain this pace, on top of his already sky-high rushing ability, Zeke would be the universal top pick. But the question becomes: can he sustain this sudden surge in usage in the passing game?

First, many worry if Cooper will end up taking targets from Zeke, but the exact opposite happened in the second half. With the Cowboys, Cooper averaged 8.4 targets per game, which was higher than any season he had with the Raiders. That number could climb this year, but it is not just a coincidence that Zeke really took off in the passing game once the Cowboys had a competent receiver.

The Cowboys were struggling to replace Dez Bryant last year, even though Dez had been a shell of his former self in his final couple seasons with the Cowboys. Cooper is not only the most talented receiver that Zeke has ever played with (again, Dez was not Dez anymore) but also the one that defenses had to most worry about. Cooper can not only dominate a game, as we saw him do multiple times with the Cowboys, but he is a deep threat that can help stretch the field.

That threat was on top of Michael Gallup, who was already being used to stretch the field and keep defenses honest. On average, defenses gave Amari Cooper six yards of cushion, the highest on the Cowboys. Cooper also averaged 2.9 yards of separation at the point of target. What does all this mean? Well, Cooper does a great job creating space and getting open, which should often draw double teams. Additionally, defenses expect Cooper to take shots down the field and give him the necessary cushion to be able to keep up with him. All in all, it leads to more defenders downfield, which leads to fewer defenders near the line of scrimmage.

That not only means more running lanes for Zeke, but more opportunities for Dak Prescott to dump the ball off to him and more room to run after the catch. Cooper should only continue to help create more space for Elliott.

Cooper may not be a threat to eat into Zeke’s receiving work, but that doesn’t mean there are no threats. The main ones are Randall Cobb, Jason Witten and fourth-round draft pick, Tony Pollard. But, how much of a threat are these guys?

First, Cobb will be slotting into the Cole Beasley role. Beasley always provided the Cowboys with a safe, slot receiver with a good pair of hands. If Cobb can return to form though, he does present a more explosive option than Beasley. However, with the Packers, Cobb has averaged between 6.1 and 6.8 targets per game over the past three seasons. It is a different offense, but Beasley sat between 4.2 and 6.1 in the past three seasons.

Last year, Beasley saw 5.4 targets per game. It is definitely possible Cobb sees an extra target per game, but he has concerns himself. He is coming off a season lost due to hamstring injuries and needs to showcase that he is still the Cobb of old.

As for Witten, he was brought back from the announcer booth to help fix the awful tight end position for the Cowboys. Last year, the Cowboys tight ends finished with 92 targets, 68 receptions, for 710 yards and four touchdowns. They averaged 5.75 targets per game and 4.25 receptions per game. In his last two seasons before retirement, Witten averaged 5.7 targets per game and 4.1 catches. Now he is 37 years old and a year removed from football. It is hard to see Witten really bolstering the Cowboys tight end numbers this year. I would be surprised if Zeke lost targets to Witten.

Lastly, there is Pollard, who racked up 104 catches in three seasons with Memphis. In fact, he had 104 catches in college and only 139 rushing attempts. He is a pass catching specialist and the fact that the Cowboys drafted him is a little scary. There was no threat in the backfield to steal targets, as Zeke finished with 95 and the rest of the Cowboys backs combined had only 17. Pollard was likely drafted to give the Cowboys some depth, especially in the passing game, but him stealing some passing down duty has to be at least somewhat concerning. This will be worth monitoring throughout the pre-season.

Ezekiel Elliott made huge strides in the passing game in 2018, with more targets and receptions in 2018 than in all of 2016 and 2017 combined. The concern though is that those numbers take a hit, but unless you are scared of Cobb, Witten, and Pollard changing the usage to pre-2018 form, there is no fear with Zeke. He is already going inside the Top 4 RBs in all formats, but if his receiving numbers can stay the same, or even improve, he will finish as the top scoring fantasy back this season!

Are you ready to take Ezekiel Elliott as the first pick in your draft? For more from Michael check out his full archive.