Ezekiel Elliott: A Rock and a Hard Place 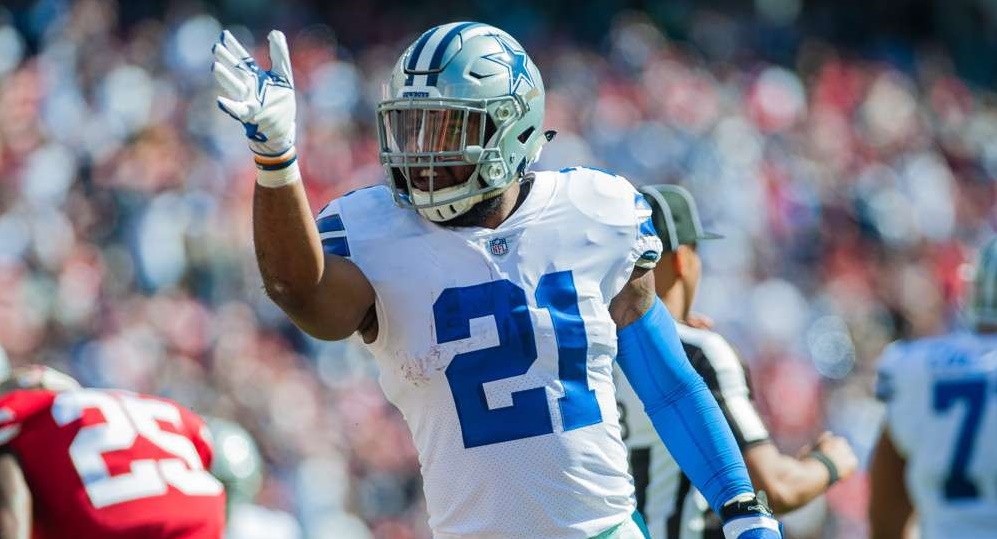 Let me tell you a story… The year is 2008. Coming off a season in which the NFL generated a whopping $7.1B in revenue, which they shared in a 43-57 split with the players after raking nearly $1B off the top, the powers that be began to get restless. You see, in just two seasons, the owners could choose to trigger an opt-out clause from the current CBA labor deal between the NFLPA and NFL. They would exercise that option for the purpose of renegotiating the revenue split and capping player salaries in a number of interesting ways. The most pertinent of these to the case of Ezekiel Elliott, was a capped first-round rookie wage scale, a four-year playing requirement for all players to reach unrestricted free agency (with a fifth-year option for first-round picks), and a reinstatement of the franchise tag rules first adopted in 1993. Because of this turn of events, Zeke like most of the game’s best running backs is caught between two difficult decisions – neither of them clearly in his best interest.

From the point of view of Elliott and his representatives, his camp feels he has a case based on talent. Though Zeke has never played a full 16-game season in his three-year career, his per-game influence is unmatched. Since 2016, Elliott has registered three of the top four seasons amongst all players in rushing yards per game. He shouldered a top-3 workload in two of those years and didn’t fall outside of the top 30 in rush attempts even in his shortened 10-game 2017 campaign.

Last year, Elliott registered a rushing success rate over average of 1.7%, with 95 evaded tackles (2nd NFL), and 540 yards created (3rd NFL) en route to his second rushing title in three years. He was a threat through the air as well, registering an 81.1% catch rate (8th NFL) on 6.3 targets per game (5th NFL). He did all this while playing at a cap hit of just $6.8M, contextualized against the $11.1M average annual salary in a deal Tyrell Williams signed this offseason. As it currently stands Zeke will be unable to negotiate a new contract until after the 2020 season when he will play on a 5th-year extension of just $9.1M, nearly $4M below the lowest of Zeke’s most comparable colleagues Todd Gurley, Le’Veon Bell, and David Johnson.

Running back production has been shown to peak in the age 24 season Elliott is entering now. When one considers those who play the position are at a 65% to 70% risk of landing on the injury report, 40% risk of missing a game, and 15% to 20% chance of missing four or more games in a season, it’s not hard to see why Elliott wants a hefty raise over his current cap number.

The 10,000 foot view of the market Elliott is attempting to alter is a bleak one for him however. Though the salary cap has risen by an average of approximately $11M per season between 2016 and 2019, this year is the first time that running back position groups as a whole have seen teams spend more than 3.9% of their total cap on those players. 2019 is the first season of the last four to see an increase in RB spend to a still-meager 4.5% of cap.

For comparison purposes, NFL teams in 2019 will spend just $8.6M total on their RB rooms compared to $9M to TEs despite TE’s ceding targets to running backs at an alarming rate. Last year, the average number of targets for the top 20 most targeted TEs was 5.53/gm. Running backs saw 5.5 looks per contest.

Still, with the option to extend first-round backs into an extra fifth year of their prime, followed by two subsequent opportunities to franchise tag these players the leverage clearly lies with the Dallas Cowboys front office. By the time the Cowboys are through with Zeke, he like most first-round backs would have spent seven years in the organization without negotiating his own deal. If he lucks out, he’ll hit free agency for the first time in 2023 as a 29-year-old.

The saying “running backs don’t matter” is commonplace now and is borne out in statistical analysis that focuses on EPA and win probability of runs vs pass in most situations. The offensive line, scheme, and play call choices have been shown to have more impact on rushing success and overall win percentages than individual RB play does. Though the evidence is laid bare, from a humane perspective all this does is further swing the pendulum of power firmly on the side of ownership.

So What is to Be Done?

Fantasy GM’s shouldn’t abandon ship quite yet. Though the power clearly rests with the team in this instance, Cowboys GM and owner Jerry Jones has gone on record saying “It’ll happen” , when referencing the contracts of Ezekiel Elliott, QB Dak Prescott, and WR Amari Cooper. As JJ Zachariason noted on his Late Round Podcast, Elliott must play one more season before the end of his deal in order to have a chance at unrestricted free agency per league rules. Though the Joey Galloway holdout is cited as a timetable for return if games are indeed missed, the presence of Elliott’s already exercised fifth-year option complicates matters a bit. There is a chance he holds out to play on the eminently more reasonable $9.1M cap hit next year to accrue his fourth year. Things are still up in the air but it is unlikely the Cowboys call his bluff this season. Even if they do, his rights will remain with the team for the immediate future as well as a few additional seasons based on potential team maneuvers.

It is fair, however, to start to question how fair this current CBA is to the RB position group and to wonder what impact this situation along with Melvin Gordon’s and Le’Veon Bell’s will have on the structure of the new CBA to be renegotiated following the 2020 season.