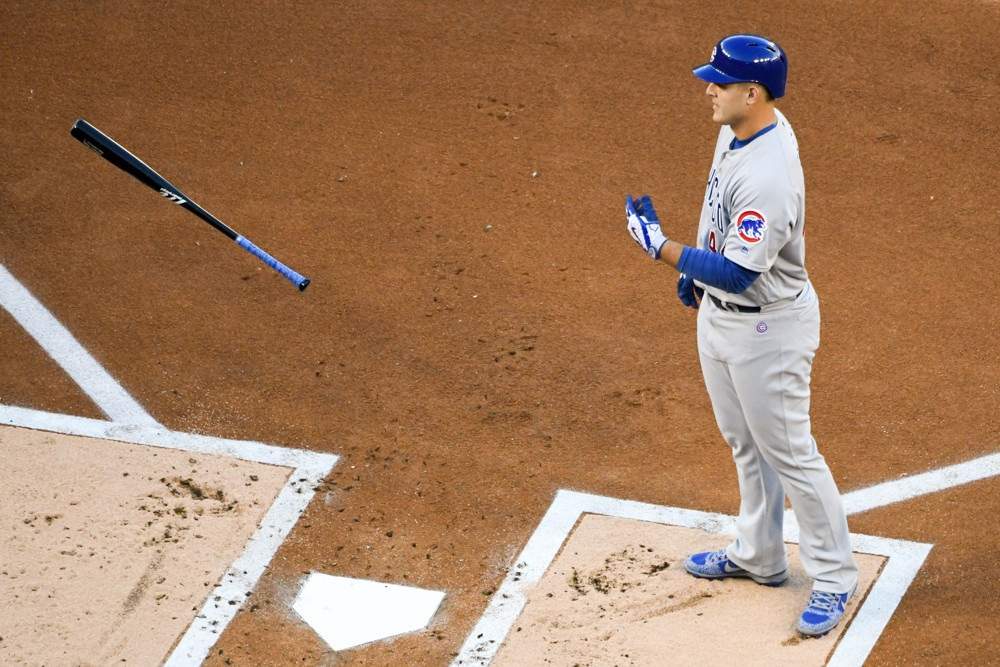 Writing this article is very cool. It may not seem very important or significant to you, but this was the first piece I was ever assigned when I started writing about Fantasy Baseball at SP Streamer at the beginning of 2020. I have come a long way and grown a ton as a writer, but I will also remember that first piece I wrote as I addressed Marcell Ozuna and other hitters who underperformed their expected batting averages in 2019. Ozuna went on to have an MVP caliber season in Atlanta in 2020, but that is beside the point.

Statcast data has become a passion of mine over the last year. During the season, I wrote a weekly piece titled “Statcast Trends,” where I scoured the data to find players that were trending up or down. I also published a series titled “How To Use Statcast Data” earlier this offseason. Over the next several weeks, I will be using Baseball Savant’s expected stats to look at some players who over or underperformed actual production. Today, we will start by looking at players with expected batting averages higher than their actual batting average.

Expected batting average is often referred to as xBA. It is a statcast metric that measures the chances of a batted ball becoming a hit. Each batted ball event is assigned an xBA based on how often a comparable batted ball becomes a base hit. The factors included are exit velocity, launch angle, and sprint speed.

For example, a player hits a line drive in the gap between center and right field. That batted ball is assigned an xBA of .800. That is because balls hit in that part of the field with similar exit velocity and launch angle have become a hit eight out of ten times.

Expected batting average is useful because it indicates a player’s true skill than batting average. xBA removes defense from the equation. Hitters can influence exit velocity and launch angle but have no control over what happens once a batted ball is put into play.

Expected stats are not perfect, but they are useful when evaluating players. It is also important to remember that 2020 was a strange season with small samples. Things were different, and players did not perform up to par. I am remaining hopeful for a normal season in 2021. But without further ado, let’s get into some of the largest underperformers of batting average in 2020.

The days are long gone since Gregory Polanco was considered one of the top prospects in baseball. He has failed to live up to the hype since joining the Pirates in 2014. After testing positive for COVID-19, Polanco had a terrible season in 2020. He slashed a career-worst .153/.214/.325 with seven home runs and three stolen bases. You have to wonder if COVID affected his performance.

His plate discipline and contact % were problematic, but improved substantially in last 25 games.

As you can see in Toby’s (@batflipcrazy) tweet above, Polanco hit the ball extremely hard in 2020. He had one of the highest average exit velocities in the league and posted a 97 mph exit velocity on line drives and fly balls. Many of his contact and swing percentages also trended in the right direction to end the season.

Polanco’s early NFBC ADP is 432.63 through 29 drafts. There is zero risk in taking Polanco in this spot. If he can hit closer to his .250 career batting average with 20 home runs and ten stolen bases, he will return huge dividends.

I would expect Castellanos to have a major rebound season next year. It would not surprise me to see him hit 30 home runs with a batting average close to .275. For a more in-depth breakdown of Nick Castellanos, check out my deep dive on him here.

The Yankees catcher, Gary Sanchez, has had a huge fall from grace since his dominant 2017, where we saw him as the top catcher for Fantasy Baseball. Since 2018, Sanchez has slashed just .200/.296/.453 in 998 plate appearances. It does not matter how much power you have when you cannot hit the ball. Sanchez even began to find himself on the bench toward the end of the season in favor of Kyle Higashioka.

While Sanchez had a putrid batting average of .147, his expected average was .046 points higher. It is not that a .193 batting average would be respectable, but it suggests that Sanchez was unlucky. His batting average did trend upward toward the end of the season which was an encouraging sign. 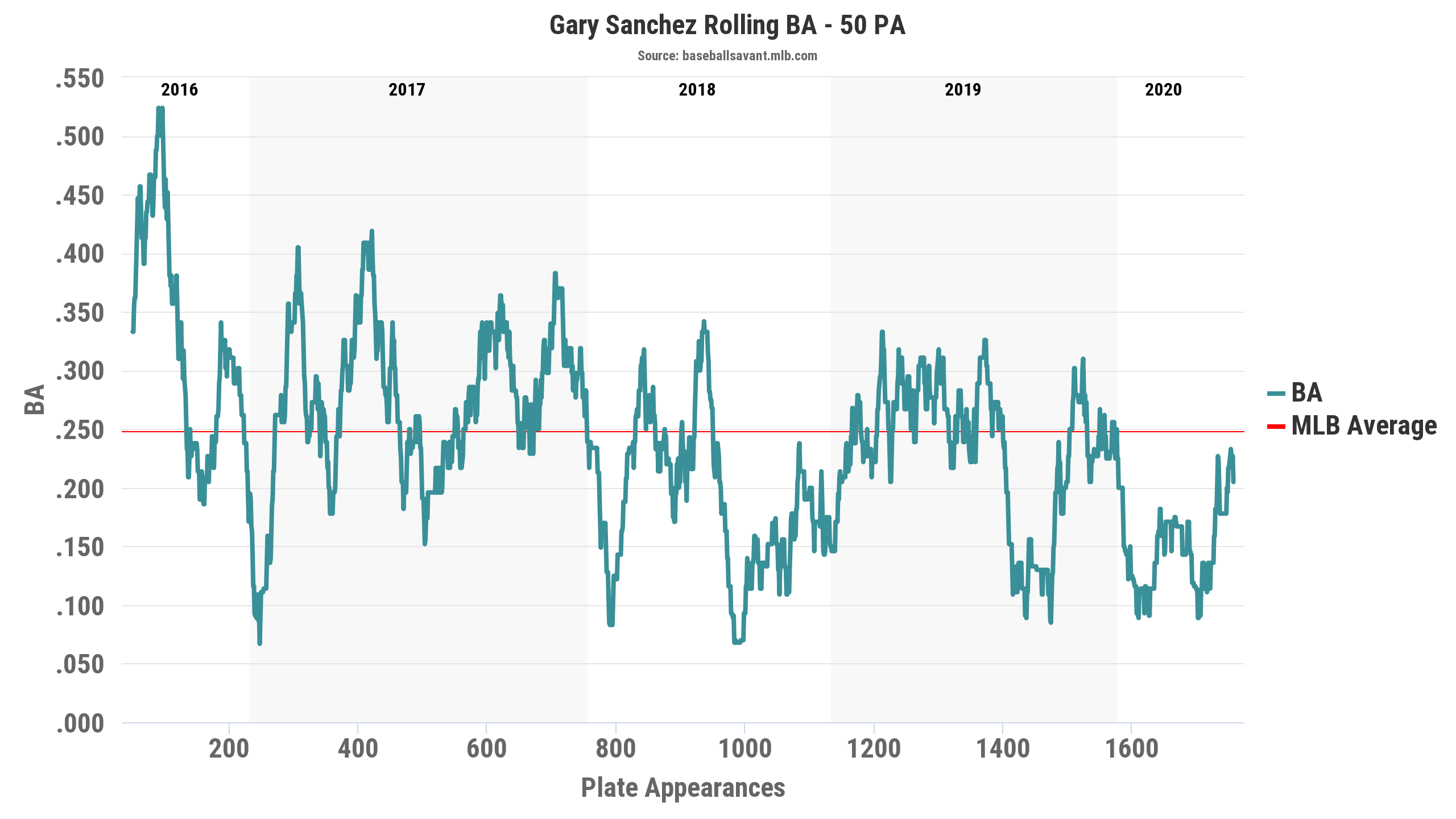 Sanchez hit the ball extremely hard, posting a 99 mph average exit velocity on fly balls and line drives in 2020. He also barreled the ball at a 17.4 percent rate, one of the league’s best rates. There is no denying that when Gary Sanchez hits the ball, he hits it hard. The larger issue is actually hitting the ball. He struck out 36 percent of the time in 2020. That was ten percent higher than his career rate, while his swinging strike rate did not even increase by a percentage point. I would expect a drop in strikeout rate next year. The concern is still the extremely low batting average floor. While Sanchez did underperform his expect batting average, I would not expect a huge rebound next season.

The good news is Yelich was one of the largest underperformers in expected batting average, slugging percentage, and wOBA. A .250 batting average would have still been a disappointment for Yelich but is much better than .205. The biggest issue for Yelich was he was too patient and worked too deep into counts. That was a big factor in his strikeout rate jumping by over ten percent. His BABIP was also .259, nearly .100 percentage points lower than his career .354 BABIP. 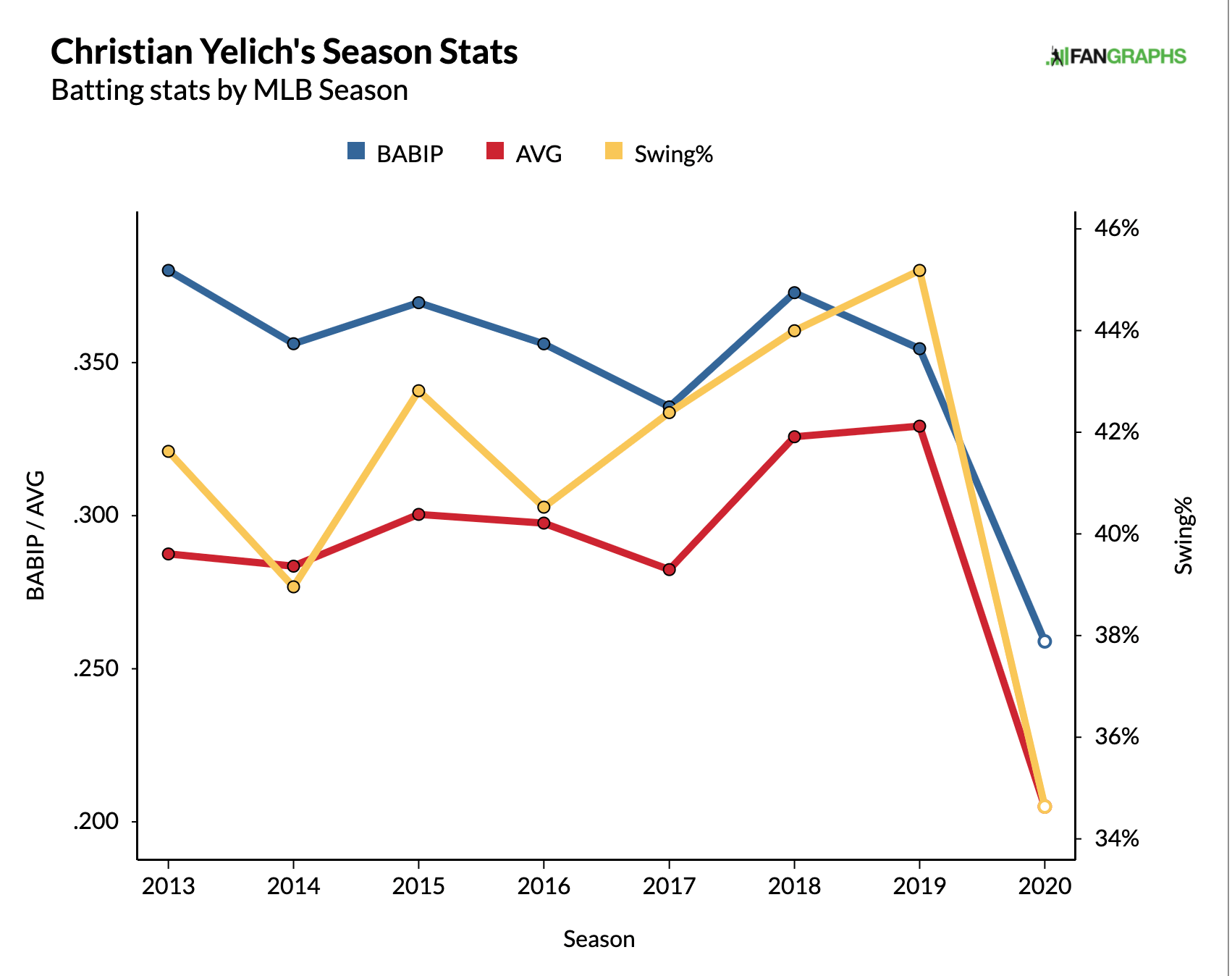 On a positive note, Yelich hit the ball harder than he ever has with a 55.6 percent hard-hit rate and an average exit velocity of 94 mph. Both of those numbers were among the league leaders. The expected stats help back up that Yelich severely underperformed in 2020. I would not be surprised to see Yelich post MVP caliber numbers once again in 2021.

Anthony Rizzo was arguably the most consistent first basemen in the league for six seasons before 2020. The power output was solid, as Rizzo hit 11 home runs in 243 plate appearances, but his usually steady batting average dropped tremendously. Between 2014 and 2019, Rizzo posted a .284 batting average in nearly 4000 plate appearances. In 2020, that number dropped to .222. On a positive note, he walked 11.5 percent of the time and posted a .342 OBP.

Rizzo likely underperformed his xBA due to an extremely low BABIP of .218. His expected number pegged him as a .266 hitter, much closer to his career .271 batting average. Steamer projects Rizzo to hit .270 next season, and I would take the over on that number. I am confident that Rizzo will return to form next season and be a great value given his 99.7 ADP.

Head on over to Baseball Savant to look at more hitters who underperformed their expected batting averages in 2020.