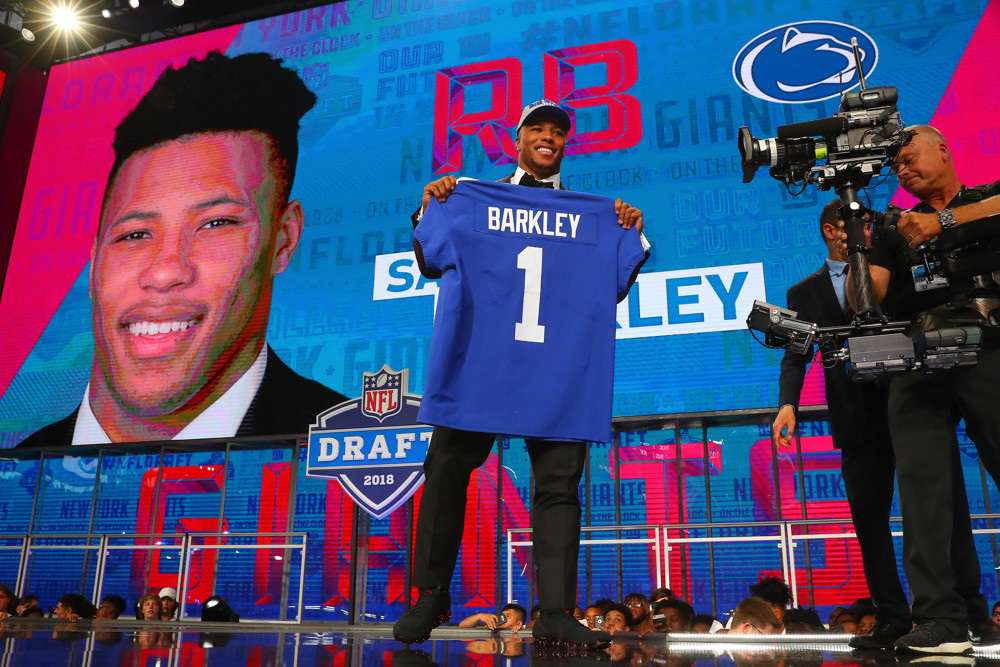 If you’re lucky enough to get the first overall pick in your Fantasy Football dynasty draft, it’s not a given that you should take a running back. It’s what I would do, but I wouldn’t be mad at you if you selected Odell Beckham Jr. or DeAndre Hopkins. It’s certainly nice to have young stud wideouts as they are more durable and tend to have longer careers than the dynasty running backs listed below. It’s a passing league after all.

My strategy in standard and PPR redraft leagues doesn’t change a whole lot when it comes to dynasty leagues. You should certainly look for youth in your draft, but things change so quickly from year to year that you should focus on winning now, not in a couple years. Take what the draft gives you. If someone near the end of their career, like Larry Fitzgerald and LeSean McCoy falls way down the draft board, it’s OK to take them.

It’s very important to grab as many three-down backs as possible, especially if you are playing in a deep league. They’ll fly off the board, and the more of these dynasty running backs you have the better the edge you’ll have on your opponents. There’s a good chance you could see as many as eight running backs get drafted in the first round.

Todd Gurley will be 24-years old as he enters his fourth season in the NFL and he’s coming off his best season to date. The former 10th overall pick is fresh off running for 1,305 yards on 279 attempts across 15 games. Gurley scored 13 rushing touchdowns and found the end zone a league-high 19 times in 2017. He was a Fantasy beast as he racked up 64 catches on 87 targets for 788 yards. Gurley led the league with seven 100-yard rushing games and finished his season with a 10-catch 158-yard receiving game showing just how dynamic he is through the air.

Gurley bounced back from a 3.2 yards per carry mark in his sophomore season to an impressive 4.8 YPC average in 2017. It’s amazing what good coaching, an offensive line, and weapons in the passing game will do for a running back. Sean McVay led the Rams to the highest point per game total (29.9) in his first year as a head coach. Los Angeles invested in one of the better offensive lineman in the game in Andrew Whitworth, and he did wonders for the offense that will continue to run through Gurley. Don’t be surprised if he leads his team in catches again this season.

Ezekiel Elliott has led the NFL in rushing yards per game in each of his two seasons. He’s certainly proved he can handle a full workload as he had 354 total touches in his rookie campaign with 322 of them coming on the ground. Zeke touched the ball 23.6 times per game in his rookie season and finished with 26.8 touches per game last season. Elliott also received more work in the passing game as he had 3.8 targets in 2017 compared to 2.6 per game in 2016. He’ll likely get even more work through the air in 2018 with Dez Bryant no longer with the team. Elliott has 25 touchdowns in 25 games (3 receiving), and as he enters year three in the NFL, he’s still just be 22 years old. The Cowboys offensive line remains one of the better ones in the game and their game plan will be to run the ball for years to come, making Zeke maybe the best of the long-term dynasty running backs going.

Saquon Barkley will be the first overall pick in every single Fantasy Football rookie draft this season. It’s quite possible he’ll be a Top-5 pick in dynasty formats as well. The 6-foot, 233-pound running back out of Penn State has all the tools to be a star in the league right away despite an average, but improved offensive line. Barkley has a ton of speed, he’s elusive, can block and catch. He’s also a near lock to touch the ball 20 plus times a game with nobody in sight to steal work.

Le’Veon Bell is arguably the most talented running back in the NFL, but his contract situation suggests 2018 may be his last year in Pittsburgh. Bell has also suffered a foot injury, two knee injuries and a groin injury which have caused him to miss multiple games over his five seasons in the league. The Steelers will likely continue to run him into the ground which is great for redraft purposes, but you have to wonder about his longevity. Bell is coming off a 406 touch campaign that saw him total 1,946 yards. 1,291 of those yards came off his 321 rushing attempts. Bell has an impressive 4.3 yard per carry mark for his career and has hit the 75-catch total in three seasons. Don’t let the workload scare you too much though. He should still be among your Top 5 dynasty running backs. If he’s not you’re thinking too much.

David Johnson only managed to play parts of one game in 2017 as he suffered a season-ending wrist injury on opening day. There’s nothing positive to say about an injury that keeps someone sidelined for the entire season, but in this case be thankful it wasn’t a knee injury. Johnson has loads of talent as he enters his fourth season, and like Bell he’s a potential free agent after this coming season. He’s also very dynamic and explosive like Bell, but he has 597 touches on the resume compared to Le’Veon’s 1,633. The soon to be 27-year-old racked up 80 catches and over 2,000 total yards in his sophomore season. DJ also found the end zone an impressive 20 times in 2016. The Cardinals’ back has 32 total touchdowns in 33 games and if he falls down draft boards consider it your leagues issue, not yours. There are some question marks about the QB play in Arizona this season, but the offense should run through him in 2018 and it shouldn’t be a problem if he changes teams.

Alvin Kamara started his rookie campaign as the New Orleans Saints’ third running back behind Mark Ingram and Adrian Peterson. He finished the season as the Offensive Rookie of the Year and found the end zone 13 times on his way to RB3 in PPR formats and RB4 in standard leagues. The 22-year old had an impressive 1,901 all-purpose yards which was the third-most in the league. His 81 catches were the third-most all-time by a rookie running back and just four behind Bell for the league lead. Kamara had a league-high 826 receiving yards and his five receiving touchdowns were one back of Gurley’s league-high. Kamara added another 728 yards on the ground with eight rushing touchdowns.

Kamara had one of the most efficient seasons in NFL history as he finished with 6.1 yards per carry and 10.2 yards per catch. He was just the second rookie ever to have at least five receiving touchdowns, five rushing touchdowns, and a kickoff-return score. His yards per carry numbers will likely take a hit, but you can certainly expect a bigger workload especially through the first four weeks with Mark Ingram suspended. Kamara never had 20 touches in a game last season, but still put up double-digit fantasy points in standard formats 10 times. He was the only back inside the top 11 last season in Fantasy points to have fewer than 230 carries. Last year’s third-round pick had 221 fewer carries than Bell and finished 28 Fantasy points shy of him in PPR leagues. The efficiency will come down, but the touches will rise. It remains to be seen if he can handle a full workload, but don’t let that stop you from drafting him.

Leonard Fournette started his NFL career with a touchdown in each of his first six games. Fournette ran for 1,040 yards and finished with 10 total touchdowns, nine of which came on the ground. He added another 242 yards and four touchdowns in three playoff games. The former LSU product finished seventh among running backs in rushing attempts (268) and sixth in touches (304). He averaged 20.6 carries per game and 3.7 targets per game and would have likely finished near the top in touches had he not missed three games (two due to injury, one because of disciplinary reasons). Despite the big workload, Fournette only averaged 3.9 yards per carry and 3.3 if you remove his two longest runs of the season. His six games with 100-plus rushing yards (including playoffs), were tied for the second most, one behind Todd Gurley’s seven. He also caught 36 balls for 302 yards proving some value in PPR leagues as well.

The Jacksonville Jaguars led the NFL with 527 rushes and they’ll be committed to the run again in 2018 with the offseason signing of left guard Andrew Norwell. There is nobody in the backfield that will steal touches from Fournette, especially in the red zone with the loss of Chris Ivory. Fournette is a more of a grinder than a burner, but did record the two fastest speeds from a running back in 2017 (22 MPH & 21 MPH). He showed up for mandatory minicamp 10 pounds lighter, and the Jacksonville offense is built around his physical running style. The projected workload is nice, but the injury history last season and throughout his college career makes him a slight risk. You could take him over Kamara in standard leagues.

Kareem Hunt was an absolute steal in redraft and dynasty leagues last season. Hunt was drafted in the ninth round before the Spencer Ware injury and was taken in the second after it. Many didn’t know what to expect, but he ended up finished with a league-high 1,327 yards. The 22-year-old had an impressive 4.9 yards per carry mark and caught 54 of the 63 balls thrown his way for 455 yards. The Chiefs’ back racked up 11 touchdowns, despite going nine games throughout the middle of the season without one. For whatever reason Hunt saw fewer than 12 carries in four games last season and may get his fair share of stacked boxes with rookie quarterback Patrick Mahomes under center. Don’t let that fool you, Mahomes can play, and this offense will be explosive. Even with Ware returning, Hunt should still top 270 rushing attempts and is the goal-line back in the offense making his spot in the Top 10 dynasty running backs real comfortable.

There’s definitely some risk involved when selecting Dalvin Cook in a dynasty league as he’s coming off a torn ACL. Cook only played four games in his rookie season, but they were four impressive games. The 22-year-old totaled 354 yards on 74 attempts (4.8 YPC) and found the end zone twice. He also added 11 catches for 90 yards. The Vikings’ back exploded onto the scene with 127 rushing yards in his first NFL game.

There are other concerns as well for Cook as he has a new quarterback in Kirk Cousins and a new offensive coordinator. Gone is Jerrick McKinnon, but Latavius Murray remains and it’s quite possible he touches the ball 5-10 times a game. At least to start the season.

Melvin Gordon cracks the Top-10 dynasty running backs and it’s all about volume with him. Gordon only has a 3.8 yards per carry mark for his career, but he has 722 rushing attempts over his first three seasons. 17 rushing attempts per game on the resume doesn’t seem like a whole lot, but he only had 184 in his rookie year compared to 284 in 2017. Gordon has also seen his catches rise from 33 to 41 to 58 and is coming off an 83-target season. He’s come a long way since his zero touchdown rookie campaign as he’s scored 24 touchdowns in his last 29 games. Gordon has been a monster in the red zone, finishing with the third most touches last season and the fourth most in 2016 despite missing three games. That’s not going to change anytime soon. It’s the usage on the ground that has him ranked higher than Christian McCaffrey.