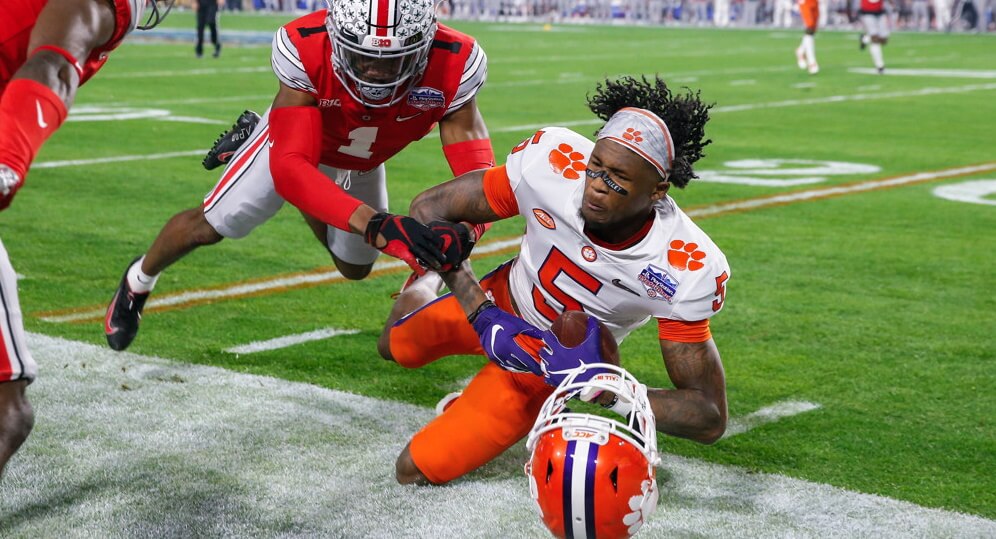 With the 2020 wide receiver class being one of the deepest in recent memory, there was no way I could cover all the dynasty rookie receivers goodness in one week.  This week we will take a look at the lone remaining first-rounder, as well as some second-round guys (many of which could have easily been first-rounders) and a few guys beyond that could be late-round dynasty lottery tickets heading into 2020 rookie and dynasty drafts.

Aiyuk was a JUCO standout before finding his way to Arizona State for his final two college seasons.  After being used sparingly in his first season, he shined in his final season as a Sun Devil.  In 12 games, Aiyuk posted 65 receptions for 1192 yards and eight touchdowns in 2019, playing his way into a first-round selection by San Francisco.

Aiyuk is a tough one to project, but there’s a lot to like.  He showed serious improvement between his junior and senior seasons.  I love his landing spot in San Francisco, as Kyle Shanahan and his staff will figure out how to use the rook.  Like most rookie receivers, he will need some polish on his route running.  However, his biggest assets are speed and yards after catch ability.  I’m not looking for much in year one, however, there could be some deeper PPR league appeal.  Long term he could be a nice flex option with the potential for much more.

What I expect this year:  Some PPR appeal as I look for the ‘Niners to create touches for him.  As he refines his routes, he could become more valuable as the season goes on.

What I expect beyond:  Solid PPR flex/WR3 with potential for much more.

This touchdown machine out of Clemson is one of my favorite dynasty rookie wide receivers.  At 6’4” 215, the body and the athletic ability make him pro-ready.  His ability to play all three wide receiver spots will help from day one.  He’s not known for his physicality, but he was physical enough to win plenty of jump balls, and I feel he will do the same at the next level.  It’s also not such a bad thing when the guy you draw comparisons to just so happens to play for the team that made you the first pick of Day two of the NFL draft.  That player being Bengals great, A.J. Green.

I love Higgins hitting Cincy at the same time as new face of the franchise QB Joe Burrow. Building that chemistry as rookies from day one will help them both in the long run. Normally I wouldn’t like him being behind A.J. Green and Tyler Boyd, but I think it benefits him to study behind these guys at the same time as learning the pro game.  Higgins becomes an instant red zone threat upon arrival.  The Bengals staff will move him around and put him in spots to succeed.  There will be a bit of rookie year production, but his future is as bright as anyone in this dynasty rookie receiver class.

What I expect this year:  His red zone prowess will make him useful, but as he becomes more familiar with the pro game, he will contribute more as the season goes on.  A lot depends upon Joe Burrow’s production, and A.J. Green’s ability to return to form.

What I expect beyond:  WR1 upside.  A.J. Green will not be around forever, and Higgins will step into that role alongside Tyler Boyd giving Joe Burrow an excellent tandem.

At USC Pittman developed into a go-to target, tallying 101 grabs for 1295 yards and 11 touchdowns.  At 6’4” 225 with 4.5 40 speed, he brought a physical presence to the Trojans, much like he will with the Colts.  He won’t be a big downfield option, but his combination of size and speed will break a big play every now and then.

Indianapolis is an excellent landing spot for Pittman, both in fantasy and real life.  He will slot in behind TY Hilton and Zach Pascal for the Colts, and should contribute right away.  Because of his size and skill set, I look for him to be one of the bigger contributors as a dynasty rookie receiver.  Pittman figures to overtake Pascal as the number two sooner rather than later.

What I expect this year:  Solid production right up there with top dynasty rookie receivers.

What I expect beyond:  PPR stud and WR2 with WR1 ceiling.

Shenault is another physical specimen at 6’1” 227 lbs.  After a standout sophomore season at Colorado, his production took a dip in his final season.  No one questions his playmaking ability, and his talent with the ball in his hands.  His durability, as well as his route running, were concerns heading into the draft.  A core muscle landed him in the second round of the draft, after being talked about as a first-rounder for most of the offseason.  Jacksonville made him the second wide receiver off the board on Day 2 of the draft.

The Jags are a solid landing spot for Shenault as he lines up beside 2019 breakout receiver D.J. Chark.  I’m not expecting a ton out of him in year one as he learns the ins and outs of the position as an NFL pass catcher.  If the Jags’ staff can figure out how to best use him, he will have some value in deeper leagues.  His ceiling is as high as anyone at the position, but he will need to prove he can stay healthy to be trusted in fantasy.

What I expect this year:  Some value if used properly and if he can stay healthy.

What I expect beyond:  One of the biggest boom or bust candidates in this class.  His playmaking ability is unquestioned.  If he learns the position he will be a dangerous fantasy asset.

Mims was a bit of a puzzling prospect coming out of Baylor.  His production in his sophomore and senior seasons saw him post over 60 receptions and 1000 yards in both. The junior season sandwiched in between saw him fail to reach 800 yards receiving and left scouts wondering if he’s fully committed to the game. He does have some issues with drops as well.  On the positive side, Mims is a big target (6’3” 207lbs), and is able to snag contested catches with the best of them.

Mims figures to see targets by default in New York.  He will settle in behind Jameson Crowder, and free agent signing Breshad Perriman.  Other than that, there isn’t much else standing in his way for chances.  Any time the Jets are in the red zone, Mims’ number will be in play. There is a chance for modest production here in year one, but Mims is a classic case of an athletic youngster who needs to polish his route running at the next level.

What I expect year one:  Plenty of red zone chances as well as a decent amount of targets by default.

What I expect beyond:  His athletic ability will earn him chances, but will need to fully commit to learning the pro game in order to be more than a WR3.  Solid dynasty rookie receiver stash.

Are you on board with Ron’s take on Rookie Wide Receivers? Then you’ll definitely want to check out his look at QBs and RBs.