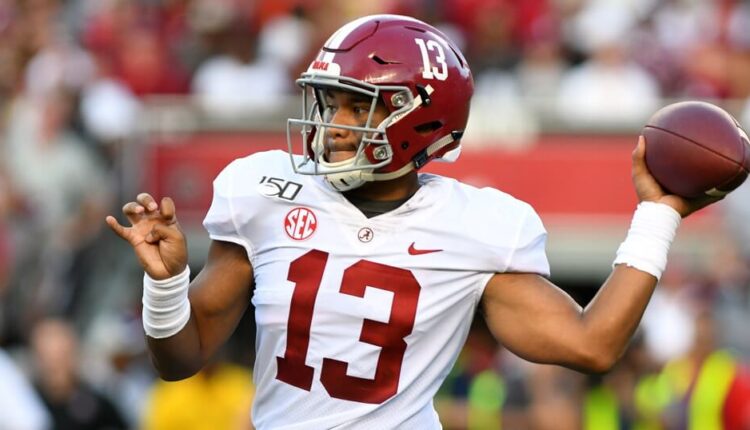 Joe the Tiger King?  Tua?  Herbert The Duck?  The guy replacing A-A-Ron?  Somebody else?  So many questions were answered at the quarterback position in the aftermath of the 2020 NFL Draft.  However, so many remain in regard to your dynasty squad.  First up, let’s dive into these dynasty rookie quarterbacks. I’m going to give you my take on the big names and leave you with a couple of under the radar signal-callers to target in the late rounds.

It was no surprise which name came off the board at pick 1.01 in the NFL draft.  Joe Burrow should easily be the first dynasty rookie quarterback taken in drafts as well.  Much fanfare has been made about the 2019 season Burrow was able to post in guiding LSU to an impressive National Championship ending.  He was able to break multiple records, as well as collect an impressive truckload of hardware, including the Heisman trophy in his final college season.  Critics have pointed out the supporting cast on the Tigers’ offense having a big hand in what Burrow was able to do.  Fair argument.  I would also like to point out this season was in the SEC, and last I checked, they are pretty good at football.

Fast forward to Burrow’s new digs.  He heads to Cincy and inherits a solid trio of receivers in veterans A.J. Green and Tyler Boyd, as well as fellow rookie Tee Higgins.  Add in a workhorse to hand the ball to in Joe Mixon, and it will lessen the pressure on the rook.  Burrow will be the starter from day one and figures to get plenty of chances to air it out. I feel what he lacks in arm strength will be made up for by the scheme the Bengals offensive coaches will build around him.  Cincy allowed the fourth-most yards in the league last season, and while they have added a few pieces on defense, they won’t be mistaken for the ‘85 Bears anytime soon.  Obviously there will be growing pains in year one, as there would be for any rookie quarterback, but there will be a lot to like as well.  In dynasty, he needs to be your backup this season.  Beyond that, he can anchor the position for your team for years to come.

What I expect from his career: Perennial Pro Bowler and consistent top-five fantasy QB

The Dolphins pick is where the intrigue began.  After weeks of speculation, the ‘Fins made Tua the second QB off the board.  While his skills were never a question, his health was.  He made a name for himself as a freshman, filling in for another rookie quarterback you may have heard of in Jalen Hurts.  Tua continued into his sophomore season posting a breakout campaign and collecting many accolades when all was said and done.  He was well on his way to a repeat of that production as a junior but was sidelined with a hip injury that ended his season.  As I stated with Burrow, when these types of seasons are had in the SEC, you take notice.

Tua takes his talents to South Beach, and normally that would be a death sentence for a dynasty rookie QB.  As bad as the Dolphins have been recently, they are headed in the right direction.  He steps into a situation where he doesn’t have to be the starter from day 1 if he’s not ready.  He definitely isn’t.  However, he will take this job at some point this season, and Tua has the talent and star power to lift those around him.  Would it shock me if he starts from day 1?  A little, but it definitely isn’t out of the question.  From a dynasty perspective, draft Tua not expecting much out of him in 2020.  Beyond that, he’s not a dual-threat on Lamar Jackson’s level, but he does enough with his legs that it will add to his value.  The ‘Fins will hopefully continue to beef up the offensive line around him, as well as give him the proper weapons to shine.

What I expect beyond: A solid starter who could blossom into a top 10 fantasy QB

Just a couple of years ago, Herbert was in the discussion as the top overall pick when he decided to come out.  He headed back to Oregon, and a couple of guys named Joe and Tua came along.  That said, being the sixth pick in the draft is nothing to sneeze at.  At 6’6”, 235 lbs.  Herbert checks all of the physical boxes.  While some scouts called him the most physically gifted passer in the draft, questions arose about his leadership qualities, as well as his ability to make big plays.  In his final season at Oregon, Herbert tossed for over 3400 yards, 32 passing TDs, and just six picks.  I don’t know about you, but I can overlook the “wow” plays, and be happy with him as my dynasty QB.

Of the first-rounders taken, Herbert falls into the best situation when it comes to supporting offensive cast.  PPR machine Keenan Allen slots in as the WR1, with physical specimen Mike Williams second in the pecking order.  Add in safety blanket Hunter Henry, as well as weapons out of the backfield and a solid defense, and it’s a recipe for success.  I don’t fully subscribe to the theory that he doesn’t jump off the film with huge plays, but I feel he is a pro-ready signal-caller and can take this job from day 1.  He is also sneaky with his legs and can move the chains as well as punch it in the end zone on the run.  He will post solid stats in his first season, but I also believe he will not be asked to put the team on his back like Joe Burrow, nor will he need to.  He is my second-ranked rookie QB and is going to be a star.

What I expect beyond: Pro Bowler who will be compared to Burrow for the rest of his career as the best QB in the class.

Love is the first-rounder with the most potential outcomes.  At different points he was linked to several different teams, and several different spots.  So far, he is most famous for being linked to the most WTF moment of the draft.  This wouldn’t be that big of a deal if the Packers hadn’t traded up to land him.  Well, it is Aaron Rodgers, and the Packers, so it would have ALMOST been that big of a deal. Rodgers was hoping for weapons in a deep WR class.  The Pack had other ideas. Love’s athleticism has never been a question at Utah State.  His 2019 dip in production has been though.  A lot of it can be chalked up to new weapons on offense as well as a new coaching staff.

Love will not be the starter unless the soon to be 37-year-old Rodgers leaves town or is hurt.  It would behoove Love to sit for a while and learn how to be an NFL quarterback.  If he does see time, Love has a talented complement of weapons in the backfield.  His wide receiver corps is suspect behind Davante Adams, who is coming off a down 2019 season.  He makes for a great stash in deep dynasty leagues if you have the room on your roster.  Expect no production out of him in 2020, and anything you get will most likely be in mop-up duty, or due to injury.  Beyond 2020, it’s anyone’s guess as to when he becomes the top guy in Green Bay.

What I expect this year:  I’m not counting on any production from Love in 2020.

What I expect beyond:  Has the tools to become a solid NFL passer.  Also some bust potential here.  Draft wisely.

You gotta love a guy who tells the GM he’s going to come to town to “compete his nuts off.”  Eason heads to the midwest after two seasons at Georgia, and a breakout final year at Washington where he threw for just over 3100 yards and 23 scores to go along with eight interceptions.  He is highly touted for his size and arm strength but lacks in athleticism compared to his fellow 2020 draft counterparts.  He is the biggest project on this list but finds himself in a perfect spot to figure out the pro game.

Eason can make all the big throws but will need to work on shorter timing routes.  He has zero mobility, so you won’t be able to count on any rushing production from him.  It could have an impact on his ability to escape pressure as well.  I would be more worried about this in any other situation, but Indy has built one of the best offensive lines in the league.  Eason also has the luxury to sit behind rental QB Philip Rivers who has been an excellent NFL starter for many years.  He is a very low risk, high reward late-round flyer reserved for deep dynasties.  He could end up paying huge dividends if he can figure out how to fix his flaws.

What I expect this year:  He could lead the league in minutes holding the Surface Tablet for the starter.  Seriously though, he won’t post any meaningful stats for at least a year, possibly more.

What I expect beyond:  An NFL starter that could be a fringe top 12-15 fantasy QB on the high side, but there is plenty of bust potential here as well.

Would be higher had he landed somewhere else.  Look for him to be used for his athleticism right out of the gate.  Beyond that, the Eagles would have to give up on Carson Wentz as the starter.  I don’t see that happening any time soon.  Intriguing to stash if you have room.

Highly touted prospect that slipped to the sixth round.  If Josh Allen can’t build on his 2019 success, he could be an interesting stash.

Could be the biggest project on this list.  Is Sam Darnold a quality starter?  Morgan may not be worth a stash, but at least remember his name if he begins to figure the pro game out.

For more help getting ready for the 2020 season, check out our full slate of Dynasty Football Analysis!

Got a beef with Ron’s Rookie Quarterback Preview? Let him know in the comments below.

Prospects to Target (Or Not) In A Shortened Season – National League