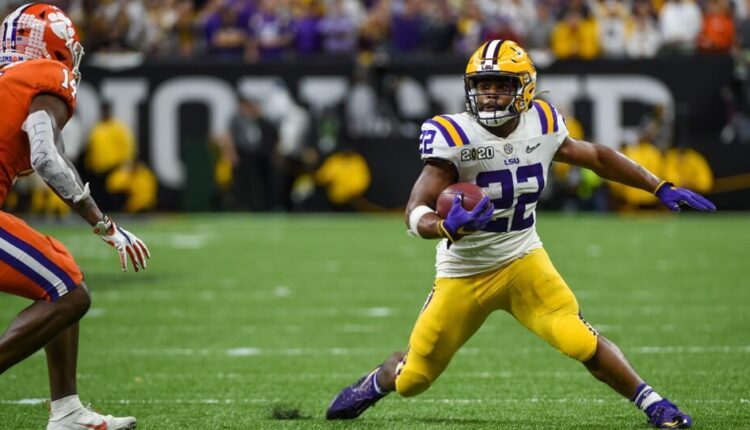 Fantasy baseball legend and fellow Indiana State Alumnus Lenny Melnick once said, “a rookie, is a rookie, is a rookie.”  What I gather from that is, they cannot be trusted in fantasy!  However, if you are looking to trust a rookie to contribute in fantasy football, running back is the position.  The 2020 draft class has plenty of talent at the position. With plenty of dynasty rookie running backs that you can feel good about inserting into your lineup both in 2020 and beyond.

If you had Damien Williams in fantasy during 2019, the price you paid didn’t justify the return on investment.  Enter Joe Burrow’s LSU teammate Clyde Edwards-Helaire.  CEH was an integral part of the record-setting season for the Tigers’ offense.  In helping lead them to the National Championship, the first-round pick rushed for over 1400 yards, and 16 touchdowns, while averaging 6.6 yards per carry.  What made him the first running back off the board, and also a great fit for the Chiefs?  Add his 55 receptions and 453 receiving yards and it makes him an ideal addition to the arsenal at Patrick Mahomes’ disposal.

Damien Williams is listed as the starter on the depth chart, but don’t let that fool you.  CEH figures to get a fair amount of work in the passing game.  I also look for him to get a healthy amount of carries on first and second down due to his low-centered agile running style.  He’s as athletic as they come, which will allow him to slot into a big role in the Kansas City offense right off the bat.  He does join an offense with plenty of weaponry, however, he has the skill to be one of the go-to-guys early and often.  His skillset and landing spot both make a strong argument for him to be the first dynasty rookie running back off the board in drafts.

What I expect beyond: A mainstay in your dynasty backfield for years to come as he builds rapport with Patrick Mahomes.  PPR stud.

Time for me to get my homer on (not really, well maybe a little)!  Taylor was a workhorse at Wisconsin, toting the rock over 900 times in his college career.  The newest Colts’ ballcarrier also has a resume that includes back-to-back 2000 yard seasons, and 55 total touchdowns.  The 5’10” 225 pounder also brings 4.39 speed to a Colts offense in need of a boost.  While his career numbers look ultra-impressive on paper, it also means he has quite a bit of mileage on the tires before he plays his first NFL snap.  I wouldn’t let it worry you as a dynasty or rookie drafter too much.

Much like Edwards-Heliare, Taylor will likely enter 2020 listed second on the depth chart.  Also much like CEH, Taylor will get plenty of run, and could be the unquestioned starter sooner rather than later.  Colts’ GM Chris Ballard wouldn’t commit to Marlon Mack beyond 2020, which bodes well for Taylor to be the guy in Indy for many years to come.  While his workload at Wisconsin is a tad concerning, Mack being around will take some of the load off Taylor’s shoulders and could give him a bit of a break in his rookie season.  Don’t panic though, as he will still see plenty of carries, but I also feel his athletic ability and work ethic will allow him to see some third downs as well.  This will translate into a few grabs as well.  There is also a strong case to be made for taking Taylor first overall in a rookie or dynasty draft and I couldn’t fault anyone for making him the pick over Clyde Edwards-Helaire.

What I expect beyond: A workhorse back that will give the Colts the consistent ground threat they have looked for since Edgerrin James left town.  As long as he’s healthy, he’s in your dynasty lineup for the next ten years.

I told you this position was talented!  The second running back drafted in 2020 was Georgia Bulldog D’Andre Swift.  NFL.com had him as their highest-graded rookie running back, albeit not by much.  Swift is another athletic back that could produce fantasy points both running and catching the football.  His skill set is more comparable to Edwards-Helaire than Taylor.  In his Georgia career, Swift tallied 73 receptions while posting back to back 1000 yard seasons in his final two years in Athens.

Swift landed in Detroit as an early day two pick.  Of the top three backs in this class, I believe he has the best setup for 2020 fantasy production.  I am one who liked Kerryon Johnson coming out of the draft a few seasons back.  Poor health and a lack of explosiveness have derailed that notion.  Johnson will still see carries when healthy, but I feel this is Swift’s job to lose.  The rook gives head coach Matt Patricia and starting quarterback Matthew Stafford a true three-down back, something the Lions haven’t been able to say for a long time.

What I expect this year:  Swift will be the starter from day one and lead rookies in rushing with 1200 yards while scoring 10 touchdowns.  Tack on 40 receptions as well and will be PPR beast from the get-go.

What I expect beyond:  He will only get better as he adjusts to the pro game and much like Edwards-Helaire and Taylor will be a mainstay in dynasty lineups for years to come.

Akers’ college career was impressive when you look at the team around him.  With subpar talent surrounding him, including a less than stellar offensive line, Akers still posted almost 1200 yards and 14 touchdowns.  He also displayed receiving ability with 30 grabs.  His athletic ability, as well his knack for moving the pile was on display since he had to create a lot of his yardage himself.  He heads into the league as one of my favorite rookie running backs and comes at a bit more of a value due to his lack of college recognition compared to the big three in the 2020 class.

Akers heads to Los Angeles to compete in a backfield that currently features Darrell Henderson and Malcolm Brown.  Todd Gurley leaving town left a need and I feel Akers has an excellent shot of winning the starting gig.  Henderson figures to get a decent amount of carries upfront since he failed to impress in 2019.  To be fair, he only toted it 39 times, so the jury is still out on what he can be.  I believe Akers is the superior talent, and should be the starter by mid-season.  At worst, he develops a solid 1-2 punch with Henderson.  Either way he will be a productive back in 2020 and beyond.

What I expect this year:  I think 700 yards and 7 touchdowns is a solid floor, with more possible if he outplays Henderson.  Add 30 grabs to that total as well.

What I expect beyond.  I look for Akers to be a productive back for a long time.  It comes down to whether he is part of a committee or ends up being the guy.  Either way, he makes for an excellent flex option in dynasty formats.

Dobbins has a similar skill set to Akers, and will have a shared role to begin with.  Once Ingram leaves town, he could take over as the lead dog for the Ravens.  Either way, he remains an explosive weapon for Lamar Jackson.  He won’t last too long in dynasty drafts, so don’t wait!

Dillon is a big dude, and much like Jonathan Taylor, scouts fear the pounding he took in college could have an impact on his pro career.  He could end up being a bit more than just the thunder in a thunder and lightning combo, but losing a bit of weight could help him add some quickness that might extend his career a bit.  Plus he comes in with Aaron Jones and Jamaal Williams already in the backfield.  He’s a bulldozer that could become a goal line scoring machine.

The cousin of former Miami Hurricane and NFL players Santana and Sinorice Moss, Zack is a different cat on the field.  The 5’9” 223 lb bowling ball looks for contact and delivers it violently.  He will be a perfect complement in Buffalo for speedster Devin Singletary.

A lot has to happen for McFarland to see meaningful playing time as a rookie.  However, this pick also tells me the Steelers don’t fully trust the stable of running backs they have now.  McFarland has the talent to carve out a solid role on third down, with tons of potential for more down the road.

The biggest project on the list.  Dallas is a high school quarterback who played both receiver and running back at Miami.  He’s raw, but has some skills that could help develop into a versatile weapon.  It may take a year or two, but there is some intrigue here.  Reserved for deep leagues only.

Got a beef with Ron’s Rookie Running Back Preview? Let him know in the comments below.