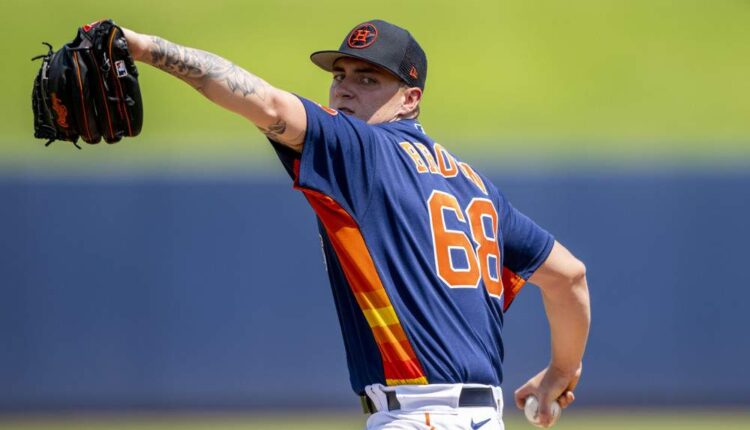 With the season winding down, we’ve had no shortage of pitching prospect dynasty risers and fallers. We’ve seen potential aces fall off, new top names emerge, and plenty of breakouts as well. I’m going to discuss many of them below and how I’m valuing them moving forward.

The dominance of Andrew Painter this season has been remarkable. Expectations were already high as a 6’7 right-hander taken in the first round of the 2021 draft, but Painter’s performance has exceeded any and all expectations for his first full professional season. In 22 starts spanning 103.2 innings, Painter has posted a stellar 1.56 ERA, 0.89 WHIP, 6.2% walk rate, and a 38.7% strikeout rate. He’s one of three pitchers in the minors this season with an ERA under 2.00, a WHIP under 1.00, a walk rate under 8%, and a strikeout rate over 30% while pitching more than 50 innings. Tink Hence and Tanner Bibee are the other two.

Painter’s advanced feel for his entire 4-pitch dynamic arsenal is phenomenal and gives him a high floor to go along with his frontline ceiling. After Grayson Rodriguez, you can make a case for him as the #2 pitching prospect in baseball, and it’s not unfathomable to expect him up with the Phillies by the all-star break next season given his aggressive promotion this season.

Speaking of Tink Hence, here’s another of that elite trio mentioned above to meet all of those statistical thresholds. Entering the season, Hence was a prospect with upside, but not ranked incredibly high on any list. Well, that’s certainly changed as Hink has dominated lo-A hitters to the tune of a 1.38 ERA and 0.88 WHIP in 16 starts with a 7.7% walk rate and a whopping 41.5% strikeout rate. He might not be the biggest guy around at a listed 6’1/175, but Hence’s arm speed is elite and allows him to hit the mid to upper 90’s with ease. Add in a plus curveball and potential above-average changeup with solid feel for all three, and you have a #2 starter in the making, maybe more. St. Louis also has had a fairly strong track record with player development over the years as well.

The Houston Astros have done a marvelous job developing prospects over the years, and their latest gem to debut has been Hunter Brown. After posting a 2.55 ERA, 1.09 WHIP, and 31.5% strikeout rate in 106 Triple-A innings, Brown has allowed only two runs through his first 15 innings with Houston. He’s in the bullpen now after two starts, but that’s only going to be for the postseason run given Houston’s incredible depth and talent in the rotation. Longterm, Brown projects as a strong #2 starter with big strikeout upside thanks to his elite fastball/slider/curve combination. And if he can trim that walk rate a tad (10.6% in Triple-A), we could be looking at a borderline frontline arm. Houston strikes again.

One could argue that the Rangers were aggressive in assigning Jack Leiter to Double-A to begin his professional career, but it’s not that aggressive. Leiter was an advanced collegiate arm and the first arm taken in the 2021 draft. The Rangers then, per usual, held him out of game action, instead opting for behind-the-scenes, back-field work at fall instructs. That’s been their MO with most arms they’ve taken, but it hasn’t seemed to work with Leiter who has struggled all season in Double-A Frisco.

After the initial struggles in May/June, I’m sure I wasn’t alone in thinking “It will get better”. Well, it hasn’t. Leiter has struggled to limit baserunners and keep his walk rate in check while missing fewer bats than expected. The stuff is still there, but it’s not like these command and control woes suddenly appeared from thin air. Leiter walked batters at a higher clip in college as well. I’m not projecting him to be a bullpen arm or anything, but you have to wonder if Leiter is more of a mid-rotation arm moving forward as opposed to a frontline arm.

When discussing DL Hall, you’ll look foolish if you doubt his pure stuff. On upside and stuff alone, Hall would be a top-5 pitching prospect without question. But if only it was that simple. If only command and control didn’t play a massive part in a pitcher’s success, especially when climbing the organizational ladder. For his minor league career, Hall has registered a 13.4% walk rate over 301.1 innings and matched that mark this season in 84.1 innings. Even sniffing 50-grade command and control would make Hall a potential top-25 fantasy arm, but the likelihood of that happening is bleak. At this point, I’m expecting him to be a full-time reliever before too long, but one that could still make a decent impact given his elite 3-pitch mix. Don’t completely write him off, but the value has dipped a bit due to that aforementioned projection.

The third and final member of the elite statistical club I mentioned above is Tanner Bibee. While other pitching prospects in the Cleveland organization have been hurt (Espino) or struggled (Allen/Battenfield), Bibee has thrived this season and put himself squarely into the #3 spot behind Espino and Gavin Williams when it comes to Cleveland pitching prospects. And since this last update, I’ve already moved him up into the top-100 overall, realizing that I had him ranked too low. Bibee has been clocked in the upper-90s this season, sitting mid-90’s with a solid slider and changeup as well. He’s been able to carve up opponents with that trio, posting a 2.17 ERA, 0.97 WHIP, and 32.4% strikeout rate between Hi-A and Double-A this season. There’s high-end mid-rotation upside here and a solid floor to work with.

Tanner Bibee was firing on all cylinders 🔥

Imagine DL Hall with 90% of the upside and even worse command and control. That’s what we have here with DJ Herz. I’m wondering if I should’ve dropped him even lower in this past update too, given the fact that Herz has been an absolute mess lately. After beginning the season with a 2.26 ERA in 17 Hi-A starts, Herz has been shelled to the tune of a 8.24 ERA in nine Double-A starts to go with a 1.80 WHIP and 20.9% walk rate. Yes, I said walk rate. Herz has issued a whopping 33 free passes in just 31.2 Double-A innings. That makes Hall look like Greg Maddux or something. Well, not quite, but you get the point. Herz already had wildly inconsistent command and control and those have only gotten worse this season, making him a risky player to roster in dynasty leagues.

If you’re looking to scoop up the next big pitching prospect, Jarlin Susana is a great place to start. Signed as an INTL free agent by San Diego and traded to Washington in the Juan Soto deal, Susana enjoyed an exciting professional debut season in 2022. In 45 innings between Rookie ball and Lo-A, Susana recorded a stellar 2.40 ERA, 1.07 WHIP, and a 36.9% strikeout rate. He did issue a bit too many free passes (11.2%) but that rate is far from alarming and he has plenty of time to fine-tune his command and control as he gains more experience. And when it comes to the stuff, Susana is electric, regularly hitting triple-digits with the fastball and mixing in a sharp slider and a changeup as well. He’s already begun rising up prospect rankings and the ascension could be massive in 2023.

Let No. 8 @Nationals prospect Jarlin Susana show you with this sonic boom for the @FXBGNats. pic.twitter.com/GYdbmcAm2g

Has it been a terrible season for Peyton Battenfield? No. But has it been incredibly underwhelming and disappointing following his 2021 breakout? Absolutely. After Battenfield broke out with a 2.53 ERA, 0.83 WHIP, and 32.9% strikeout rate last season, he’s regressed to a 3.56 ERA, 1.26 WHIP, and most notably, a 17.1% strikeout rate. Where did all the strikeouts go? Battenfield has never wowed with his stuff, but his ability to pound the zone was huge for him, and even that area hasn’t been there for him. Battenfield has seen his walk rate balloon from 4.8% last season to 8.9% this season. If Battenfield’s swing-and-miss stuff isn’t going to consistently be there, the upside is merely a Zach Plesac caliber arm.

As for Logan Allen, he’s still striking out batters at a high 31.7% clip, but he’s struggled mightily with a 6.75 ERA and 1.62 WHIP in 50.2 Triple-A innings. Out of these two, I’d probably rather take a chance on Logan Allen bouncing back given his ability to miss bats, but Battenfield is the safer play. In general, neither are great targets right now.

As I mentioned in the dynasty pitcher risers and fallers article, I’m not out on Sixto, but you have to have one foot out the door at this point. He was nasty in the minors and his 2020 MLB debut, but we haven’t seen Sánchez pitch in the last two seasons and who knows when we will again. If you roster him in dynasty, just cross your fingers for good news regarding his recovery this offseason.

You’ll notice a common theme among fallers here: command and control issues. One of the first pitchers taken in the 2021 draft, Sam Bachman was lauded for his elite three-pitch mix, but his command and control were a red flag and that red flag has gotten redder since the draft. In 43.2 innings this season, Bachman has recorded an acceptable 3.92 ERA, but with it, a 13% walk rate and only a 15.5% strikeout rate. It’d be one thing if he was missing bats at the level he’s capable of, but he’s simply not. I’m certainly not writing off an arm with this much upside, but a lot of refinement is needed here before Bachman can sniff fantasy relevance down the road. And frankly, I’m not a believer in the Angels’ player development maximizing him.