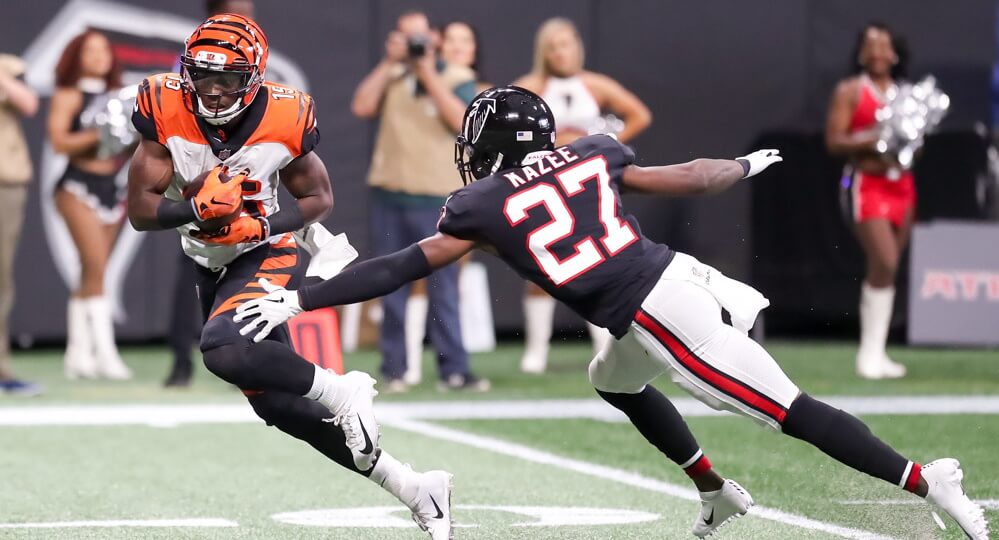 After an insufferable hiatus, we were finally treated to some real live NFL football last week.  And boy, it tasted even sweeter than I remembered.  We saw rookies impress, veterans stumble, and everything in between— I’m looking at you, Antonio.  It was a lot of football to digest, so I combed through the havoc to break down the most impactful shifts in the dynasty landscape and wrapped it up in my Dynasty Football Stock Watch.  Here goes!

Close your eyes. Go to a happy place… a calm place… a safe place. Now I want you to imagine an NFL player. Last year, this player caught 7 touchdowns on just 21 receptions for 210 yards. He averaged 10 yards per reception with a season-long of just 39 yards. Now open your eyes. Who do you see? Is it a 6’6″ 270 lb tight end? Does he have a beard? Would his coaches describe him as “country strong?”

The player is 5’11”, 194 lb burner John Ross. After being selected 9th Overall in the 2017 NFL Draft, John Ross struggled through a forgotten rookie season before securing an unlikely role as a red-zone target last season.

Well, John Ross finally broke out in a big way in Week 1 of 2019. With A.J. Green rehabbing from ankle surgery, Ross secured 82% of Cincinnati’s offensive snaps. Finally displaying his trademark explosiveness and elusiveness, Ross carved up the Seattle Seahawks to the tune of 7 receptions for 158 yards and 2 TDs on 12 targets. While this was obviously the most encouraging performance of Ross’ career, the context of his long touchdowns should be noted.

Want a video all of John Ross's targets from yesterday's breakout performance? pic.twitter.com/YRmwxZI0fV

His 33 yard TD was a complete mismatch on LB Mychal Kendricks and his 55 yard TD was an embarrassing misjudgment by FS Tedric Thompson. Those plays probably aren’t a reliable prediction for future production. Ross’ best tape consisted of his perimeter routes against CB Tre Flowers and his elusiveness and vision on screens.

If last week is any indication, expect the Bengals to find success featuring Ross on screens, outs, and the occasional deep shot. The performance was more than enough to resurrect John Ross from dynasty purgatory, but it may be best to temper expectations in line with Nelson Agholor from 2017 and 2018.

Terry McLaurin was possibly the best bargain in rookie drafts this year, capitalizing on an unusually deep wide receiver class. Selected in the third round of the 2019 NFL Draft, “Scary Terry” was drafted into an offense starved for talent. Despite the opportunity and lack of competition for playing time, McLaurin’s rookie draft ADP was an affordable 27.9.

After putting a whooping on the Philadelphia Eagles, McLaurin’s days of being overlooked in dynasty leagues are numbered. McLaurin showed the chemistry with bridge quarterback Case Keenum that he showed with pending starter Dwayne Haskins at Ohio State. He consistently gashed the Eagles with 5 receptions for 125 yards and a TD on 7 targets. McLaurin particularly made his presence felt early in the second quarter when he torched Rasul Douglas on deep post for a 69-yard touchdown.

Refusing to be typecast as a pure deep threat, McLaurin did a great job fighting back for the football on intermediate routes as well. He attacked the ball assertively, and also displayed savvy patience sitting down in the soft spots of zone coverage. All of these traits translate to becoming a stable dynasty wide receiver.

Terry McLaurin is ridiculous. Just rips the ball out of the air on a contested catch versus Ronald Darby. #Redskins #HTTR pic.twitter.com/cxOTXAOoWF

Rookie wide receivers rarely secure 93% of their team’s offensive snaps in Week 1, so McLaurin’s performance should not be ignored. McLaurin displayed a level of polish and explosiveness befitting of a veteran. Already executing at a high level and with minimal competition for targets, McLaurin owns a stranglehold on Washington’s WR1 status. It would be wise to make an offer on McLaurin while his stock is still affordable. If your league-mates are still sleeping on Terry, you could secure a McLaren for the price of a Toyota.

Donte Moncrief was targeted a team-high 10 times on Sunday Night. That is the first and last positive comment regarding Moncrief’s performance. With each target, Donte descended deeper into the depths of hell. He secured just three of his opportunities for a total of 7 yards. Woof.

Moncrief doesn’t have the kind of financial commitment that warrants a long leash. He’s signed to a two year $9M contract, which won’t prevent Mike Tomlin from giving James Washington and Diontae Johnson extended looks at WR2. With these two hungry puppies nipping at his heels, Moncrief cannot afford to post a performance like this. Eternally living off of his 2014 combine performance, Moncrief has not been able to leverage his famed athleticism to gain separation and has consistently allowed defenders to jar the ball loose on contested catches.

It’s only a matter of time before both Washington and Johnson surpass Moncrief on the depth chart. If anyone in your league knocks on Donte Moncrief, you should sell him for the best offer you can get.

Despite a promising early career, Jameis Winston has plateaued into little more than a volatile fringe starter with questionable off-field habits. Sporting a string of rape, theft, and sexual assault accusations, Winston’s skeletons are stacking up faster than his contributions on the football field.

Jameis Winston had an opening 2019 performance that can only be described as “Nathan Peterman-esque”. He consistently locked onto his primary reads, telegraphed his throws, and was careless with the football. He rebounded a bit in Week Two, but still labored to move the offense down the field for most of the game.  Given the quality of weapons in this offense, Winston still has some short-term value, but his long-term prospects seem cooked.

Jameis Winston is playing on the final year of his rookie contract and looks like he won’t be getting a second one in Tampa Bay. It wouldn’t be surprising to see the Buccaneers hand the keys to Blaine Gabbert late this year before they target a new franchise quarterback in the offseason. Should that scenario unfold, Gabbert would make an appealing waiver wire addition, as the Bucs have a solid supporting cast in Mike Evans, Chris Godwin, and O.J. Howard.

If you can convince a league mate on the upside of Jameis Winston, cut ties with him while he still has some value. While eating a “W” is always nice, sometimes you just need to swallow the “L”.

When reports of KeeSean Johnson’s camp performance started filtering in, it was difficult to take too seriously.  At that time of the year, each team has a camp darling that ultimately becomes forgotten come cut day.  After all, the Cardinals have future Hall of Famer Larry Fitzgerald, promising sophomore Christian Kirk, as well as 2nd and 4th round draft darlings Andy Isabella and Hakeem Butler.  But 6th round rookie KeeSean Johnson showed in Week 1 that he’s going to be a legitimate part of this offense.  He finished third on the team in targets and showed great chemistry with Kyler Murray, particularly on backside throws.  While 5 receptions for 46 yards won’t light the world on fire, it is often difficult for rookie wide receivers to see playing time early in their careers.  Don’t discount KeeSean’s immediate contributions, because if he’s this good already, he should continue to get better with time.  Throw a dart at him in your dynasty league.  He shouldn’t cost much to acquire (possibly free), and could wind up one of the bargains of the season.

Hopefully, you enjoyed this edition of Nick’s Dynasty Football Stock Watch. For more great analysis follow all of his work here.