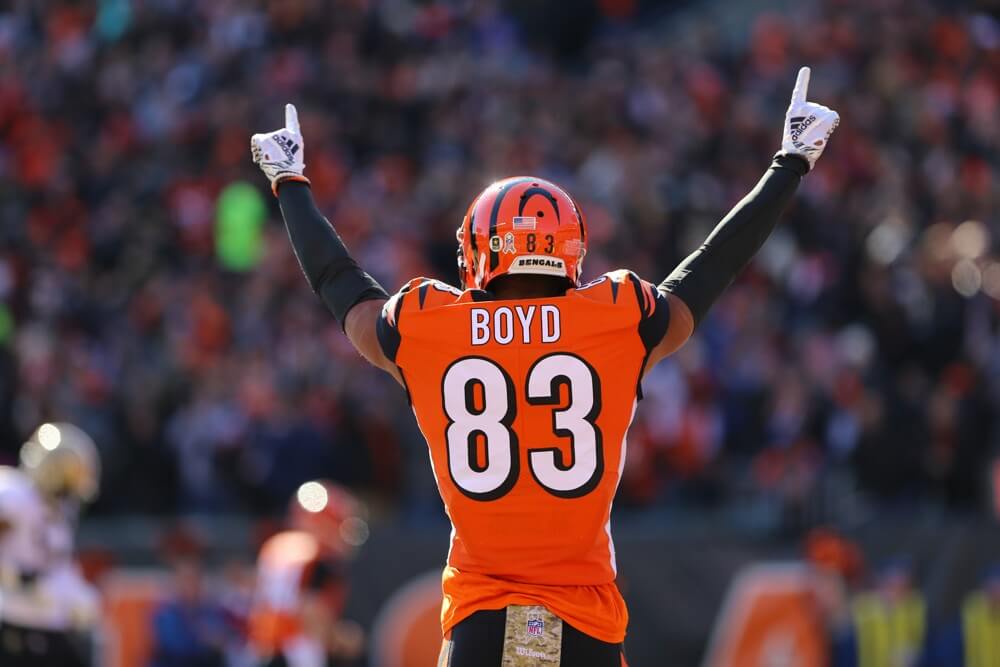 For years, the Cincinnati Bengals have been a team both highly promising and extremely depressing from a fan’s perspective. Though they’ve hit a bit of a rough patch over the last three years, finishing outside of the playoffs looking in, they haven’t been a bottom dweller. Under former HC Marvin Lewis, the Bengals made it to the playoffs for five straight seasons between 2011 and 2015 in a division with the vaunted Pittsburgh Steelers and Baltimore Ravens. While they were never quite able to do much with those playoff appearances, they have been exceptionally productive at one key fantasy football position group, wide receiver. Chad Ochocinco, Terrell Owens for a spell, and A.J. Green were (are) all at one point key annual top-12 targets at the WR position. Let’s talk about why Tyler Boyd is set to join those ranks and just how undervalued he still is in your dynasty league.

But Tyler Boyd Is A One Hit Wonder…

Is he? People often forget that it is not unusual for wide receivers to take two plus  full seasons in the league to “break out.” Boyd, for what it’s worth, fits the near exact profile of said breakout.

Per this article written by J.J. Zacharision (@LateRoundQB) on Numberfire, Boyd fits all the criteria matching the trends detailed by JJ. The Pittsburgh alum didn’t breakout out of the blue (Boyd has been steadily improving his catch percentage, target volume, air yards, and YAC throughout his career). He isn’t, and was never intended to be, his teams No. 1 pass-catcher (thus, insulating him from primary coverages while he develops). Tyler is on a “concentrated” offense (a personal term for offenses with three or fewer primary pass catchers on the team). Boyd wasn’t an injury replacement (he was the second WR on his depth chart, beating out a former No. 1 pick in John Ross). And he is also situated on a good offense.

“Even losing their starting quarterback and tight end with plenty of games left in the year, the Bengals offensive DVOA (a measure of efficiency) was middle of the pack per footballoutsiders.”

Sure. If things like that matter to you at this point. Hint: They shouldn’t.

Per playerprofiler.com, Boyd is most closely comparable to Adam Thielen. That alone should assuage all concerns. If not, then consider that Boyd’s profile becomes more enticing when viewed from an efficiency perspective. In a recent conversation with the creator of airyards.com, Josh Hermsmeyer (@friscojosh), he asserted that his WOPR metric, a numerical score derived by weighting and combining a players share of total team targets with said team’s total air yards, was an excellent way to judge WRs. Per that metric, Boyd ranked in the top 30 leaguewide in 2018. His RACR score has Boyd in the top 20. On a points per game basis last season, Tyler Boyd was the 15th ranked WR in the NFL per FantasyPros. The former boilermaker found himself above the likes of Brandin Cooks, Amari Cooper, and Kenny Golladay in that regard. He is legit.

But Boyd Was Only Good Because A.J. Green Got Hurt…

BLASPHEMY! This is an absolute fallacy. A.J. Green suffered a season-ending toe injury in 2018 and was shut down in Week 10 after the Bengals’ bye.

From Weeks 10 to 15 (before Boyd’s own season-ending injury) he produced no less than 50 yards and/or a touchdown in every game. In most PPR leagues, Boyd only missed double digits scoring weeks 33% of the time in that span by an average of less than a point. He was reliable with or without Green.

With Green, Tyler Boyd was even better.

As you can see below…

…he was able to amass his three 100-yard games and five of his seven total touchdowns. He was good all by himself but AJ drawing coverage away from him made him even better.

Still on his rookie deal, Boyd will only cost the Bengals $1.355M against the cap this year. But because he was drafted outside of the first round no fifth-year option is available. He must, and will, be extended this season and Spotrac projects his current market value at approximately $12M per season. At that figure, Boyd would have rank as the 15th highest paid receiver in the league last season. If the team is willing to invest that level of capital into a single player they very highly value them. As always preached in these articles, that should be a major indicator of how dynasty managers should value their assets.

Boyd’s current ADP according to fantasy football calculator is 6.02. Receivers taken above him include Will Fuller, Tyler Lockett, Doug Baldwin, and Jarvis Landry. If your goal is to win your league, especially if it is of the PPR variety you need to ensure Tyler Boyd does not escape round four without finding himself on your roster. At just 25 years old, his best is yet to come.

Etan Mozia has been involved with sports as a whole for over two decades and has written about athletics in some capacity since 2005. Focused primarily on the NFL and EPL, Etan has seen his work featured on sites like FantasyPros, Advanced Sports Logic, and FFD260 among others. Currently, his work is housed on FantraxHQ and FantasyPros. An avid lover of dynasty leagues specifically, you can also listen to him on his podcast, The Dynasty Diagnostic (@DynoDiagnostic), as he breaks down rosters and provides pertinent and practical advice for dynasty squads looking to give their team an edge. Follow him on twitter @FF_Wonderkid.