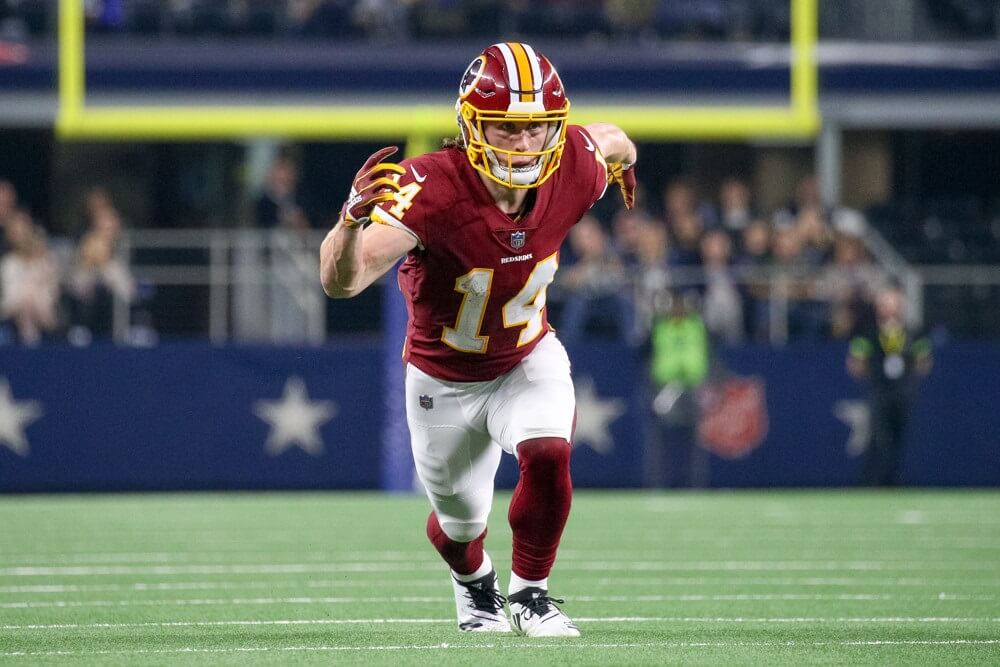 Let’s talk about PPR leagues. Why were they created and why was “standard” so quickly replaced by PPR and .5PPR leagues despite giving points for the boring, vapid, act of coming down with a ball thrown in your direction. What was the allure? I’ll tell you – projection. Its common knowledge now that touchdowns as a whole are a nearly unpredictable stat when it comes to the NFL and that oftentimes pure luck is the difference between five and 10 TDs scored in a particular season. Sometimes despite solid yardage, heavy targeting, and a clear offensive focus to shuttle the ball in a player’s direction ending that play in the endzone is a crapshoot. So instead we, as analysts can focus on PPR leagues and project opportunity as opposed to scores. What if I told you there’s a bulletproof value in the late rounds of this year’s dynasty startups and his name is Trey Quinn?

Trey Quinn is a former LSU Tiger turned SMU Mustang that dazzled with no fewer than 1200 yards and 9 touchdowns in every season in his high school career en-route to securing his status as a four-star recruit. Not given much of a chance at LSU, Quinn transferred to SMU and his junior season saw him outpace highly touted teammate, Courtland Sutton, in receptions, yards, and touchdowns in their lone season together as he put together an impressive 114 catches, 1236 yards, and 13 touchdowns in 2017. Quinn displayed his prowess in the slot that season as his 10.8yd a-DOT was reflective of a receiver often deployed underneath with a knack for making the most of his targets after the catch.

Why then did he fall to the last pick of the 2018 draft while the receiver he bested found himself to be an early second round choice? Simply put, his metrics. Quinn doesn’t boast elite athleticism as evidenced by his 61st percentile SPARQ-x score (playerprofiler), 20th percentile burst and 27th percentile catch radius.

His late breakout post-LSU cost him in the BOA department as well as performed in just the 21st percentile relative to his class. Still, his 66th percentile college dominator rating despite two lost years and +3.77% age 21 above [successful NFL receiver] market share by yards (according to Peter Howard @pahowdy) make his profile more intriguing than it might seem at first glance. If he is to be best deployed in the slot in the pros just as he was in college his 65th percentile agility score would beat Terry Mclaurin’s (his primary competition for the slot role) mark. There is something here to grasp onto.

How Will Quinn Be Used?

The two most important factors in answering this question are the history of the offensive play calling tendencies in WAS as well as the tendencies of likely new starting quarterback, Dwayne Haskins.

From 2013 through the 2018 season Jay Gruden passing offenses have largely run through the slot.

As you can see from the graphic below…

…even throwing out the context of injury riddled seasons for Crowder no WAS slot receiver has received fewer than 29% of the total targets thrown to wideouts in that offense. Nearly 90 targets are guaranteed for whoever plays the slot role in 2019 and that number could rise with Reed always an injury risk.

At just 9.1 yards per attempt in college, Dwayne Haskins was a quarterback that used his slot receiver (Parris Campbell) to devastating effect in his one year starting at Ohio State. YAC was the method with which Haskins dissected defenses at the college level and, as currently constructed, this WAS roster is primed to have him lean on that once again. With only Josh Doctson, Kelvin Harmon, and Paul Richardson at the split end/flanker positions in 2019, Haskins most cleanly separated look will likely be in the middle of the field on most passing downs. Quinn should absorb those targets.

Long term, there are some concerns about what WAS does with this group of pass-catchers as a whole. Josh Doctson is in the final year of his rookie contract and is unlikely to be granted his fifth-year extension at his current level of production. Paul Richardson’s contract is structured in a way that allows the team to save a minimum of $6.5M in savings every year after this one if he is cut or traded. Even Jordan Reed is a potential cap casualty next year as the Redskins stand to save $8M every season for the remainder of his deal by parting with him. With only Quinn and Harmon tied to this team for the long term, there is room to grow in this offense. With just the 20th most projected cap space available in 2020 and Alex Smith’s albatross contract still on the books, expect major changes in WAS in the immediate future.

Where does this leave us?

Firmly in the camp of team #buyquinn. At an ECR of just 252 according to FantasyPros, Quinn is in line to be an easy, free WR4 with plenty of upside this year and into the future. Never mind that the Redskins are also projected to have the easiest schedule  for WRs in 2019 and the path is clear for a mini Quinn breakout. Wake Up! Its time to draft Tefflon Trey Quinn.

Check out more from Etan Mozia in our full archive of Dynasty Fantasy Football content.

Is A.J. Green a Rebound Fantasy Stud or a Washed-Up Fantasy Dud?