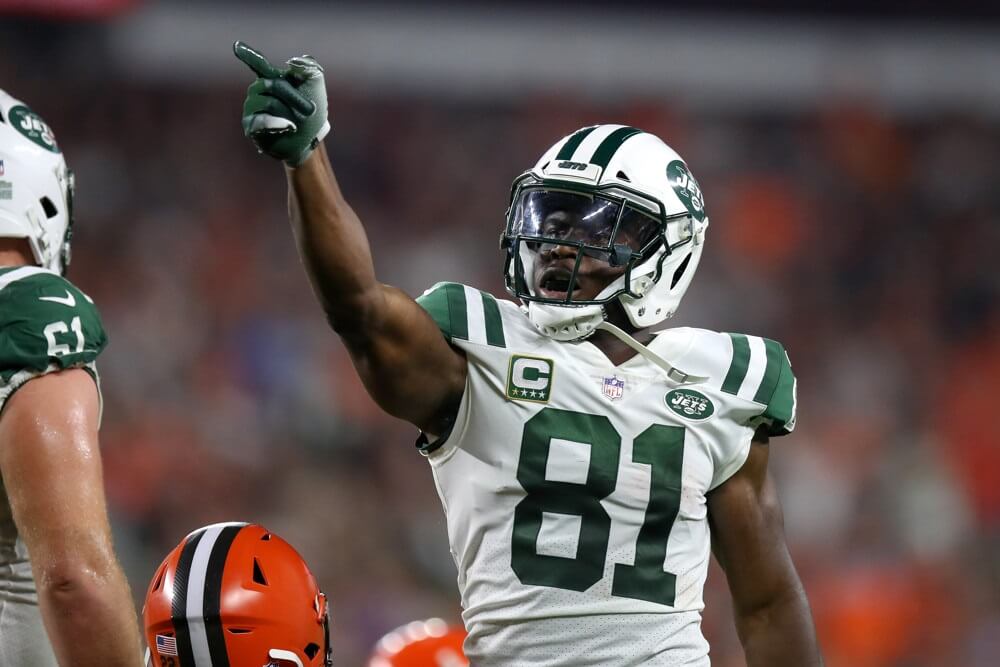 Looking for a value receiver with little name cache and boatloads of talent? His name is Quincy Enunwa, and he plays in green and white.

The New York Jets are caught right in the middle of a major transition period any way you frame it. A new head coach, a sophomore QB, and the second most cap space in the league are just a few factors that illuminate this new reality in the Big Apple. Changes are coming… and where there’s change, in dynasty leagues, there’s hidden value.

Outlook for Quincy Enunwa in 2019

We’ll Start With The Obvious…

We’ve been here before. Two seasons ago in 2016, Enunwa found himself on an uninspiring JETS squad as the third component of an underrated WR depth chart. Stuck behind the original “BD” titled BD-Decker (before QB Nick Foles took the mantle) and Brandon Marshall, little was expected from the young receiver out of Nebraska. But those patient enough to endure the sixth round pick’s extremely limited first couple of seasons were handsomely rewarded with his breakout 857 yards and four TDs (in just 13 games). We forget that Enunwa, for all his injuries, still tested as a legitimate size speed freak. Dynasty managers that took a shot on him did so with the understanding that he brought a 116.3 (96th percentile) size adjusted speed score and 84th percentile college dominator to the table (https://www.playerprofiler.com/nfl/quincy-enunwa/). But alas, a serious neck injury turned Enunwa’s career on its head and he missed the following 2017 season.

When Enunwa returned in 2018 many expected him to once again be a strong value play who. And for a time, he was. From weeks 1-4 , Enunwa was a huge part of the JETS offense as he was targeted a total of 37 times (9.25 TGT/G) as the main slot outlet for then rookie Sam Darnold. Though Enunwa’s 7.51 Y/TGT during that stretch was admittedly low, his Jarvis Landry-esque usage made him a valuable piece of any PPR squad. This changed in week 5 however, and Enunwa was moved out of the intermediate slot receiver role in favor of featuring Jermaine Kearse. An ankle injury in Week 6 sealed his fate as Enunwa wasn’t able to regain his momentum throughout the remainder of the season.

Perhaps a level of offensive incompetence played a role in Enunwa’s sudden role change. Maybe it was an attempt to further utilize the mercurial receiver’s speed. Regardless, the move did him a disservice as his best attribute was miscast in a role on the outside. Enunwa wins with his YAC and his 4.0 YAC/Rec was a top 36 mark in 2018. In his relatively injury free 2016 season, Enunwa was able to add a further two yards to his average YAC. In the same manner as Golden Tate, he is able to fully embrace his role as a ball carrier as shown in this clip:

What About Per Target Value…

When looking at Enunwa’s efficiency metrics one cant help but also be impressed. In 2019, his 0.89 RACR score was ranked 24th leaguewide (with 50+ targets). Even in a down season the JETS receiver exhibited an innate ability to add value to the targets he received. This mark is just below the 0.91 RACR score Enunwa reached in the 2016 season. Even with his low 2018 aDOT, his 0.41 WOPR rating, which instead weights target share against total team air yards was also a top 50 mark (50+ targets) among all pass catchers.

As ridiculous as it is to admit, Adam “Crazy Eyes” Gase should also have a positive effect on Enunwa’s performances this coming season. Throughout the 2016 and 2017 seasons in Miami, Gase-led teams targeted the slot man (Jarvis Landry) 27.7% of the time. As a point of reference, Antonio Brown who had the league’s seventh best target share percentage in 2018 managed a 26.7% target share. News of Gase wanting to expand Enunwa’s route tree  should only further the possibilities.

With a wide open depth chart currently only populated by the recently 2nd round tendered Roby Anderson, Rishard Matthews, and potential practice squad level talents like Charone Peake and Deontay Burnett Enunwa will be the big fish in his small pond. Even if another receiver is brought in (as is likely with a reported $102M of cap space), their usage would be on the outside, and they wouldn’t threaten his role. The JETS showed their intentions for Enunwa when they signed him early to the extension below.

As you can see from the contract details, Enunwa won’t net the JETS a significant cap savings until the 2021 season at the earliest. Couple this with the fact that the $36M deal makes Enunwa the 24th highest paid wide receiver on a per annum basis and it becomes clear how invested NYJ is in their oft injured star.

Do your research outside of this or simply take the hint. Enunwa’s bottom of the 10th round ADP is massively underselling him and you would be wise to invest in a player with his talent level.