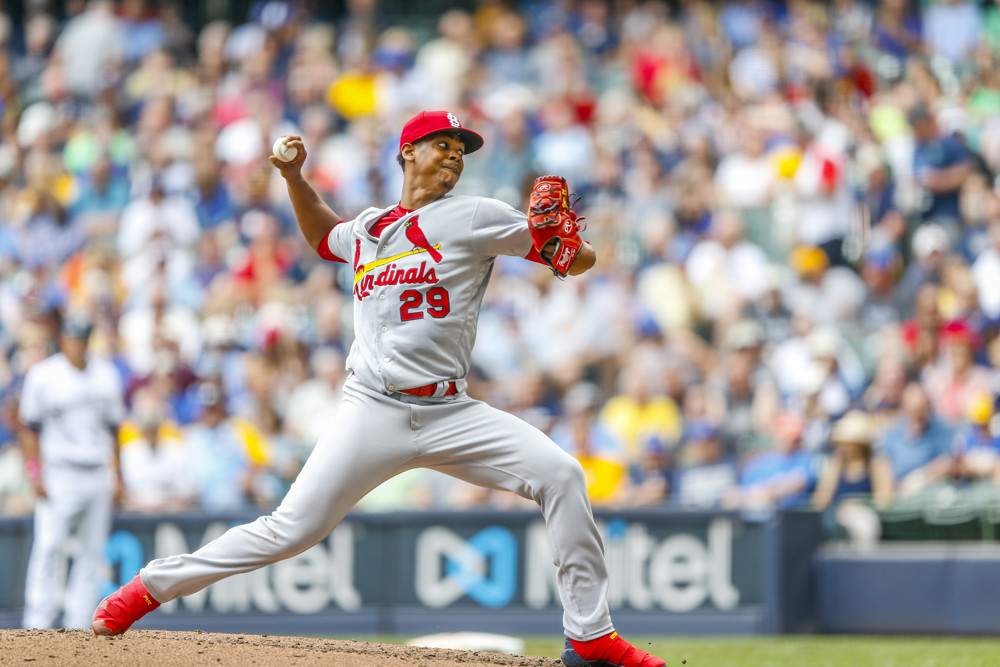 Some of the best moves an owner can make in dynasty leagues are acquiring a player when their value lower than their potential. This can be due to a number of reasons, but the main two are injuries or poor performance. Or sometimes both. There are many prospects that fit this mold right now, but four stand out to be the most. Two have made their MLB debuts already, while the other two are a couple of years away. Due to a combination of poor performance or injuries, these four prospects make for strong buy-low candidates in dynasty leagues.

I’ve been trying to figure out who I’m more frustrated with right now. On one hand, the Rockies for some reason hate their young players and won’t give them consistent playing time. On the other, Garrett Hampson has done literally nothing during the regular season to warrant consistent playing time. After Sunday’s 0/4 performance, Hampson is now hitting a lowly .173 with one home run, one steal, a .459 OPS, and a 21/2 K/BB ratio. Yeah, not good. Why are you doing this to me Garrett?! I hyped you up all pre-season for this? Thanks a lot.

Sorry about that. Now that I have my emotions back in check, let’s talk about why Hampson is being included here, outside of his lackluster start to the season. The tools that caused me to hype him up haven’t eroded and disappeared. They’re still there and still lead me to project a bright future for Mr. Hampson. Those tools being his hit tool, speed, and plate approach.

Throughout his entire minor league career, Hampson displayed plus contact skills, an advanced plate approach, and plus speed. Those tools, plus his high baseball IQ both at the plate and in the field, should help him turn into an above-average offensive second baseman and potentially a long-term top of the order weapon. This season has been a headache for Hampson owners, but have faith that greener pastures lie ahead for the Rockies rookie.

I feel rather confident saying that this is likely the lowest his dynasty value be moving forward. So now is an ideal time to pounce on the inpatient Hampson owner in your league.

For more on Hampson, check out last week’s Fire & Ice from Nathan Dokken.

Rookie ball numbers obviously don’t tell the whole story, but if you watched Ramos play, it was hard not to get excited about his future potential at the plate. Fast-forward to 2018 and Ramos finished with a .245/.313/.396/.709 slash line in 485 Single-A at-bats in the South Atlantic League. His swing and miss tendencies followed him to Single-A, but did improve to a more reasonable 25.4%. While at the surface, his 2018 was nothing to write home about, we have to keep in mind that Ramos was the youngest player in the South Atlantic League, playing the entire season at 18 years old.

When you watch Ramos, his lightning-quick bat speed and easy plus raw power are the first things that stand out. That raw power has yet to translate into big home run totals mostly due to his lower fly ball rate, but if he can add start hitting the ball in the air more regularly, 30-plus homers is a possibility. And so far in 2019, that has been the case as Ramos’ fly ball rate has jumped from 31.5% to 46.7% through his first 63 at-bats in the High Class-A California League with five home runs.

Another improvement for Ramos in 2019 has been his plate approach. After recording a 6.6% and 6.5% walk rate in 2017 and 2018 respectively, Ramos has improved that drastically to 16.9% this season while dropping his strikeout rate even more down to 24.1%. It’s a small sample size for sure, but very encouraging to see.

Due to his subpar 2018 numbers and currently being on the IL for the next month or so with a knee injury, now is a great time to make a buy-low offer on Ramos in your dynasty league before the Ramos owner realizes that those 2018 numbers mean almost nothing and there’s still a world of talent here. There are still some kinks to be worked out with his contact skills and plate approach, but Ramos is heading in the right direction.

I know he’s not technically a prospect anymore, but he’s close enough that I’m going to include him here. After allowing five runs in three innings with the Cardinals, Reyes was optioned down to Triple-A Memphis on April 6th. Three weeks later, he’s leaving Triple-A to head down to extended spring training to work in a low-pressure environment after punching a wall following his last start, fracturing the pinky on his non-throwing hand. The silver lining is that it was on his non-throwing hand. But this is far from an ideal situation for the Cardinals prized arm.

This latest issue is just another turn in the roller coaster ride that has been Reyes’ career. Multiple big injuries, including TJS and rotator cuff surgery, have kept Reyes on the prospect scene even though he made his Major League debut back in 2016. We know the talent is there. That’s never been questioned. It’s just the durability, and now, between the hears that is holding Reyes back. Fellow prospect analyst Matt Thompson of Prospects Live and FWFB said it best when referred to Reyes as a “Million dollar arm, 10 cent head.”

But let’s focus on the positives for a second. Like I said, Reyes is a phenomenal talent with ace-level stuff. He’ll sit in the mid to upper 90’s with plenty of life on his fastball and mixes in a hammer curveball around 78-81 mph, a tight mid to upper-80’s slider, and an upper-80s changeup with fade. When he’s throwing them well, all three of those secondary offerings are plus to go along with the electric heater. The command has been inconsistent throughout his minor league career but seemed to be improving of late.

A positive here is that the Cardinals still view Reyes as a starter long-term. They’d be foolish not to, to be honest. This is one of the most electric arms to come through the minors over the last several years and there’s still ace upside if Reyes can put it all together.

The last time we saw Wander Javier in minor league game action was around 1976. He wasn’t born until 1998, but you get the idea. In all seriousness, Javier hasn’t played in a minor league game since 2017, missing the entire 2018 season recovering from shoulder surgery. After missing this much time, it’s difficult to project how he’ll look upon his return. So instead, we have to focus on the tools we saw from Javier before the injuries started to pile up. And oh boy, were those tools impressive.

On the offensive side of the ball, Javier’s tools were loud. He showed above-average to plus contact skills and raw power with enough speed to project double-digit steals down the road, even with some regressions as he fills out. It was still very early in Javier’s career, but the raw tools projected to a .280/25/15 type of shortstop. The injuries and subsequent time away have surely dropped Javier’s price in dynasty formats. Now is the time to capitalize.