Craziness creates change. That could mean good change or bad change, but change nonetheless. The 2020 MLB season and current fantasy baseball landscape are perfect examples of that. The craziness of a shortened season and COVID pandemic world have sent many player’s fantasy values shooting one way or another. It almost reminds me of the end of Willie Wonka when he’s telling Charlie, “It’s a Wonkavator. An elevator can only go up and down, but the Wonkavator can go sideways, and slantways, and longways, and backways…” With players’ values going haywire following 2020, this is a great time to capitalize on some dynasty buy-low targets. Today, we’ll be discussing several outfielders to try and trade for before their values rise or return to previous levels.

Also, make sure to check out the Five Tool Fantasy Baseball Podcast and Fantrax Prospect Toolshed every week for more prospect talk.

Depending on your league settings, Yordan Alvarez might not be eligible in the outfield, but I’m going to include him anyway.

Stop. Stop that right now. That’s all I’ve heard this entire offseason is that people are scared away due to him having surgery on both of his knees. Do you know what else I’ve heard? Plenty of positive and optimistic reports about his knees.  On the Five-Tool Fantasy Baseball Podcast last week, we had Dr. Nic Civale, a licensed Physical Therapist and Fantrax Injury Writer, on the show to discuss a ton of injuries heading into 2021, headlined by Alvarez. Here’s are two quotes from Dr. Civale from the podcast:

I think a lot of people are overreacting a bit to the news of his knee surgeries.

If you want the full, detailed breakdown of what Dr. Civale had to say on the pod about Yordan’s knees, check out the full episode.

Does he sound worried? Nope, he sure doesn’t. And like I mentioned above, all the reports this offseason about Yordan’s progress have been positive. In fact, he posted an Instagram story yesterday showing him running the bases. I know he’s not relied upon for his speed, but these reports should calm the concerns about his knees heading into 2021 and beyond as well. He’s also mostly going to DH which will definitely help reduce the wear and tear on his knees. It’s not like Yordan is a shortstop or center fielder or something.

A Yordan Alvarez update from his Instagram story. He’s running the bases. pic.twitter.com/RFrnzvcNwc

Now, let’s get past his knees and onto his majestic offensive skills. From his MLB debut (6/9/19) through the end of the 2019 season, Alvarez was one of the best hitters in the game. Period. In 87 games, Alvarez slashed a ridiculous .313/.412/.655 with 27 home runs, 78 RBI, and 58 runs scored. That’s damn impressive and looks even better extrapolated out over 162 games or when combined with his 2019 Triple-A numbers.

The dominance went far beyond his surface stats too. If you saunter over to Alvarez’s Baseball Savant page, you better have an oven mitt on your clicking finger because his page is straight fire. 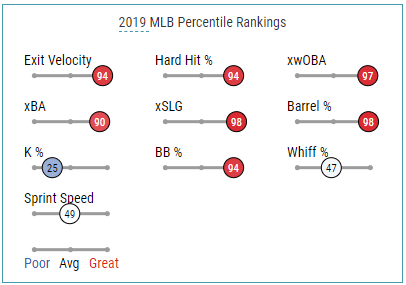 Damn, that’s a lot of red. See all those numbers highlighted in red? Well, every one of them was in the top-6% of the league, except for the xBA whish was still in the top-10%.

So, let’s recap quickly before moving onto the next player.

That’s all a recipe for a great buy-low opportunity for a four-category monster that I still have inside my top-25 overall dynasty rankings. It’s impossible to tell how many games the 2021 MLB season will be, but there’s a great chance we see Yordan bounce back to a .300/40 pace with plenty of runs and RBI as well.

Man, that was a rough debut for Jo Adell. I could try and sugar coat it a million different ways, but Adell flat out stunk and wasn’t even worthy of a roster spot in fantasy leagues. In 38 games and 132 plate appearances, Adell could only muster a .161/.212/.266 slash line with a gut-wrenching 41.7% strikeout rate. It doesn’t get much better when looking at his Baseball Savant page either. Outside of a 78th percentile exit velocity and 98th percentile sprint speed, Adell had a bad case of “blue balls” and ranked in the bottom-20% in xBA, xSLG, whiff rate, walk rate, and barrel rate, with the first three ranking in the bottom-10%. 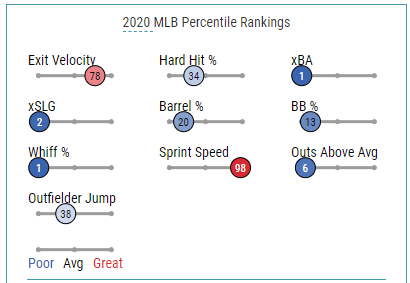 Nope, you can’t chalk it up to bad luck when you had a .175 xBA and .291 xSLG. On top of that, Adell struggled against all three pitch types, posting an xBA of .220 or worse and a 39.9% whiff rate or higher against each type of offering.

Jeez Eric, you’re not making me want to buy into Adell here! Just you wait, I’m getting there. The thing with Adell is that he’s started slow at basically every level along the way. Included in that is his brief Triple-A stint at the end of 2019 when his huge power/speed blend went into hibernation. In a normal 2020, Adell likely would’ve started at Triple-A, probably made his usual adjustments, and then debuted with the Angels mid-season.

While the production to end 2019 and in 2020 is far from promising, the talent here is undeniable. I witnessed Adell take batting practice in the fall of 2019 out at the Arizona Fall League and it was a majestic display of absolute bombs to all fields. Adell has the power to approach 40-homers over a full season and has plus speed to pair with it. It’s all going to be up to how much he wants to run and if the hit tool/approach can improve.

From what I’ve seen in the minors, I’m a believer in that happening. When you can get a potential .280/40/20 fantasy monster at a discount via trade, you pounce on that every damn day and twice on Sunday.

Usually, when you see a player’s strikeout rate rise, you instinctively think they chased more pitches outside of the zone. Well, that wasn’t the case with Soler in 2020. Most of his contact and swing metrics nearly mirrored his 2019 campaign, with the exception of his Z-Metrics.

Soler simply wasn’t as aggressive in 2020, which is very noticeable by his 58.7% Z-Swing% after two years of 68% or higher. Coincidentally, those two seasons were the two best of Soler’s career since his 24-game rookie debut, including his monster 2019 campaign. Don’t forget, Soler is one shortened season removed from a .265/.354/.569 line with 95 runs, 117 RBI, and an American League-leading 48 homers. The 2020 season wasn’t all bad for Soler either, especially when you look at his statcast page.

There’s a fair share of red on his page when looking at his quality of contact metrics. Soler ranked in the 93rd percentile with his 92.5 mph exit velocity and 51.1% hard-hit rate, and in the 99th percentile with his 18.9% barrel rate. Only Miguel Sano and Fernando Tatis Jr had higher barrel rates than Soler in 2020. He even finished one spot ahead of the great Juan Goato Soto!

Soler’s 2019 performance was far from a fluke and he hit the ball just as hard or even harder in 2020. If Soler can return to his previous forms of aggression, another 40-homer campaign is very much within reach.

While COVID affected many around baseball in 2020, you could argue that none were affected more than Austin Meadows. Coming off an all-star appearance in 2019, Meadows came down with the virus before the season and was never the same after. Playing in just 36-games, Meadows slashed a paltry .205/.296/.371 with four home runs and two steals. He even said that he didn’t feel right all season and couldn’t prepare the same way. That’s huge for a baseball player when feel is everything.

The price tag for Meadows has dropped considerably due to his 2020 performance, which isn’t overly surprising. However, that performance was COVID related and not necessarily because Meadows struggled or regressed. Will he return to that lofty 2019 level? Maybe not. But a nice bounce-back season should be in store for the talented Rays outfielder who is still only 25 years old.

Others to Consider Buying Low

Andrew Benintendi, Boston Red Sox: Nobody wants Andrew Benintendi right now. Literally no one. There’s a rumor that he’s even a free agent in the Benintendi family dynasty league right now. With his price at rock bottom, now is a good time to actually buy Benny. I’ve been critical of him on multiple occasions over the last couple of years, but he’s not THIS bad. Returning to his early-career levels is likely a long shot, but there’s no reason why Benintendi can’t post a .260/15/15 type of line with solid runs and RBI totals hitting in Boston’s lineup.

Victor Robles, Washington Nationals: The former top prospect has been a common punching bag so far in his career due to his lowly exit velocities. In 2020, only Omar Narvaez and Ender Inciarte had a lower AVG EV than Robles’ 82.2 mph mark. You can take out bunts or look at his EV on FB/LD too and it’s not much better. None of that is encouraging, but Robles will still be able to get into double-digit homers due to his launch angle and has the wheels to steal 25-plus bags annually as well. While he might never reach the lofty upside that he showed as a prospect, .260/10+/25+ is still well within reach for Robles year in and year out.

Taylor Trammell, Seattle Mariners: It wasn’t too long ago when Taylor Trammell was considered a top-25 prospect in baseball. But a prospect’s stock can deflate just as quickly as it inflates. Case in point, Trammell’s 2019 season where he slashed just .234/.340/.349 in 126 Double-A games. This after hitting between .277 and .303 in his first three seasons as a pro in the Cincinnati Reds system. I’ve moved him down my rankings a tad, but not a whole lot as I’m still a believer in his skills and athleticism. Trammell might not hit more than 10-15 home runs, but he’s shown above-average contact skills, plus speed, and an advanced approach at the plate that has led to a 12.2% walk rate and .363 OBP in the minors. The future is still bright here, so I’d highly recommend buying low in dynasty leagues right now while his price tag is reasonable.