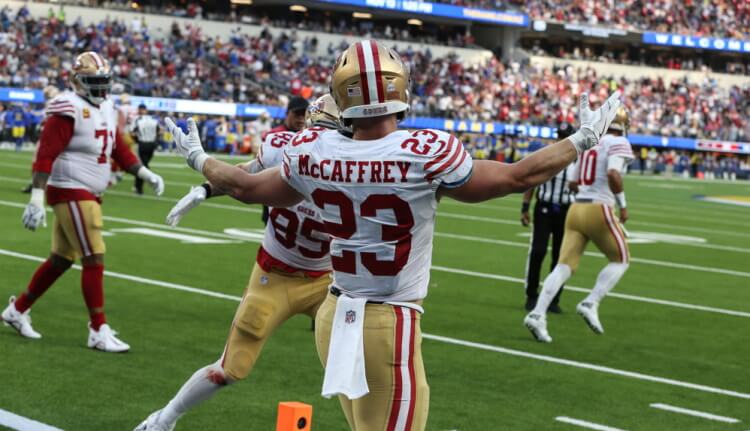 Okay, so week 1 of playoff football was pretty boring and uneventful… not.  The games are only going to get more intense from here on out. With fewer team and thus fewer players to choose from every decision becomes amplified. Hopefully my fantasy football rankings for the divisional round can help you make the right decisions and you’ll come out in the green this weekend.

What!? Your fantasy football league wasn’t hosted on Fantrax this season!? Once you see how Fantrax stacks up to the competition, we think you’ll be singing a different tune next season.

After the cancellation of their last meeting, one can imagine Josh Allen is going to be on another level against the Bengals in the Divisional Round of the NFL playoffs. However, after a bye, and also at home, I have Patrick Mahomes as the top quarterback this weekend. The Jacksonville Jaguars have allowed the sixth-most passing yards this season. Patrick Mahomes led the league with 5,250 passing yards.

Jalen Hurts is not on the Eagles’ injury report as he prepares for his second playoff appearance. He will play at home and has a better matchup than Joe Burrow, giving him the edge for the Divisional Round rankings.

The Kansas City Chiefs defense is at the top of the league in passing touchdowns allowed this season. Trevor Lawrence and the Jaguars are 8.5-point underdogs in a game with the highest Over/Under of the Divisional Round. Trevor threw 47 times last week and should be just as busy as the playoffs continue.

Brock Purdy is averaging just 23 pass attempts while on his seven-game win streak as the 49ers’ starter. He remains touchdown-dependent for fantasy football purposes. I’m not taking away from what he’s done, but the 49ers did average over 10 yards after the catch per reception last weekend. His weapons have a tougher matchup against the Dallas Cowboys for the Divisional Round.

Christian McCaffrey at the top. Duh.

In Week 14 against the Philadelphia Eagles, Saquon Barkley rushed for 48 yards. After logging over 100 all-purpose yards and scoring twice last weekend on 17 opportunities, it’s hard to think he doesn’t redeem himself against Philly in a Divisional Round matchup.

Jalen Hurts is not on the injury report, but he should still be handing the ball off plenty to Miles Sanders. New York allowed over 5.24 yards per carry to running backs this season.

The San Francisco 49ers are THE toughest matchup for opposing running backs. Tony Pollard passes the eye test for which Cowboy back should log the most touches. Ezekiel Elliott is as touchdown dependent as ever this weekend.

Deebo Samuel is a top-five play at wide receiver for the Divisional Round after showing off his speed, and health, last weekend, specifically out of the backfield. Brandon Aiyuk is averaging nearly seven targets per game with Brock Purdy at quarterback.

Isaiah Hodgins is the Giants’ top receiver as of this moment. He has scored a touchdown in five of their last six games including each of their last three. Hodgins is averaging 20.52 points per game over that span as a result.

Gabe Davis has a total of 14 receptions for 314 yards and five touchdowns on 19 targets in his last two playoff games. He is the obvious WR2 in a crowded Buffalo offense.

Michael Gallup is averaging nearly six targets per game over his last four. He logged 40 receiving yards last week for just the first time since Week 14, though.

No, Travis Kelce hasn’t found the end zone since Week 11. Yes, he is still the best tight end in the NFL playoffs until the Chiefs season is over, for better or worse. Don’t overthink it. Gerald Everett caught six passes for 109 yards and a score against the Jaguars last weekend. On the other side of this game, Evan Engram gets a Chiefs defense that allowed the fourth-most touchdowns to tight ends this season. He is coming off of a game with a 7/93/1 stat line on 11 targets.

The New York Giants rank inside the top-1o in receptions, yards, and fantasy points allowed to tight ends. Welcome to the playoffs, Dallas Goedert!

Dalton Schultz should come back down to earth in the Divisional Round. After leading the position with a whopping 28.5 fantasy points last weekend, he has a tough matchup in San Francisco on Sunday. I have him sixth in my rankings. After him, the talent drops off considerably. He’s the worst of your best options. It’s worth noting, though, that Hayden Hurst was tied with Tee Higgins for second in targets (6) last weekend.