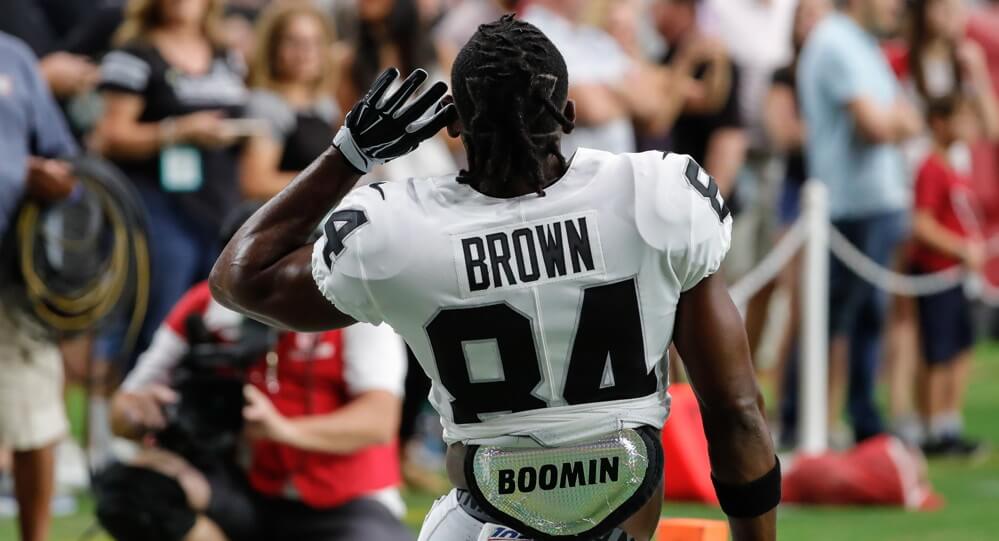 Ahead of a pivotal slate of 2020 Week 7 football, the NFL headlines turned back the clock and gave fantasy football owners two former pro-bowl wideouts to keep a close eye on. With the moves made by the Super-Bowl-contending Baltimore Ravens and Tampa Bay Buccaneers to acquire Dez Bryant and Antonio Brown — it’s like we’re back in 2014 with both visiting the headlines of the league. We’ll discuss both acquisitions briefly and how you should view their fantasy value, depending on what you need to win your league in 2020.

The #Ravens plan to sign veteran WR Dez Bryant to the practice squad if his workout goes well and he passes a physical, source said. Baltimore previously worked out Bryant in August, so this is more of a check-in. He should land in Baltimore, finally.

In an 8-season career with the Dallas Cowboys, Dez Bryant averaged 4.7 receptions and 66.0 yards per game and he had his best season in 2014, when he led the league in touchdown catches with 16 and averaged 82.5 yards per game. Bryant was one of the best athletes in the NFL and was a threat to score on every time with his leaping ability, dangerous burst, and elite catch radius. He had a knack for the deep play that ended with a score. In fact, his last score in the NFL was a 50-yard touchdown reception from Dak Prescott in December 2017.

However, after the New Orleans Saints signed him to a one-year deal midway through the 2018 season, it took just two days on the job for Bryant to tear his achilles tendon during practice, ending his season without taking a snap in the NFL. He spent the following season rehabbing and working on getting into football shape.

Here we are in 2020 with very few pleasant sights in the world, let alone the NFL and its long list of injured players, and Dez Bryant looks to be healthy and confident in his ability to be productive in an NFL game. In fact, Bryant has been spotted throughout the year on social media looking like his old self in football and basketball videos. Of course, being in shape to contribute to the Ravens is still not guaranteed as he is nothing more than a practice squad roster member at this point. 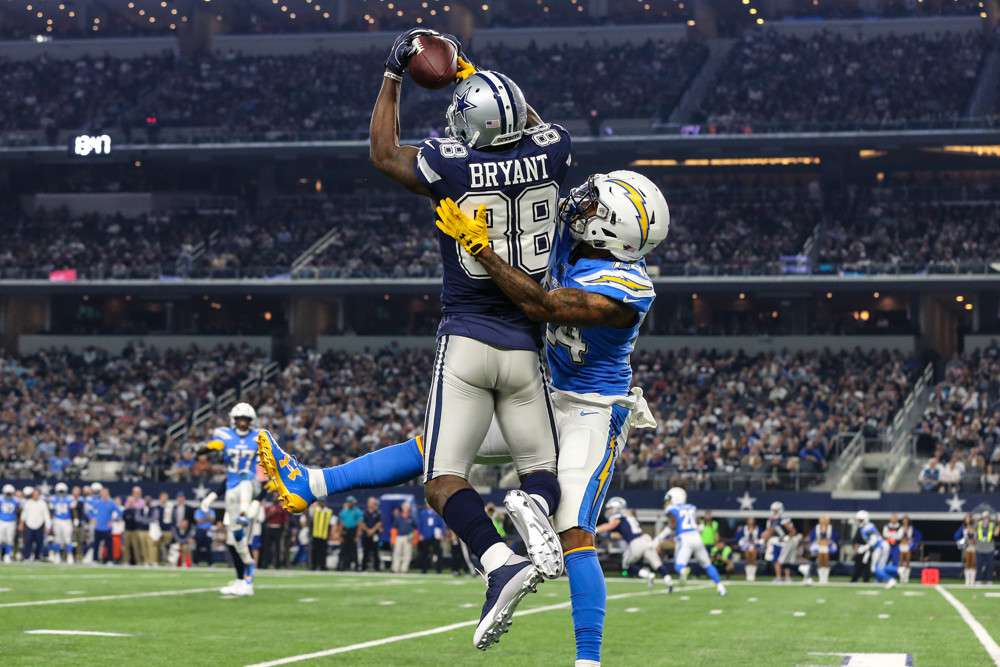 So what should you do with Dez Bryant? In shallow leagues where roster spots are a premium, the wide receiver position is not one that requires deep dives into practice squads, so Dez Bryant’s possible upside shouldn’t be a priority for you. However, if Bryant, who worked out for the Ravens multiple times including before the season, does end up making the team, he has the opportunity to be fantasy-relevant.

The Ravens have the reigning MVP at quarterback who also happens to be the only fantasy-relevant member of the Baltimore backfield. They also have two fantasy-relevant pass-catchers at this point, sophomore wide receiver Marquise Brown and the red zone menace PPR TE4, Mark Andrews. It’s clear that the Ravens view pass-catching as an area of need and for good reason. Through 7 weeks of the 2020 season, the Ravens rank 28th in the NFL in pass success rate (by percentage) to wide receivers and are just middle-of-the-pack in targets to wide receivers.

If Bryant makes it to the team and gets snaps at WR, it’ll be because they believe he can contribute in their offense despite not playing in the NFL for nearly 3 years. Furthermore, if he finds himself on the NFL team, he poses upside that could find him in your starting lineups against select matchups.

As of now, Lamar Jackson is third in the NFL in average depth of target (also known as yards per attempt) by qualified quarterbacks and he’s thrown 5 of his 10 passing touchdowns on the season to Mark Andrews, who is tied for fifth in the NFL in receiving touchdowns (first amongst tight ends). The addition of Bryant to the team would mean a dynamic duo of deep threats in Brown and Bryant. Against matchups such as the Cowboys (Week 13) or Brown (Week 14), Bryant has touchdown upside but shouldn’t eat up a noticeable chunk of the targets that regular head in the direction of Mark Andrews, who will continue to be the biggest threat to catch a touchdown when the Ravens are in the red zone.

For you, what this means is that if you anticipate needing more depth at wide receiver and are in a deep league, stash Dez Bryant in case he makes it to the team, unless you own Marquise Brown. If you are in a league with FAAB, don’t empty the kitchen sink (or even spend more than a minority of your cash on him) because the chance that he doesn’t see the field at all for Baltimore is quite substantial. In shallow leagues, if you need wide receivers, look for safer floors because the WR position is deep and each week, someone seems to emerge at the position to target in free agency or the waiver wire. In fact, we at Fantrax often have you covered on that front as well.

Breaking: Antonio Brown and the Buccaneers have reached agreement on a one-year deal, sources tell @AdamSchefter.

Language still has to be finalized, COVID protocols passed, but Brown is likely to make his Bucs’ debut in Week 9 against the Saints. pic.twitter.com/K14eD7tt0n

The big bomb on NFL Twitter ahead of Week 7 was clearly this one. A character that can puzzle you into oblivion has scarred the legendary career of Antonio Brown. Yet, Tom Brady, who played one game with him in the 2019 NFL season, pushed for Tampa Bay to acquire the elite on-field attributes of Brown and put the league on notice. If Brown’s physicals go well, he is in line to suit up for the Buccaneers Week 9 against the New Orleans Saints — for now.

In Brown’s 9-season career with the Pittsburgh Steelers, he was a 7-time Pro Bowler, 2-time receptions leader, 2-time receiving yards leader, one-time receiving touchdown leader, and one-time yards per game leader. He averages over 100 yards per game three times in his career and was a fantasy monster in every format through the 2018 NFL season. At just over 30 years old, Brown already ranks 22nd amongst wide receivers all-time in Pro-Football-Reference Hall of Fame Monitor. If there were doubts about time off affecting his talent and athleticism, his one game with the New England Patriots in 2019 slammed the brakes on that notion. In that game, he made four catches, registered 61 scrimmage yards, and caught a touchdown.

But how does this history translate to his new home in Tampa Bay? I asked that very question to my followers following the signing and here is how you all responded.

Antonio Brown is a Tampa Bay Buccaneer and he is in line to make his debut Week 9 vs. the New Orleans Saints. Assuming this holds true, what do you expect in Week 9 out of his debut from a fantasy perspective? #NFL #FantasyFootball

System-wise, Brown enters one of the best possible scenarios for him at this point. The Buccaneers, a pass-first offense, are led by a 43-year-old Tom Brady that is not only playing at an MVP level but getting an increased number of weapons on the offense involved in the process. With Mike Evans and Chris Godwin both spending time injured, Rob Gronkowski is the latest beneficiary of the Brady statement tour in 2020, scoring his first two touchdowns in back to back games.

Brady is third among NFL quarterbacks in completed passes, fourth in pass attempts, sixth in passing yards, second in passing touchdowns, and tenth in passer rating. In fact, his 15 touchdown passes are to nine different teammates and Brown will look to make it ten in Week 9 from a quarterback that he’s already spent some time working out with. Clearly, the upside exists for Brown to be an every-week start beginning Week 9, particularly if the injuries of Mike Evans continue to nag him and he has to take some time off. However, one must also realize the possible downside.

I asked Cam Jordan what he thought about facing Antonio Brown in Week Nine on @SNFonNBC. Said Jordan of Brown, "He's got to get to Week Nine."

For starters, Brown has to actually make it to Week 9 with no further disciplinary or health-related complications, a threshold which is no trivial task to surpass for him. Second, Brown has to find himself in the middle of a good floor of opportunity to feature in your starting lineup if you have already picked him up. If Evans, Godwin, and Gronkowski all take the field together, Brown’s upside still exists due to the touchdown ball but in a PPR format, the floor is low. Even if Brown is still the most talented pass-catcher on the team, there are no guarantees with Brady he’s getting the most targets. Just take a look at the blowout game in Miami for New England last year — 4 catches on 8 targets a week is not going to be tempting enough for PPR leagues without the touchdown score.

So here’s your game plan for now.

If you don’t own Brown in your league and he has already been scooped by someone else, don’t give up anything for him — just sit on the news and fill your WR needs with safer, less flashy options like I suggested for the Dez Bryant situation. If Brown is still available in your league, changes are the league isn’t all that deep — if you have a roster spot you can afford to mess around with, pick up Brown right away for the upside, especially if you need depth at wide receiver. You can even spend some FAAB if your league uses it, but again, please do not spend 50% of your cash on a guy who might not play a game. If you did scoop up Brown, you have a position of power but with great power comes great responsibility. Don’t fall for the upside to the extent that you trade away your other wide receivers; a.k.a. don’t let Brown be a must-start for you every week. Look out for the good matchups and keep an eye on the health of other Bucs pass-catchers. If the expected opportunity exists for Brown, he could be a start. For all those reasons, I’ll cop out of answering the poll and instead respond to an extended version by saying Brown will hover between the “Solid start” and “Decent but bench” options ROS and you have to take this week-by-week.

Finally, most importantly, whether you are an owner of Brown or one of the other main men in Tampa Bay (Evans, Godwin, Miller, Gronkowski), keep an eye on the news — conduct of Brown, health of Evans, notes by Arians on usage, the whole lot. And if you couldn’t give a rat’s behind about Antonio Brown’s return to the NFL — I respect that as well.