Christian McCaffrey is coming off one of the greatest seasons ever in terms of fantasy football production. The Carolina Panthers star running back amassed 1,387 rushing yards with 15 touchdowns, and 1,005 receiving yards with four touchdowns. Those 2,392 rushing and receiving yards bested the next closest player by over 600 yards.

McCaffrey had the best statistical season at running back since LaDainian Tomlinson was carving through defenses in 2006. His 142 targets ranked him eight in all of football, only trailing seven target heavy wide receivers. Combined with nearly 300 rush attempts, he is virtually impossible to catch at that pace.

However, things can change fast. Injuries, new competition, less opportunities, regression… you name it. McCaffrey, for now, has claimed his throne as fantasy football’s best overall player. Currently the consensus first overall pick in fantasy drafts, how does any player go about dethroning Christian McCaffrey?

First and foremost, any player who could surpass Christian McCaffrey has to receive ample opportunities on the ground and through the air. Looking back over the past three seasons, there have only been eight players to score over 300 fantasy points in half-point PPR leagues. Seven of those were running backs. Of those seven, six received greater than 21 opportunities per game. An opportunity meaning carries plus targets.

In order to be a candidate to best Christian McCaffrey, the player has to be a running back. That running back needs to be projected for at least 21 opportunities a game, with five or more targets per game being ideal. Otherwise, the efficiency would have to be off the charts to stand a chance against the volume-heavy majesty that is Christian McCaffrey.

While this may seem obvious, a player’s talent is every bit as important as his opportunity. It is one thing to receive ample opportunity, but it is another to be effective and efficient with those touches. In order to be consistently effective, a player needs to be good, and on a good team. For example, look at the below table of the top 20 running backs in terms of opportunities.

To the far right of the table is fantasy points per opportunity column. This is an excellent indicator of either a player’s talent or a team’s offensive talent. Use Le’Veon Bell as an example. He received enough opportunities to be in consideration as a player to dethrone Christian McCaffrey, but his points per opportunity were by far the worst of the group. Brutal. While Bell’s talent shouldn’t be in question, the offense he plays in should be. The Jets ranked second to last in rush yards per game and 28th in pass yards per game. This inefficiency automatically eliminates any possibility of a running back on a bad team taking the top spot in fantasy football.

Here are the select few that stand a chance of dethroning Christian McCaffrey. This group of running backs shows the opportunity and talent combination that is needed to become fantasy football’s most valuable player.

If I had to pick one running back based purely on talent, Saquon Barkley would be my guy. Standing at 6-feet tall, and weighing 230-pounds, Barkley is scary explosive and agile for big back. In two seasons with the Giants, Barkley has averaged 4.8 yards per carrying, and 8.1 yards per reception on a poor offense.

While those numbers are solid across the board, Barkley suffered a high-ankle sprain in Week 3 that significantly decreased his ratios. 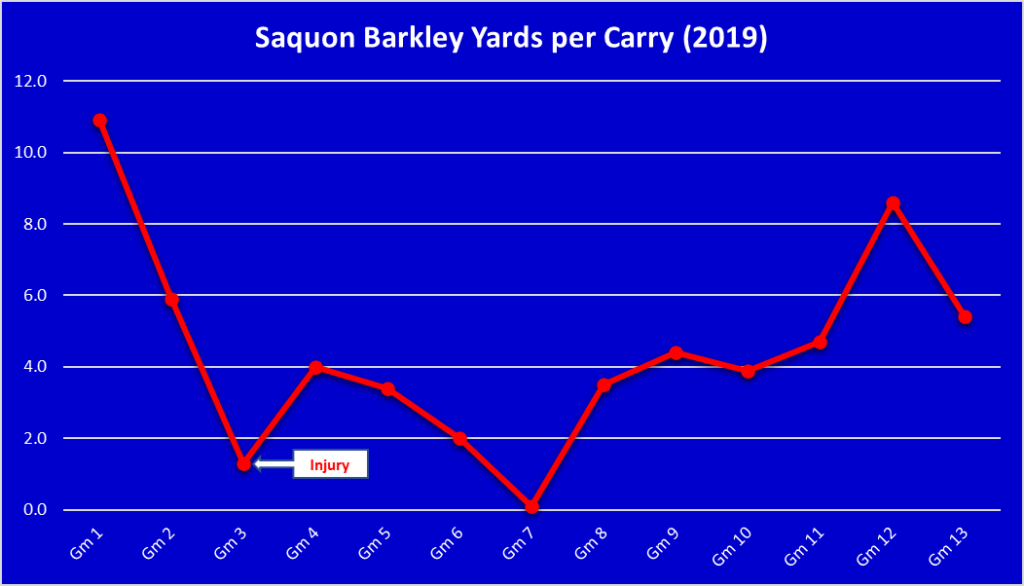 These types of injuries take a minimum of six weeks to heal, but more commonly it should take two or three months to fully heal. Barkley came back in four weeks. There is no way he was even 80-percent healthy at that point in time. It showed beyond his yards per carry as well, as Barkley averaged a pedestrian 10.2 fantasy points per game between Week 7 and Week 14. In the final three weeks of the season, Saquon turned back into the fantasy stud that we have all grown accustomed to. 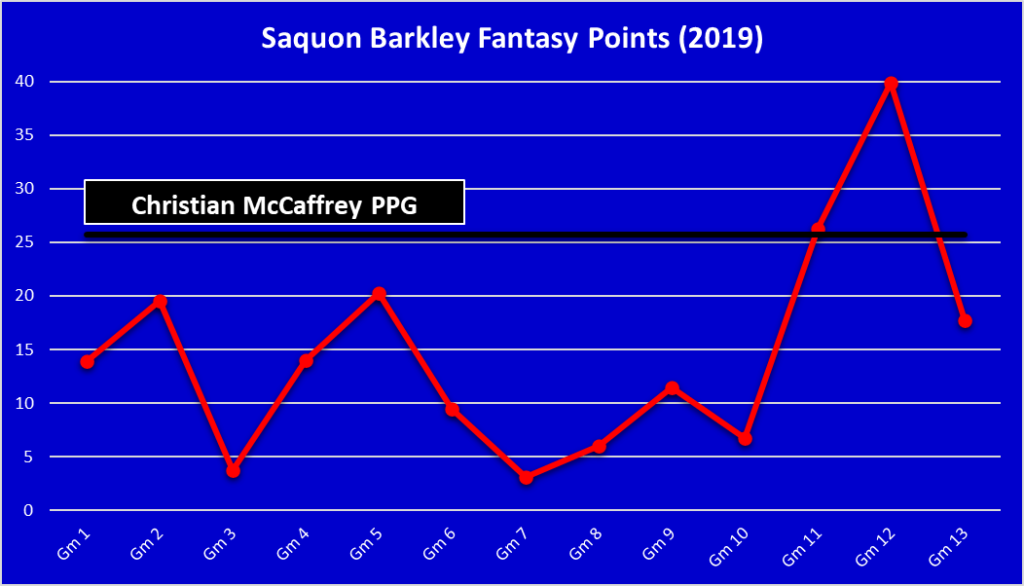 When Barkley is healthy and receiving the workload he deserves, he has the upside to usurp McCaffrey. As a matter of fact, Barkley outscored McCaffrey in 2018, his rookie season. Barkley carried the ball 261 times for 1,307 yards and caught 91 passes for 721 yards. He totaled 338.3 fantasy points in one-half PPR leagues that season, which still put him well behind McCaffrey’s 411.2 points in 2019. In order for Barkley to get to the next level, he will likely need to best his 2018 totals. For a player going into his third season, on an offense that should be improved, that is not out of the realm of possibilities.

Ezekiel Elliot is the second most consistent running back in the league behind Christian McCaffrey. He is the benefactor of being super talented, playing on a great offense, and receiving heavy touches. There is very little to dislike about the 25-year-old fantasy stud.

Elliot only trailed Derrick Henry in total rush attempts in the 2019 season, where he eclipsed 300 carries for the third time in four NFL seasons. Only two other running backs total have received over 300 carries in a season over that time span, Elliot has done it three times.

He was also top 10 in targets in 2019, receiving 71 total targets, ranking him second in total opportunities behind McCaffrey (as can be seen in the table in the first section). The key for Elliot to dethroning Christian McCaffrey will be receiving the necessary amount of targets. 71 targets is good, but it requires a running back to be highly efficient running the ball if they are to be the best player in fantasy. The good news for Elliot is the fact his target volume increased as the season went on in 2019. 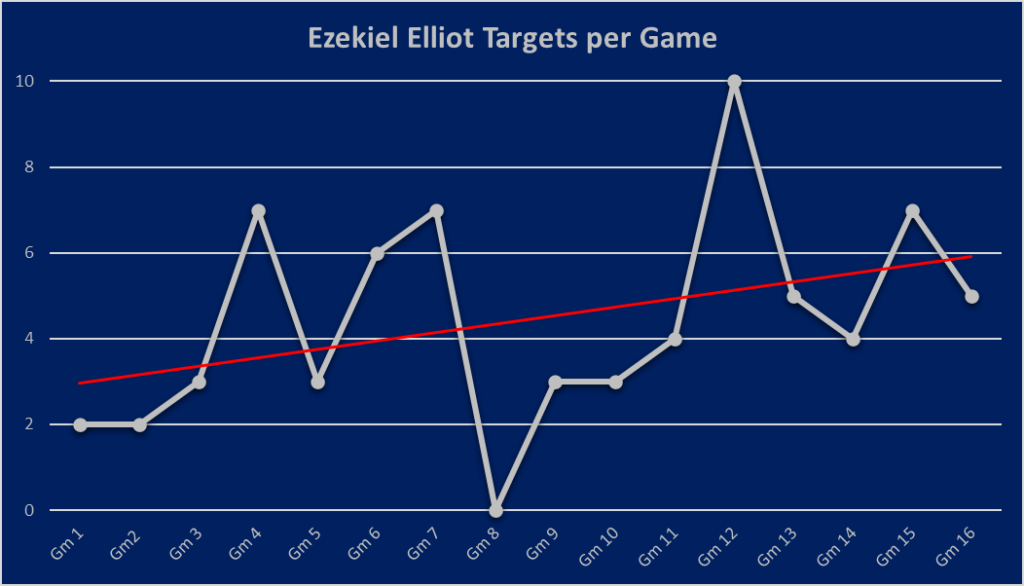 Although the Cowboys have three great wide receivers who will take away targets from Elliot, he should still be heavily targeted in 2020. If Elliot can approach his 2018 target total, where he received 95 targets, he will arguably have the highest chance of surpassing McCaffrey.

Dalvin Cook is one of the most talented running backs in the NFL. He is arguably every bit as talented as Christian McCaffrey, but there are a few things that have prevented Cook from supplanting McCaffrey. The first being injuries. In order to score fantasy points, you have to be on the field. In three seasons, Cook has missed a total of 19 games due to various injuries. The positive news, he played in 14 of 16 possible games in 2019, so hopefully, he is trending in the right direction.

A second issue is the fact that he has not received the necessary targets to be considered as the top overall player in fantasy. Last season, he saw 63 targets, which was a career-high. That is roughly thirty targets lower than we need to see from a running back hoping to overtake McCaffrey.

With that said, opportunity has opened up for Cook. The Vikings traded away star wide receiver Stefon Diggs in the off-season. That is 94 vacated targets from the 2019 season. They did draft a wide receiver in the 1st round of the 2020 NFL Draft, but do not expect all targets to go to him, as he is reportedly running with the second team in practice. Cook should see an increase in targets, the question is how much of an increase will he see?

In games where Cook saw 21 opportunities or more, he averaged 23.4 fantasy points a game, not far behind McCaffrey’s 25.4 points per game. Factor in that Cook should see more targets in 2020, and he is as strong a candidate as any to lead his league mates in scoring.

What if I told you the most elusive back in the NFL was on a vastly improved offense, with a new quarterback that loves to target his running back? That running back has been rumored to take on a bell-cow role heading into the 2020 season, where his coaching staff has come out and said “we need to get him the ball more”. That running back is Joe Mixon.

According to www.playerprofiler.com, Mixon had the most evaded tackles in the NFL last year. 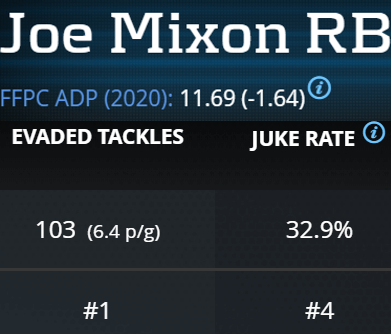 That was on an arguably a bottom-five offense in the league. In 2020, the Bengals get back star wide receiver A.J. Green to help spread the defense out. They implement number one overall pick Joe Burrow at quarterback, who is coming off one of the greatest seasons we have ever seen in college football. Former 2019 first-round pick, offensive tackle Jonah Williams, returns as well after suffering a season-ending injury before the season started.

Sum all of that up, and you have a potential heavy volume running back in an up-and-coming offense. It is hard to criticize Mixon for past statistics, as he has had to overcome about as many obstacles a bad team could throw at him. If he can get increased targets, and continue the pace he ended last season at, Mixon is talented enough to surpass McCaffrey. 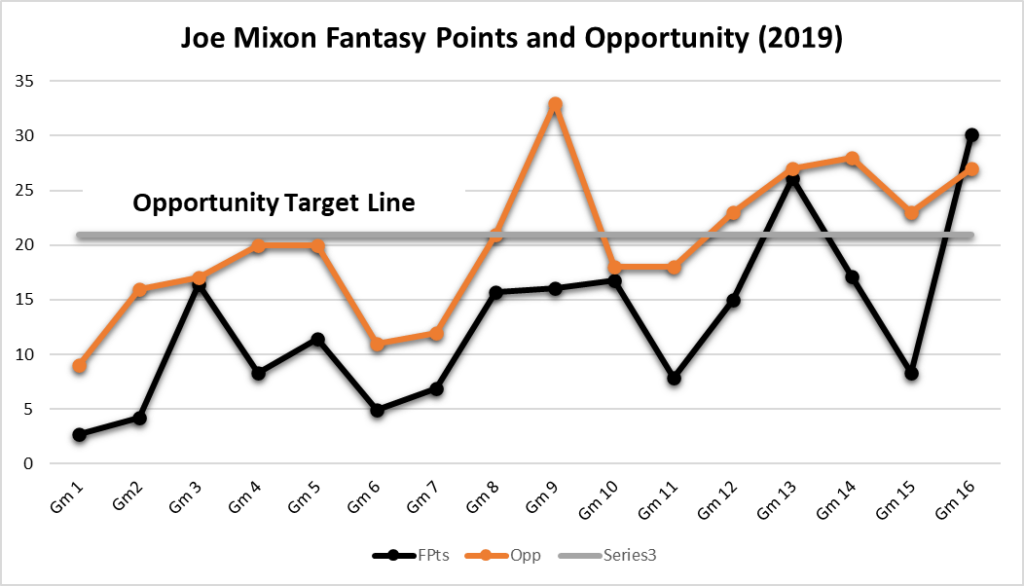 There are several players missing that will likely have certain readers up in flames. Just because a player isn’t on this list doesn’t mean they aren’t great players, it just means I don’t see a path for them being the number one overall player currently.

Alvin Kamara will be the most noticeable. He is an elite talent at the running back position, and if he received the amount of work these other backs will see, he would be in this discussion. However, he will not receive enough volume to be considered, nor do I believe he is capable of handling that type of volume.

Miles Sanders is a popular pick, and for good reason. He is an excellent talent on a good offense. Sanders has little competition for touches, however, I am not sure he will receive the necessary opportunities. He is capable, but I do not believe the Eagles will do it. I love him as a player, and he’s an excellent pick late first-round pick . If Sanders can get to the pace he ended 2019 at, he may be in discussion with the previous four highlighted backs. 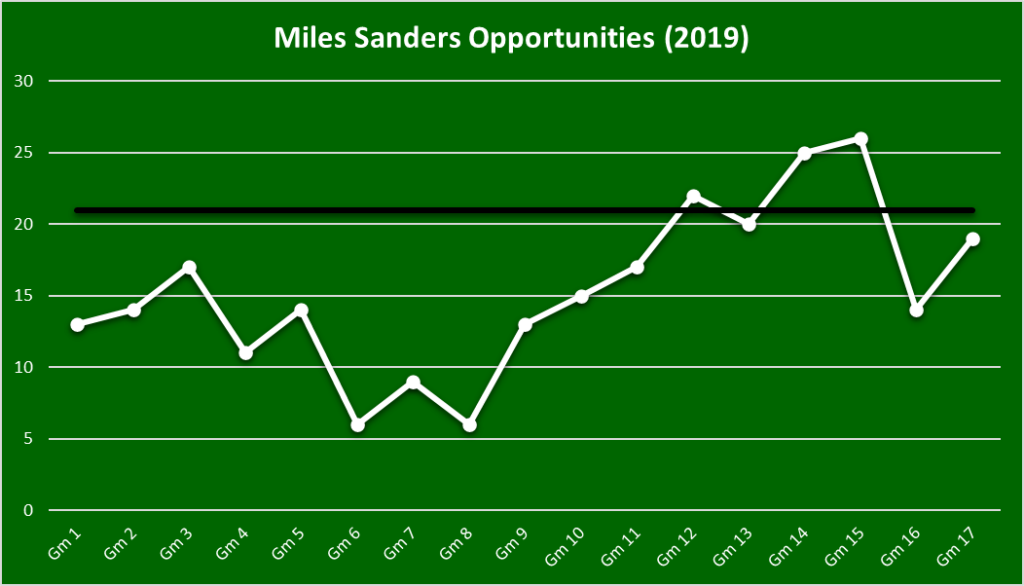 Kenyan Drake looks to be a bell cow. However, he has never done it over an entire season. The other issue is the Cardinals are going to spread the ball around through the air to Larry Fitzgerald, Christian Kirk, and new acquisition DeAndre Hopkins.

Finally, Derrick Henry, Josh Jacobs, Nick Chubb, and Aaron Jones all have the talent to be the games best back. Henry, Jacobs, and Chubb will not see the necessary targets to compete with McCaffrey. Aaron Jones is capable of handling a full workload. However, the Packers have said that they will not have a bell-cow back. They proved that after drafting a running back in the second round.

If you like this, you’ll also want to check out Corbin Young’s Top Breakout Backs for 2020!