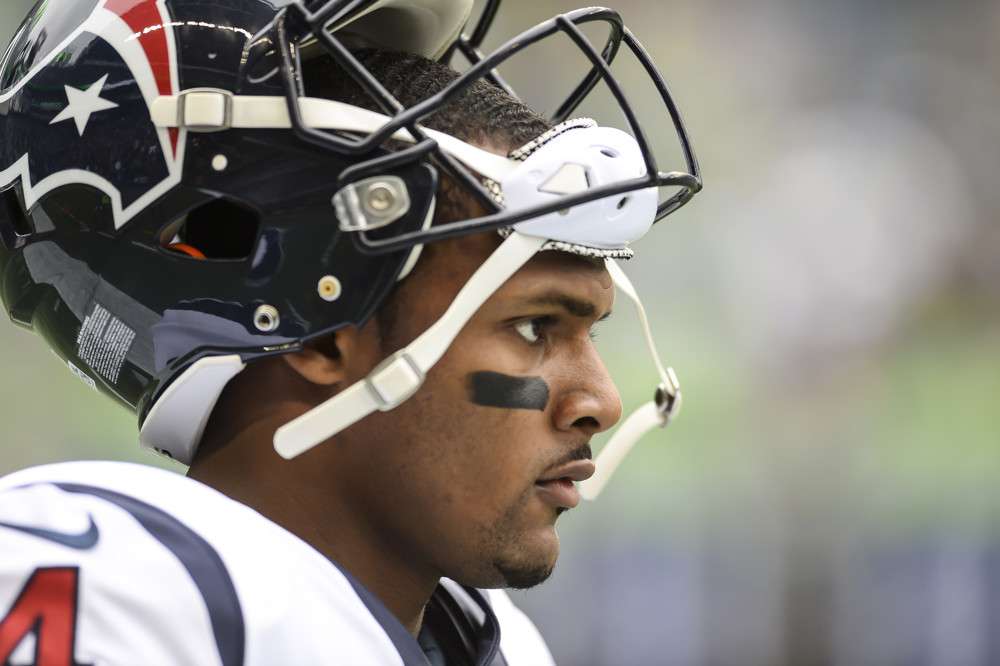 Before we go any further, this article will focus on Deshaun Watson in terms of dynasty value and fantasy production going forward. Its purpose is not to determine whether or not he committed the acts alleged by the plaintiffs in the pending civil suit or to discuss the morality of said acts.

Instead, this article serves to fully explain the legal situation and then provide actionable advice on whether to buy or sell Watson in dynasty trades given what we know right now. Specifically, we’ll discuss whether it’s prudent to acquire Watson in dynasty at all, and if so, what price level seems palatable considering the associated risk and reward.

Most know by now that Deshaun Watson is facing a pending legal battle over allegations of sexual assault, but many aren’t aware of or fully comprehend the details that have been released thus far. At the time of this writing, 16 civil suits in total have been filed in concert, all represented by one attorney, Tony Buzbee. The plaintiffs allege that Watson “assaulted and harassed” them by “exposing himself” or “touching with his penis”. In response, Watson’s attorney, Rusty Hardin, has categorically denied that Watson has ever “forced a woman to commit a sexual act” and has surmised that one of the plaintiffs had previously attempted to blackmail Watson for $30,000 about what was considered a consensual engagement.

Let’s break this down. First and foremost, it’s important to note that these are all civil suits, not criminal. In a criminal case, a jury must find evidence of guilt beyond a reasonable doubt, essentially coming to an absolute certain conclusion of guilt. In a civil case such as this, the burden of proof is far lesser, only requiring a preponderance of the evidence, or a greater than 50 percent chance that the defendant is at fault. As such, the risk of Watson being found at fault is higher in a civil case, but on the other hand, there is no risk of jail time.

And while the plaintiffs’ attorney, Buzbee, has said that he will request a grand jury hearing to determine whether criminal charges are appropriate, the odds of a criminal indictment are low. Generally, criminal cases preempt civil cases because many civil suits lack sufficient evidence to secure a grand jury indictment. It’s possible for evidence to come to light during the course of a civil suit that strengthens the case for a criminal charges, but it’s rare.

Second, due to Watson’s defense attorney’s wording in his recent statement, it’s possible that Watson did expose himself but never “forced” any action thereafter. Again, while this may be an immoral act and possibly even illegal, the consequences and weight of such actions are completely different in legal terms. There’s definite risk that Deshaun Watson could lose the civil case and be forced to pay a sum of money to the plaintiffs. And in that event, it’s probable that the NFL would also issue a suspension. So what consequences could Watson potentially expect?

The league coordinates and completes its own investigations in these cases separate from that of any criminal or civil case. Following its investigation, the NFL then determines whether a player has violated the personal conduct policy, which currently states the following:

“It is not enough simply to avoid being found guilty of a crime. We are all held to a higher standard and must conduct ourselves in a way that is responsible, promotes the values of the NFL, and is lawful.”

But looking back, the only consistent part about the NFL’s handling of players’ off-field incidents has been their inconsistency in whether or how they doles out punishments. The chart below shows the major off-field incidents involving NFL players in recent history and how the league has handled punishment for those incidents. 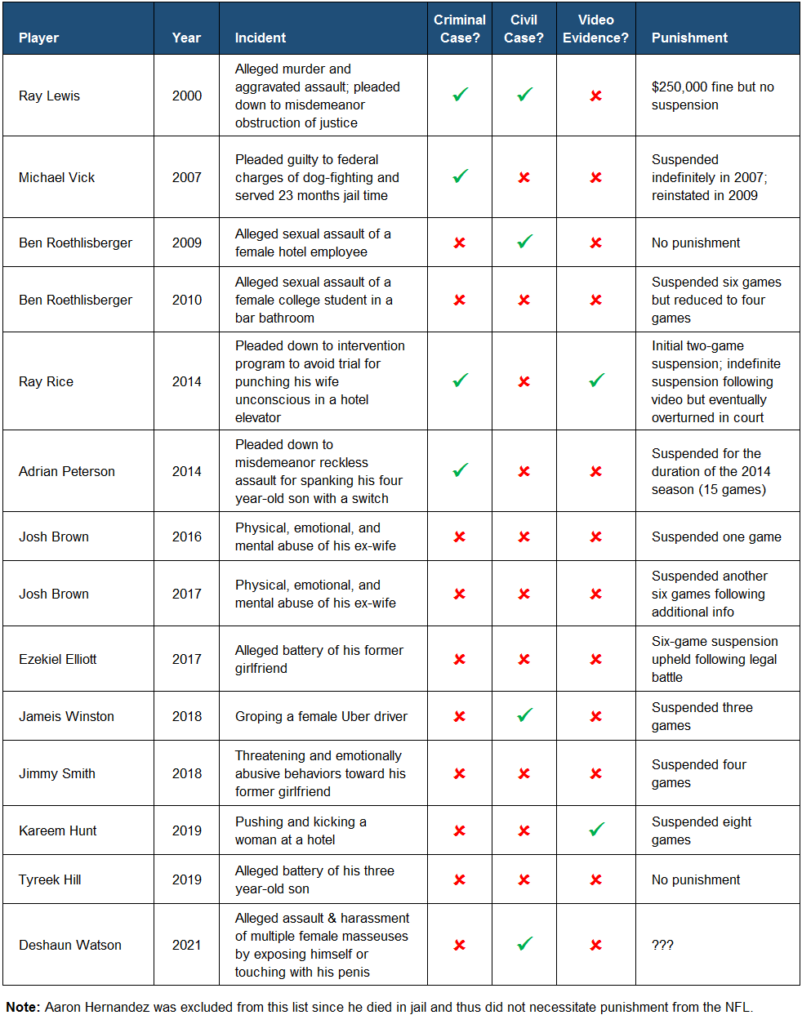 It would appear that the NFL is most concerned about public relations and determines punishment for each case differently depending on their own analysis of the situation. In recent cases where the NFL player pleaded guilty or no contest to criminal charges or where there was video of the incident, the league was justifiably harsh with their penalties with public opinion clearly in their favor and no legal repercussions, handing out an indefinite suspension to Ray Rice and eight games to Kareem Hunt.

Following the Rice case, during which the league faced widespread backlash for its initial slap on the wrist of a two-game suspension, the NFL began punishing all transgressions more harshly. But in the league’s efforts to demonstrate that it was taking these incidents more seriously, it’s possible that the pendulum had swung too far from not enough punishment to almost mandatory punishment regardless of evidence. This resulted with the case of Ezekiel Elliott in 2017, where the league issued a six-game suspension for domestic violence despite little reliable evidence.

Perhaps learning from the drawn-out legal battle that benefited no one after Elliott and the NFLPA repeatedly appealed his case, the pendulum then swung back. The NFL chose not to suspend Tyreek Hill at all in 2019 after the district attorney cited lack of evidence in pursuing a criminal case. So where does the league now stand with Watson’s legal issues?

In my personal, non-legal expert opinion, Watson’s current situation most similarly mirrors that of Ben Roethlisberger in 2009. Roethlisberger ultimately settled out of court without acknowledging any wrongdoing and was not suspended. What Deshaun Watson chooses to do next will impact the NFL’s actions. If he proceeds with the civil case, the NFL will likely wait to levy any punishment until after its conclusion, as it has in the past. This means that Watson may not face any suspension in 2021 regardless of the outcome of his case.

If the civil suit is eventually dismissed, he’s also unlikely to see any repercussions from the league. But if Watson is forced to pay damages at the conclusion of this case, the NFL will likely follow suit and issue a suspension of six games at the least and possibly even a full season. The optimal solution for Watson at this point may be to settle out of court. In that event, he would pay a paltry sum to the plaintiffs compared to what he would pay if he loses the case, and settlements often times include nondisclosure agreements and clauses that prevent plaintiffs from ever pursuing further litigation.

While a settlement might not clear Watson’s name as he wishes, it could benefit his career to do so in an effort to possibly clear the way for no suspension and another NFL team to trade for him. Given the high-profile nature surrounding the civil suits filed against Watson as well as the high number of accusers, public opinion will play a factor in whether the NFL chooses to suspend him. The league could choose to suspend him even if he settles the suit or does not have to pay damages at its conclusion. However, in that event, Watson could then cost the NFL ample time and money in a protracted legal battle appealing the suspension like Elliott did in 2017.

Considering all the options on the table for both Deshaun Watson and the NFL, I believe that the best-case scenario could still be no suspension if he settles out of court. Of course, under the purview of NFL commissioner Roger Goodell, there’s still a wide range of outcomes even if Watson settles. But seeing as there’s a lack of precedent of civil cases without video evidence leading to prolonged suspensions, the absolute worst-case scenario based on the details we know right now would be a one-year suspension for Watson.

But let’s not forget the risk of Watson sitting out games even if he avoids a suspension. After all this, Houston could still stubbornly refuse to trade him, forcing Watson to hold out before the Texans eventually come to terms. Trade talks have halted significantly in light of Watson’s legal troubles per Benjamin Allbright’s recent tweet:

“For us it’s a football decision. We don’t know about guilt, but we know this won’t be wrapped by the draft…”

Even so, Watson’s talent is too enticing for NFL teams to stay away for too long once his legal issues get wrapped up. Houston trading Watson is now seemingly a matter of when, not if. And despite reservations about the initial public relations backlash of trading for Watson, NFL GMs understand that regardless of right or wrong, most off-field concerns can eventually be washed away by wins and Lombardi trophies.

What to do with Deshaun Watson in Dynasty

There’s no single correct answer. Some dynasty GMs prefer to avoid any player with a checkered history for personal moral reasons, and that’s fine. For others who are simply looking to add value to their fantasy rosters though, I do believe that Watson is a buy-low right now in dynasty trades.

“The time to buy is when there’s blood in the streets.”

The above quote is a rather famous saying accredited to Baron Rothschild in the 18th century, who made a fortune buying on the stock exchange following Napoleon’s defeat at the battle of Waterloo. Simply translated, it means that the worse things seem, the more opportunity there is for profit, and we’re nearing peak panic levels over Watson’s pending court case.

Many dynasty GMs may be looking to sell, and that could make sense for contending teams given the risk of Watson missing at least some or all of the 2021 season. However, even for a contender, I’d eschew panic-selling at grossly discounted prices. And for rebuilding teams, I would highly recommend buying at a deep or even slight discount. Here are some recent dynasty trades involving Deshaun Watson in superflex formats per DLF’s trade finder tool: 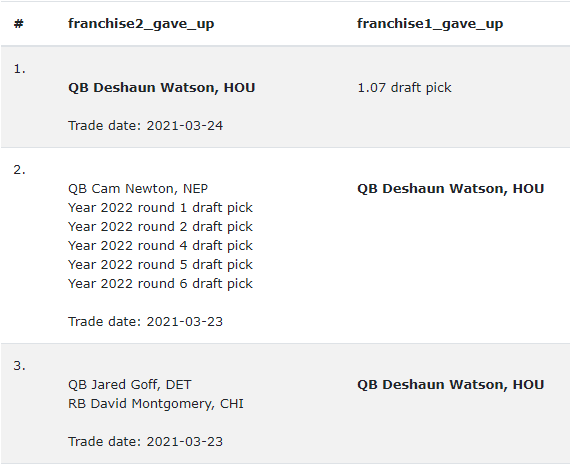 These prices are all incredibly cheap for Watson if you believe that he’ll miss one season or less, whether due to suspension or holdout. At these valuations, the risk on Watson is more than palatable considering the reward of another five or more years of top-end fantasy QB1 production.

In superflex formats, the only rookie picks I would not currently be willing to pay for Deshaun Watson would be the 1.01 and the 1.02. Trevor Lawrence carries similar upside and slightly less risk, and whichever quarterback San Francisco drafts at no. 3 overall will likely carry more trade value than Watson does as it currently stands. However, I would be willing to pay the 1.03 or less in superflex given the bust rates for even highly-graded first-round rookie picks. And in 1QB formats, it would depend on how quarterbacks are generally valued from league to league, but I would be willing to pay an early second-round rookie pick or less.