Why I Can’t Get Excited About Derrick Henry 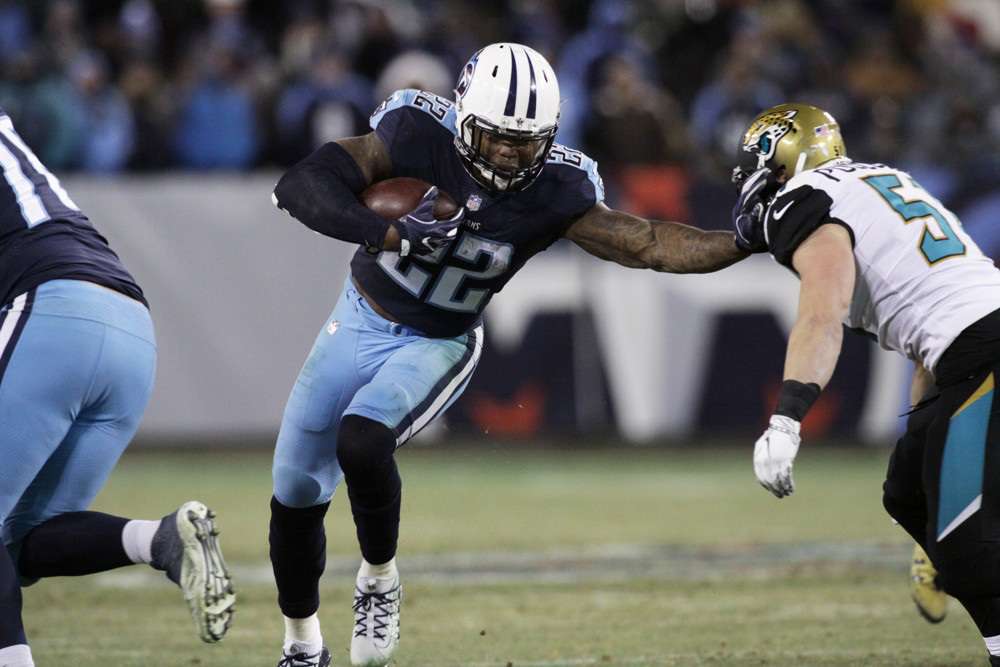 The Downside of Derrick Henry

Henry finished 2018 with just 18 targets or tied for the 69th most among running back. Want to know the worst part? That was a career high. He also hauled in career-high 15 receptions, which ranked tied for 60th among running backs. He’s never topped 137 receiving yards and has one career receiving touchdown.

If you remember last season, Henry went on a pretty historic run in the final month of that season. Over that stretch, he rushed for 585 yards in four games, which put him on a ridiculous 2,340 yard pace over the course of 16 games. But he had just three receptions for 21 yards in that stretch. Additionally, even with that monster stretch, it did not lead to him being used more in the passing game.

There has been speculation that the Titans will attempt to throw the ball to Henry more, but nothing in their actions really shows a commitment to that. Henry actually played a part in the passing game in the playoffs for the 2017 Titans, hauling in five of six targets for 56 yards, and the Titans responded by going out and signing Lewis. Lewis is not only the more experienced pass-catcher, but he is the more efficient one too. In 2018, Henry had a 83.3 percent catch rate. That number drops to 78 percent in his career. He also averaged 6.6 yards per reception in 2018. Lewis, on the other hand, had an 88.1 percent catch rate in 2018 and his career rate is 82.1 percent. He averaged 6.8 yards per reception in 2018. He tops Henry across the board.

In an ideal world, the Titans would want to throw the ball more to Henry, as that helps their offense be a little less predictable. Currently, when Henry is out there you can guess that they are likely going to run the ball, but when Lewis is out there it becomes harder to predict. That is why he out-snapped Henry for the vast majority of 2018.

That is another reason I find it hard to invest an early round pick in Derrick Henry. Sure, it is nice to think he can be used more in the passing game and perhaps it happens. However, if it doesn’t it could quickly lead to his season resembling his 2018 one, where he has a few big games, but a lot more disappointing ones.

If you remember, through Week 13 Henry was RB39 in PPR leagues and 34th in non-PPR. Just a month later he finished as the RB16 in PPR and 13th in non-PPR. Sure, if you had Henry in that final month it was a lot of fun and you may have even won a championship. But, there is also a very high chance that you missed the playoffs, or that you had him on the bench for his career-game in Week 14 when he rushed for 238 yards and four touchdowns… and also had zero targets. Prior to that breakout game, his weekly high in rushing yards was 57. Over the first 12 games, his 16-game pace was: 171 carries, 632 yards, seven touchdowns with 20 targets, 16 receptions, and 104 receiving yards.

In theory, yes, you would think that the Titans should use Derrick Henry more, especially after that final month. But unless Henry takes huge strides in the passing game and proves to be a more dependable option than Lewis, his production will be volatile.

If Lewis is still used as the primary passing-down back, then Henry is also in jeopardy of just getting phased out in games due to game script. If the Titans start to trail, they will turn to Lewis, as he can both be an effective runner and is the better pass catcher of the two. There were five games last year where Henry failed to record double-digit carries. The Titans lost three of those games. But before you say they lost because Henry didn’t run, the actual reason is Henry didn’t run because the Titans were trailing.

Henry should see enough work to produce as an RB2 this season. But the fact that he is more game-script dependent than backs who go around him, was very volatile week-to-week last year, and the fact that Lewis is the better pass catcher and isn’t going anywhere, it makes investing in Henry in the third round simply too high of a price for my blood, unless it is a non-PPR draft. I do not love him even in non-PPR, but it becomes a lot easier to take that shot in the format.

I do not plan on taking Derrick Henry in a ton of fantasy football drafts this summer and I would recommend you stay away as well, especially given the increased bust rate of backs after the elite options.

If you want to make a case for Henry, hit me up on Twitter, @MichaelFFlorio.