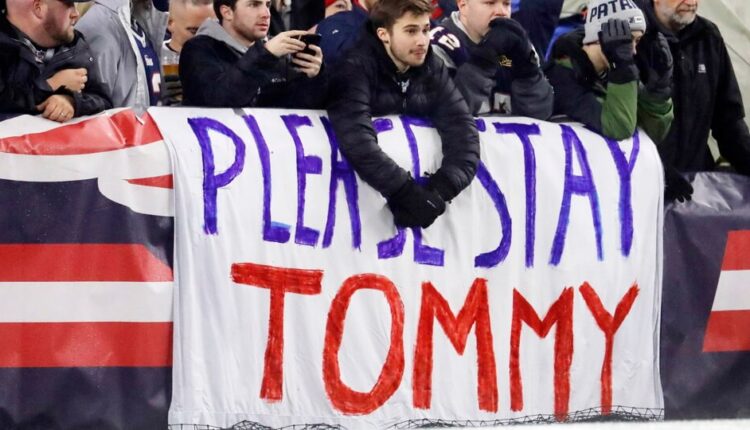 New England has had ownership of the AFC East for over two decades but this could finally be the end of it. Buffalo looks like the team to beat in this division and it makes the AFC East one of the most fascinating divisions in football. With that in mind, let’s kick things off with the Pats!

Tom Brady has been the best quarterback in the AFC East for decad…. Wait, Brady is gone? Yes, this is the first time New England won’t have Brady behind center in a very long time and it makes this one of the most intriguing positions in the league. They simply didn’t want to pay TB12 the crazy sum that Tampa did, so they chose to bring back veteran Brian Hoyer. Hoyer and Jarrett Stidman will battle for the starting quarterback job and one has to believe that the Patriots are looking at guys like Andy Dalton or Cam Newton while surely targeting someone in the draft. This is definitely something to keep an eye on and monitor over the coming weeks.

Sony Michel, James White, and Rex Burkhead have formed one of the most frustrating RB committees in the NFL for fantasy owners and it doesn’t appear they’re going to stray away from that with everyone under contract. They also got Damien Harris last season too, so, look for them to remain quiet at this position.

A trade for Mohamed Sanu last season secured a WR tandem of Julian Edelman and Sanu. That’s plenty good and they surrounded them with guys like Damiere Byrd, N’Keal Harry and Jokobi Myers. Harry is the guy to look out for because he has the talent to be one of the best wide receivers in the game.

The Rob Gronkowski and Aaron Hernandez days are a thing of the past and it has the Pats riding Matt LaCosse and Ryan Izzo. Yeah, I don’t know who those guys are either and one has to believe that Belichick is looking for his next tight end. Don’t be surprised to see them pick one in the draft and maybe putting him behind a trustworthy veteran free agent.

Sam Darnold was the third overall pick in the 2018 draft and he’s definitely shown flashes of brilliance in his first two seasons. He’s the franchise quarterback for the time being and will get as long of a leash as he can handle. Mike White is the only other play-caller on the roster, so, look for them to add a veteran back-up or possibly swing someone late in the draft. If Darnold can take that next step, the Jets have plenty of talent to compete in the AFC East.

Le’Veon Bell is surely the bell-cow back for the Jets but there’s some talk about him being traded. If they do move him, this backfield will consist of guys like Josh Adams, Trent Cannon Kenneth Dixon, and Jalin Moore. That many players under contract makes me believe that they won’t do anything else but that’s definitely dependent on whether they keep Bell or not.

With Robby Anderson signing elsewhere, New York decided to replace him with Breshad Perriman. He’ll fit right into that Anderson role, next to Jamison Crowder and Quincy Enunwa. That’s a solid WR corp but they could address this position at the draft to find a standout guy to complement Darnold for the future.

Chris Herndon always seems to have the apple of many fantasy owners eye and they’ll surely be hyping him up again this offseason. Ryan Griffin also remains relevant and that makes this position pretty deep for the Jets.

Ryan Fitzpatrick was awesome last season and he’s definitely secured the starting job going into the season. Josh Rosen is right there though and he’ll surely be ready to step in if FitzMagic struggles. Miami is also in the market for a franchise quarterback and they could land a guy like Tua Tagovailoa with the fifth pick in the draft. They made a ton of signings in this free agency period too and this is one of the last things they need to address to compete in the AFC East.

Kenyan Drake thrived once he left the Dolphins and they chose to go with a Mark Walton-Kalen Ballage-Patrick Laird combo. That obviously was a disaster and that’s why they added Jordan Howard in the offseason. He should be the main guy there and they could add someone for the future later in the draft with Howard aging rapidly.

DeVante Parker finally had his breakout campaign last season and he’s definitely the key to this offense. There are literally 10 other WRs under contract on this roster, so, it appears they have some sorting out to do here. Look for Albert Wilson, Jakeem Grant, Preston Williams and Allen Hurns to all make the team.

Mike Gesecki had a minor breakout last season and should remain the go-to TE this season. Durham Smythe was their fourth-round pick in 2018 and he should step in as the second tight end. They could add someone but tight end has never been a big deal for the Dolphins.

Josh Allen has his flaws but he’s going to be the Bills quarterback for the foreseeable future. He has the talent to carry this team to an AFC East crown but he needs to take another step forward this season. Matt Barkley remains his back-up.

Devin Singletary flashed moments of brilliance last season in his rookie campaign. T.J. Yeldon is there to back him up too but there’s some discussion of them adding a veteran in free agency. If they don’t, look for Singeltary to be the bell-cow back and a breakout candidate.

Buffalo landed one of the best available WRs in the league, acquiring Stefon Diggs from Minnesota. He’s probably the best wide receiver in Buffalo since Lee Evans, making this a huge move for a developing quarterback like Allen. John Brown will slide over to the two-spot while Cole Beasley will remain in the slot. Andre Roberts also remains under contract and they surely won’t do anything more at that position.

Dawson Knox and Tyler Kroft isn’t the sexiest TE duo in the NFL but it’s plenty good with the addition of Diggs. They could make a move here but their offensive line might be their biggest focus in the upcoming draft.

How To Evaluate Hitters for Fantasy Baseball