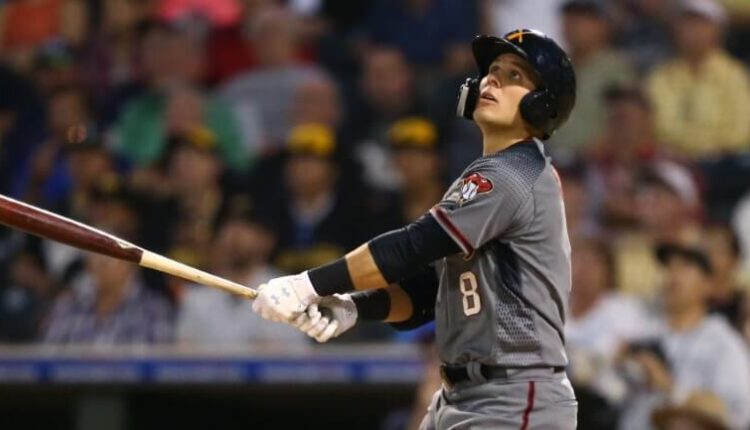 Did you read the title of this article and laugh? I am sure that some of you did, or at least said it is not possible. How could Daulton Varsho possibly be a top-five catcher in 2021? While there could be various outcomes, Varsho has all the tools to be a top catcher for Fantasy Baseball.

Given the landscape of the catcher position for Fantasy Baseball, Daulton Varsho certainly has the upside to be a top-five catcher in 2021. There is no questioning his ability to perform given what we saw in the Minors. The question is, will he get the plate appearances to excel? Early drafters seem bullish on him, as Varsho is the 11th catcher off the board at pick 210 in early NFBC drafts. Let’s look into Daulton Varsho’s profile and see why he can be a top-five catcher in 2021.

During three seasons at the University of Wisconsin-Milwaukee, Varsho slashed .335/.428/.572 in 700 plate appearances. Additionally, he hit 24 home runs and stole 32 bases in 162 total games. This led the Arizona Diamondbacks to select Varsho in the second round of the 2017 MLB Draft.

Varsho then burst onto the scene in his short season debut with the Diamondbacks by hitting seven home runs and stealing seven bases to go with a .311 batting average in 212 plate appearances. Even a strong 2018 season was not enough for most prospect evaluators to give him the respect he deserved.

2019 was the big breakout year where Daulton Varsho finally showed that he could be a high-end player. Playing 108 games in double-A, Varsho slashed .301/.378/.520 with 18 home runs and 21 stolen bases. Many began to take notice in 2019, and Varsho began to move up prospect rankings around the industry.

In addition to a strong bat, Varsho can play behind the plate, third base, and outfield. Playing catcher obviously sets him apart for Fantasy because he brings a strong hit tool and speed that most catchers do not. There are questions of whether he will stick behind the plate long term, but I hope he plays enough catcher to retain that position eligibility for several more years.

What does Daulton Varsho bring to the table for Fantasy? Let’s take a look at his tools.

Daulton Varsho has consistently shown an above-average to plus hit tool for several years now. From the left side of the plate, he has a good eye for pitches and can hit the ball to all parts of the field very well. He rarely strikeouts, despite what his small MLB sample in 2020 may say. Throughout his professional career, Varsho has always shown the ability to walk at a high rate while striking out a low clip.

Varsho has an aggressive approach at the plate but, at the same time, is very discerning on pitches. He often works deep into counts and can foul off tough pitches, which helps him prolong counts. When Varsho pulls the ball, he can really display his power, but he also knows when he needs to hit a pitch the other way. Check out the video below of Varsho using the outer half of the plate to beat the shift and then show off his wheels by legging out a double.

Daulton Varsho may not be the most powerful player, but he is more than capable of turning on a pitch and hitting it extremely hard. He currently has average power and should be a hitter capable of hitting 20-25 home runs over a full season. While it may seem light, it is important to remember that just eight catchers hit 20 or more home runs in 2019. As long as he retains catcher eligibility, his power will play extremely well. Check him out below as he turns on a pitch and sends it out of the park with a 109 mph exit velocity.

Daulton Varsho is extremely agile and athletic, which shows in his speed. Between 2018 and 2019, in 191 games, Varsho stole 40 bases in 48 attempts. This is such a rarity for catchers, so he will be a huge asset in roto leagues if he can keep eligibility there. For reference, between 2018 and 2019, J.T. Realmuto was the stolen base leader among catchers at 12. He did that over 270 games. Varsho’s stolen base potential will be the reason he can rank among the elite catchers for Fantasy Baseball. He does something that none of them can; steal bases at a high rate.

Daulton Varsho has the 14th fastest home to first base time on Baseball Savant’s sprint speed leaderboard. His sprint speed was also clocked at 28.3 feet-per-second, which is good for 86th percentile among 454 players. Varsho’s sprint speed is right in line with elite stolen base threats such as Whit Merrifield, Starling Marte, and Mookie Betts. The numbers show he is more than capable of stealing 20 bases over a full season.

Daulton Varsho made his much anticipated MLB debut in the shortened 2020 season but left much to be desired. He posted a slash line of .188/.287/.366 with three home runs and three steals in 115 plate appearances. The positive takeaways were his stolen bases and walk rate of 10.4 percent. The bad news was that Varsho posted a strikeout rate of 28.7 percent, which was 12 percent higher than his career 16.2 percent MILB strikeout rate. 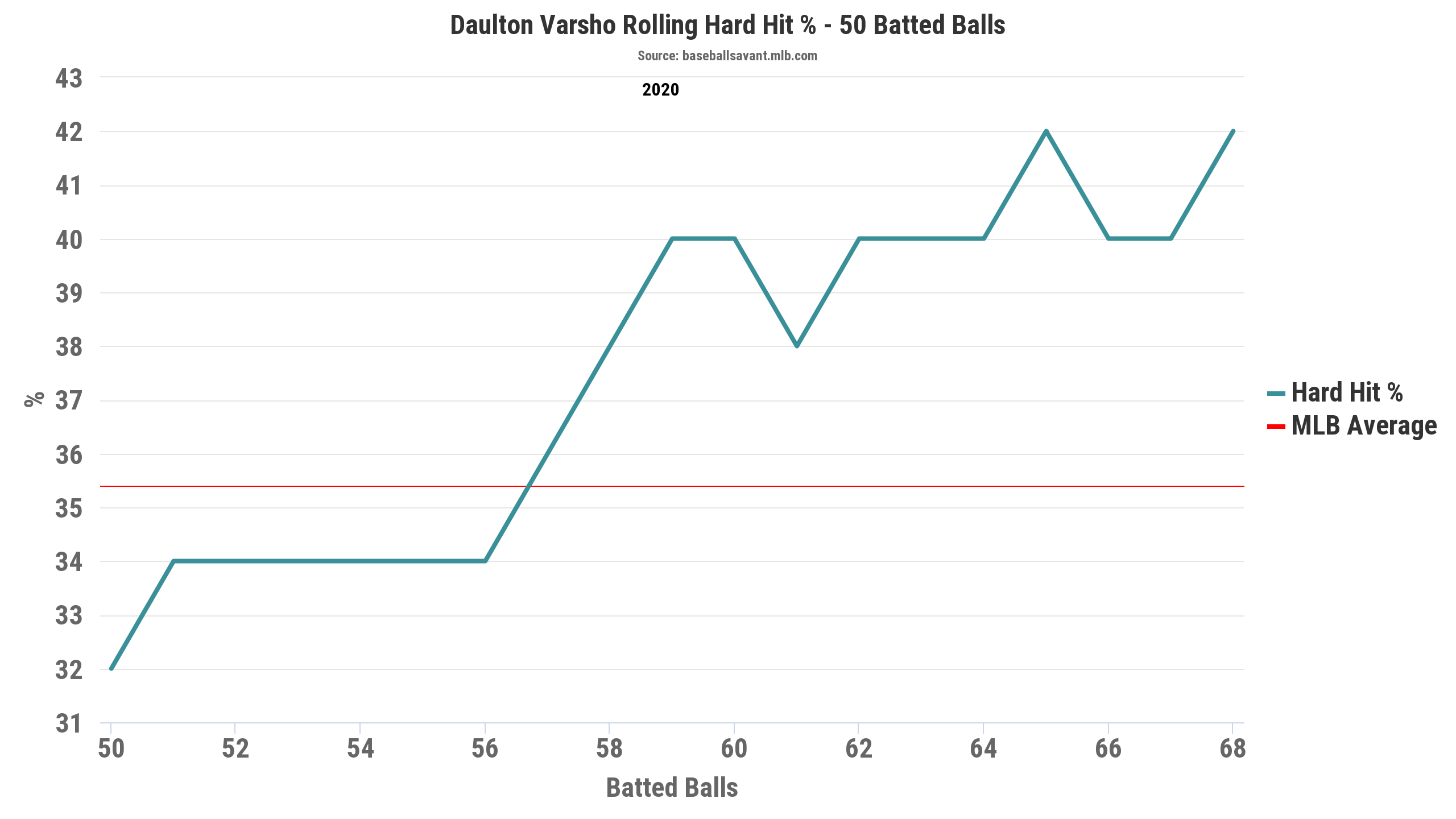 Varsho did improve throughout the season, though. His strikeout rate trended downward, while his walk rate, hard-hit rate, and batting average all trended up as the season wore on. From September 4 through the end of the season, Varsho hit all three of his home runs and posted a .822 OPS over that span. His strikeout rate dropped to 24 percent over that time frame, and he walked at a 12.2 percent clip. If Varsho continues to build on the end of his 2020 season, he could be in for a big 2021. Let’s look at his outlook for next season.

I discussed earlier that it seems people are buying in on a Daulton Varsho breakout in 2021. His early ADP of 210, being the 11th catcher off the board, is bold considering his 2020 performance. The Diamondbacks did seem committed to playing Varsho every day down the stretch, and he finished the season on a positive note.

Steamer projects Varsho to get just 374 plate appearances in 2021, which is discouraging. I would definitely take the over on that and say he gets at least 500, meaning he is likely to outperform his projection. Even if he splits time with Carson Kelly behind the plate, he should play most days in the outfield when not catching. His projected slash line is .256/.324/.438 with 13 home runs and 10 stolen bases. With his current projection, he is valued as the ninth-best catcher for 2021. If you extrapolate his projection to 500 plate appearances, he would be projected for 18 home runs and 14 stolen bases. With those numbers, he would bump to the sixth projected catcher. There is plenty of reason to believe this is a possibility.

There is a clear path for Daulton Varsho to be a top-five catcher in 2021 and beyond for Fantasy Baseball. With his plus hit tool and above-average speed, all the tools are there for Varsho to really take off. Long-term, dynasty owners should remain hopeful that Varsho catches enough to retain eligibility from year-to-year. There is still value for just an outfield version of Varsho, but the position scarcity at catcher makes him all the more valuable. For now, enjoy the potential breakout for Daulton Varsho in 2021.