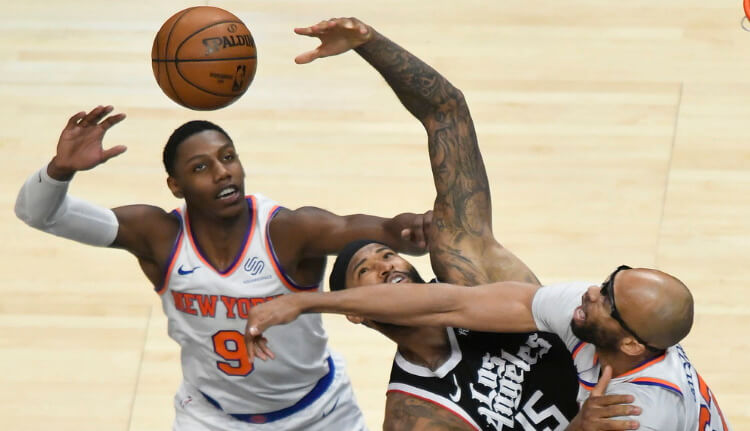 It’s been a while since I wrote an NBA DFS slate preview, and I know you all were destitute and begging for my takes. As a man of the people, I have returned! Now is as good a time as any to start back up again. We’ve got a great seven game slate on tap tonight, so let’s get into it!

Offensive Rating: 1st vs. 9th in the league

Defensive Rating: 12th vs. 21st in the league

Predicted Outcome: The Jazz are back at full strength for the most part, and their strength is offense with their offensive rating that’s tops in the league, vs. the Hornets weakness that’s bottom tercile in the league. So the Jazz will get a pace up matchup, which means more possessions for them to get/stay in the lead. Jazz should win this one relatively easily.

DFS Targets: Donovan Mitchell is practically free at $9000 in this matchup. I’ll be overweight relative to the field there. Gobert is cheap at $7600, but he hasn’t been in the best form recently, as he hasn’t scored over 33 fantasy points in three games. You should have some Jordan Clarkson shares at $6200. On the Hornets, I trust three players to hit their value: Ball, Rozier, and Bridges.

Offensive Rating: 21st vs. 28th in the league

Defensive Rating: 25th vs. 24th in the league

Predicted Outcome: If you’re watching this game on a Friday night, I’m a bit worried for you. But it’s not my job to judge, rather help you get paid. I think this game hinges on Kyle Kuzma’s health. If Kuzma plays, I don’t think Detroit has the talent to keep up. If he sits, Porzingis won’t be enough. Keep your eye on the injury report before tip.

Offensive Rating: 12th vs. 3rd in the league

Defensive Rating: 2nd vs. 26th in the league

Predicted Outcome: The Warriors are the better team and after dismantling the Heat without Klay, Steph, and Draymond, I don’t think they’ll have any problem beating Trae Young and their 26th ranked defense. Warriors win this one, even without Steph.

DFS Targets: On the Warriors, I like Klay, Jordan Poole, and Wiggins. Draymond is off limits until he gets back to 33+ minutes per game. He last played 29 minutes, so he’s probably getting pretty close. Otto Porter should provide good value at $4600. He’s scored over 37+ fantasy points the last two games he’s played. On the Hawks, I only trust Trae Young to hit his value.

Offensive Rating: 24th vs. 13th in the league

Defensive Rating: 10th vs. 5th in the league

Predicted Outcome: The Heat self-destructed the other day and showed why they pay Udonis Haslem millions to sit on the end of the bench. Haslem functions as coaching/management, but still has respect and is viewed as a peer among players. Haslem, Spoelstra, and Jimmy Butler got into shouting matches during their blowout loss to the Warriors, and who knows how they’ll look against the Knicks. If I’m being honest, it was probably a necessary argument and not a big deal. The Heat are the better team, so I think they’ll win this game.

DFS Targets: RJ Barrett at $8400 is the only Knick I trust against a stingy Heat defense. He’s had back-to-back 30 point games. On the Heat, I expect an inspired Jimmy Butler (who’s been pedestrian lately), and his price has come down to $8100. Bam is a good value at $8000. If Tyler Herro plays, he’s one of my favorite values on the slate at $6300.

Offensive Rating: 18th vs. 6th in the league

Defensive Rating: 6th vs. 13th in the league

Net Rating: 9th vs. 8th in the league

Predicted Outcome: The Wolves are the better team, but I think they’re going to be hurt by the fact Dallas plays at the slowest pace in the league. Luka is going to slow things to a halt, forcing the Wolves to play half-court basketball. Which they don’t thrive at. It’s the reason the Wolves won’t get far in the playoffs. This should be fun to watch, but Dallas should win.

DFS Targets: Luka and KAT are the only plays I’m interested in on this game, to be honest. There are potential values, but it’s always hard to figure out whether Maxi Kleber, Dwight Powell, Dorian Finney-Smith, or Reggie Bullock will be the plays to exceed their value. It’s probably smart to mix some of them in, but I tend to just fade them all.

Offensive Rating: 27th vs. 25th in the league

Defensive Rating: 30th vs. 29th in the league

Predicted Outcome: Don’t watch this game. Respect yourself. Rockets will play with more pace, helping them win this one.

DFS Targets: This could actually be a very high-scoring game with a lot of DFS values. No defense will be played. Chris Wood is value at $8200. Same with Josh Hart (if he plays) at $8000. Watford and Williams are interesting sub-$7000. Eubanks at $6300 is one of my favorite plays on the slate. I’m going to shy away from KPJ, as he’s a bit too volatile for my money. Jalen Green can smash or go 4 for 20. Sengun is too cheap at $5200.

Offensive Rating: 14th vs. 26th in the league

Defensive Rating: 9th vs. 7th in the league

Predicted Outcome: This should be an easy win for Philly. Harden and Embiid alone will overpower everyone on the Clippers (injured) roster. I think there’s legitimate blowout risk with this one.

DFS Targets: I’ll be underweight this game due to the blowout risk, but if you disagree, Harden and Embiid are the go-to players. Harden is more interesting at a $1200 discount to Embiid. Maxey is the new third scoring option and $7000 is reasonable. On the Clippers, Reggie Jackson and Marcus Morris are the only plays.