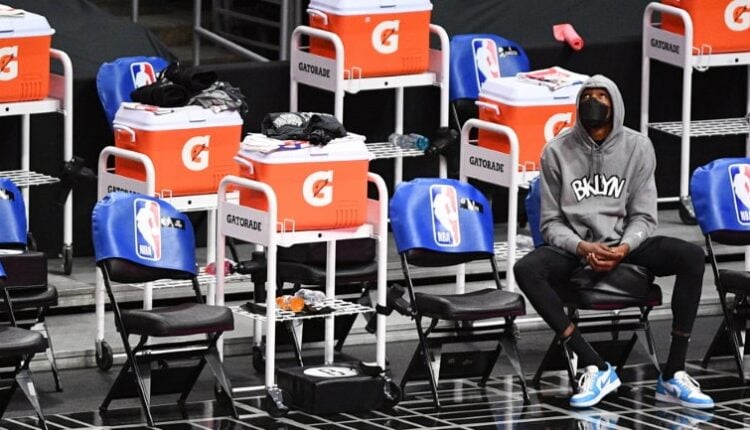 SWEET RELIEF! The NBA has finally returned! I’m in the minority that loves the All-Star game, but I’d prefer to have a juicy 11-game NBA DFS slate any day of the week. Let’s start our 2nd half of the season in a profitable fashion. Onward!

The Pistons have officially ousted Blake Griffin via a buyout (he’s on to the Nets), and the Hornets have announced that LaMelo Ball will remain in the starting lineup for the rest of the season (duh…). The Pistons are clearly in rebuilding mode, and it’s showing in their performance. Jerami Grant is probably the only player worth his salt on this squad. While the Hornets have a handful of young talented assets. They are both in the bottom tercile in terms of net rating, so I’ll lean on the talent disparity for my pick. I like the Hornets.

Kevin Durant is still going to be out for this one, but frankly, I don’t think they need him. We’re dealing with a historically talented offensive team in Brooklyn, and they won’t have to worry about any chemistry issues since Blake Griffin won’t be playing yet. The Celtics have turned things around after their losing streak, as they’ve now won four of their last five, but they simply don’t match up well against the Nets. Their 19th rated defense, won’t be able to contain the Nets’ league-leading offensive rating. I’m rolling with Brooklyn.

This is a game that reads closer on paper than I think it will be in real life. These teams are 10th and 11th in net rating, so you wouldn’t be crazy to expect a close matchup. However, I believe recent form matters, and the Raptors have lost four of their last five. On top of that, Kyle Lowry put his Toronto home up for sale, and has had to silence trade rumors surrounding him. That’s a lot for the leader of your team to bring to work. I think this game is Atlanta’s for the taking.

DFS Targets: ATL targets: Trae Young, John Collins, and Clint Capela. The wings on this team are too inconsistent for me to bet on them. TOR targets: Powell and Boucher.

This is one of those games I would’ve said was going to be a blowout, and don’t bother watching, or putting any of these players in your player pool. However, both Ben Simmons and Joel Embiid may be out of this game due to COVID protocols. If they play it’s a blowout. If they sit, the Bulls should have no problem handling the Tobias Harris led Sixers. I’ll assume the latter.

The Heat are starting to look like the team that represented the East in the Finals last year. The Magic…do not look like that. On top of all that, their best player appears to be on the trading block. So much so, he’s had to tell the media that he’s “happy where {he} {is}.” I think the Heat win a blowout in this one.

This should be an interesting one. The Knicks are coming off one of their best first half performances in recent memory, and have the league’s 2nd best defensive rating to show for it. They’re going to need every bit of that defense to handle the 3rd best net rating in the league and the 5th best offense. At the end of the day, I think the Bucks are too well-rounded for the Knicks to handle, but this should be an interesting game to watch.

Minnesota is terrible today. They were terrible yesterday. They will be terrible tomorrow. These are the universal laws that govern us all. Pelicans win easily.

DFS Targets: I wouldn’t target anyone from this game. I’d stick with the stars if you think it’ll be closer than I do.

The Mavs are 20th in net rating, while the Thunder are 26th. Neither of these teams are great, but only one of them has Luka Doncic. Shai is an incredible talent, but there’s a reason Luka was an all-star starter. I don’t anticipate this will be a blowout, but the Mavs are an underachieving 20th net rating. The Thunder are right about where they expected to be.

This should be an incredible game. I learned two things from the All-Star game. The first: Chris Paul can still dunk. While he’s no Anfernee Simons in that department, it’s clear the new vegan diet is keeping him young! The second: Dame Lillard apparently has effortless range out to half court??? I know he’s logo Lillard, but I didn’t think he was THAT pure. The Suns are the better team though. No doubt about it. I don’t expect this one to be all that close.

The Warriors have clearly found their footing and they are a fringe Western Conference playoff team. That’s nothing to sneeze at, especially when you’re missing your future Hall of Fame sharpshooter to injury. The Clippers are back healthy and Paul George and Kawhi Leonard will have no problem with the Warriors. Steph has to score 40+ to keep them in this, and he might, but that won’t be enough. Clippers.

The Rockets have lost 13 straight. That’s really all you need to know. Kings win.

DFS Targets: I wouldn’t target any players from this game. Stick with Kings starters, if you must.

Spring Training News and Notes from the National League