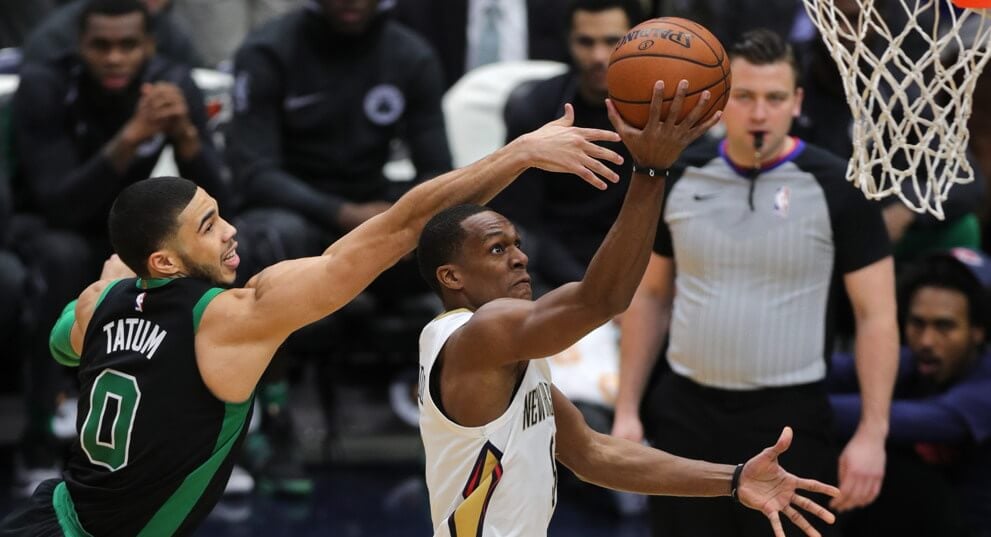 Before we dive into the slate, I just want to give all of our NBA DFS players a reminder: At about ~40% of the way through the season, it’s important to be intellectually honest with your performance.

Are you profiting at a high rate? Have you been losing a lot? Now is a great time to dive deep into your process to decide if what you’ve been doing is still successful, and if not, make some changes. Maybe you’ve just had a lot going on and need to take a break from DFS. Everyone needs a vacation. Regardless of your situation, it’s important to make sure this game is still a game for you, and that you’re having fun. I remember when the pandemic first started and we had no sports. Zero. Nil. I hated every moment of it. It’s a beautiful thing to have sports in our lives, so make sure that you don’t let any kind of losing streak take away your joy for the game. Now onto the slate!

Y’all should’ve seen the way my Wizards handled the Celtics a couple of days ago. It was a blowout. I could’ve told you as much (I used my sarcasm font for that sentence). How are the Celtics rewarded? Just the 5th ranked net rating in the league and the 5th ranked offense. A Denver team coming off beating the Lakers badly. I like the Celtics a lot, but I don’t think they can handle the Nuggets with their 15th ranked defense. The Celtics are searching right now. And that’s normal. Happens to every team. They’ll be fine. The Nuggets are not searching right now. Roll with them.

DFS Targets: I’ll look to the Celtics stars against a team like Denver: Jaylen Brown and Jayson Tatum. Maybe throwing a dart at Kemba Walker could pay off, but his salary is creeping up a bit past where I’m comfortable with his outperformance. On Denver I like Murray, MPJ, Nikola Jokic, and Paul Millsap as a dart throw.

The Pelicans and Grizzlies are essentially the same team. Both are incredibly young. Both have highly touted top picks that they’re building around. They are 19th and 15th in net rating, respectively. However, the Pelicans make their money on offense with the 7th ranked offensive rating (Grizz are 19th). The Grizzlies make their money defensively with the 11th ranked defensive rating (Pels are 28th). So where is the edge? I look to pace. Grizz are 13th in this stat, while the Pelicans are 22nd. I lean with the Grizz because of this.

DFS Targets: NBA DFS targets for this game include the entire starting five for both teams. I think we have a perfect storm in poor recent performance on the Grizzlies that has driven down salaries, as well as terrible defense for the Pelicans. The Pelicans have excellent offensive performance, and I don’t know that the 11th ranked defense will change that. I think we can expect a high-scoring affair.

The Raptors have nothing for the Bucks. Nothing. I was mentioning above that the Celtics are searching, well so are the Raptors. They just lost to the T-Wolves. The worst team in the league. The game before that they lost to the searching Celtics. That’s fine. It’s just a rough spell. I think they’ll make the playoffs eventually. But the Bucks are hitting on all cylinders.

DFS Targets: I tend to avoid blowouts because the starters may only play three quarters, and blowout statistics can be skewed to just one player, or spread out amongst everyone. Neither is really great for DFS purposes. I’ll fade this game, despite the star power.

Perfect timing. I was just speaking about how the T-Wolves are the worst team in the league. 29th in net rating. 24th in defense. 27th in offense. The Lakers are 4th, 1st, and 15th in those categories, respectively. They don’t need Anthony Davis to take care of Minnesota. Onward.

DFS Targets: Copy, paste the target section from above. And on a short slate like this, I don’t take the lack of DFS targets lightly. I just don’t want to throw darts for my money.

This is interesting. I would normally chalk this up to a blowout. 14th vs. 26th in net ranking is usually a formula for that. However, the Thunder are outplaying their stats lately, and recent form is absolutely a part of my algorithm to determine DFS value. The team that took the Lakers to OT twice in one week, can absolutely stay with the Blazers. I think the Blazers win, but the Thunder will stick around.

DFS Targets: On the Blazers I like: Dame, Gary Trent Jr., Robert Covington, Enes Kanter, and Carmelo Anthony. On the Thunder, it’s trickier because they have so many game-time decisions every night, but I like: Dort, Bazley, Horford, Hammy, and Roby (if he plays).

KD’s gonna be out a bit tending to an injury (doesn’t seem to be too serious), but that doesn’t make this game any less interesting. He’s missed plenty of games, and Kyrie and Beard are learning to work well together. It looks like Kyrie will be out tonight, but Beard is no stranger to carrying a team for an entire season. He can do it for a game. The Suns, on the other side, have won nine out of their last ten, and would be 2nd in the East if that was their conference. Make sure you don’t end up waking up to re-runs of Charmed on TNT tonight. We’re going to learn a lot about both teams from this matchup. Don’t be scared to take the Nets in this matchup. Look what the Clippers did last night without Kawhi and PG…