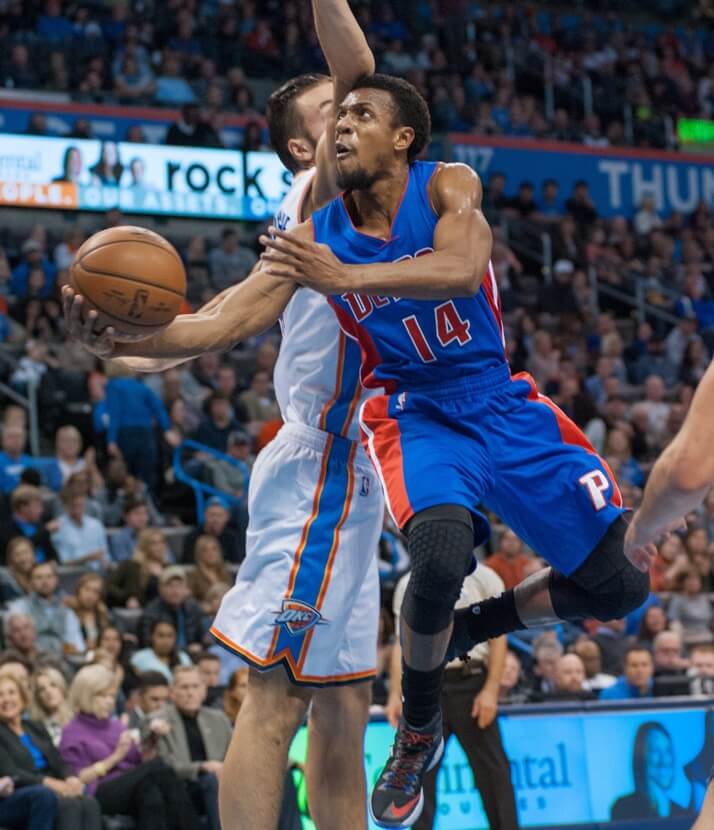 Week 20 comes to a close, giving many owners one more day to attempt to win their first-round playoff matchup. There are nine games on the slate with many having real-world implications as well as fantasy. The Pistons are flying high right now, with their recent form coinciding with the return of a healthy Ish Smith. Smith’s scoring has been up and down over the last two weeks but he has been a consistent source of assists, averaging almost six per game over his past seven. He typically offers little outside of dimes but he can chip in with points and rebounds well for a point guard.

The Bulls are much-improved since the All-Star break, thanks in large part to the impressive play of Zach LaVine. LaVine has been playing through minor ailments and this is once again the case Sunday. He is yet to miss significant time and the probable tag indicates he is likely to take his place in the starting lineup.

The Pistons are one of the hottest teams in the league and defeated the Bulls only two days ago. Ish Smith has been a factor in their recent form and appears as though he is finally healthy. With both he and Reggie Jackson playing well, the Pistons have stormed into the sixth-seed and it seems likely they will be playing post-season basketball.

Kawhi Leonard is out again Sunday, with his ‘rest’ days now becoming simply laughable. There is no reason for the Raptors to rest him other than him basically not feeling like playing. It certainly raises questions about his future with the team, given his apparent lack of motivation. It could be assumed he would want to be on the court if he was playing for a franchise, he was passionate about. There is no real benefactor here, although OG Anunoby should move into the starting lineup.

Goran Dragic returned for the Heat in their last game, although played limited minutes in the blow out victory. He will be eased back into the rotation over the next few games and will likely impact the fantasy value of players such as Justise Winslow and Dion Waiters. Waiters remains a somewhat serviceable three-point streamer but there are certainly more reliable options available in many leagues.

Domantas Sabonis sounds as though he is on track to return Sunday, a welcome addition for the Pacers who have struggled over their past few games. They have won just two of the five games since the injury but will need to get back on track if they hope to maintain the third seed in the Eastern Conference. Sabonis’ return has little impact from a fantasy perspective as no one player really stood up during his time on the sidelines.

The 76ers could also get one of their key pieces back Sunday, with Joel Embiid appearing as though he could be very close to a return. The 76ers have gone 4-and-4 in the games since Embiid was shelved and need to lift that winning percentage if they are to secure a home playoff series. This game is crucial for both teams and should be highly entertaining.

Anthony Davis is questionable heading into Sunday, however, owners should probably prepare for him to miss the game. The Pelicans are basically looking for any excuse not to play him at the moment and will attempt to stretch this out a little longer. In his absence, Cheick Diallo should see an increase in playing time. In 23 minutes last game, Diallo finished with 16 points and 12 rebounds.

DeWayne Dedmon missed Saturday’s game after being downgraded from probable earlier in the day. The fact he was initially questionable would indicate he is close to returning and may have been held out on the first game of a back-to-back. If he is ultimately ruled out again, Alex Len could have another game of value, although, typically produces rebounds, blocks, and occasional scoring.

The Magic sit just one game out of the eighth seed in the Eastern Conference but face a Grizzlies team that has won back-to-back games against the Jazz and the Trail Blazers. There is very little to report on in terms of injuries for the Magic and streaming any of their fringe players is likely going to prove fruitless.

Delon Wright continues to increase his involvement on both ends of the floor, scoring in double-digits in three straight games. More importantly, he has played at least 27 minutes in each of those games, a great sign for his value moving forward. As long as Mike Conley is healthy, Wright will remain more of a fringe pickup in 12-team leagues. If, however, Conley is rested or shut-down, Wright becomes a must-roster player almost everywhere.

The Rockets currently occupy the third seed in the West, on the back of winning seven consecutive games. James Harden required x-rays on his wrist after the last game but appears on track to play. Owners should keep an eye on the injury report leading up to the game and if he is ruled out, Gerald Green could have increased value.

Jalen Brunson has played at least 28 minutes in four of his last five games, averaging 13.0 points and 5.4 assists. He doesn’t have the highest upside but is certainly worth a look on the final day of the wee, if you need points and dimes.

Allonzo Trier kept his streak of double-digit scoring games going Saturday, ending with 10 points in 24 minutes. His run now sits at six straight games although the last effort was scrappy. He was just 3-of-10 from the field and 4-of-8 from the free throw line. His playing time has somewhat stabilized and he looks to be about as consistent a prospect as you will find on the Knicks right now.

The big news to come out of Saturday’s game was the potential injury to Karl-Anthony Towns. He suffered a non-contact injury to his knee at the end of regulation, checking himself out of the game. Towns was apparently in good spirits after the game and was seen getting around under his own power. He will have further tests Sunday and let us remember that both Zach LaVine and Jabari Parker were able to move around after they suffered season-ending knee injuries. Towns has to be considered questionable heading into Sunday and based on the rotations in the previous game, Anthony Tolliver could be worth considering as a three-point streamer.

The Bucks recorded a comfortable victory over the Hornets on Saturday, allowing many of their starters to rest down the stretch. Saturday’s win makes the Bucks the first team to reach 50 wins for the season, a feat that should not be overlooked. It appears as though they will finish the regular season with the best record in the NBA which is going to put them in a favorable position heading into the playoffs. The Spurs will certainly pose a bigger challenge than the Hornets and should provide a good test for the Bucks on the second night of a back-to-back.

The Spurs have won four games in a row heading into Sunday and will aim for five against the high-flying Bucks. Rudy Gay has popped up on the injury report and is questionable with an illness, presumably acquired sometime during the last 24 hours. If he is forced to miss the game, Davis Bertans could see an uptick in his playing time. He typically provides very little outside of points and three-pointers even when he is playing 30 minutes, and so makes for a risky play.

Tyler Johnson had another productive game Saturday, closing out with 14 points, seven rebounds, seven assists, and one block in 33 minutes. The game was a blowout and so his playing time is a tremendous sign for his value moving forward. His stat line has been eerily similar over his past three games and would likely indicate his fantasy ceiling. If Johnson is still floating around on your waiver wire, give him a look if you need point guard numbers heading into your playoffs.

The Warriors are coming off a statement victory over the Nuggets and will be tough for the Suns to overcome, especially on the second night of a back-to-back. Klay Thompson returned in the last game and lit up the Nuggets for 39 points, including nine triples. The Warriors are basically running at full health right now and are simply looking to work on their chemistry heading into the playoffs. From a fantasy perspective, there is no real point to picking up any of the fringe players and owners needing an injection of stats should look elsewhere.