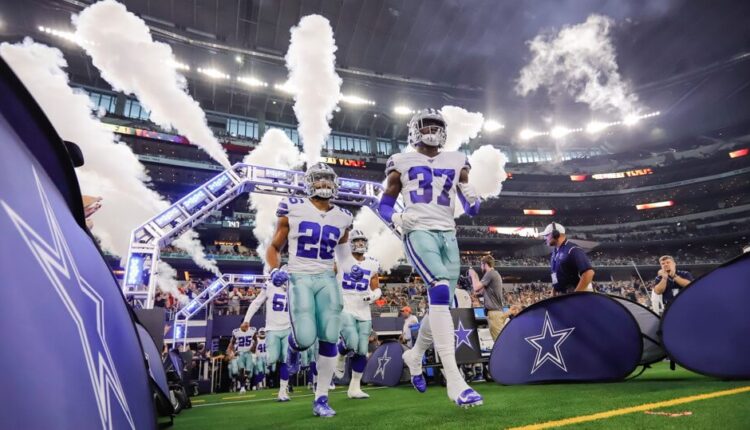 We had a brilliant article last week with our D/ST streamers, with all eight recommendations allowing 21 points or fewer. While they all didn’t go crazy in terms of fantasy points, that means the process is correct. It’s all about pairing good defenses with supreme matchups and using Vegas lines to determine if it’s a good play. The New England stream was obviously the cream of the crop in Week 2 and we’re going to go right back to the well here…

For help setting your lineups, check out our Week 3 Waiver Wire Recommendations and our Week 3 FAAB Guide.

This is the third-straight article for the Cowboys and this is definitely going to be the last time they find themselves as a D/ST streamer. The reason for that is because I expect them to be close to 100 percent owned after waivers run. The fact that they’re only 70 percent owned as of Tuesday is an absolute crime and it’s clear that people are sleeping on them. Not only is this one of the best units in the league, but they also happen to have the best matchup in football here.

The Dolphins currently rank dead-last in points scored, yardage and turnovers. That’s why many people consider this the worst team in football, as they’re currently being outscored, 101-10 over the first two weeks. Jeez, and you thought you had it bad. Those ugly numbers have garnered the Cowboys as a 22-point favorite in this fixture, with Miami projected for only 13 points. That’s the lowest implied team total of the season and it’s really no surprise considering their nightmarish statistics. This is no joke of a defense either, with the Cowboys allowing just 19 points per game this year after ranking seventh in yardage allowed and sixth in points surrendered last season.

People need to start taking notice of this Bills defense. Allowing the second-fewest yards in the league last season was a good indicator of how good they can be and it’s a very strong unit. They currently allow the sixth-fewest yards in the league this season and the fifth-fewest points. Those stingy averages are backed up by 16 interceptions and 21 forced fumbles last year, which both ranked Top-7 in the NFL.

That’s terrifying news for an offense like this, with the Bengals posting a 1-9 record without A.J. Green dating back to last season. Trusting a record is always dangerous but Cincy is averaging just 17 points per game in that span while posting the worst rushing numbers in the league this year (59 rushing yards on 33 attempts). That’s why the Bills enter this game as a 6.5-point favorite, with Cincy projected for only 19 points.

Thursday games tend to be ugly and it’s always worth a shot to use defenses in this spot. The offenses simply aren’t ready after resting for only three days and we definitely can’t trust one who just lost their starting quarterback. In their first game without Nick Foles, the Jaguars scored just 12 points while throwing for just 178 yards. The simple fact is, Gardner Minshew is a sixth-round pick and is not ready for this responsibility.

It’s not like this offense was any good before he hopped on the train either, with the Jags ranked 27th in yardage and 31st in points scored last season. That doesn’t even take into consideration that they committed the fifth-most turnovers last year and the third-most sacks allowed. That’s bad news against a defense like this. The Titans allowed the eighth-fewest yards and third-fewest points last season. That has appeared to carry over to this year, with Tennessee ranked Top-6 in points allowed, turnovers and sacks. The 40-point total in this game indicates that it should be an ugly one, which is what we’re looking for with our D/ST streamers.

As someone who lives in Denver, I can tell you that this is one of the worst offenses in football. That’s clear by the fact that they rank 28th in points scored, as they simply don’t have enough weapons on this unit to compete. That’s why they enter this matchup as a 7.5-point underdog and there’s a lot going against them here. Traveling to play a 1ET game against an NFC team is always a tricky task for an AFC team and it’s given the Broncos an implied team total of 17.5.

What makes it even more terrifying is the fact that Green Bay has been one of the best defensive units in the league early on. In fact, the Packers are allowing just 9.5 points per game, the second-best mark in the NFL. The offensive line is one of the major weaknesses for this bad Broncos offense and that’s scary with Green Bay recording the sixth-most sacks since the beginning of last season. Not to mention, the Packers five takeaways tie them for the best mark in the league so far this season as well.

Jacksonville Jaguars (vs. TEN): I’ve seen Jacksonville dropped in numerous leagues of mine and they still have plenty of talent to be one of the best D/ST’s in the league. Facing a Tennessee offense who ranked 25th in total yardage, 27th in points scored, and 22nd in sacks surrendered last season only adds to Jacksonville’s intrigue, as they currently rank 27th in total yardage this season.

San Francisco 49ers (vs. PIT): This would have never crossed my mind a week ago but this is an offense who’s lost Ben Roethlisberger, Le’Veon Bell, and Antonio Brown over the last year. That means San Fran will face Mason Rudolph and an unhealthy James Conner, which is huge for a defense who’s allowed just 28 points combined in their first two games while recording seven sacks, five turnovers, and two TDs.