Cody Bellinger – What Went Wrong? Can he Rebound In 2022? 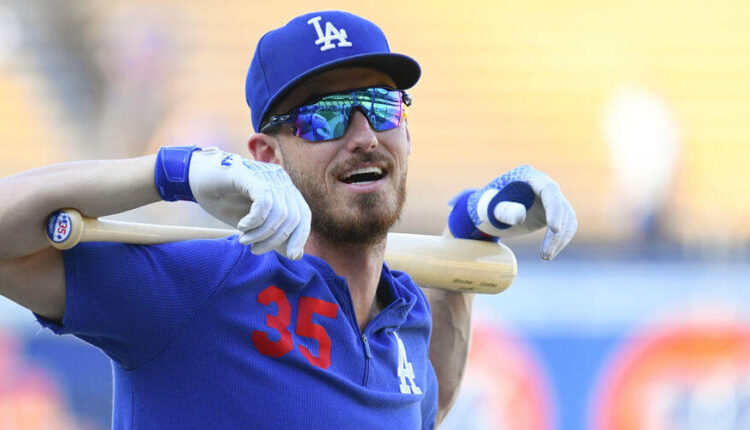 If fantasy managers drafted Cody Bellinger in the first or second round last season, there’s a recency bias against the 2019 NL MVP. The story of Bellinger’s 2021 season involved injuries that included recovery from shoulder surgery in November 2020, a lower leg injury, and hamstring tightness. Bellinger’s shoulder injury likely contributed to the skills changes and the dip in power. Several reports have surfaced recently and previously regarding Bellinger making swing adjustments.

What are we doing with Cody Bellinger?

With seemingly most folks staying away from Bellinger, let’s do a deep dive. What went wrong with Bellinger? Is 2019 an outlier season with the juiced ball? Will Bellinger rebound in 2022? If so, what skill changes need to happen? We’ll examine what went wrong and the path for Bellinger to bounce back in 2022.

What went wrong with Cody Bellinger in 2021? It’s reasonable to guess that Bellinger’s peak 2019 season of 47 home runs, 121 runs, 115 RBI, and 15 stolen bases with a .305 batting average could be due to the juiced ball. Although it’s not the same profile and reasoning, Yoán Moncada and Hunter Dozier posted peak seasons in 2019.

In November 2020, Bellinger underwent shoulder surgery for a dislocated shoulder on his right side. There’s a chance that the shoulder surgery and injury impacted Bellinger’s baseball skills. It’s a similar trend to Eugenio Suárez, who I recently dug deep on. When researching Suárez, the launch angle tightness changed, and Suárez struggled for a season plus after surgery. Meanwhile, Bellinger returned within seven months. Add in the lower-body injuries, and Bellinger’s power numbers plummeted. 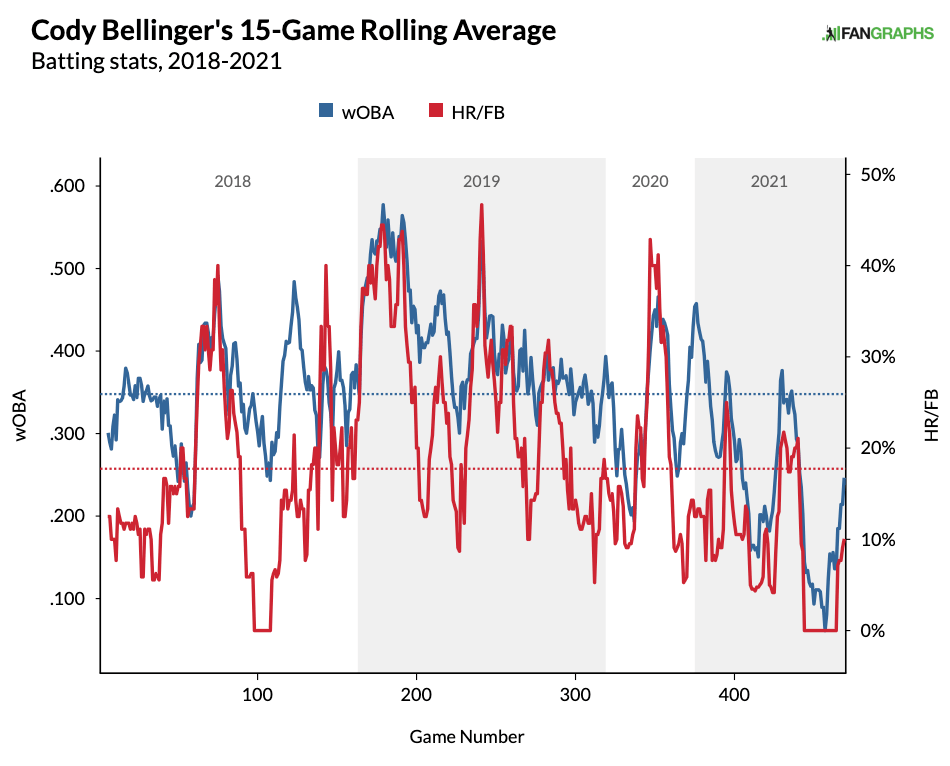 Unfortunately, the HR/FB% dropped to a career-worst rate of 9.4% versus a 19.4% career rate. Although the HR/FB% in 2019 might not have been sustainable, the shoulder injury impacted Cody Bellinger’s home run efficiency and contact quality.

Cody Bellinger never displayed a chase rate above 30% in his career. However, Bellinger’s 35.2% O-Swing% in 2021 versus a career rate under 29% stood out. Meanwhile, the contact rates dipped, evidenced by the 77.1% Z-Contact% and 72.3% Contact%. That likely indicates a timing, pitch recognition, or mechanical issue. 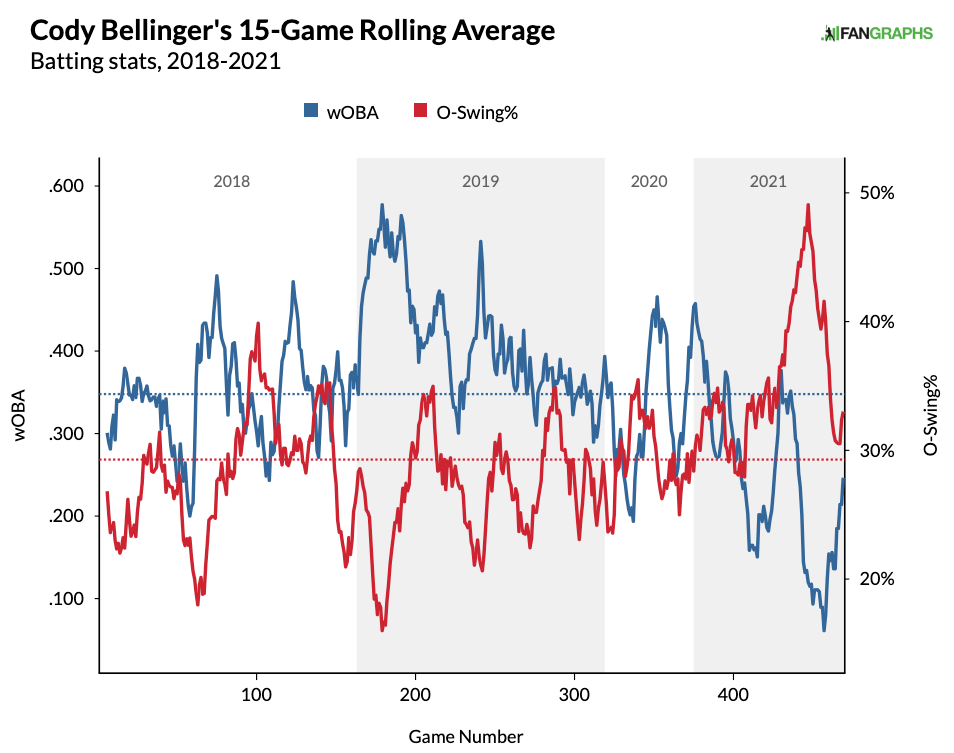 In 2021, Bellinger’s O-Swing% peaked at almost 50% (49.1%). Bellinger’s chase rate tanked around the beginning of August, shortly after dealing with hamstring tightness that he experienced earlier in June. Around that time, Jorge Castillo of the LA Times reported that manager Dave Roberts would use Bellinger as a platoon player.

So far, almost all the underlying skills of chasing more, making less contact, and launch angle inconsistency align with the poor results. I’ll keep bringing up the shoulder surgery, plus other injuries impacting him. A platoon hitter isn’t what we’re signing up for when drafting a hitter around pick 100 in 15-team leagues. 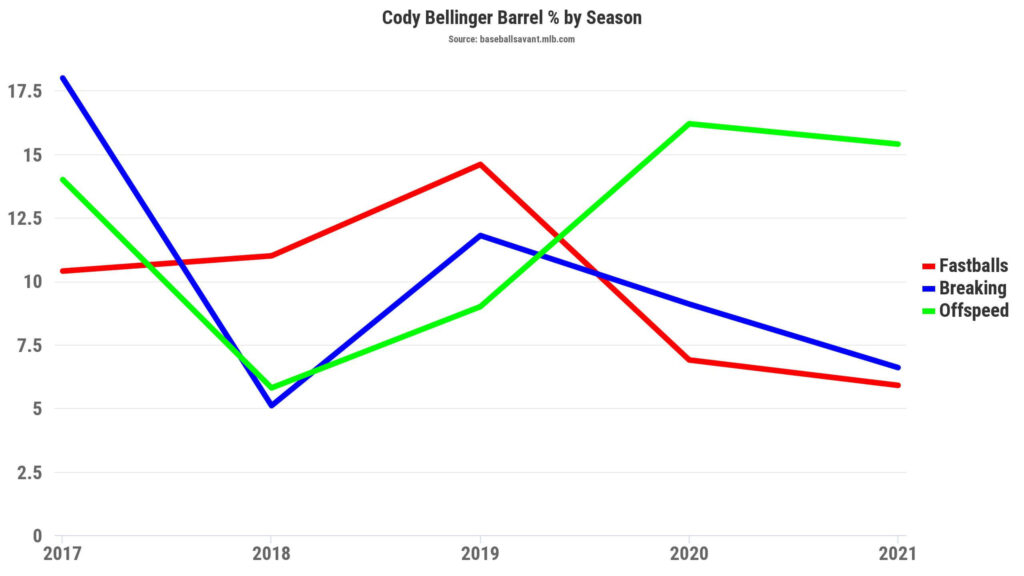 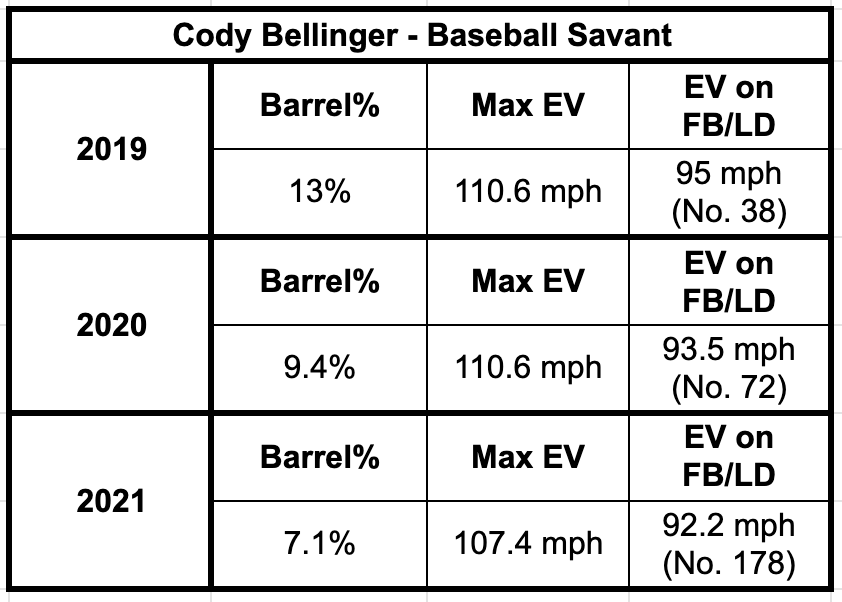 Also, Bellinger’s 107.4 mph maximum exit velocity fell to a career-worst in 2021. Unsurprisingly, Bellinger’s exit velocity on flyballs and line drives dropped to 92.2 mph (No. 178), when it typically ranked in the top-75. At this point, you’re probably wondering, where’s the good news on Cody Bellinger?

A quick note that these are guesses for a possible swing adjustment, and I’m not a swing mechanics expert. One note via Dodgers beat writer Bill Plunkett involved Bellinger feeling strong after surgery.

Said he went back to the more familiar hand position because he is feeling strong again (after shoulder surgery) and "group effort" with hitting coaches, looking at video feedback on his barrel angle before contact

We’ll look at where Cody Bellinger thrived and crushed the ball in 2019, plus how that changed over time in 2020 and 2021. Keep in mind that it’s a relatively small sample to include the past two seasons, given the unusual conditions, COVID-19, and multiple injuries. 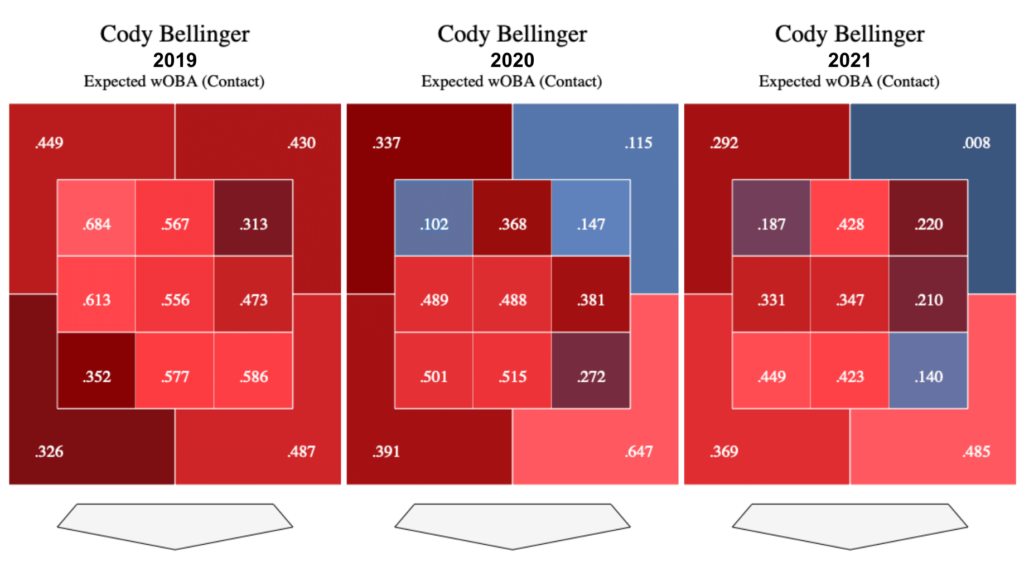 In 2019, Bellinger boasted red quality numbers in almost every part of the zone, even outside. The only “weaknesses” for Bellinger that season were pitches down and away or high and inside. Then in 2020, Bellinger struggled up in the zone with similar trends in 2021, plus the issues low and inside. Although it doesn’t perfectly align, Bellinger’s whiff rate by zone reflects the lower xwOBAcon. Granted, it’s a small sample of 34 pitches thrown in zones three, six, and nine on the inside of the plate, but Bellinger had a .286 wOBA. That said, it’s not the end of the world because all hitters have weak spots, even Juan Soto or Mike Trout.

It also seems plausible that Bellinger struggled with timing and pitch recognition based on the pitch results, although injuries likely played a factor. After typically performing well against pitches in the zone, Bellinger fell hard in 2021. With so many reports of Bellinger adjusting his swing, it’s hard to glean many actionable takeaways other than he’s making attempts, and hopefully, it translates into positive results.

Will Cody Bellinger Rebound In 2022?

One of the hottest questions of the off-season involves whether or not Cody Bellinger will rebound in 2022. In 2021 NFBC Main Event leagues, Bellinger’s ADP sat at 16.9 as a late first-round pick in 15-team leagues. Over the past few weeks in March, Bellinger’s ADP hovers around pick 100. To some, the ADP discount still carries risk in the sixth or seventh round.

Cody Bellinger is tweaking his swing again. The Dodgers think he’s close to a breakthrough

But he also has 14 Ks in 19 ABs this spring, and the regular season is fast approaching

More on the latest challenges the former MVP is trying to overcome:https://t.co/iG1JKpQpEy

Maybe the hot playoff stretch of 39 plate appearances helps provide a bit of optimism with one home run, five stolen bases, and a .353 batting average. However, it came with a .500 BABIP. Or maybe, Bellinger finally “fixes” the swing.

From a Run-Value perspective, Bellinger’s 2018 to 2021 Swing-Take data bounces all over the board. In 2018 and 2019, Bellinger showed patience in the chase and waste areas outside the strike zone. Be mindful of the small sample of pitches thrown in those areas.

Bellinger’s 2021 Swing-Take Run-Value profile looks similar to 2018 but worse, particularly in the zone and shadow areas. That aligns with the struggles in the zone, as noted earlier. The projection systems look optimistic for a rebound with 25 home runs, over 150 runs plus RBI, nine stolen bases, and a .242 batting average per the BAT X. However, Roster Resource projects Bellinger towards the bottom third of the lineup with the addition of Freddie Freeman and potentially a healthy Max Muncy.

That doesn’t mean Bellinger remains locked in towards the bottom, especially if he returns healthy and the plate discipline and batted ball profile regresses closer to the career averages. It’s not automatic that Bellinger will rebound, but we’ve at least identified several “fixable” issues to help him bounce back in 2022.