The Clayton Kershaw Conundrum: Where Do You Draft Him in 2019? 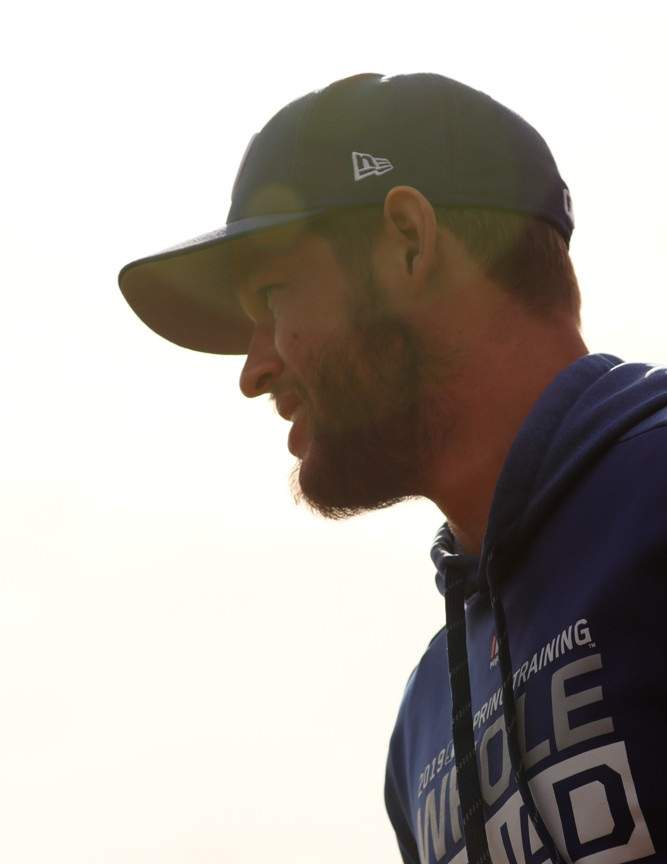 Hell, it was just in 2016 I wrote an (unpublished) article on why Kershaw should be the No. 1 pick in 2017. At that time, his ability to give you elite numbers in all four categories he impacts. The reason it was unpublished? He injured his back that season and has been battling it ever since. Now, obviously, we are no longer discussing Kersh going as the number one pick, or even as the number one pitcher. But the question still remains: How to value Kershaw in Fantasy Baseball in 2019?

Where do you draft Clayton Kershaw?

First, I want to take a look at his skill set and see if there has been a reduction or if his production decrease has solely been tied to the missed time.

It is pretty crazy that we can talk about reduced production when Kershaw had a 2.73 ERA, a 3.19 FIP and xFIP in 2018. Those numbers would be amazing for most pitchers. However, for Kershaw that was the highest his ERA has been since 2010 when it was 2.91.

I know this is a projecting forward piece, but let’s take a moment to appreciate the greatness that was Kershaw, easily the most dominant pitcher in my lifetime. That was also the highest his FIP has been since his rookie season (4.08 in 2009) and the highest his xFIP has been since it was 3.25 in 2012. While the ERA and metrics are up, that is not the scariest part.

To me, it is far scarier to see that Kershaw posted a 23.9 percent strikeout rate. That is the lowest it’s been since his rookie season in 2008. Not only that, but he had never fallen below 25 percent in any season. While 23.9 percent is not far below 25 percent, he had been above 29 percent every season since 2014, until last year.

He actually averaged less than a strikeout per inning for the first time since 2013. Want another reason to be scared? His hard-hit rate jumped last year to 36.1 percent, which is above league average for a starter (35.6 percent). I am not going to freak out over him being a half a percentage point higher than league average. But Kershaw is not a league average pitcher. Prior to 2018, his hard hit rate was below 29 percent in every season of his career. That is a very concerning sign.

What’s Up with Kershaw Being Down

As we can see now, the elite production took a big hit in 2018. The next step is to find out why. First, let’s take a look at his arsenal. In 2018, Kershaw threw his four-seam fastball just 40.83 percent of the time, according to Brooks Baseball. That was the lowest of his career, but we have seen a reduced usage on this pitch in every season since 2010. Kershaw’s usage with the curveball (16.62 percent) was on par with 2017. The biggest jump was in his slider usage. He threw the slider 41.98 percent of the time, which is by far a career-high. The previous high was 34.37 percent in 2017.

However, the decreased usage of his fastball is not a red flag as you may think. This has become a trend in baseball, as starters threw their fastballs just 53.5 percent of the time in 2018, down from 54.6 percent in 2017. That number in 2018 is the lowest fastball usage by starters since at least 2002, which is as far back as you can track on Fangraphs. That is despite starters averaging 92.4 MPH on the fastball, the highest rate since 2002 (also as far back as we can track).

The biggest concern for me is not the fact that Kershaw threw his fastball less, but that batters just hit it like they never have before. In 2018, batters hit .291 against his fastball. They have consistently hit below .245 in the prior three seasons. Luckily for Kershaw, batters only hit .191 against his slider and .188 against his curveball. However, that is the highest batters have faired against the curve since 2010. What about the quality of contact? This to me is the most important part. In 2018, batters had a .217 ISO against his fastball, which is the highest rate against Kershaw’s fastball in his career. In 2017, the number jumped up to .199, which was a red flag, and continued to climb in 2018. His curveball generated just a .027 ISO, proving to still be one of the best pitches in baseball. His slider had a .109 ISO, which is strong. Clearly, the issue is with his fastball. Here is a very scary sight to see for those backing Kershaw this season: 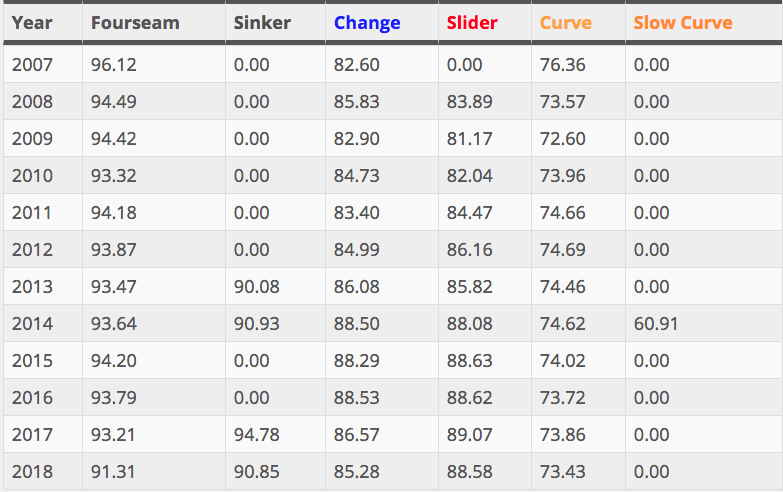 As you can see thanks to Brooks Baseball, Kershaw saw a vast velocity dip in 2018. He was down 2 MPH on the fastball, which obviously hurts. Not only does that make the fastball easier to hit, but it is also a closer speed to his secondary pitches, making him easier to figure out as a whole. Kershaw still has a very strong curveball and slider, but his fastball is the big issue. At 30 years old with over 2,000 regular season innings pitched and even more in the playoffs, it is no wonder we are starting to see physical drop-offs with Kershaw. The question still remains though: What to do with him in Fantasy Baseball?

The risk simply outweighs the reward. To me, there are 14 SP1’s this season, with a few just on the outside looking in. Kershaw comes in at 14 for me, in my third tier of starting pitchers. In that tier are Trevor Bauer, Noah Syndergaard, Luis Severino, Carlos Carrasco, and Kersh’s young teammate Walker Buehler. All of those pitchers have very similar upside. Some of them also come with health risks, like Kershaw, who has averaged 162 innings over the last three seasons. However, none of them are also dealing with declining skill sets. As we have addressed, Kershaw saw diminished ability in 2018. Some will blame that on the back injury, but do we have any confidence that he will stay fully healthy in 2019? I mean, he has already dealt with soreness in his throwing shoulder.

To me, the issue is that you do not get that discount with Kershaw. There will almost certainly be someone willing to take the shot on him. He went in the second round of Tout Wars Draft and Hold, and that is a league in which you cannot make trades or pickups. I got Bauer and Syndergaard after Kershaw was selected. I would play it safe and grab one of those starters. It seems like many of you agree with this opinion as well:

Do you trust Clayton Kershaw enough to draft him? #FantasyBaseball

Could Kershaw stay healthy and bounce back in 2019? Sure. But I would not bank on it. I will let someone else take the shot on both him staying healthy and returning to his pre-2018 form, while I end up with two other stud pitchers. I recommend you do the same.

Are you taking a shot at Clayton Kershaw this year? For more great rankings, strategy, and analysis check out the 2019 FantraxHQ Fantasy Baseball Draft Kit. We’ll be adding more content from now right up until Opening Day!