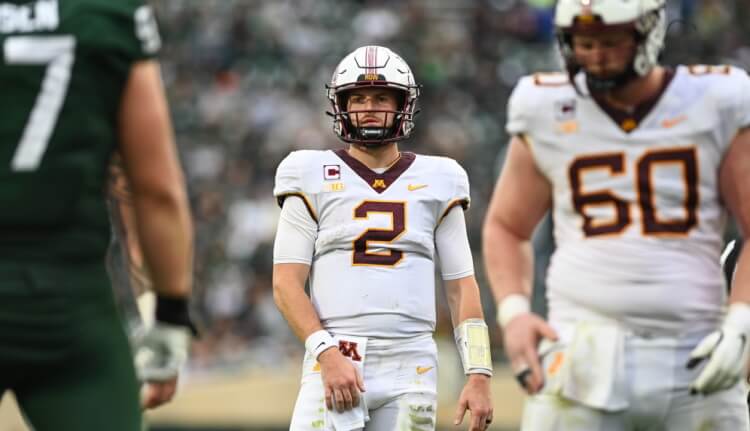 Morgan is coming off a great game against MSU last week in which he was an outstanding 23-for-26 for 268 yards and three touchdowns. He has thrown three aerial strikes in each of his last two outings. Everyone focuses on the Gophers’ run game, and if Morgan can repeat last week, the Big 10 is in trouble.

This guy is unbelievable and someone I am monitoring in a few of my fantasy leagues. He is averaging 20 carries a game and 108.3 YPG and has five scores this season. Judkins has been great the past few weeks, and Kentucky’s run defense will face its first big test.

If you read any of the Gridiron Scholar’s or my offseason content, you would see that we were both high on Miller, but here I am going to take the credit as Miller was in my RB sleepers’ article this offseason. Miller was a workhorse last week getting 17 carries for 142 yards a touchdown and 21.7 FPP. Oklahoma ranks last in the Big 12 in rushing yards allowed, and the Sooners should be on upset alert again this week.

Flowers had an insane game in Week 1, but has been relatively quiet since. BC has not been playing well at all and their O-line is a big-time issue. However, I think Flowers brings great value at this number and that’s what this article is for, helping uncover value. The upside on the Eagles’ speedster is there, and Louisville’s defense is not the best.

Though he is still considered a game-time decision, coach Mike Locksley seems to be optimistic about his QB being available. If he is dressed and ready to go, I really like him for the afternoon slate. The Spartans rank 11th in the Big 10 in pass defense, and allowed Tanner Morgan to light them up last week. If Morgan can do it, so can Taulia.

Hemby has been solid this season posting 17 FPPG. And with Michigan State’s weak defense, I think Maryland will see a lot of offensive production, and Hemby will be involved. The redshirt freshman has 16 carries in each of his last two games and has two 100-plus yard performances. He also has 10 receptions in his last three games, giving a slight boost to his production.

This one is easy and doesn’t need much of an explanation. This dude is awesome and Northwestern’s defense ranks 2nd to last in the Big 10 in rushing yards allowed (161 YPG). I know Penn State has a whole RB room of production, but Singleton is the leader and should have a solid performance on Saturday.

Banks has been one of my favorite players to watch this season. We heard all offseason about AT Perry being their go-to guy, and Donovan Green coming back from injury, but so far Banks has been their most productive option. In his last two games, he is averaging six receptions for 98 yards, two scores, and 24.8 FPPG.