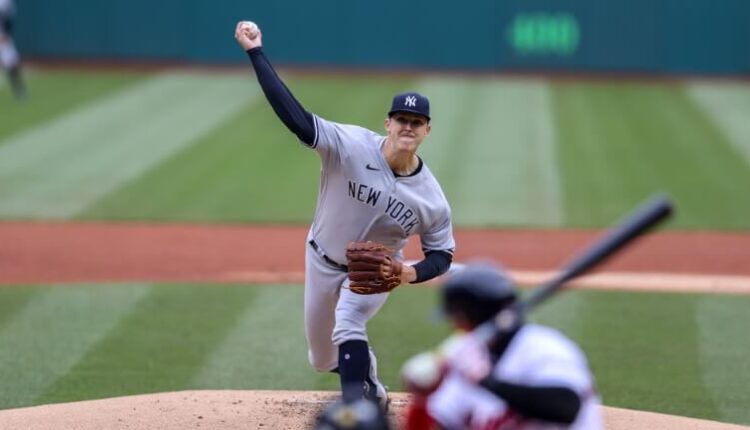 In the final fantasy baseball buy or sell installment of 2021, we look at two sleeper starting pitchers in Jon Gray and Jameson Taillon. Gray switched teams, and it’s a positive change for the former Rockies pitcher. Meanwhile, Taillon intrigued me heading into 2021. However, we observed some ups and downs in his first season since 2019. Taillon suffered an ankle injury towards the end of the season that required surgery, and he’s slowly rehabilitating the injury from surgery in late October. Let’s dive into the surface and advanced metrics to see whether we should buy or sell Jon Gray and Jameson Taillon.

Check out the rest of my in-season and off-season buy or sell pieces here. Also, if you love dynasty baseball leagues, check out OBP Rankings by Chris Clegg. Eric Cross also dropped his 2022 Positional Rankings for Redraft Leagues.

All of our birthday wishes came true as we hoped for a Rockies pitcher to move away from Coors Field. That happened for Jon Gray, although I’m still waiting for one of my favorites in Germán Márquez. Throughout Gray’s seven-year career with the Rockies, he finished with a 4.59 ERA, 1.34 WHIP, 23.9% strikeout rate, and 7.9% walk rate. Gray totaled 829.1 innings with an average of over 149 innings pitched in four seasons, where he started 25 games or more. Outside of 2017 and 2019, where Gray boasted an ERA of 3.67 and 3.84, he logged an ERA of 4.59 or higher. 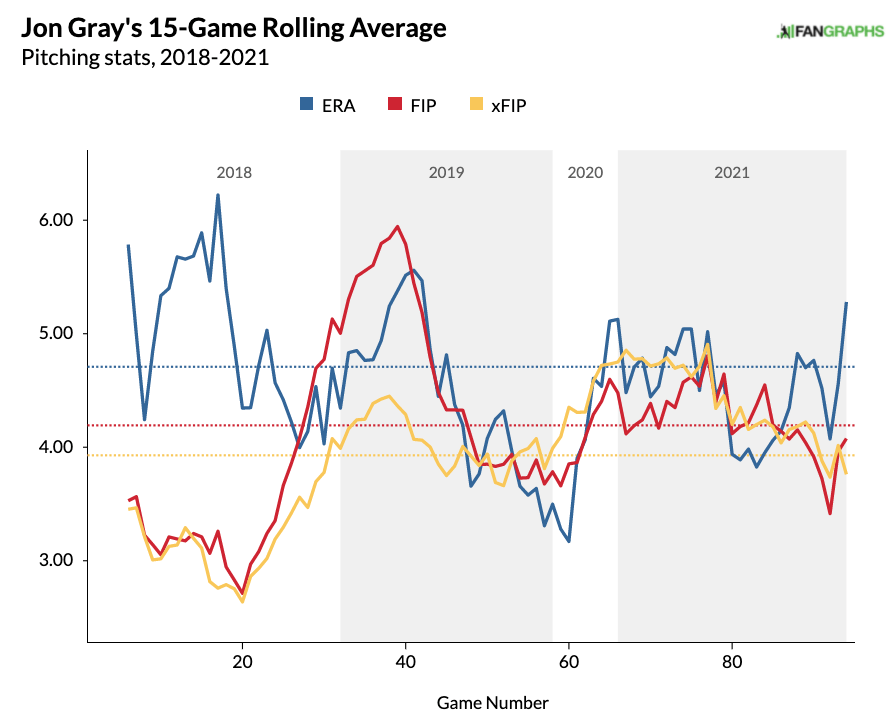 We note those ERA estimators because there’s a chance that Gray pitches closer to a 4.00 ERA or lower now with the Texas Rangers. In 2021, the Rangers home ballpark ranked 22nd with a 0.99 Park Factor in wOBA and 18th with a 0.99 BABIP Park Factor per EV Analytics. That means the Globe Life Field rates about average in both Park Factors. We noted wOBA and BABIP because Coors typically inflates BABIP and Gray ranked in the 55th-percentile with a .306 xwOBA in 2021.

However, Gray returned in late June to finish the season with a 4.81 ERA, 1.36 WHIP, 28.6% strikeout rate, and 8.3% walk rate. The BABIP (.336) and LOB% (73.5%) regressed, which boosted the ERA even though Gray’s K-BB% looked better. Gray’s fastball velocity increased slightly over one mph in the second half of the season.

During the second half, Gray landed on the injured list with a forearm injury and missed a minimum of ten days due to forearm tightness. It’s a small sample, but Gray returned, and the 31.4% K% and 4.9% BB% looked incredible. Unfortunately, the ratios of a 7.15 ERA and 1.37 WHIP stunk because he gave up a ton of home runs (7) with a 30.4% HR/FB%. Sometimes it’s worrisome when a pitcher deals with forearm tightness, but the skills looked solid, plus the fastball velocity remained up at 95.3 mph. If folks pay attention to the skills in the second half, then we should buy into Gray rather than sell or stay away.

Throughout Jon Gray’s career, he typically relied on the four-seamer and slider, then sprinkled in a couple of other pitches in the changeup and curveball. In 2021, Gray didn’t throw a third pitch at a double-digit rate for the first time in the Statcast era. He threw the four-seamer 47.6%, with the slider at 38.1%. Then Gray tossed in the changeup at 8% and curveball at 6.3%. Gray used the curveball for a double-digit rate in four out of the past six seasons. 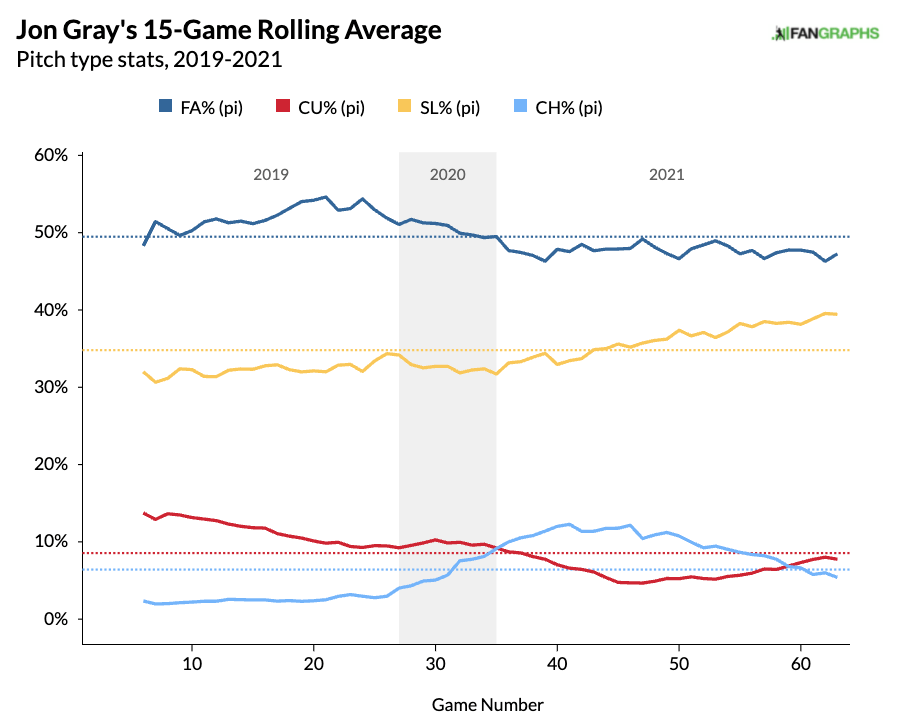 Regardless, the slider rates as his best pitch, evidenced by an 18% swinging-strike rate, .238 wOBA, and 38.8% whiff rate. Although the slider lacks a significant amount of movement, Gray’s slider rated as his best pitch with a -13 Run-Value in 2021. That’s Gray’s second-best of his career behind a -20 in 2019. 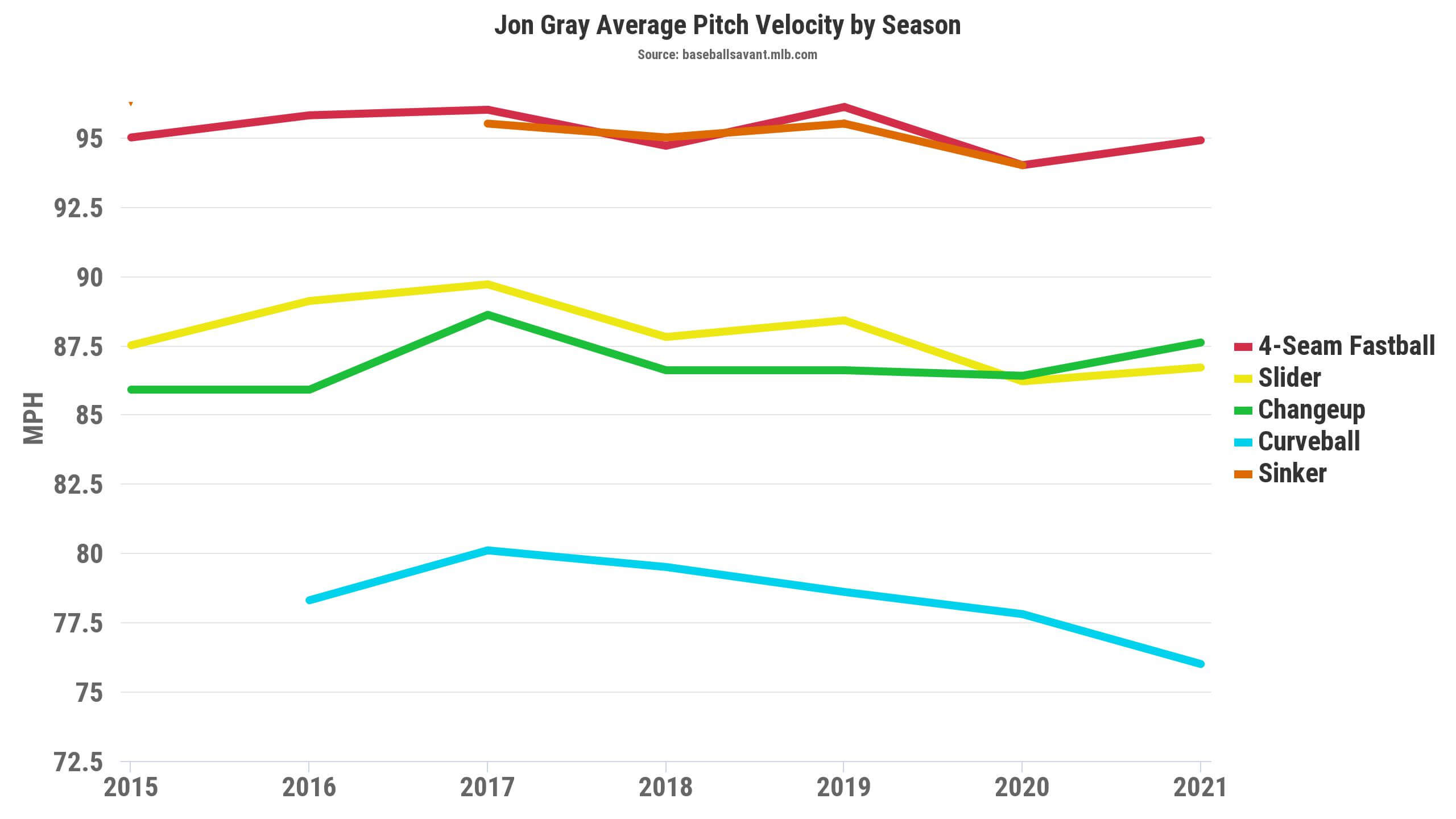 Gray’s fastball velocity went up and down between 94 mph and 96 mph, with an average of 94.9 in 2021. However, as noted earlier, Gray’s fastball velocity ticked up late in the season paired with an improved K-BB%. Gray typically pounded the zone with the four-seamer with a 59.3% Zone%. The four-seamer possessed a ton of horizontal movement with 4.7 inches more than the average pitch. That’s the most movement on the four-seamer in the Statcast era, although it got near in 2020 at 3.6 inches.

From a new home ballpark standpoint, it’s an improvement that he’ll pitch in Texas and several AL West parks compared to Coors Field for half his games. Gray’s skills appear solid enough to warrant yearly sleeper appeal if he moves away from Colorado. The second half improvements for Gray with a 20% K-BB% with the BABIP and LOB% regressing gives us reasons of optimism to buy rather than sell Gray’s outlook for 2022.

Early STEAMER projections have Jon Gray with a 4.31 ERA, 1.32 WHIP, 23% strikeout rate, and 8% walk rate in 178 innings pitched. We’ll note that Gray’s reached a career-high of 172 1/3 innings in 2018 with 150 in 2019 and 149 in 2021. The projected K-BB% looks the same, but the projected .300 BABIP would finish lower than Gray’s career .317 BABIP. It’s safe to assume the BABIP dropping due to the move away from Coors Field. Outside of walks, which rated as 1% higher than the league average in EV Analytics Park Factors, the Rangers home ballpark ranks as average or a few percentages below average in wOBA, home runs, and BABIP.

The early verdict involves us buying into Jon Gray rather than selling in 2022, given the ballpark change, solid skills, and later ADP as a sleeper past pick 250 in late December.

Heading into the 2021 season, Jameson Taillon adjusted his mechanics to having a short arm action in hopes of reducing pressure on Taillon’s elbow. Taillon increased the slider usage in 2019 from 18.4% to 31.9%, then dropped it to 20% in 2021. However, Taillon also used a curveball at 19%, with the four-seamer dominating at 49.3%.

The latest in an ever-growing list of this tweak. pic.twitter.com/yi4rfKA2o0

In Taillon’s first season with the Yankees, he finished with a 4.30 ERA, 1.21 WHIP, 23.2% strikeout rate, and 7.3% walk rate in 144 1/3 innings pitched. Thankfully, Taillon didn’t suffer any arm or shoulder injuries but rather an ankle injury, which required surgery in late October. We note that Taillon dealt with several upper-body injuries throughout his career (shoulder, elbow, and eventually Tommy John surgery). According to Lindsey Adler, Taillon isn’t sure about an injury timeline from the ankle surgery. 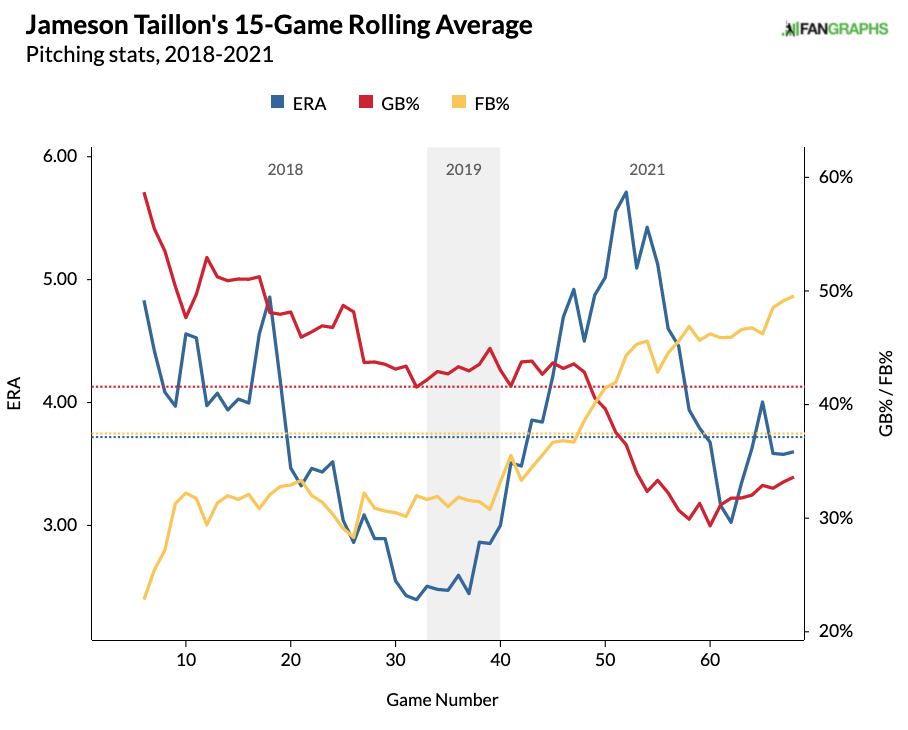 That aligns with the Park Factor expectations since Taillon moved to a ballpark that ranks 5th with a 1.16 Home Run Park Factor per EV Analytics compared to the Pirates ranking second-worst at 0.83. Again, no surprise that Taillon also reduced sinker usage to 5.7% in 2021 when it hovered around 20-21% in 2018 and 2019. Although the sinker elicited a 48.4% ground ball rate, Taillon used the four-seamer to generate fly balls 51.9% of the time.

If Taillon keeps the home runs and BABIP in check, it indicates we should buy rather than sell in 2022. Taillon’s increased flyball rate worries us in a hitter-friendly ballpark with the Yankees having the 5th-highest Home Run Park Factor.

We discussed the pitch mix adjustment for Jameson Taillon earlier, and the chart from Baseball Savant showed that. Once again, we’ll highlight the increased usage of the four-seamer. 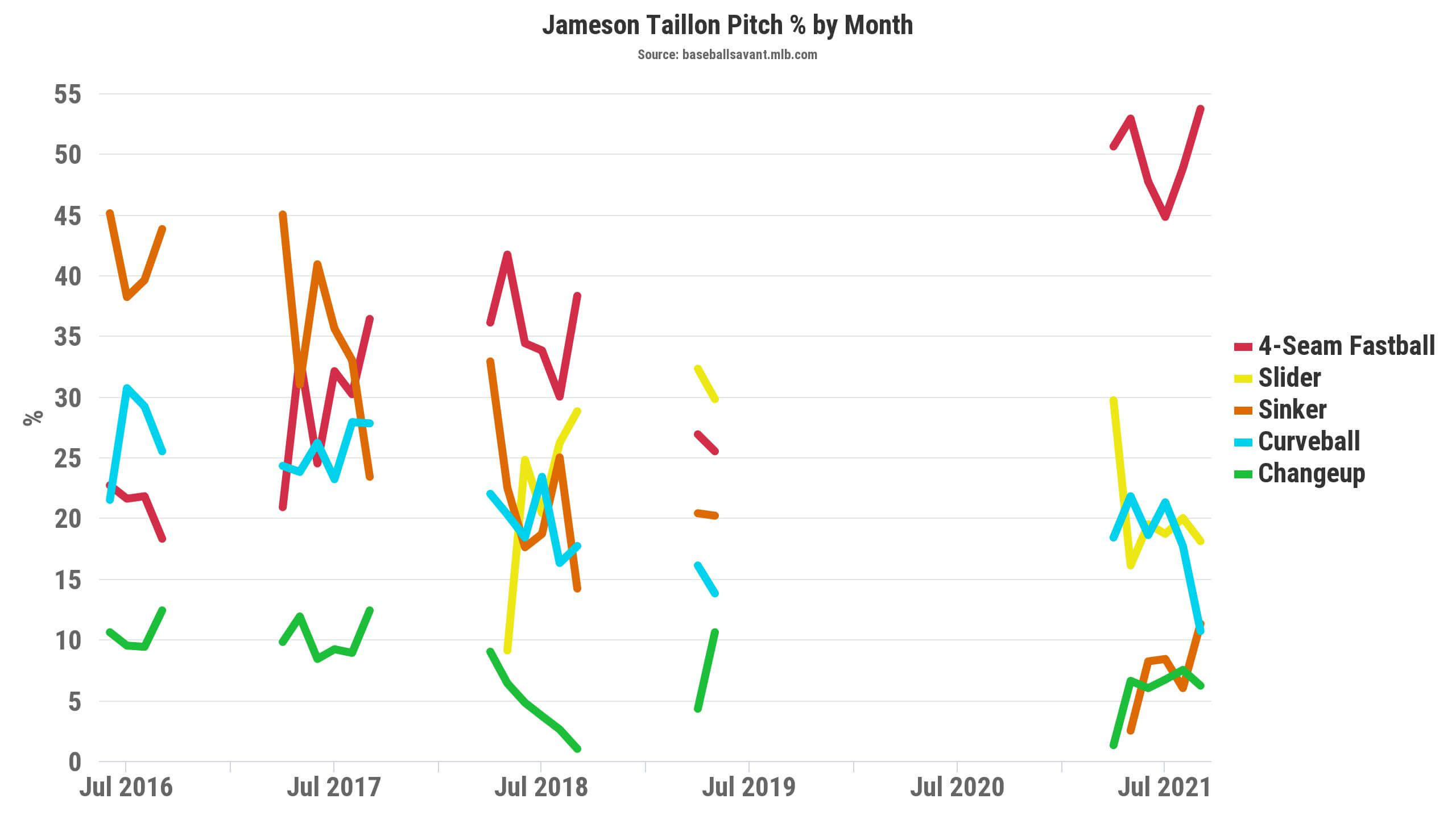 Thankfully, the four-seamer performed relatively well with a .201 BA, .401 SLG, and .286 wOBA allowed. Even from a swing and miss standpoint, Taillon’s four-seamer resulted in a season-best 14.6% swinging-strike rate, yet near the best whiff rate at 28.1%.

Both of Taillon’s breaking pitches elicited a double-digit swinging-strike rate with a whiff rate of 23.4% on the slider and 29.1% for the curveball. From a wOBA allowed perspective, the slider’s .352 and curveball’s .309 aligned with the better whiff rates. 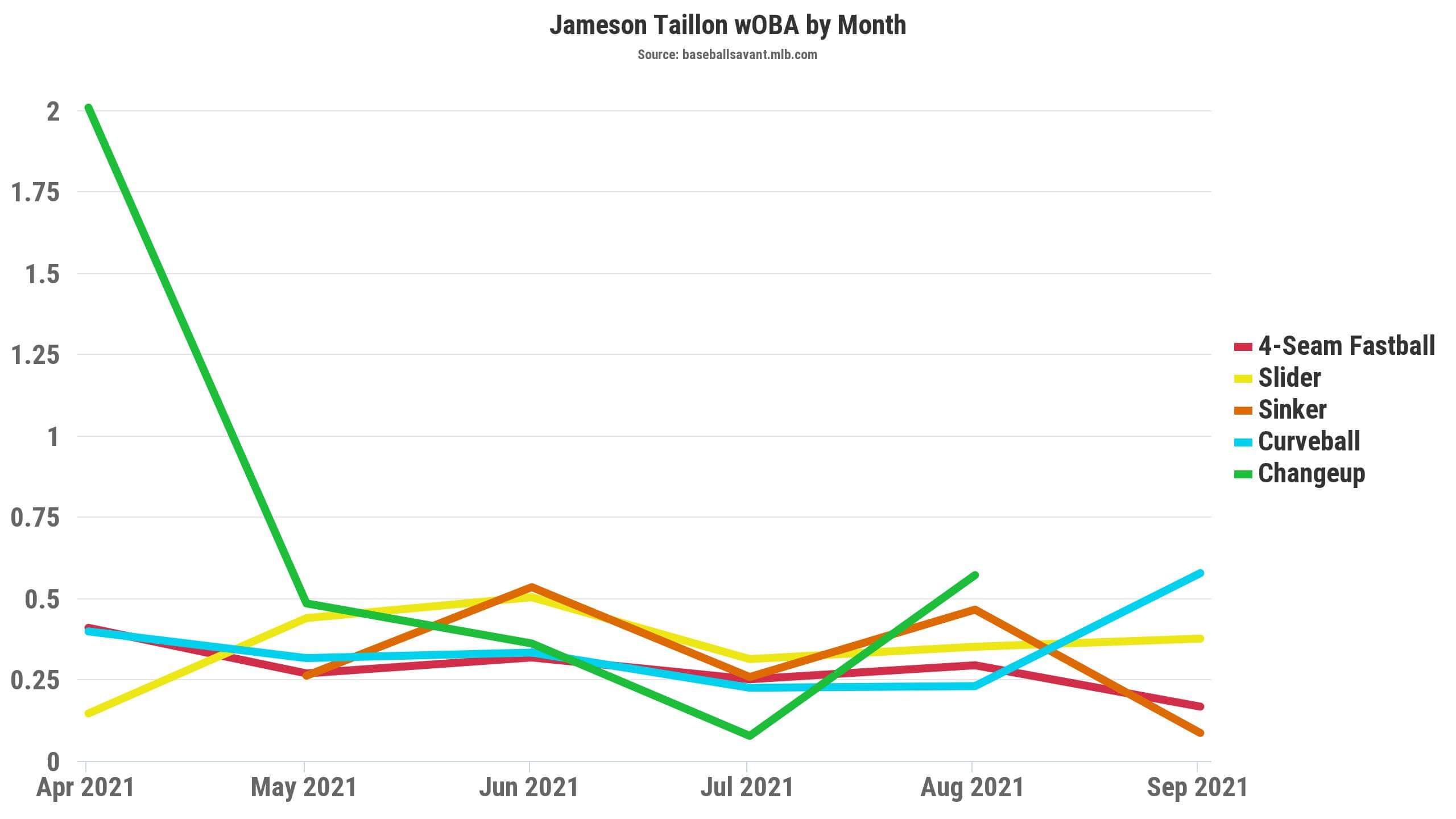 Taillon’s curveball boasts above-average horizontal and vertical movement with a slight velocity difference from 2018 and 2019. In 2021, Taillon’s curveball velocity averaged 80.7 mph compared to 92.2 mph in 2018 and 2019. Although the curveball velocity dropped, it doesn’t appear the movement changed much since it typically possessed above-average drop and break. Interestingly, from a Run-Value standpoint, the curveball rates as Taillon’s worst pitch at +8. Meanwhile, the four-seamer ranks as his best pitch with a -5 Run-Value, according to Baseball Savant. 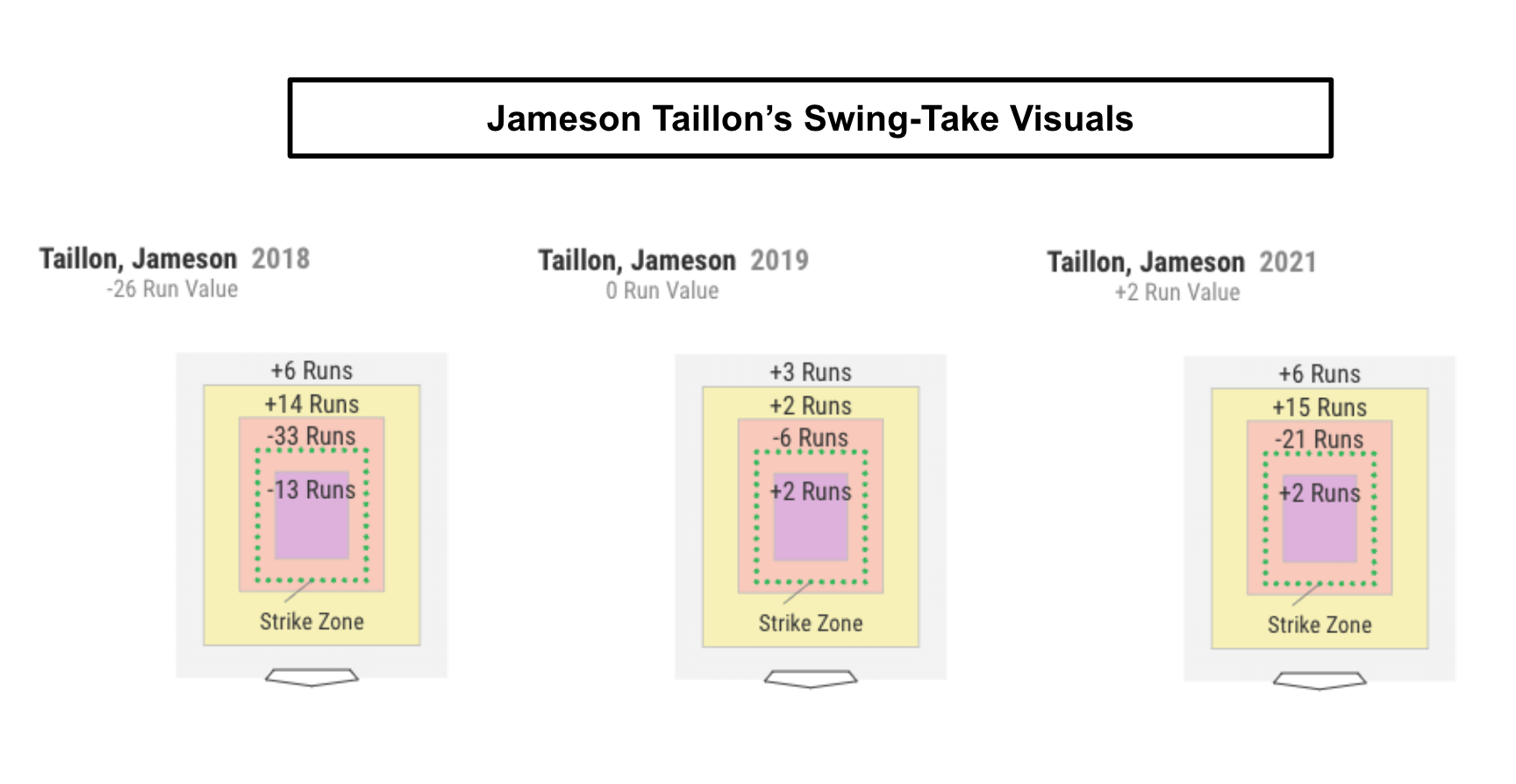 It’s hard to compare previous seasons with Jameson Taillon since he thrived in 2018, then barely pitched in 2019. However, we’ll note the similarities in the shadow areas for Taillon in 2018 and 2021. The main difference involves the struggles in the heart of the zone.

Should We Buy or Sell Taillon?

The early STEAMER projections look fair from an innings pitched and K-BB% standpoint. However, the 4.67 ERA projection looks unsavory with a 1.30 WHIP too. STEAMER projects Taillon to have a 21.9% strikeout rate and a 7% walk rate in 152 innings. Taillon never logged a WHIP higher than 1.21 since 2017 since he typically limited the walks. Assuming Taillon lowers the 2021 walk rate of 7.3% down closer to the career rate of 6.3%, the WHIP could dip.

One other area to note, STEAMER projects Taillon to have a career-worst HR/9 at 1.61 with the BABIP (.292) and LOB% (71.3) not looking too shabby. Initially, I included Jon Gray and Jameson Taillon in the same buy or sell installment, given the early Draft Champions ADP near pick 300. Gray and Taillon once sat closer together, but now Gray extended the gap with a higher ADP. If there’s a choice between Gray or Taillon, then lean Gray. However, don’t sleep on Taillon building upon the late-season success from 2021, yet the ankle injury remains something to monitor.