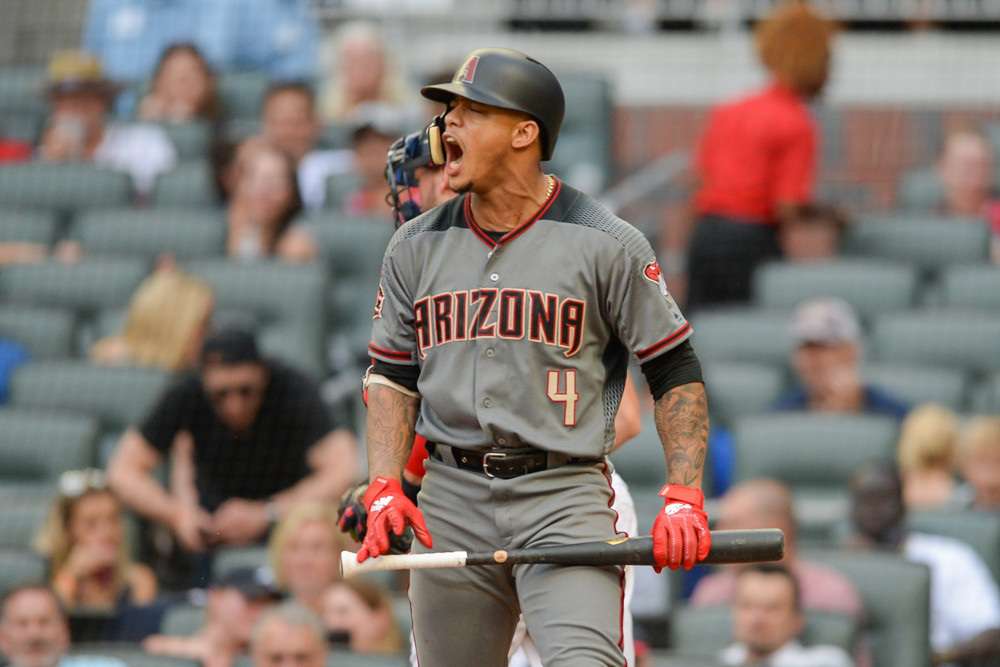 We’re entering the MLB season’s unofficial second half, which means many fantasy leagues are approaching the home stretch. With that in mind, here are two buy-low hitters owned in fewer than 60 percent of leagues who could be interesting additions moving forward.

I wrote about Marte at the very beginning of the season, noting that he was exhibiting surprising raw power combined with strong contact numbers. Both these things remain true and Marte’s stock seems to be on the upswing, despite his mediocre .243/.307/.429 line for the season. Immediately, Marte’s .259 BABIP stands out as ripe for positive regression. He’s got a .299 mark for his career and he’s currently sporting a career-high average exit velocity and hard-hit rate. Players who strike out as rarely as Marte does almost never have true talent batting averages this low and Fangraphs’ Depth Charts forecasts him to hit .273 from here on out.

Marte’s upside goes beyond mere positive regression, though. He’s hitting the ball harder than ever from both sides of the plate while simultaneously making the most contact of his career. Even his plate discipline is better; he’s chasing out of the zone less often than he has in any season since his 2015 cameo and he’s swinging more often at pitches in the strike zone.

So why are Marte’s results not better? A portion of it is luck, but there’s some of his own doing here, too. He’s hitting the ball on the ground more, which offsets some of the other strides he’s made offensively. Still, it’s not hard to project more with Marte. Eno Sarris of the Athletic has found that players with plus bat-to-ball skills and above-average plate discipline are the types most likely to develop in-game power as they age, and Marte’s approaching his power peak at age-24. Further, Marte’s already shown enticing raw power, with a peak exit velocity in the top 30 in baseball. Toss in shortstop eligibility and 8-10 stolen base upside, and Marte looks the part of a well-rounded infield option. I like him most as a target in dynasty leagues based on his continual improvements, but he’s a perfectly fine buy in redraft leagues in anticipation of some batted ball fortune in the future.

Ketel Marte’s performance last night is not to be forgotten. #GenerationDbacks pic.twitter.com/AfVAyFP8eE

Unlike Marte, you won’t project much tool development on Flores. He’s almost 27 years old and has had something like the same season three consecutive years now. He’s probably not adding much power and he’s always been a well below-average runner. On the other hand, he doesn’t really need to develop speed or raw power to be worth an add. He’s getting some extended run now in New York and his projected .269/.315/.460 line plays, even for a corner bat.

Like Marte, there’s some room for positive regression here too, albeit, in a different way. Flores hasn’t really been killed by a low BABIP; yes, his .259 mark is the same as Marte’s, but Flores’ owners shouldn’t anticipate as much of an uptick in his batted ball results. He’s a poor runner with a long track record of hitting fly balls, which isn’t conducive to hitting a bunch of singles. Unlike many players with this profile, though, Flores won’t kill you in the batting average department because he never strikes out. His 88.1% contact rate is well above average and he’s only getting better in this regard. Not only is that the highest contact rate of his career, Flores has the lowest strikeout rate in baseball over the past calendar month (among qualifiers). Strike out this infrequently and you can work around a few pop-ups.

Where the positive regression should come in is in the longball department. Flores saw 13.6 percent of his fly balls clear the fence in 2016 and 2017 alike, yet his HR/FB rate this year sits at only 8.4 percent. This isn’t about his power declining, though; his average exit velocity and expected slugging percentage on fly balls remain in line with their career marks. He’s hitting the ball, for all intents and purposes, the same, yet he’s not getting commensurate results. This is the classic profile of many buy-low hitters, a cheap power add with competent batting averages who should finally get everyday playing time from here out.