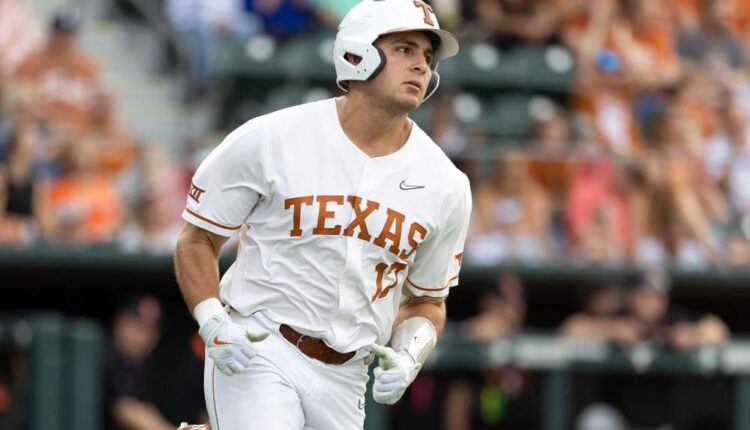 Throughout the entire 2022-23 offseason, Chris Clegg and I are ranking our Top 20 dynasty prospects for each organization. We’ll also be providing our breakout prospects in each division, picking one per team. After covering the NL East and NL Central previously, I’ll be diving into the NL West today.

Selected in the 2nd round of the 2022 draft out of the University of Texas, Ivan Melendez represents one of the more underrated FYPD targets this year. After a solid showing in 2021, Melendez dominated in 2022 to the tune of 50 extra-base hits, 32 home runs, and a .387/.508/.863 slash line in just 67 games. It’s a rare occurrence that I’m able to type out an OBP that starts with a five or a SLG that starts with an eight. On top of all that statistical sexiness, Melendez also walked (52) more than he struck out (51).

Ivan Melendez has done it again.

This fastball was absolutely pulverized into the wind in deep LCF. Massive bat flip. Not much else I can say here. Just enjoy. pic.twitter.com/1MP9tO64Ui

As you could probably tell, power is the name of the game for Melendez. He has your prototypical sluggers frame at 6’3/225 with tree trunks for legs and is able to generate easy raw power thanks to the torque created in his swing. There’s also a nice uppercut swing path due to his slightly lower hand slot during load and through the zone. As he provides no speed and will be limited to 1B/DH, Melendez is going to have to mash to make an impact at this position. But that’s exactly what he has the upside to do. Melendez projects as a 30+ homer bat that could hit around .260-.270 with a high OBP as well.

When you see Yanquiel Fernandez stats from this past season, you’ll probably be pretty impressed. But the really impressive part is that those don’t paint the entire picture. Early in the season, Fernandez struggled. At the end of April, Fernandez was slashing just .229/.317/.371 and was at a slightly better .247/.325/.416 mark at the end of May with only three home runs. Then from June 1st on, Fernandez mashed to the tune of a .309/.356/.551 slash line with 21 doubles, 18 home runs, and a .242 ISO across 382 plate appearances. Yes, the California League is a hitter-friendly league, but those numbers still stand out for that environment, especially when you factor in that Fernandez was just 19 years old.

A big part of Fernandez’s success as the season wore on was the adjustments and improvements he made against secondary offerings. That was something he was struggling with entering 2022 and through the first part of the season. But once he began improving against non-fastballs, that’s when his stock really began taking off. We saw part of that translate into his strikeout rate which dropped from 25% in April/May to 20.7% in June/July to 19.4% in August/September.

With minimal speed upside to speak of, Fernandez is going to have to stand out with the bat. Luckily, his above-average hit tool and potential for plus or better raw power with the aid of Coors Field definitely fit that bill. If he’s able to maintain the strides he made throughout the 2022 season and carry that momentum into 2023, Fernandez has a real shot to jump well inside Top 100 prospect lists.

While I’m high on all five of these names in this article, Josue De Paula might be the most exciting from a fantasy standpoint. After signing for $500K last winter, Josue De Paula immediately began flexing his offensive potential in the Dominican Summer League this past summer. In 223 plate appearances, De Paula slashed a robust .350/.448/.522 with 13 doubles, five home runs, 16 steals, and more walks (32) than strikeouts (31). You always need to take DSL numbers with a grain of salt, but one area that can tell you a lot about a prospect right away is their BB% and K%, both of which look very good so far for De Paula.

Outside of that, De Paula brings plenty of athleticism, natural strength, and frame projection to the table while already showing a good feel for hitting. He’s currently listed at 6’3/185, which looks fairly accurate on video, and there’s a fair amount of room to add good bulk to that frame. If he does, a bit of speed will likely go by the wayside, but plus power and average to above-average speed is definitely within the realm of possibilities here. Plus, De Paula is in one of the best organizations in baseball for player development. Go get this guy now.

This San Diego Padres system lacks it’s usual endless amount of potential breakout prospects right now, but one that fits the mold is outfielder Samuel Zavala. Signed for $1.2M back in January 2021, has put together two productive seasons in 2021 and 2022, even making it up to Lo-A just a few weeks after turning 18. Overall, Zavala had eight home runs and five steals in 43 games this past season with a .272/.366/.530 slash line. He displayed an impressive blend of patience and power, posting a .258 ISO and a 13.1% walk rate. Although, he did strike out 27.3% of the time as well.

2021 international signee Samuel Zavala OF @Padres SMOKES his first state side hit, an almost HR to dead center which turns into a 2RBI double. Stays back and shows easy power. One of the louder hits I've hears here in Complex as of recent. #ProspectOne (sound up) pic.twitter.com/d4SOT4uLwo

With Zavala, he projects more as a corner outfielder, but he has the bat and overall offensive upside to fit in at that spot. He’s shown a good feel for barreling pitches up already, and evaluators that have seen him live seem to all have been fairly impressed. I’m also bullish on his power projection as well, possibly winding up as a 20-25 homer bat to pair with a solid AVG and OBP. I’m not sure how much speed he’ll provide, but 5-8 is possible. Overall, there’s a lot to like in Zavala’s profile and his performance to date. He could easily sneak into Top 100 lists by the end of 2023.

Another one to keep an eye on in deeper dynasty leagues is Daniel Montesino. He missed the entire 2022 season due to injury, but he performed well in 2021 and has the power to break out. Plus, he’s either dirt cheap, free, or available on your waiver wire depending on your league depth.

There’s a lot of intrigue, excitement, and mystery surrounding Reggie Crawford right now. Despite missing the entire 2022 collegiate season recovering from Tommy John surgery, the Giants still took a chance on Crawford with their first-round pick (30th overall). And when you look at the profile, it’s not overly difficult to see why.

To start, Crawford was a two-way player at UCONN who showed exciting potential both as a pitcher and a hitter. As a hitter, Crawford slashed .295/.349/.543 with 11 doubles and 13 home runs in 51 games back in 2021. Evaluators have lauded his power potential from the left side of the plate as well and he certainly looks the part of a masher at 6’4/235.

Reggie Crawford (@BourneBraves) topping out at 101 MPH yesterday, after going 2-5 at the plate in the same game 😳

However, Crawford possesses even more upside on the mound. But here’s where the intrigue and mystery come into play I mentioned above. Crawford’s high-spin fastball will sit in the mid to upper 90’s with great life and has touched triple-digits at times. He also mixes in a mid to upper-80’s slider with plenty of two-plane break. But with all that said, Crawford only pitched a grand total of eight innings in college and has yet to establish a consistent third offering.

There’s no denying that Crawford has plenty of upside all around, but the unknowns are prominent at the moment. He was able to get back into game action as a hitter late in the season which is encouraging. Hopefully, he’ll be 100% ready to step back on the mound in 2023 and start accruing those innings that he desperately needs. As a fairly cheap price both in FYPDs and overall, targeting Crawford right now in dynasty leagues is a smart decision.

Okay, I wasn’t planning on doing this when I started this article, but I just wanted to briefly mention Grant McCray. One could say he already broke out and rose up rankings in 2022, which he certainly did. But I believe he’s still a bit undervalued and has the potential to continue rising up rankings in a big way in 2023.

As a 21-year-old in Lo-A and Hi-A, McCray racked up 55 extra-base hits, 23 home runs, and 43 steals with a .289/.383/.514 slash line. Sure, maybe he was a tad old for the level, but 21 in Single-A isn’t that old. Plus, McCray possesses legit above-average power and plus speed as well. The one thing that he’ll need to improve as he gets up to Double-A sometime in 2023 is the strikeout rate which sat at 29.9% in 2022. Luckily, he also walked at an 11.8% clip. If McCray can limit the strikeouts a bit better, another big season should be on the horizon in 2023 with another subsequent rankings jump.