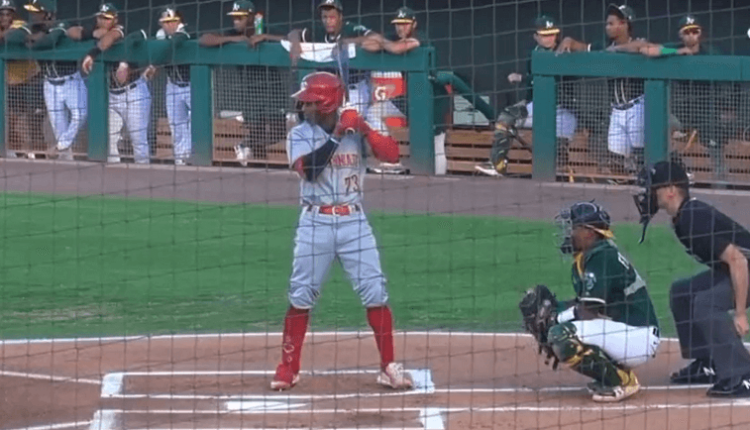 Throughout the entire 2022-23 offseason, Chris Clegg and I are ranking our Top 20 dynasty prospects for each organization. We’ll also be providing our breakout prospects in each division, picking one per team. After covering the NL East previously, I’ll be diving into the NL Central today.

I’ll admit, I was a bit skeptical when the Cubs took Cade Horton in the top 10 this past summer, but the breakout appeal is definitely there. First and foremost, Horton just doesn’t have a lot of innings on his arm over the last few years thanks to needing Tommy John surgery in 2021. That forced him to miss the entire 2021 season and the beginning of the 2022 season. And once he came back, most of his 2022 collegiate season at Oklahoma was him simply trying to shake the rust off and get into a groove. That groove was found near the end of the season and into Oklahoma’s College World series run. Without Horton, Oklahoma definitely wouldn’t have made it all the way to the championship where they lost to Ole Miss.

Segment today on Cade Horton (as I promised, his slider grip is above). pic.twitter.com/FlmHGL2saB

Horton is listed at 6’2/190, but the frame is solid and has a bit of projection remaining. He’s at his best when he’s locating his low to mid-90’s fastball and getting hitters to chase his power slider out of the zone. The slider is already a plus pitch and Horton’s four-seamer could be as well.

What also impressed me with Horton in 2022 was the fact that he was able to post a low 6.4% walk rate after such a long layoff. If he’s able to maintain his command and control and continue missing bats with that slider, Horton could wind up as an arm that eclipses a 20% K-BB rate moving forward.

I’m all in on Carlos Jorge right now in dynasty leagues. There were seven prospects (min 150 PA) this past season to post both a walk rate above 15% and an ISO above .250. Out of those seven, five were in the DSL and only two played above the DSL. One of the two was Minnesota outfield prospect Emmanual Rodriguez who many consider to be a top 100 or even top 50 fantasy prospect already. The other? Carlos Jorge.

Carlos Jorge may only be 5-10, 160lb. but this could be the most effortless HR I’ve seen this year in the minors.

The 18-year-old just flicks this hanging CB down the RF line for his 5th of the year. #Reds #ATOBTTR pic.twitter.com/m3EmZxOlrK

After an impressive showing in the DSL in 2021, Cincinnati bumped Jorge to their ACL affiliate this past season where he slashed .261/.405/.529 with seven home runs in 154 PA and 27 steals for the second consecutive season. Evaluators that have seen him have been impressed by his hit tool and speed, with both grading as future 55 or 60 grades. However, it’s the power that has lagged behind a bit. And while Jorge will never be a masher, I definitely believe there’s a path to a 15-20 homer player here. Jorge still has some projection on his frame and will also get to call Great American ballpark home one day if he’s not traded first.

Overall, Jorge’s offensive profile from the second base position is very exciting and makes him worthy of top 100 overall consideration in prospect rankings. But luckily for you, the price to acquire him will be much more reasonable.

When it comes to fantasy ceilings, Tyler Black probably has the lowest one among this group. That’s not to say that Black lacks upside, but it’s more of a safety thing with him in dynasty leagues. Selected 33rd overall in the 2021 draft, Black’s hit tool and approach stand out within his offensive profile and both were on full display this past season. In 64 games at Hi-A Wisconsin, Black hit .281 with a .406 OBP, 15.9% walk rate, and a 15.5% strikeout rate. This just one year after finishing his collegiate career with a .383/.496/.683 line with 39 walks to just 25 strikeouts.

Outside of the hit tool and approach, the intrigue dies down a tad, but Black has enough power and speed to get into the 15/15 range annually. That’s not going to charm the pants off of anyone, but a .280+/.370+/15/15 profile definitely has value in our fantasy world. If you’re looking for an MLB comp, the closest I’ve thought of is Nico Hoerner with a little more power/OBP and a little less speed.

The moral of the story here is don’t avoid the high floor types when looking for prospects that could rise up prospect rankings. These are the guys that often get overlooked and undervalued.

There were no names that stood out more than others when it came to breakout prospects in this system, so I’m going to go with the upside play in Lonnie White Jr. Unfortunately, we’ve only seen White for a grand total of a whopping 40 plate appearances since being drafted in 2021, with hamstring and UCL injuries limiting him to only two games in 2022. White was already considered more raw than his peers due to being a three-sport star in high school, so now he has even more catching up to do in terms of development.

But with all that said, the upside here is massive if everything clicks. It kind of has to be for me to include him in an article like this given all that was mentioned in the above paragraph. White is an elite athlete with double-plus speed, plenty of natural strength, and more projection remaining on his 6’3 frame. Even in those 40 plate appearances, White already racked up three doubles and three home runs, albeit, with a 2/17 BB/K ratio.

Let’s keep our fingers crossed and hope White can get through the 2023 season healthy so he can get those precious plate appearances that his development desperately needs. Due to the missed time and the risk baked into the profile, White has fallen hard down prospect rankings to the point where there’s minimal risk and price associated with acquiring him. This level of upside is worth rolling the dice on given the low price right now. If it doesn’t work out, you didn’t spend much to get him. But if White enjoys a healthy 2023 and starts building on all of that upside and promise, your ROI could be huge.

Signed out of the Dominican Republic last offseason, Jonathan Mejia is a switch-hitting shortstop with an exciting all-around blend of offensive tools. It’s damn near impossible to grade a hit tool before seeing him in game action, but many evaluators that saw him last year believed in Mejia bat developing nicely in both the hit tool and power departments.

Longterm, Mejia doesn’t project to provide a ton of speed (maybe 5-8 SB annually) as he fills out his frame, but we could be looking at an above-average hitter with above-average or better power that has a chance to stick at the shortstop position longterm. He’s already creeping closer to my Top 200 overall and could flirt with Top 100 status in 2023.