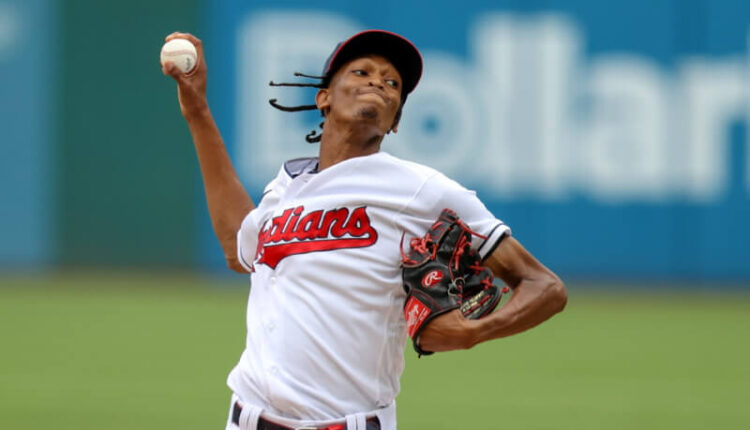 The wild part of fantasy baseball involves the massive player pool compared to fantasy football. Even when we spend hours and hours on a dozen players, we still could research even more. That’s the case with these breakout pitchers and our arbitrary Freddy Peralta threshold. Last week, we discussed three more breakout pitchers that fit the Peralta mold in part two. The week prior, we brought part one. Let’s dive into two more breakout pitcher candidates, plus a deep-league pick to monitor.

With that overview of Freddy Peralta from 2018-2020, what’s the threshold for finding possible breakout pitchers? Keep in mind that some of these thresholds feel a bit arbitrary. However, we’re looking for a pitcher who appeared as a starter and reliever. Some other standards include a higher strikeout rate, an underwhelming ERA, and at least one quality pitch or maybe two.

A couple of other ADP benchmarks includes finding a pitcher after 200. For reference, the 2021 Main Event ADP for Peralta sat at 186, with an overall NFBC ADP at 289. In my TGFBI league, I drafted Peralta in round 23 at pick 340. So that gives us a wide range of pitchers to consider, although we might dig a little deeper into the player pool.

That said, let’s dive into three more potential breakout pitchers for 2022. We’ll probably have a third installment of the breakout pitchers next week. If you have any suggestions, feel free to comment or message me.

In 2021, Tony Gonsolin had an ADP around pick 250. Unfortunately, Gonsolin hit the injured list with right shoulder inflammation on April 4. Since the Dodgers placed him on the 60-day injured list, Gonsolin missed two months and returned in early June. He pitched in two outings, then dealt with shoulder soreness again on June 20.

Although Gonsolin didn’t miss time shortly afterward, he likely reaggravated the shoulder issue because he landed on the injured list on July 31. Gonsolin missed over a month, then closed the year with five appearances. Before we look at the numbers, it’s safe to say Gonsolin’s 2021 suffered due to injuries.

Tony Gonsolin utilized 3 pitches at a double-digit rate with the 4-seamer, slider, & splitter.

Given the shoulder injury, it’s understandable that Gonsolin struggled with control in 2021. As a flyball pitcher (45.3%), it makes sense to see Gonsolin’s BABIP remain lower. Thankfully, Gonsolin limits the home runs with a career of 8.8% HR/FB% and 0.89 HR/9. That’s consistent with Gonsolin’s minor league track record, evidenced by a 0.70 HR/9 in 283 innings from 2016-2021.

Credit to buddy Dave Swan (@davithius) again for discussing another potential breakout pitcher. Since I’m dabbling in fantasy baseball and football, I labeled Gonsolin as an injury risk without considering the 2022 ADP. Based on early Draft Champions ADP, Gonsolin sits outside the top 300 picks near pitchers like Cristian Javier, Jameson Taillon, and Eric Lauer. 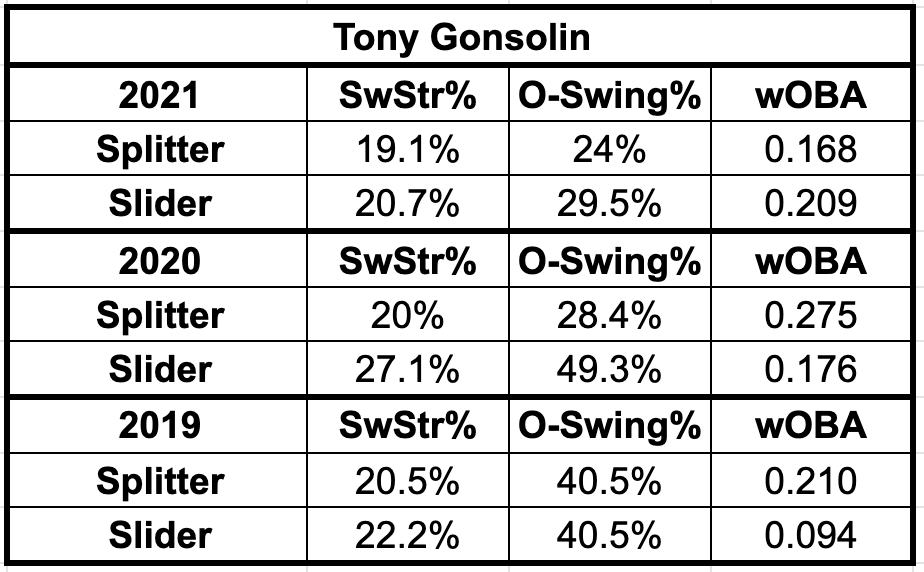 In Tony Gonsolin’s career, he utilized three pitches at a double-digit rate with the four-seamer, slider, and splitter. Gonsolin’s slider and splitter boasted swinging-strike rates near 20% over his career, with a splitter at 19.8% and a slider at 22.6%. In 2021, the wOBA allowed looked silly, evidenced by a .209 wOBA versus the slider and .168 on the splitter. 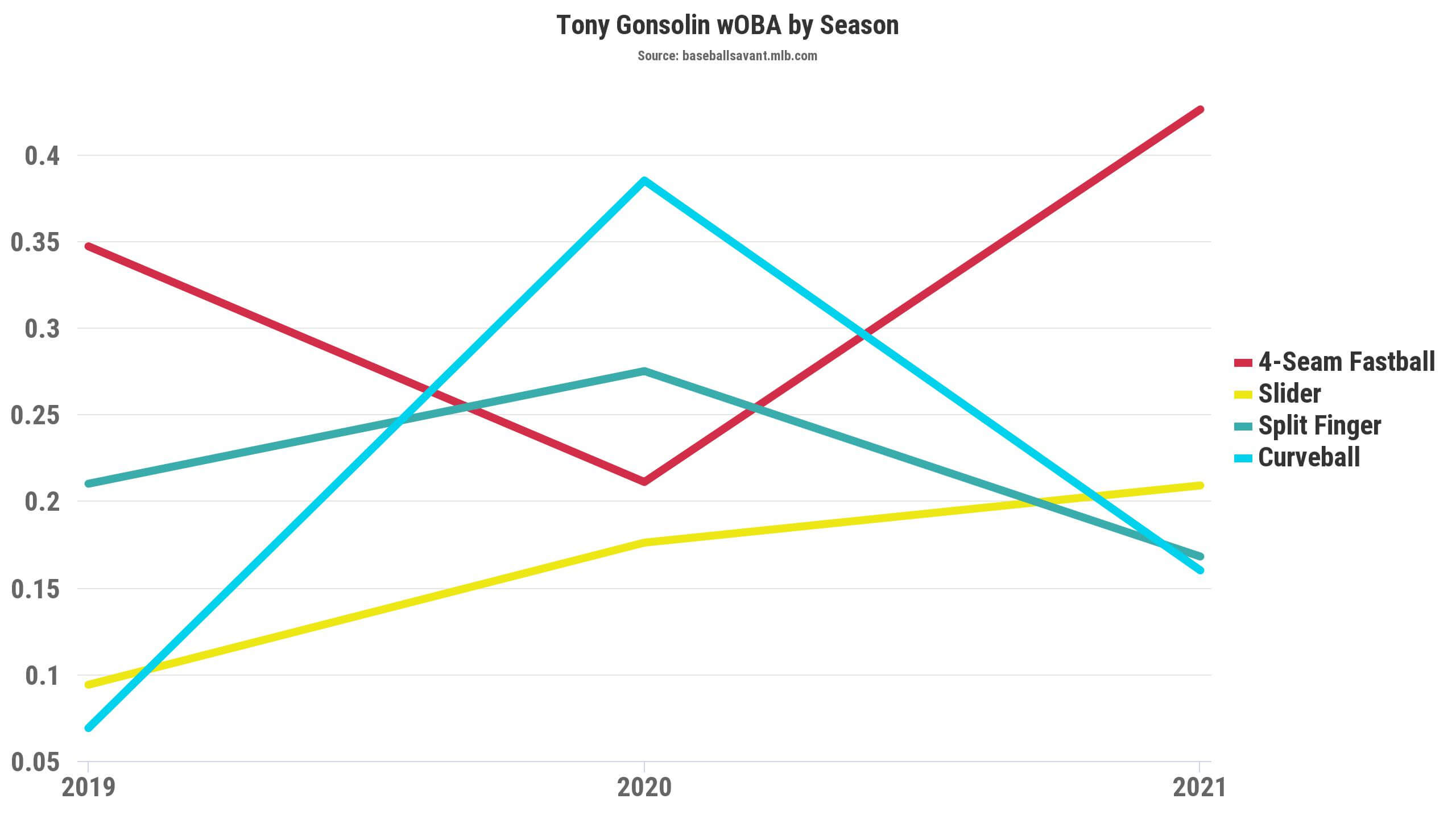 Gonsolin’s four-seamer typically possessed above-average vertical movement ranging from 1.1 to 2 inches more than the average four-seamer. It may be due to the shoulder injury in 2021, but Gonsolin’s splitter dipped in the horizontal movement from over 3 inches above average (2019-2020) to 1.1 in 2021. Sometimes pitchers struggle to command splitters, but his pitch gets a ton of arm-side fade that he uses against lefties.

From a Run-Value standpoint, Tony Gonsolin’s 2019 and 2020 metrics looked identical. However, the 2021 numbers looked a bit different. Again, insert a sample size alert. Gonsolin didn’t thrive as much in the shadow area in 2021 but performed better in the heart. It appears opposing hitters swung less at his pitches in the zone (74%) in 2021 compared to 79% in 2020 and 77% in 2019. Once again, we could chalk this up to the shoulder injury, meaning control and command issues.

The top fantasy baseball players preach risk assessment and when to take calculated risks. That includes avoiding injured players with an earlier ADP. However, Tony Gonsolin’s ADP past pick 300 means he lands as a draft target around round 20. Sure, it’s worrisome that Gonsolin only threw four innings in three relief appearances in the postseason, plus finishing with a second stint in the IL due to the shoulder injury.

ATC also posted their projections that look better with a 4.23 ERA, 1.32 WHIP, 22.5% strikeout rate, and 9.5% walk rate in 116 innings. The same trend of BABIP and LOB% regressing as expected, but STEAMER and ATC project the home rate to boom to 1.64 (STEAMER) and 1.45 (ATC). That said, it presents a buying opportunity to target Gonsolin as one of the breakout pitchers, especially if we receive positive reports in the coming weeks and months. Gonsolin’s stuff is good, so buy into the skills when healthy.

In fantasy football, there’s an ongoing conversation about size and speed. Meanwhile, baseball includes various athletes of all sizes. Triston McKenzie of Cleveland sits at 6-foot-5 and a light 165-pounds. Once we move past the size, McKenzie possesses an intriguing profile. We know McKenzie struggled with back, forearm, and shoulder injuries that all interconnect. However, in 2021, McKenzie threw 120 innings – the second most throughout his entire pro career. 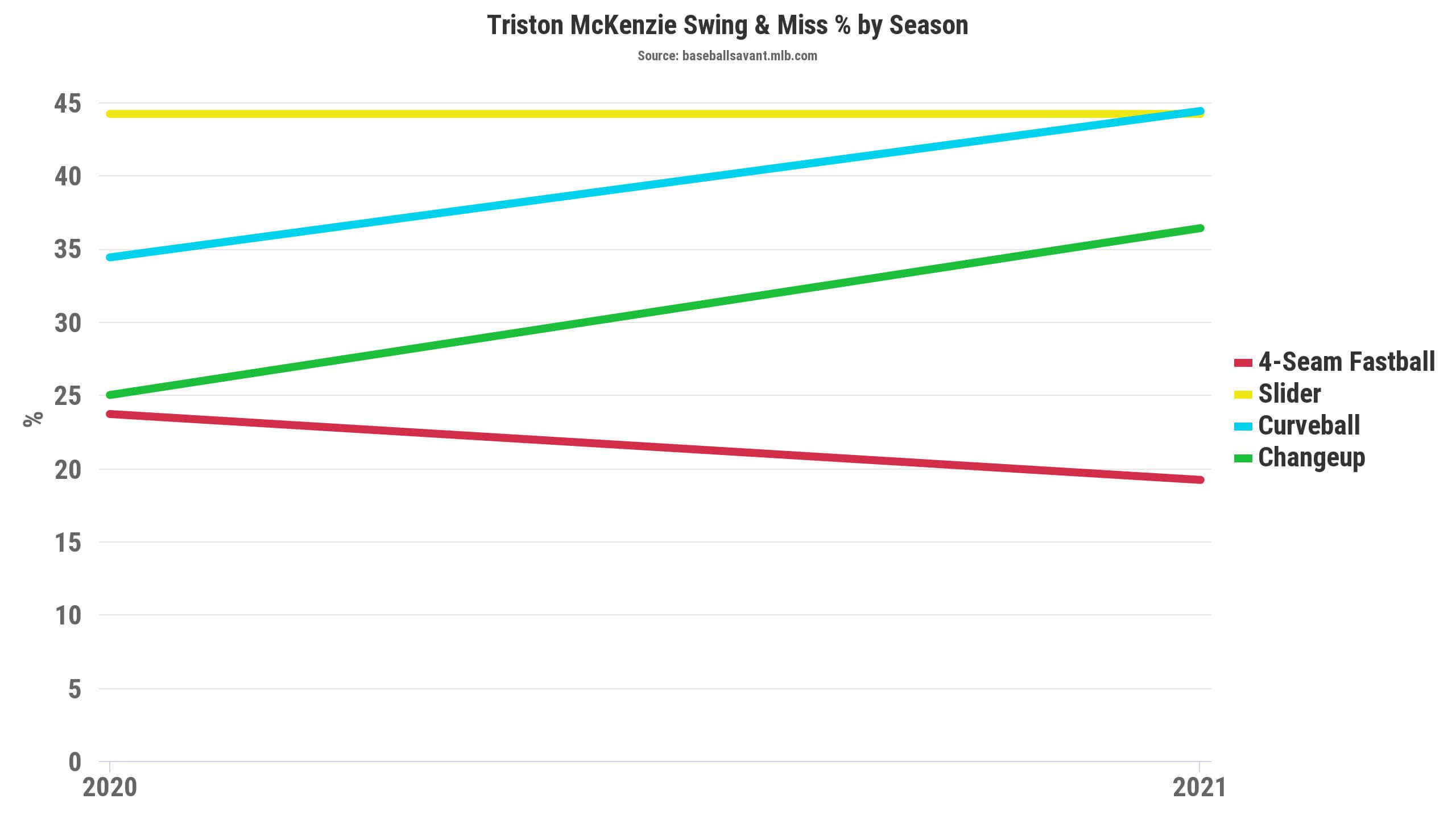 McKenzie’s vertical movement remained above average in 2020 and 2021, ranging from 2.5 to 3 inches more than the average four-seamer. Although the breaking pitches don’t stand out movement-wise, McKenzie uses them as weapons for whiffs. 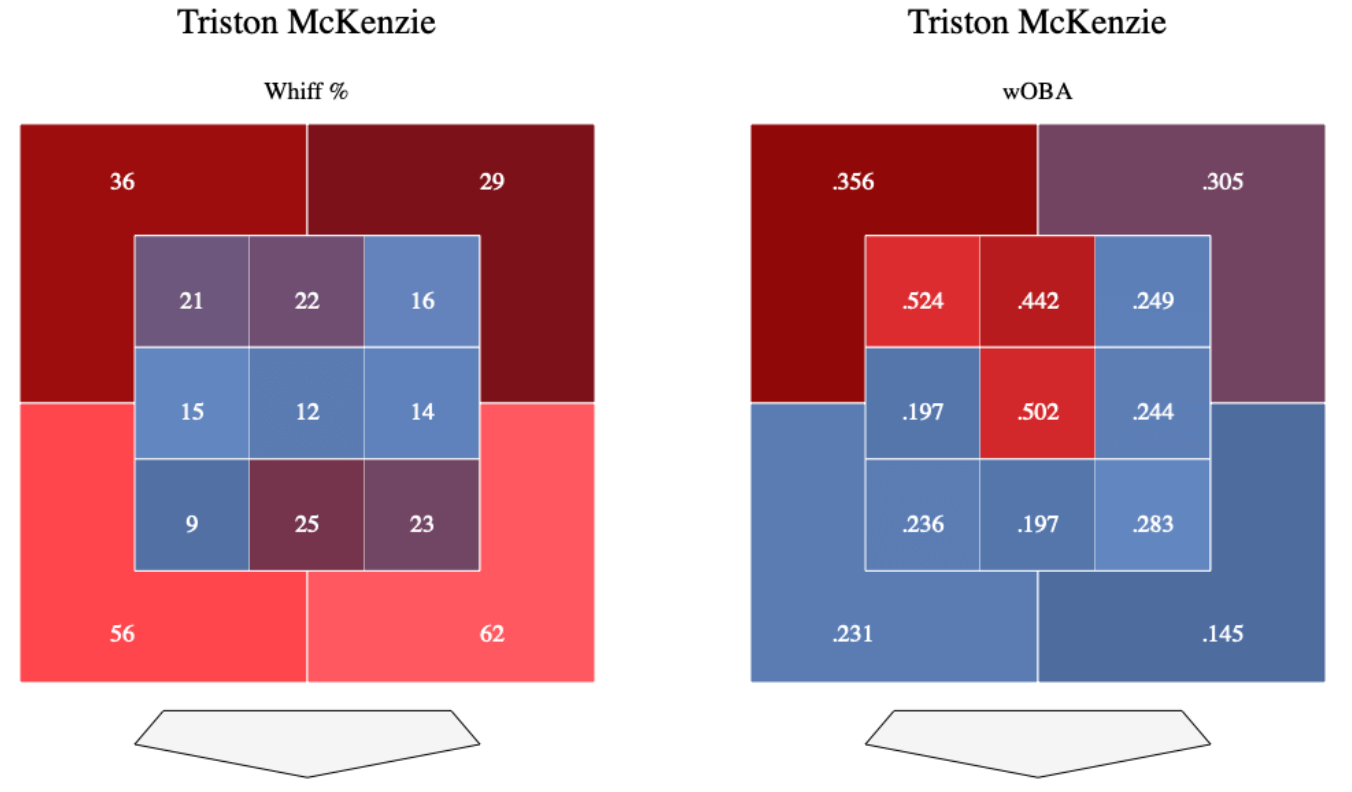 Another area to monitor with Triston McKenzie involves the fastball velocity, which averaged 91.4 mph from April to June, then increased to 92.7 mph from July to October. 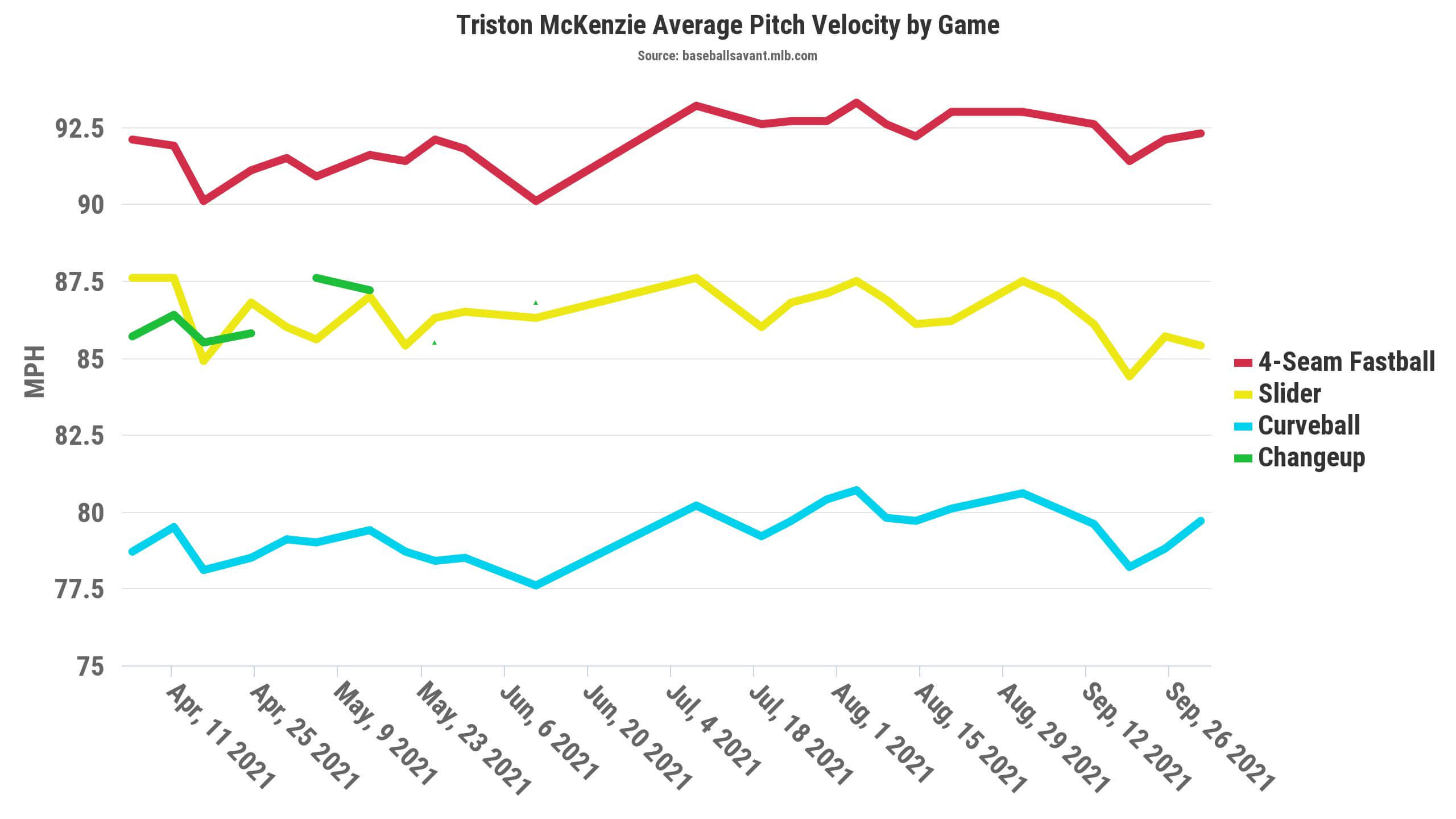 Granted, it’s a small sample, but McKenzie performed better in WHIP and K-BB%, plus a slight pitch mix adjustment from July and beyond with the increased four-seam velocity. Although the 31.2% strikeout rate remained higher than the 25.2% in the latter half, the 20.6% walk rate from April to June can’t fly.

Outside of total innings, McKenzie went six or more innings in nine of his 14 appearances (64.3%) compared to zero times in ten games to begin. Unsurprisingly, all nine of those appearances ended as quality starts, eight of which he allowed two or fewer runs.

We find several starting pitchers past pick 200 that possess upside, including Anthony DeSclafani, Jordan Montgomery, Triston McKenzie, John Means, Patrick Sandoval, and Alex Cobb. McKenzie might sit at the end of that tier since we’ve seen less of a track record there with the injury history too.

The projection systems don’t have the same level of optimism as me, evidenced by THE BAT expecting a 4.63 ERA, ATC with 4.51, and STEAMER at 4.59. That aligns with the ERA estimators from 2021 with a 4.70 FIP, 4.53 xFIP, and 4.36 SIERA. Although the BABIP remained low and could regress, he rocks a flyball-heavy profile that could warrant keeping the BABIP low.

Overall, we love the skills for McKenzie, with the two breaking pitches boasting a near 19% swinging-strike rate, plus the fastball that could improve. Cleveland helps develop pitchers in Shane Bieber, Zach Plesac, and Aaron Civale. McKenzie arguably has nastier breaking pitches than the other three. 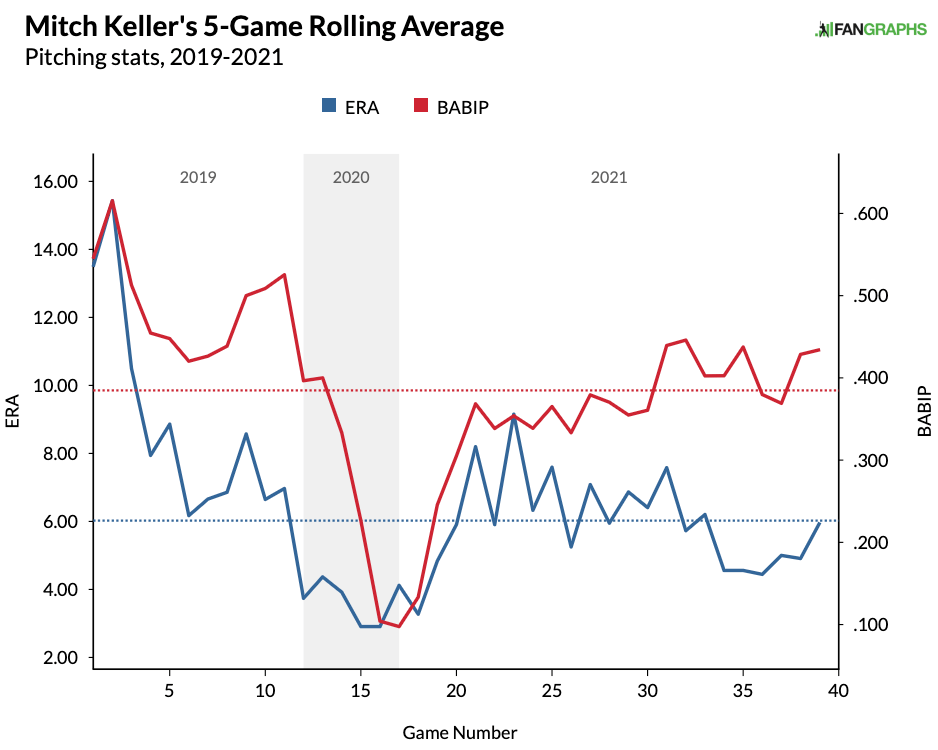 In Mitch Keller’s short MLB career, he relied on three pitches – the four-seamer, plus two breaking pitches in the curve and slider. Unfortunately, Keller’s arsenal hasn’t looked great so far. Keller’s slider consistently elicited a high swinging-strike rate at 15.2% in 2021, with a career rate of 17.6%. In terms of wOBA allowed, the slider finished with a .322 wOBA – much lower than any other pitch. 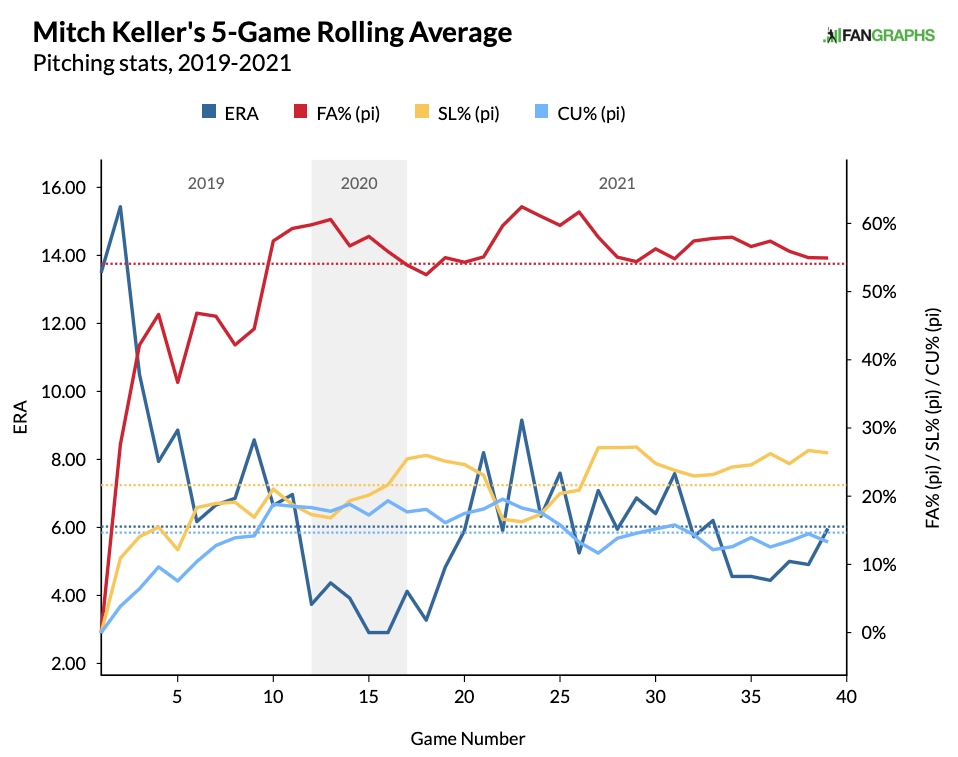 However, the slider allowed a .229 batting average, .289 wOBA, 5% barrel rate, and 45.4% GB% throughout his career. Sure, we’re pulling at straws, but Keller falls in the super deep league or waiver-wire breakout pitcher status. Maybe, just maybe, Keller adjusts the slider usage in 2022. 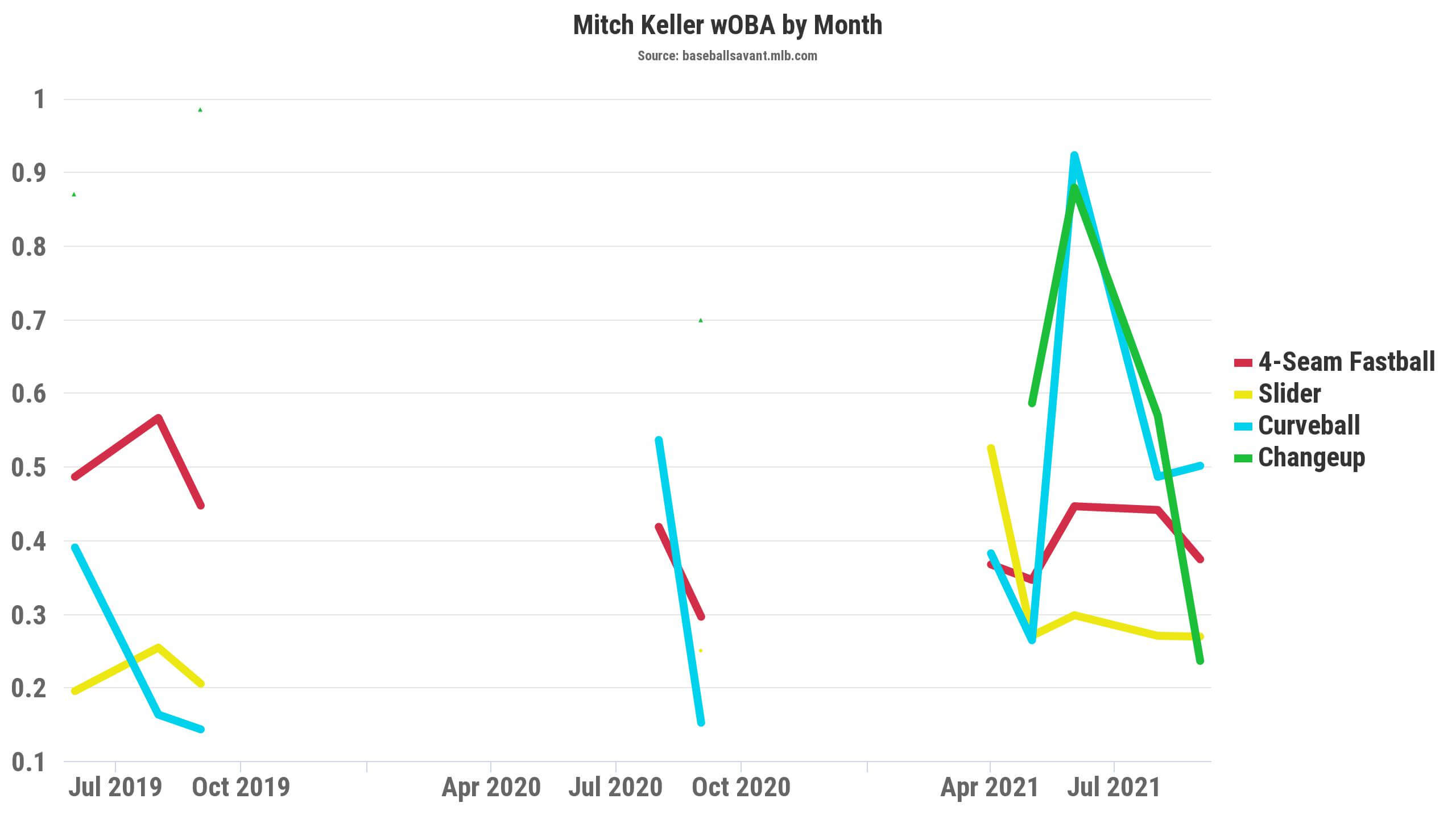 Keller relies heavily on the four-seamer 56.7% of the time, with the slider at 24% and the curveball at 14.5%. It appears Keller could benefit from a pitch mix change, but the rest of them haven’t performed well. Keller’s four-seamer allowed a .385 wOBA, plus the curve at .457 and changeup at .431. The one positive to latch onto involves the vertical movement on the slider and curveball rating above average. That said, there’s a chance the slider improves from a whiff standpoint, but the optimism remains low outside of positive regression incoming.

Outside of a draft-and-hold type league, Mitch Keller isn’t someone to draft with an ADP around pick 580, according to Draft Champions ADP. From 2014-2021 in the minor leagues, Keller boasted a 25.7% strikeout rate, 7.8% walk rate, and 1.17 WHIP in 567 1/3 innings pitched. Granted, the MiLB park context matters, but Keller typically limited home runs with a 0.52 HR/9. 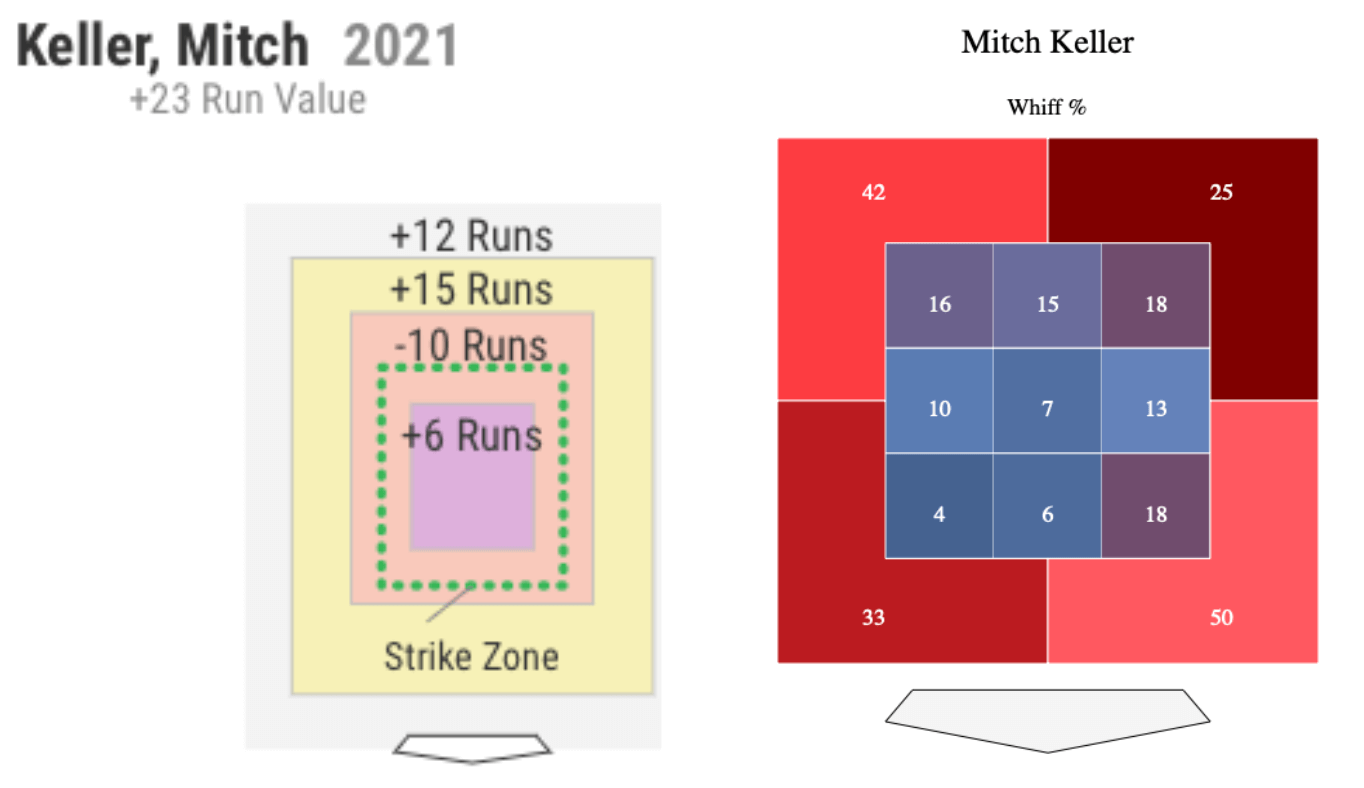 However, Keller still needs improvements in the heart and edges of the zone. On the flip side, Keller’s control fell off the rails with the double-digit walk rate. Leave Keller on the waiver wire, but monitor a possible pitch mix change, the K-BB% improving closer to the minors, and regression in BABIP and LOB%. Regardless, it’s a low likelihood that Keller lands as a breakout pitcher, but someone to watch.

We could go on and on, but we already wrote up some breakout pitchers. That includes Josiah Gray, Luis Patiño, and Cristian Javier (to a lesser extent). You can find those writeups for breakout pitchers on Gray and Javier here, then Patiño and Jesús Luzardo here.

Other wild cards to consider Reynaldo López, Carlos Hernández, and Tarik Skubal, but the latter has a higher ADP. I still have a long list of breakout pitchers that I’ll probably write up another time.