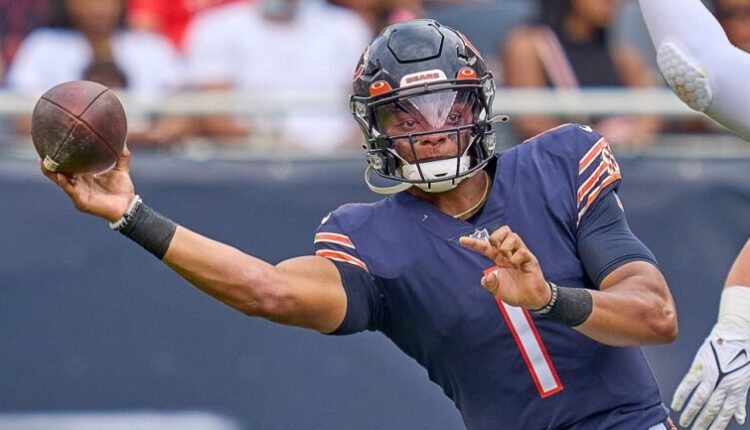 I’ll start by saying “bravo” to Fantrax’s own, Ahaan Rungta, who was absolutely on the money with his Week 2 bold prediction. Ahaan stated his case last week for a six-reception, 100-yard, and two-touchdown performance from wide receiver, Mike Evans. In case you missed it, Evans hauled in five catches for 75 yards…and two touchdowns!

As for the rest of the staff, some things just didn’t quite pan out as accurately as Ahaan’s, but hey, that’s why these predictions are bold and the best part is, we’re back for more!

Week 2 was tough. Didn’t it feel like every five minutes there was yet another update of a player going down with some sort of injury? Luckily as this week has progressed, we’ve gotten some clarity as to how those players are fairing and, of course, wish a speedy recovery to all who need it. Hopefully, your fantasy football team weathered said injury storm.

So, here we are setting our Week 3 lineups which, in light of the large handful of less than healthy players, becomes that much more complicated. That means we all may need to make a few bold predictions to lock up that ever-important win.

Colin’s Breakdown: I know this is back-to-back weeks of bold predictions for Kenny Golladay. Not to mention, this is just one reception shy of Mike Omelan’s exact prediction from Week 2. Hear me out, though.

Golladay isn’t living up to the expectations just yet of $72 million wide receiver. However, he’s still been on the field for 85% and 84% of the Giants’ snaps through the first two weeks. More importantly, his target share from Week 1 to Week 2 increased from 16% to 25% with six and eight targets, respectively.

Golladay now faces off against an Atlanta Falcons defense that just allowed five touchdown passes to the Tampa Bay Buccaneers, two of which went to big-body receiver, Mike Evans, who saw 25% of his team’s target share in the process. Not only does Golladay have more rest and practice time between last week and Sunday, but his obvious frustration on the sideline on Thursday Night Football perhaps feeds into the narrative of “squeaky wheel gets the grease.” Week 3 is the time to cash in on Kenny’s overdue breakout in New York.

Mike’s Breakdown: After just one catch last weekend against the Denver Broncos, it’s time for DJ Chark to get back on track against the Arizona Cardinals this Sunday. In Week 1, Chark saw 24% of the Jaguars’ target share in a game where rookie quarterback, Trevor Lawrence, made his NFL debut with 51 pass attempts. To keep up with Kyler Murray and the Cardinals in Week 3, Trevor will likely be at it again through the air in front of a home crowd. Keep in mind Chark missed time in the preseason with a broken finger. His rapport with Lawrence will continue to improve. The two look to get back on track Sunday and fulfill this bold prediction.

Justin’s Breakdown: I know that it’s risky to make a bold prediction for an immediate stand-out performance by a player coming back from a torn ACL. However, the Browns resting OBJ during the first two weeks ensured he’d be able to play at full strength. With Jarvis Landry on Injured Reserve with an MCL injury, there is almost no competition for Beckham. When it comes to targets, he had six or more targets in five of the six games in which he started last year.

The Chicago Bears’ secondary has some warts, but their strong defensive front likely encourages Cleveland to adopt a more pass-heavy game script this week. When healthy, Odell led the team in end-zone targets by a considerable margin, and that should remain consistent following the Landry injury. Here’s for OBJ reminding everyone why he’s still one of the most talented receivers in the NFL!

Michael’s Breakdown: Van Jefferson was on the field for 92% of the Rams offensive snaps last Sunday against the Indianapolis Colts. Three WR sets are the norm for the Rams. When you combine that with the uncertainty of running back, Darrell Henderson’s health, plus throw in the fact that the Tampa Bay Buccaneers stifle the running game, this all melts together into a delicious Van Jefferson chip dip that will taste great all game long. My bold prediction is Van Jefferson having the next big game amongst Rams wide receivers.

Ahaan’s Breakdown: In the first two games this season, Noah Fant has had a significant role in Teddy Bridgewater’s passing game. He’s taken 77% of Denver’s offensive snaps and has recorded a total of 10 catches on 14 targets. In Week 3, he faces the New York Jets. In 2020, no team gave up more receiving yards, receiving touchdowns, and fantasy points to tight ends than the Jets.

The 23-year old Fant should feast in volume and his athletic profile should land him in the end zone at some point on Sunday. Not only do I back this bold prediction, but I’m doubling down as Fant makes my Week 3 Love List, as well.

Lauren’s Breakdown: Daniel Jones finds himself with a dream matchup against the Atlanta Falcons this week.  The Falcons are giving up the most fantasy points to quarterbacks this season; they also allowed the second-most fantasy points to the position in 2020.  Jones is the QB4 through the first two weeks of the season, with much of his value coming with his legs.  He has 122 rushing yards on the season, third-best behind Lamar Jackson and Jalen Hurts.  I like Jones’ sneaky mobility, and expect his legs to find pay dirt this week…twice!

Mick’s Breakdown: Justin Fields will make his first NFL start this weekend in Cleveland against the Browns, much to the chagrin of Ryan Pace and Matt Nagy. The matchup is better than you might think for the rookie quarterback which lays the groundwork for my bold prediction.

Cleveland has had issues containing mobile quarterbacks under defensive coordinator, Joe Woods. In two games against the Browns last season, Lamar Jackson totaled over 600 yards of offense. On top of that, Jackson’s hyper-efficient play produced an average of 10.43 yards per pass attempt and 10.56 yards per rush in those two games.

The Browns did not fare much better last week when they faced Tyrod Taylor. Taylor was nearly perfect, completing 10 of 11 passes for 125 yards and a touchdown. He also ran for a 15-yard score before exiting with a hamstring injury.

Expecting Fields to be as efficient as Jackson or Taylor would be silly, but he does have Allen Robinson at his disposal. I expect him to use his standout athleticism and mobility to gain yards on the ground. Fields should have a reasonable floor in this matchup and can finish as a QB1 this week if he can escape the pocket and make plays with his legs.