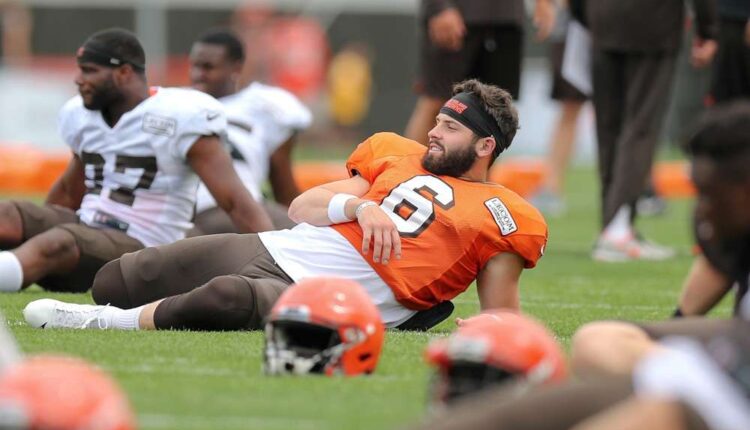 Unless you’ve been on vacation in Antarctica or live in a cave, then you’ve seen and heard some of the hype surrounding the Cleveland Browns in 2019. There are multiple reasons for that hype, from a new coaching staff to multiple player acquisitions that include a pair of Pro Bowlers in Kareem Hunt and Odell Beckham. But the biggest reason for all the optimism surrounding these Browns is that the Browns finally appear to have found their franchise quarterback in second-year pro Baker Mayfield.

As a rookie last year, Mayfield broke Peyton Manning’s touchdown record for first-year passers with 27. He looked every bit the part of a No. 1 overall pick and star in the making.

Now, with an offensive-minded head coach in Freddie Kitchens, a new OC in Todd Monken whose pass-heavy scheme appears to fit Mayfield well and one of the best cadres of passing-game weaponry at his disposal in the NFL, many pundits are expecting a big leap forward from Baker Mayfield in year two.

That’s the problem, though—maybe. Expectations have surged for Mayfield in fantasy—so much so that he’s coming off draft boards fourth among quarterbacks according to early ADP data at Football Diehards—ahead of Aaron Rodgers of the Green Bay Packers and Russell Wilson of the Seattle Seahawks.

Given that lofty asking price, it’s fair to ask if Baker Mayfield is about to become a superstar or a major draft-day bust—whether he’s on the cusp of becoming an elite fantasy quarterback or the hype has reached critical mass and he’s overvalued at this point.

The Talent is There

This much is sure—if you watched Baker Mayfield play at all as a rookie, then his talent isn’t a matter of debate.

In addition to those record 27 scoring strikes, Mayfield threw for 3,725 yards in 14 games, completing just under 64 percent of his passes at a rate of 7.7 yards per attempt with a passer rating of just a hair under 94 and a touchdown-to-interception ratio of plus-13.

By themselves, the stats aren’t that extraordinary. But when you consider that Mayfield was a first-year quarterback playing with a  mostly unproven receiving corps for a team that had gone 0-16 the year before his arrival, they start looking a lot better. Add in the fact that Mayfield was a .500 quarterback (if you count his first game against the Jets, when Mayfield came off the bench) and that he was Pro Football Focus’ eighth-ranked quarterback for the season, and they look better still.

Of course, what fantasy owners are concerned with isn’t PFF grades or even wins—it’s statistical performance and fantasy points. For the season, Baker Mayfield finished just outside the top-15 fantasy quarterbacks in most scoring systems and just inside the top-15 in fantasy points per game. However, the Hue Jackson effect has to be taken into consideration—once Jackson was fired and Kitchens became interim OC, Mayfield was a low-end QB1 the rest of the way. From Week 12 to the end of the season, he was even better than that—eighth at the position in scoring.

As Matthew Florjancic wrote for WKYC-TV, Kitchens believes last year was tip of the iceberg with Baker Mayfield for one prevailing reason—he won’t have anything less than greatness.

The Situation is There

It’s often said that an NFL quarterback is only as good as the talent around him. In Mayfield’s case, here’s hoping it’s true—because at the skill positions at least, the team around him is as good as any in the NFL.

In Beckham, the Browns acquired arguably the league’s most dangerous receiver—a player with four seasons of over 1,000 receiving yards in five years and three campaigns with double-digit touchdowns. Baker Mayfield was fourth in pass attempts of over 20 yards in the air in 2018 and fifth in completion percentage on said passes.

But there’s much more to the Cleveland offense than just OBJ. There’s Jarvis Landry, who came up just short of the 1,000-yard mark last season and posted the second-best yards per reception (12.0) mark of his career. There’s second-year wideout Antonio Callaway, who averaged 13.6 yards a catch and scored five touchdowns as a rookie. An athletic field-stretching tight end in David Njoku. A tailback in Nick Chubb who averaged over 5.0 yards a carry last year and topped 1,100 yards. And another in Kareem Hunt (who is suspended the first eight games of the season) who led the NFL in rushing in 2017.

Other than that, though, there isn’t a whole lot.

Then there’s the coaching staff. In his stint as interim OC last year, Kitchens proved to be equal parts aggressive and innovative, pulling out any and all stops in an effort to create mismatches.

When’s the last time you saw a full house backfield in an NFL game?

Now that he’s BMOC, Kitchens brought in a new coordinator for his offense in 53-year-old Todd Monken. All Monken did in 2018 was serve as the coordinator for a Tampa Bay offense that led the NFL in passing and ranked third in total offense. Monken has spent time as an OC in the Big 12, so he’s well-acquainted in the “Air Raid” spread concepts Mayfield cut his teeth on as a starter.

As Steve Doerschuk wrote for the Canton Repository, while Monken maintains that Cleveland’s offense is a work in progress, he wouldn’t rule out ratcheting up the tempo a notch or seven.

“Do I think (Mayfield) likes to go fast, play in a no-huddle, and be in a shotgun? Yes,” Monken said. “Do I like that? Yes. Will that transfer over? We’re not there yet.”

It’s no wonder fantasy owners are tripping all over themselves to add Baker Mayfield to their teams.

The Value is Not There for Baker Mayfield

That last part is rather the problem with Mayfield—and why he’ll most likely be on very few of my fantasy teams in 2019.

Don’t get me wrong—as I’d think you’d already have gleaned after 1,000 words about why it could happen, I expect Mayfield to have an excellent second season. The Browns are a legitimate threat to win the AFC North, and Brian Sipe’s claim to having the only 4,000-yard passing season in franchise history (1980) is in very real jeopardy.

Mayfield’s 27 touchdowns a year ago tied for fourth-most in franchise history—three off Sipe’s record set that same year.

Just in case you forgot how that one ended, Browns fans. This one hasn’t.

To be fair, this Browns fan is also going to by-God draft Mayfield in at least one league. It’s been the better part of three decades since the franchise had a quarterback that inspired hope instead of nausea. Sometimes it’s OK to think with your heart.

But I’m doing so with my eyes open—with the knowledge that it’s far more likely Mayfield fails to live up to his ADP than exceed it.

Unless you’re playing in a 2QB or “Superflex” league, it’s hard to justify burning an early pick on any quarterback. There’s just too much depth under center relative to the other positions. Many more times than not, the “edge” you get at quarterback won’t be worth the hole you wind up in at running back or wide receiver.

With Baker Mayfield in 2019, it’s that much worse. Not only are you looking at investing an early pick in him, but in doing so you’re drafting a lot closer to his fantasy ceiling than his floor. Last year’s QB5 in leagues that award six points for passing touchdowns was Andrew Luck of the Colts, who passed for almost 4,600 yards and 39 touchdowns. Both of those numbers would shatter franchise records in Cleveland—and Mayfield still wouldn’t quite live up to his draft slot.

About the only way Mayfield can substantially exceed his draft cost (and provide value) is by having a season that challenges not just team records but league ones as well—and banking on that sort of season is begging to be disappointed.

Baker Mayfield is a very good young quarterback who has been put in an excellent position to succeed moving forward. He’s already something of a star, and his ascent has only just begun. He’s going to be a very famous (and very wealthy) man.

But from a fantasy perspective, there are just too many other quarterbacks available significantly later on draft day who offer similar upside—and better value.