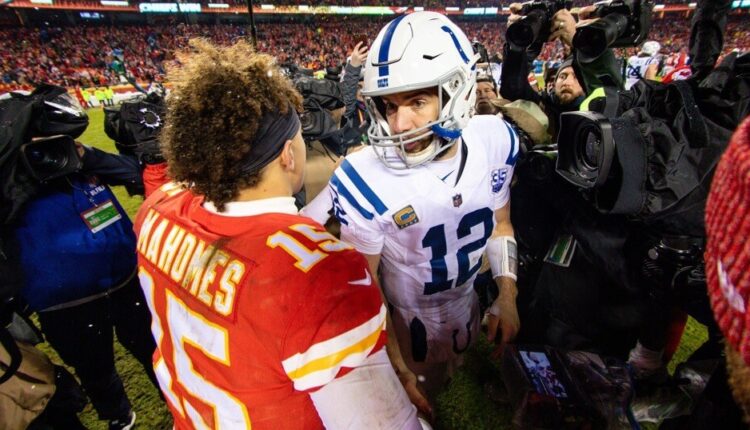 AUTHOR’S NOTE: On August 24th, Luck stunned the NFL by announcing his retirement at the age of 29.

In 2018, Patrick Mahomes of the Kansas City Chiefs had a season for the ages. In his second year in the league, Mahomes became just the second quarterback in NFL history to throw for 5,000 yards and 50 touchdowns in the same campaign. Mahomes won NFL MVP honors and was the MVP of many a fantasy league as well—drafted as a backup by most, he finished the season as the No. 1 signal-caller in NFL.com default fantasy scoring by over 70 points.

In news that should surprise exactly no one, that record-setting season leaves Mahomes as the top quarterback on the overwhelming majority of fantasy draft boards. Per the current ADP data here at Fantrax, Mahomes is coming off the board on average early in Round 3. In many leagues, he’s being drafted even earlier.

But while Mahomes talent is undeniable, the natural regression that follows massive outbursts like his 2018 season and a changing situation in KC lend some credence to the idea that not only will Mahomes not back up last year’s explosion but that he may not even finish as the highest-scoring fantasy signal-caller. That another quarterback coming off a good season of his own with improved passing-game weapons could sneak by Mahomes and into the top spot.

Andrew Luck Bounced Back in a Big Way in 2018

Heading into the 2018 season, there wasn’t a quarterback in the NFL facing more questions than Luck. The No. 1 overall pick in 2012, Luck appeared destined for superstardom before he ever left Stanford. And for the first several years of his career, that upward trajectory continued—Luck set an NFL record with 4,374 passing yards as a rookie, threw 40 touchdown passes in 2014 and guided the Colts to the playoffs in each of his first three years in the league.

But then came an injury-marred 2015 season in which Luck missed nine games. Luck was back under center and topped 4,000 passing yards with 31 scores in 2016, but the following offseason Luck had surgery on his throwing shoulder. Despite continued insistence from the Colts that the injury wasn’t serious, Luck missed training camp. And then the preseason.

And then all of 2017. The entire season was wiped out.

When the Colts started 2018 1-5 and Luck was replaced by backup Jacoby Brissett briefly in Week 3 to attempt a Hail Mary, there were rumblings that Luck’s shoulder wasn’t right; that the quarterback who once seemed a sure thing might never be the same again.

As it turns out, reports of Luck’s demise were greatly exaggerated.

Both player and team caught fire over the second half of the 2018 season. The Colts peeled off nine wins over their last 10 games to finish 10-6, becoming just the third team in NFL history to start a year 1-5 and advance to the postseason. By season’s end, Luck had put together the second-best statistical season of his career on the way to winning Comeback Player of the Year honors. Luck’s 4,593 passing yards ranked fifth in the NFL. His 39 touchdown passes trailed only Mahomes.

Most importantly, Luck finished the year as a top-five fantasy option.

The 2019 Season Could be Even Better

Luck’s 2018 numbers are all the more impressive when you consider that he engineered the NFL’s sixth-best passing attack with a less-than-imposing cadre of pass-catchers. Yes, wide receiver T.Y. Hilton was his usual stellar self, and veteran tight end Eric Ebron had the best year of his career in his first season in Indianapolis. But behind that duo, there wasn’t a whole lot. No one else for the Colts had 500 receiving yards or more than three touchdowns.

General manager Chris Ballard was aggressive in working to change that in the offseason. First, the team added veteran wide receiver Devin Funchess, who joined the Colts after four years in Carolina. Funchess never quite lived up to his draft slot in Carolina, but the 6’4″, 236-pounder amassed a 63/840/8 stat line in 2017 and provides an interesting contrast to Hilton’s speed with his size and physicality.

Per Kevin Hickey of Colts Wire, head coach Frank Reich was impressed by what he’s seen from Funchess in OTAs.

“For a big guy for his size we’ve said he’s got good feet and he’s got good body control,” Reich said. “So, I was just really encouraged by his progress.”

Ballard wasn’t finished. In Round 2 of the 2019 draft the Colts selected burner Parris Campbell, a versatile receiver who piled up 90 catches, over 1,000 yards and 12 touchdowns catching passes from Dwayne Haskins at Ohio State in 2018.

As Andrew Walker wrote for the team’s website, offensive coordinator Nick Sirianni can’t wait to get Campbell and his 4.31 speed on the field with Hilton.

“You know, I think when you get the type of speed that Parris has, that’s just something that you can’t replicate when you’re a defensive coordinator,” he said. “They’re not going to be able to throw anybody out there and say, ‘Hey, run really fast.’ That’s just … not everybody can do it. So, the defense is gonna to see a different type of speed every Sunday with him out there with the addition of Parris to the other guys that we have on the offense.”

Add in a capable third-down back in Nyheim Hines, the return of veteran tight end (and Luck favorite) Jack Doyle and an offensive line that allowed an NFL-low 18 sacks last year, and the Colts now boast passing-game talent that compares favorably with the most potent groups in the league—including the Chiefs.

Patrick Mahomes Is Going to Regress in 2019

Mahomes deserves every accolade and attaboy he received after his phenomenal sophomore season. To say that he has a bright future is the understatement to end all understatements.

He’s also all but certainly going to take a step backward statistically in 2019 as I laid out in this article.

As Fantrax’s own Mike Florio reported back in early April in his look at Mahomes, there have been 11 5,000-yard passing seasons in NFL history–if you count Mahomes and Ben Roethlisberger of the Pittsburgh Steelers last year. In all nine in which we have data for the following season, that quarterback’s passing yardage declined the following year.

Every time. Without fail.

Four of those nine 5,000-yard seasons were followed by a decline in yardage of at least 13 percent. The average drop-off was a bit over nine percent—a decrease of just under 500 passing yards on average.

The free-fall for quarterbacks who throw 50 touchdown passes in a season is that much more drastic. Granted, it’s only happened twice before Mahomes did it—Tom Brady in 2007 and Peyton Manning in 2013. But in Brady’s next full season after tossing 50 scores (he missed almost the entire 2008 season with a torn ACL) he threw 28 touchdown passes. Manning fell from 55 in 2013 to 39 the following season.

That’s an average decline of over 36 percent.

If Mahomes loses even 30 percent of his touchdown production from last year, that would drop him to 35 scores—four fewer than Luck had in 2018.

And that’s without even mentioning that Mahomes will more than likely be without top receiver Tyreek Hill for a significant portion of the 2019 season. There’s that, too.

Now, this isn’t to say that Mahomes won’t have a very good season in 2019. Or that Luck’s going to pile up 5,000 passing yards or 50 touchdowns. But with improved weapons at his disposal and another year in the offense under his belt, it’s not that hard to imagine Luck at least backing up his 2018 numbers—if not bettering them slightly.

Given what history’s shown us, it’s that much easier to imagine that Mahomes isn’t going to enjoy the sort of statistical success he did in 2018. That level of production just isn’t sustainable.

And if those things happen, the supposedly foregone conclusion about who will be fantasy football’s No. 1 quarterback may not be so cut-and-dried after all.

Would you draft Andrew Luck over Patrick Mahomes? For more from Gary check out his full archive for more great rankings and analysis.