Hopefully, this last update catches you in time. Though many drafts are done, I’ve found that the people who play in deep AL- and NL-Only leagues tend to wait as long as possible to draft. I know I’ve got my two favorite keeper leagues the weekend after the season starts. It’s a really good thing this year as there have been so many late signings and roster moves. So hopefully my AL-Only Rankings and Auction Values find you in time to help.

If the senior circuit is your bag here are my NL-Only Rankings and Auction Values.

Getting Ready for your Draft or Auction

We’re gonna go position by position as we look at the rankings and auction values. I do not have them listed in an overall rankings format. You can use the dollar values to compare players among different positions. If you’re like me and want a piece of paper in hand to check names off, or you need to take it to an in-person draft, then here is a Printable AL-Only Cheat Sheet with Auction Values.

You might also want to print out my Position Eligibility Cheat Sheet as well. It shows the number of games played by position for every player who appeared in the Major Leagues in 2018. Of course, you can always use our online position eligibility tool as well. It works great on a laptop or cell phone and all you have to do is type a player name in and the games played data will pop right in.

Oh, one more thing. You’re going to nitpick my rankings and values. I understand. I do it. Hell, I’ve done it 15 times while writing this article. I get it. I would expect nothing less. Here’s what I’ll say about it though. If you’re in an AL-Only auction it means you are probably pretty advanced. You are your own expert… or at least you should be. Hopefully, I’ve helped you with a starting point and some solid tools, but in the end, you are the one who gets to brag or sulk at the end of the season. You be you.

Before we get to the specific auction values I want to remind you of one key aspect of fantasy baseball auctions. These values are pre-auction. Once players are purchased all the values begin to change with each over or under bid. I cover a lot of this in my auction strategy articles (Basic Auction Strategy and Deep League Auctions). Just realize that each auction takes on a life of its own and your strategy and auction values have to go with the flow.

You’ll also probably find out that my values on star players are too low to roster most of them. If we were talking mixed league auctions here, I’d say go the extra amount, but if you do that in an NL-Only auction you’re going to end up with holes. Holes hurt. I am a huge believer in Spread the Wealth for NL and AL-Only auction leagues. It’s fun to own Ronald Acuna and Trea Turner, but it’s more fun to win. A balanced and deep roster is how you win.

*You can click on any of the rankings tables below to see a full sized image.

The catching position is a barren wasteland in AL-Only leagues. While position eligibility is overrated in most cases, spending the extra dollar for Gary Sanchez might not be a bad idea. He’s the only AL backstop with anything close to real upside. The one thing I try not to do is end up with two absolute zeros. Ideally, I’ll partner an underrated Welington Castillo with an option like Jonathan Lucroy or Omar Narvaez who won’t hurt you. I like Danny Jansen in that mode, but it seems like many people view him as something more.

First Base Rankings and Values

First base, in general, lacks elite bats but is pretty deep in useable pieces. I have Luke Voit valued relatively low, but I do like him as one of the more affordable options that still has plenty of obvious room to pay off. I’m also starting to get more comfortable with the idea of a Miguel Cabrera resurgence, at least on a moderate scale. I’ve also taken quite a few shots on Ronald Guzman, whose minor league numbers suggest could hit for a much better average than he did in his rookie season.

Second Base Rankings and Values

Second Base is another position where the AL lags behind the NL. I love the top with Jose Altuve and Whit Merrifield, but it thins out quickly after that. Jonathan Villar may offer the best combination of upside and value in many leagues. As far as the lower end, I’m starting to feel better about playing time for Brandon Lowe. The Rays just signed him to a new contract after just 148 plate appearances. That tells me they are going to find him at-bats one way or another. I wouldn’t expect him to hit much above .250, but there’s definitely 25-HR type power in his bat.

Third Base Rankings and Values

Am I just too high on Miguel Andujar? His rookie numbers were outstanding and I don’t see anything in his peripherals that says they were a fluke, yet he falls a lot further in many drafts than he should. The good news is you can probably get Miguel Sano cheaper than the $11 I have him pegged at. The bad news is there’s a reason. I’m still taking a shot at him before the ugly bottom tier of AL third basemen.

Obviously, Alex Bregman will be playing third for the Astros, but for this year at least we have the option of slotting him in at short. After looking at the AL third basemen I’m thinking it may be better to keep him at third. Your choice. Adalberto Mondesi is the real wild card. I’m not sure he’ll hit over .250, but I’m also not sure he won’t steal 50 bases anyway. The Royals are going to let him run at every opportunity. If you want to wait on shortstop, one tactic that might work is pairing up Troy Tulowitzki and Didi Gregorius. Both are going very cheap and both have good upside. Not sure Tulo can make it more than three weeks healthy, but it’s an interesting idea. 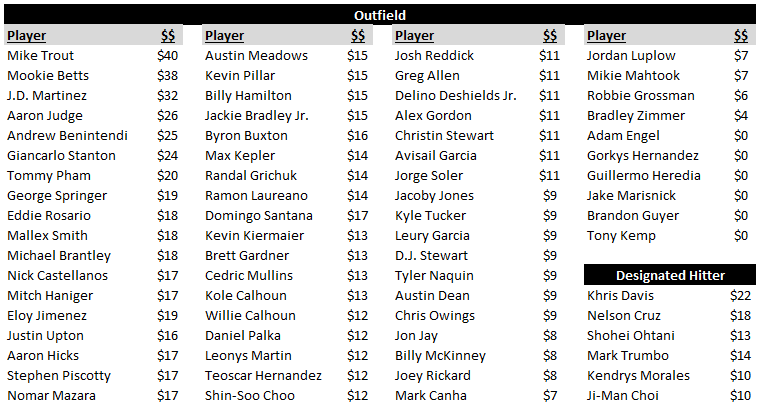 That top tier of outfield is juicy, but you’re going to make your profit after that. The values I like are Domingo Santana, Teoscar Hernandez, and Greg Allen.  Austin Meadows is another outfield bat I like to produce quiet double-digit steals/homers. 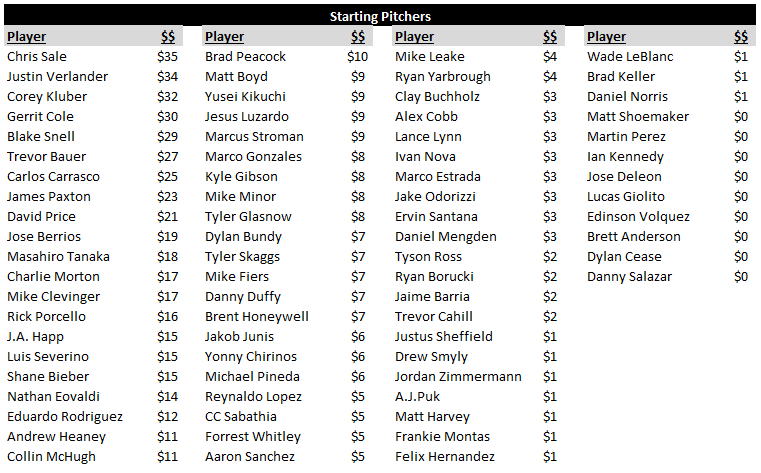 I think to win an AL-Only league you almost have to have at least one of the seven top starting pitchers. There’s just no way to make up for that type of production if you don’t. I like grabbing one of them and then filling in with solid pitchers who may just lack innings. Brad Peacock, Jesus Luzardo, and Justus Sheffield come to mind. There’s also a chance to steal some second-half upside in the form of Tommy John returnees A.J. Puk and Brent Honeywell. I’d honestly rather go with them than most of the lower ranks of current starting pitchers.

I strongly encourage you to grab at least one of the top 4 options. Maybe it’s just because I’ve apparently been burned by Corey Knebel and Archie Bradley in the NL, but I want at least one “safe” closer as a base. I also love Chad Green and Ryan Pressly as values in AL-Only leagues. Their strikeouts approach that of lesser starters and their ratios are going to be elite. I don’t care if it’s only in 75 innings, I take that every day of the week.

You buying in on Doug’s NL-Only Rankings and Auction Values? For more great rankings, strategy, and analysis check out the 2019 FantraxHQ Fantasy Baseball Draft Kit. We’ll be adding more content from now right up until Opening Day!